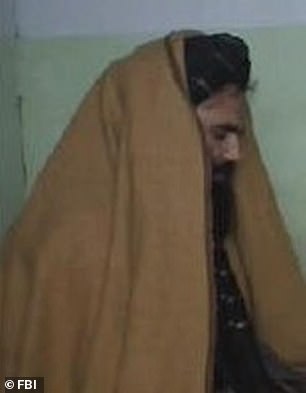 The New York Times is being criticized for allowing Sirajuddin Haqqani (pictured), the deputy leader of the Taliban to write an op-ed

The New York Times has come under fire for publishing an op-ed written by the deputy leader of the Taliban who is one of the world’s most wanted militants.

In the article, headlined ‘What We, the Taliban, Want,’ Sirajuddin Haqqani claimed that ‘we are about to sign an agreement with the United States and we are fully committed to carrying out its every single provision, in letter and spirit’.

The article represents the highest-level statement from the group after months of negotiations with the US, and comes as they are believed to be days away from signing an agreement that would see America begin to withdraw troops from its longest war.

But the article was immediately met with criticism, including from the Times’ Afghanistan correspondent Mujib Mashal who blasted the newspaper on Twitter.

‘The piece by Siraj Haqqani in @nytopinion – which’s independent of our news operations & judgment – omits the most fundamental fact: that Siraj is no Taliban peace-maker as he paints himself, that he’s behind some of most ruthless attacks of this war with many civilian lives lost,’ Mashal wrote.

Mashal said it’s even worse knowing ‘what our news reporting has on Siraj Haqqani, and what the Haqqani Network is accused of over the years’.

He then gave samples of the Times’ reporting on Haqqani. Others also criticized the Times over the opinion piece.

In the article, headlined ‘What We, the Taliban, Want,’ Haqqani claimed that ‘we are about to sign an agreement with the United States and we are fully committed to carrying out its every single provision, in letter and spirit’

But the article was immediately met with criticism, including from the Times’ Afghanistan correspondent Mujib Mashal who blasted the newspaper on Twitter 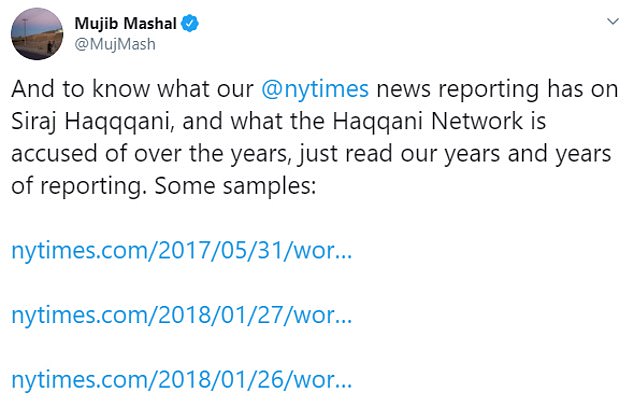 ‘Appalled @nytimes has given leader of the Haqqani network and leader in Taliban room in their editorial pages to espouse his views. Haqqani network is responsible for 1000s of Americans killed in Afghanistan and provides shelter to al Qaeda operatives… they sheltered Bin Laden,’ Congressman Jim Banks tweeted.

Another user wrote: ‘Remember: NYT wouldn’t take an oped from John McCain, but they’ll take it from commanders of the Taliban, Hamas and others.’

‘OH MY GOD! 2 HOURS AGO The New York Times published an opinion piece by Deputy Leader of the Taliban, presenting him as a leader with a genuine cause. He’s a globally designated terrorist with the US government offering a $10M for his arrest!!!’ Imam of Peace tweeted.

The Washington Examiner’s Beckett Adams shared: ‘… is it weird that the New York Times published an op-ed by a Taliban officer?’

Adams then said one of Haqqani’s quotes felts ‘like a leaflet flyover’.

It is believed to be the first time that Haqqani – who doubles as head of the Haqqani network, a US-designated terror group that is one of the most dangerous factions fighting Afghan and US-led NATO forces in Afghanistan – has given such a lengthy statement in English.

Previously he has communicated mainly through rare audio messages, usually in Pashto. The most recent one on a Taliban website was dated June 2017.

In the article, Haqqani said the ‘long war has exacted a terrible cost from everyone’.  The leader of a group known for masterminding some of the most deadly attacks during the war and the frequent use of suicide bombers also says he is ‘convinced the killing and the maiming must stop’.

Others also criticized the New York Times over the opinion piece 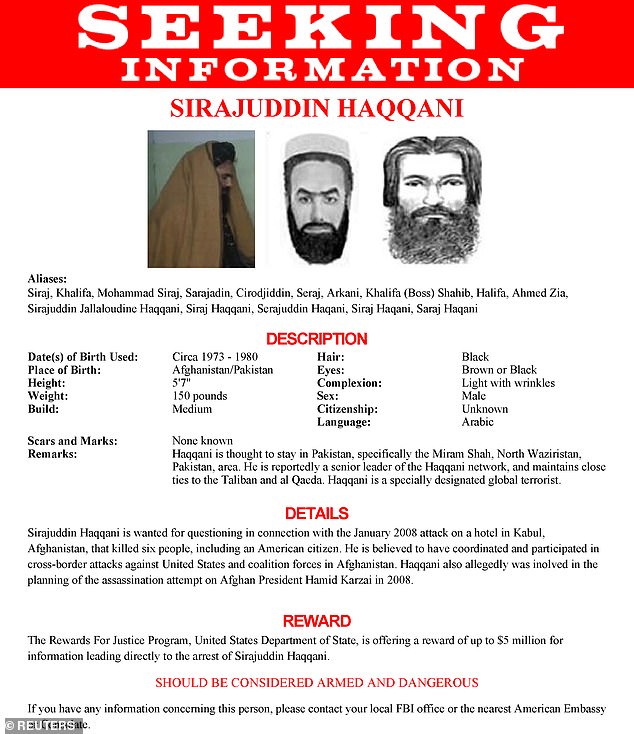 This image gives details about the Haqqani and what he’s wanted for, including the January 2008 attach on a hotel in Kabul, Afghanistan, that killed six people, including an American citizen

‘For more than four decades, precious Afghan lives have been lost every day. Everyone has lost somebody they loved. Everyone is tired of war.

‘We did not choose our war with the foreign coalition led by the United States. We were forced to defend ourselves.

‘The withdrawal of foreign forces has been our first and foremost demand. That we today stand at the threshold of a peace agreement with the United States is no small milestone,’ he wrote.

Haqqani repeats many Taliban talking points from the negotiations, including how women would have rights ‘granted by Islam’ – the problem being, as many observers have pointed out, the group’s repressive interpretation of the faith.

The Taliban banned women from education and work and only let them leave their homes in the company of a male relative.

Overnight, women disappeared behind the all-enveloping burqa, their activities restricted to their homes.

The Taliban have been conducting direct talks with the US since 2018 on a deal which would see Washington begin pulling troops out in return for security guarantees from the militants and a promise to begin peace talks with the government in Kabul. 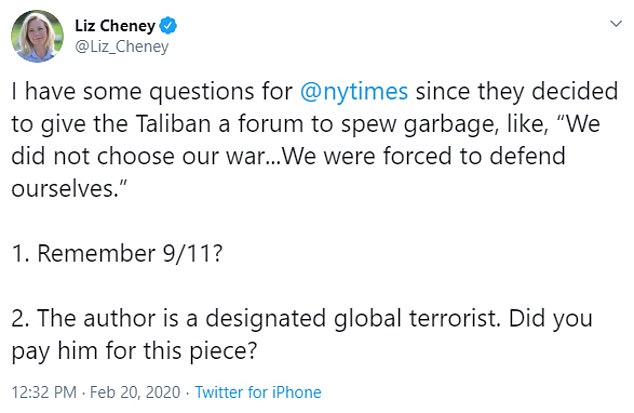 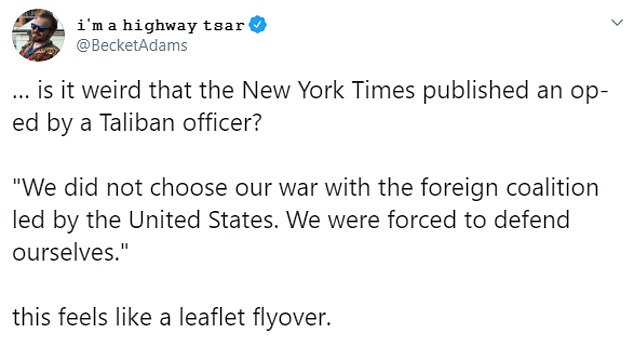 The agreement could come as soon as February 29, though no date has yet been made public.

But he also admitted that the group is ‘aware of the concerns and questions’ over any potential Taliban return to power.

Many Afghans have voiced anger at being sidelined from the talks, and resistance to returning to life under the militants’ repressive regime – though many others simply want security and for the violence to end.

‘My response to such concerns is that it will depend on a consensus among Afghans,’ Haqqani writes, adding that the Taliban was ready to agree on ‘a new, inclusive political system in which the voice of every Afghan is reflected and where no Afghan feels excluded’.

He also states that concerns about Afghanistan being used by foreign militant groups to ‘threaten regional and world security’ are ‘inflated’.

The US invaded Afghanistan after the 9/11 attacks on the World Trade Center and the Pentagon by Al Qaeda, who were guests of the Taliban at the time.

One of the promises believed to be included in the deal is for the Taliban to ban any foreign militant groups on Afghan soil.

The Afghan presidential palace also reacted strongly to the article.

‘It is sad that the (New York Times) has given their platform to an individual who is on a designated terrorist list. He and his network are behind ruthless attacks against Afghans and foreigners,’ Sediq Sediqqi, a palace spokesman, told Reuters.

Russia to see public holiday amid country's biggest spike in Covid-19 infections, now totaling 658
Company director, 41, told how removing EGGS from his diet helped him to find love
'At least 18 dead' after 'gunman armed with an assault rifle' opens fire at a Walmart in El Paso
First landing of RAF's £100million F35 stealth fighter jet on warship
Fears of further bloodshed in Iran as Supreme Leader brands protesters 'thugs'
Female pedestrian, 21, is mowed down and killed by police car
Paedophile hunter who caught a child sex offender by making a 'citizen's arrest' goes on trial
Ipswich water bosses' fury as Yorkshire puddings block sewer after being flushed down toilet