A senior NHS doctor is fighting for life after being infected with coronavirus, which may have happened during a routine appointment with a patient.

The 52-year-old ear, nose and throat consultant from the Midlands had been ‘fit and well’ but was last night on a life-support machine.

News of the medic’s plight came as NHS colleagues warned many more staff will fall ill – or even die – from coronavirus because of a chronic shortage of protective equipment. 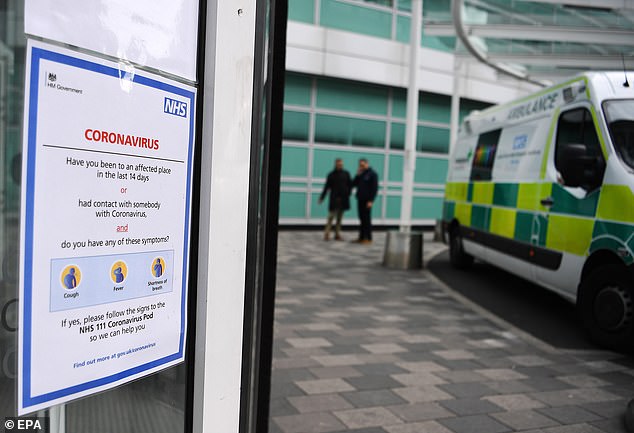 A senior NHS doctor is fighting for life after being infected with coronavirus, which may have happened during a routine appointment with a patient. Pictured: A coronavirus public notice sign outside a London hospital 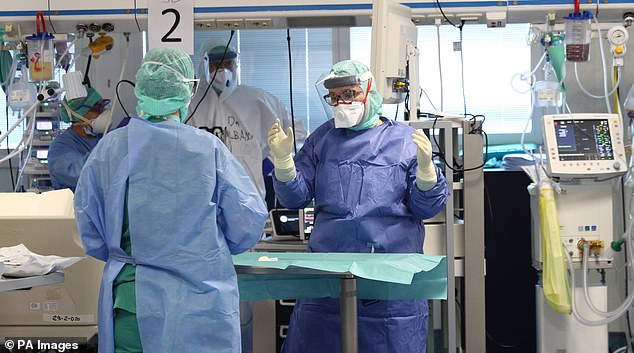 Meanwhile, hospitals were scrambling to avoid meltdown amid a ‘tsunami’ of severely ill patients, many of them struggling to breathe.

And in a stark illustration of the desperate hunt for life-saving kit, health bosses have been forced to ask vets for ventilators designed for animals.

Angela and Robert Walsh, who own Corner House Equine Clinic in Henley-in-Arden, Warwickshire, said their local hospital had got in touch to ask about ventilators. Writing on Facebook, Mrs Walsh said: ‘This brings home how serious this pandemic is. Never before have the vets of Britain been asked to provide equipment for humans.’

Mrs Walsh told The Mail on Sunday that Christine Middlemiss, the UK’s Chief Veterinary Officer, has written to every vet in the country asking for an inventory of their respiratory equipment. 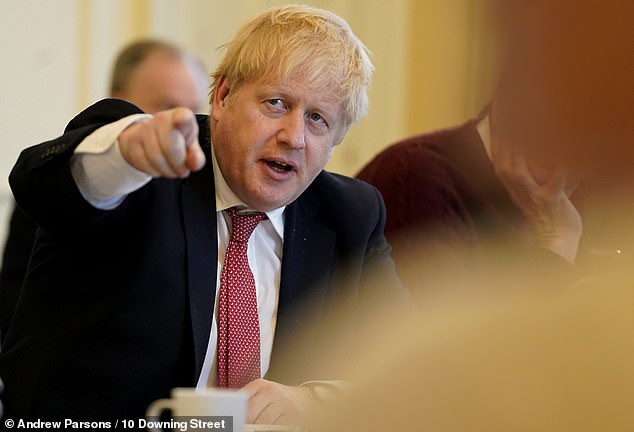 Hospitals were scrambling to avoid meltdown amid a ‘tsunami’ of severely ill patients, many of them struggling to breathe. Pictured: Boris Johnson in a coronavirus cabinet meeting today 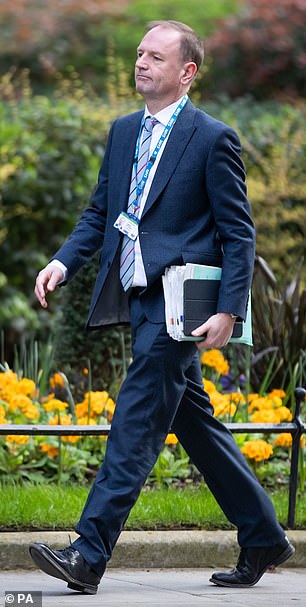 NHS chief executive Simon Stevens (pictured) yesterday announced an ‘unprecedented deal’ which will see private hospitals hand over their entire England-wide capacity of over 8,000 beds and 1,200 ventilators to the health service

In hospitals, operating theatres are being frantically converted into intensive care wards and regular patients are being discharged to make way for a massive surge in coronavirus cases.

NHS chief executive Simon Stevens announced an ‘unprecedented deal’ which will see private hospitals hand over their entire England-wide capacity of over 8,000 beds and 1,200 ventilators to the health service. The NHS will pay ‘cost price’, so private hospitals will not make a profit.

Official figures seen by this newspaper show that at midnight on Thursday, 163 Covid-19 patients were being treated in critical care units across England – 106 of them in London. Of those, 70 per cent were men and only one in ten had severe underlying health problems. London is so far the hardest pressed area. One hospital, Northwick Park in Harrow, briefly ran out of intensive care beds on Friday.

Elsewhere in the capital, doctors – including those at some of the country’s most prestigious hospitals – admitted they may be only days away from the same fate.

One consultant at a major Central London hospital told The Mail on Sunday: ‘What’s going on up the A40 at Northwick Park is going to land right smack in our face.

‘Our whole hospital is pandemonium. It’s managing, but it’s about to stop managing.’

Hundreds of coronavirus patients are now being treated in hospitals across London, where around half of the 233 deaths have been. Pictured: Medics outside a London hospital

As the epidemic gathers pace in London and spreads across the rest of the country, he predicted similar problems elsewhere. ‘Northwick Park will invariably happen in each hospital, one by one. We are expecting this because of what’s happened in Italy and Spain.’

Hundreds of coronavirus patients are now being treated in hospitals across London, where around half of the 233 deaths have been.

An intensive care specialist in South London predicted grimly: ‘A tsumani is coming soon and there will be a time when we won’t be able to help everyone who needs an intensive care bed.’

He added, however, that staff were making ‘a superb effort’, adding: ‘I think it’s fair to say we have saved around a dozen patients’ lives in the last week, who wouldn’t have made it but for our work.’

The National Institute for Health and Care Excellence (NICE) yesterday issued updated treatment guidance that said those deemed ‘mildly frail’ or worse could be denied intensive care because they have the lowest chance of surviving. Those with better underlying health should be prioritised.

In Italy, almost a tenth of patients in hospital with the virus have been healthcare workers – a statistic that has sent a chill down the spines of NHS medics.

The Italian experience shows it is not just those treating Covid-19 patients who are at risk, but also those working elsewhere in hospitals – many of them with less protection. The Central London consultant, who does not work in intensive care, said: ‘I have major concerns about our safety, not only for our own sakes, but because if we can’t function, we can’t look after people. I work in a very high profile trust in Central London and currently many staff have no personal protective equipment [PPE].

‘My colleagues are telling me, “Forget PPE. There’s not even basic normal surgical masks, hand wash and hand gel in many areas where it’s really needed.”’

He said one NHS worker had been reduced to ‘driving around B&Qs buying up dust masks’ because no facemasks had been provided at work. ‘It’s like sending us to put out a huge fire wearing no protective equipment, while asking every else to stay at home,’ the consultant added. Dr Lisa Anderson, a consultant cardiologist at St George’s Hospital in South London, said staff risk ‘cross-infecting everybody’ due to the lack of kit. She said the equipment the NHS was handing out did not meet World Health Organisation guidelines.

It is feared the stricken ear, nose and throat (ENT) doctor may have picked up the virus through a routine appointment while not wearing PPE. Mark Watson, president of the British Laryngological Association, wrote to members: ‘It does appear that ENT specialists are particularly prone to virus exposure, and we have two examples of severe infection within the UK: two ENT consultants have required intensive care unit admission this week.’

And in a stark illustration of the desperate hunt for life-saving kit, health bosses have been forced to ask vets for ventilators designed for animals. Pictured: People wear protective face masks outside Northwick Park Hospital in London

Mr Watson told The Mail on Sunday that the most seriously ill doctor was on an ‘artificial lung’ machine. The other consultant, in his 40s and from Yorkshire, is on a ventilator but is improving.

Patrick Magennis, chairman of the British Association of Oral and Maxillofacial Surgeons, said doctors should wear heavy-duty protective kit, including a sealed mask, before ‘close face-to-face contact’ with any patient.

‘To do otherwise is to be playing a very high risk health lottery,’ he warned.

Meanwhile, the Confederation of British Surgery has called for all plastic surgery to cease. Founding member Mark Henley said surgeons are at ‘an increased risk during these hazardous times’.