Nicola Sturgeon today issued a fresh rallying cry for Scottish independence as she claimed the SNP is ‘winning the case’ for a split from the rest of the UK.

The Scottish First Minister told activists at the SNP’s annual conference in Aberdeen that ‘it is time to take charge of our own future’ as she said Scotland had a ‘cast iron mandate’ for a second referendum.

She then reiterated her demand for a second vote on independence to take place no later than next year.

Ms Sturgeon also used her address to launch a series of attacks on Boris Johnson‘s ‘disastrous’ Brexit strategy as she insisted that a No Deal divorce from the EU would be ‘unthinkable’.

The SNP’s bid to secure Scottish independence failed in 2014 as voters backed staying part of the UK by 55 per cent to 45 per cent.

But Ms Sturgeon has repeatedly called for a re-run of the poll and believes that the 2016 Brexit vote when Scotland voted to Remain in the bloc could shift the polls in her favour. 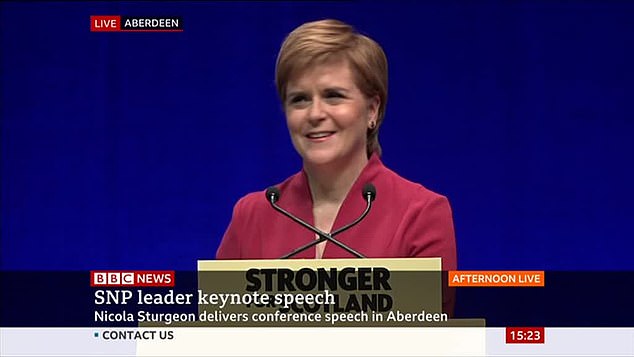 She said: ‘These can seem like dark times. But there is light and there is always hope. Progressive values are being fought for in Europe.

‘Young people are taking a stand for their future. And for Scotland, the hope lies in becoming an independent nation.

‘Be in no doubt about this. We are winning the case for independence.’

‘It is time for independence.’

Ms Sturgeon claimed the SNP would secure Scottish independence by ‘inspiring and persuading’ people rather than through the ‘Brexit way’ of ‘undermining democracy’ and ‘demonising those who disagree’.

Attacking Mr Johnson’s Brexit plan, Ms Sturgeon said that any form of leaving the EU would be a ‘disaster’ as she accused the PM of caring ‘nothing for the human consequences of his disastrous’ divorce policy.

‘We don’t yet know whether the UK will leave with a deal or without,’ she said.

‘But we do know that neither of these outcomes is in Scotland’s interests. A no deal Brexit is unthinkable.

‘And for the Scottish Tories in particular to back such an outcome is simply unforgivable.’

She also claimed that Brexit had illustrated that the ‘Westminster system is… broken utterly beyond repair’ because despite the fact that Scotland voted to Remain it is now on course to be taken out of the EU against its will.

Ms Sturgeon said Brexit illustrated why Scotland should be allowed to vote again on whether or not to become an independent nation.

‘We have a cast iron mandate for an independence referendum,’ she said.

‘That fact is beyond doubt. But we don’t just have a right to offer the people of Scotland a choice over their future.

‘In the circumstances now Scotland faces, we have a duty to do so. And it is what we intend to do.’

Boy, 15, is stabbed in the FACE in brutal north London street fight in weekend of mayhem
LFW: Arizona Muse cradles bump as she joins Olga Kurylenko and Helen McCrory for Temperley catwalk
'Horrible experience but we're ok now': Dele Alli speaks out after knifepoint robbery at £2m mansion
Supergran Doria Ragland is fixture at Meghan's side after 'signing up baby expert'
Speculation over where Harry and Meghan will live after quitting Royal Family
Harry and pregnant Meghan speak at Invictus Games closing ceremony
Coronavirus UK: Weekend and staggered shifts after lockdown
Wives and girlfriends including Perrie Edwards join the Liverpool celebrations