Nigel Farage‘s new Brexit Party will run candidates at the next general election, the Leave campaigner has said.

Mr Farage said he would use next month’s European Parliament elections as a ‘springboard’ to challenge for seats at Westminster.

His newly founded party – established after his break with UKIP – has come first ahead of Labour and the Conservatives in some opinion polls.

The next general election is not due until 2022 but the fragility of Theresa May’s government has led to ongoing speculation of an earlier poll. 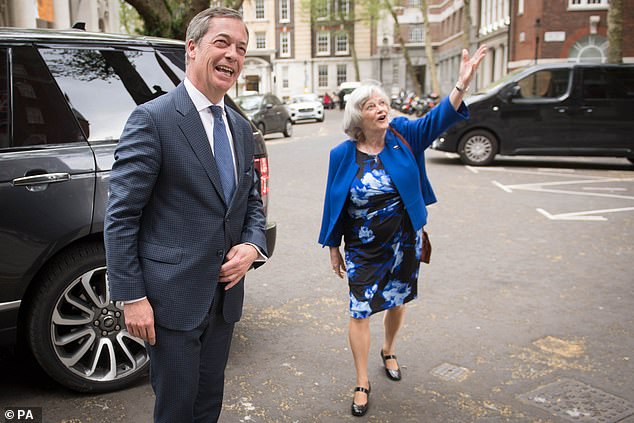 Nigel Farage ‘s new Brexit Party will run candidates at the next general election, the Leave campaigner (pictured with Ann Widdecombe in London yesterday)  has said

Speaking to The Sun, Mr Farage said: ‘We want the European election to be the first step of a massive change that resteps entirely British politics and actually makes it look more like the country.

‘MPs will realise that if they carry on trying to stop Brexit, they’ll lose their seats at the next General Election. I think they will be very fearful of what the Brexit Party can do to them.

‘That’ll give them two choices – either they change and start to deliver Brexit, or we’ll replace them at that General Election.’