The Nigerian army cited a video of Donald Trump to justify opening fire on a to justify its fatal shootings of rock-throwing protesters this week.

On Friday, the army’s official Twitter account posted the footage of the US President with the caption: ‘Please watch and make your deductions’.

In the video, Trump warns that soldiers deployed to the Mexican border could shoot Central American migrants who throw stones at them while attempting to cross illegally.

‘When they throw rocks… consider it as a rifle,’ Mr Trump says in the clip 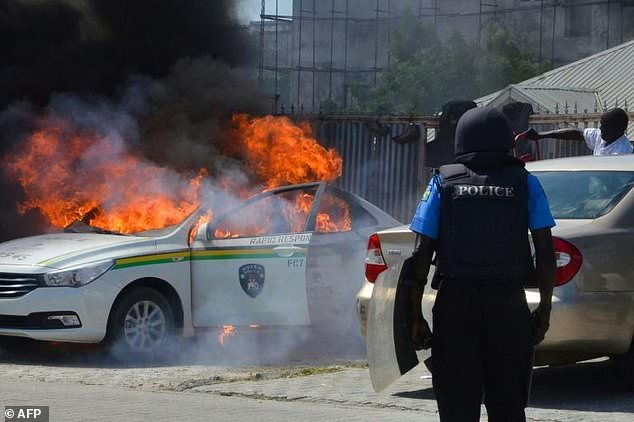 An army spokesman said the demonstrators were armed with stones, petrol bombs, machetes and knives

‘We’re not going to put up with that. They want to throw rocks at our military, our military fights back.’

Nigeria’s defence spokesman John Agim said the army posted the video in response to criticism that its security forces had acted unlawfully.

The Islamic Movement of Nigeria (IMN) said 49 of its members were killed after the army and police fired live bullets at crowds who marched near and in the capital Abuja. The army’s official death toll was six.

Amnesty International said Wednesday it had ‘strong evidence’ that police and soldiers used automatic weapons against IMN members and killed about 45 people in an ‘unconscionable use of deadly force by soldiers and police’.

The US embassy in Nigeria said Thursday it was ‘concerned’ and called for an investigation.

Agim said: ‘The video was posted in reaction to the Amnesty International report accusing the army of using weapons against pacifist Shia protesters.

‘Not only did they use stones but they were carrying petrol bombs, machetes and knives, so yes, we consider them as being armed.

‘We intervened only because the IMN members are trying to harm our people, they are always meeting us…at security check points and trying to provoke us, they even burned a police vehicle.’

Nigeria, Africa’s largest economy, is almost evenly split between a mostly Muslim north – which is predominantly Sunni – and a largely Christian south.

Experts have warned the government that a heavy-handed response to the group risks sparking conflict in a volatile region where poverty is widespread.

IMN leader Ibrahim Zakzaky has been in custody since 2015, when an army crackdown killed 300 of his supporters who were buried in mass graves, according to rights groups.

Zakzaky is facing a culpable homicide charge in connection with the 2015 violence. He remains in jail despite a court order granting him bail.

On Thursday, 120 of 400 IMN members arrested by police on Monday were charged with ‘rioting, disturbance of public peace and causing hurt,’ said a court official in Abuja on Friday.

According to court documents seen by AFP, the IMN members had been ordered to disperse but they ‘refused and started throwing stones at the police officers and other members of the public and thereby caused them bodily harm’.

All the suspects pleaded not guilty and were granted bail with the court hearing to resume on December 5.