Philip Hammond warned yesterday that the Prime Minister’s plan to end austerity could be cancelled if Britain leaves the EU without a Brexit deal.

The Chancellor is expected to use today’s Budget to loosen the purse strings with a raft of spending pledges and a promise to bring forward a rise in income tax thresholds to next year.

He will tell voters that the ‘fruits of their hard work are now at last in sight’ after a decade of restraint.

However, in comments that risked angering Brexiteers, Mr Hammond yesterday warned that he would be forced to rip up his Budget in the event of a no-deal Brexit. 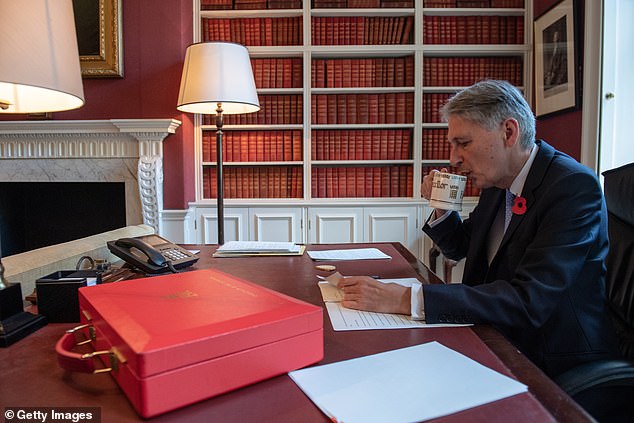 ‘If we don’t get a deal, if we were to find ourselves in that situation then we would need to take a different approach to the future of Britain’s economy,’ he told Sky News’s Sophy Ridge on Sunday.

‘We would need to look at a different strategy and frankly we’d need to have a new budget that set out a different strategy for the future.’ Asked if austerity would still end under a no-deal scenario, he said: ‘We would have to wait and see what the situation was. If we left the European Union without a deal we would want to see how markets and businesses and consumers responded to that.

‘And then as any responsible government would we would take appropriate fiscal measures to protect the economy, to prepare us for the future and to strike out in a new direction that would ensure that Britain was able to succeed whatever the circumstances we found ourselves in.’

Mr Hammond said the country would need to make ‘a very big transition’ to how it operates, as he hinted that it could move towards a Singapore-style low-tax, low-regulation economy.

‘If our businesses are no longer able to trade with European Union neighbours, if their supply chains are cut off, they will have to find different markets and different ways of doing business,’ he told the BBC’s Andrew Marr Show. ‘The economy will change. It will have to restructure itself over a period of time and that will be a fairly major transition.’

Mr Hammond – whose spending pledges are also expected to include extra cash for an extension of superfast broadband to remote rural areas and a temporary cut in business rates for small firms – indicated that further spending commitments would have to wait until the outcome of the Brexit negotiations is clear.

‘Once we get a good deal from the European Union and the smooth exit from the EU, we will be able to show the British people that the fruits of their hard work are now at last in sight,’ he told the BBC.

‘What I will be doing is setting out a path of public spending… but the detailed allocation to different departments is something that is for next year.’

Mr Hammond’s suggestion that promised extra spending on public services and cuts to income tax are conditional on getting support for Theresa May’s Brexit deal could annoy some hardline Eurosceptics who are opposed to her plan.

However, Tory MP Jacob Rees-Mogg welcomed the suggestion that no deal would lead to an overhaul of the economy.

He told Sophy Ridge on Sunday: ‘This doesn’t sound like George Osborne’s punishment budget. Do you remember that we were going to get a punishment budget immediately after the referendum if we had the audacity to vote to leave?

‘This sounds like an approach where policy decisions would be made to embrace Brexit and I’d be very much in favour of that being done on Monday rather than waiting a few months. I think we should be making announcements now about how we would deal with leaving on World Trade Organisation terms.’

In her speech to the Tory party conference earlier this month, Mrs May pledged to end austerity. ‘Debt as a share of the economy will continue to go down, support for public services will go up,’ she said.

‘Because, a decade after the financial crash, people need to know that the austerity it led to is over and that their hard work has paid off.’