He’s been at loggerheads with his brother Noel Gallagher for several years, most recently stating his desire to ‘break his jaw’ in a spat over the use of Oasis songs.

And Liam Gallagher found himself on the receiving end of a vitriolic outburst over the weekend, when Noel’s wife Sara Macdonald branded him a ‘fat t**t’ and ‘dated tribute act in an online rant ahead of his Saturday night performance at Glastonbury.

On Friday night, Sara took to her private Instagram account to praise the day’s headliner Stormzy, before answering a follower’s enquiry on whether she’d be staying at the festival to watch brother-in-law Liam take the stage the following day. 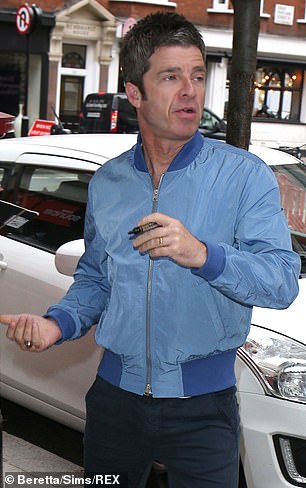 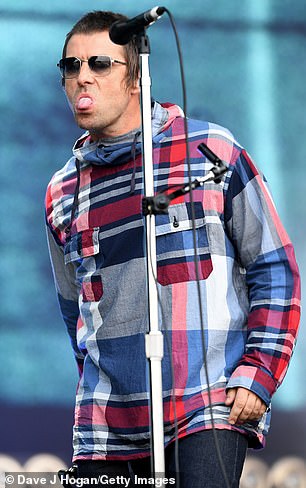 The feud continues: The feud between Noel Gallagher, left, and his brother Liam, right, was reignited over the weekend, when Noel’s wife branded Liam a ‘fat t**t’ and ‘dated tribute act

Showing she’s not one for mincing words, she responded: ‘Think I’m going to swerve that. The fat t**t doing his tribute act, balancing a tambourine on his head is going to look pretty dated after Stormzy.’

A screenshot of the exchange has since been widely circulated on the internet, likely adding more fuel to the stars’ seemingly endless feud.

MailOnline has contacted representatives for Liam and Noel Gallagher for comment.

Despite the lack of support from his brother, Liam ensured all eyes were on him as he took to Glastonbury’s Pyramid Stage on Saturday, with his girlfriend Debbie Gwyther and daughter Molly Moorish watching on from backstage. 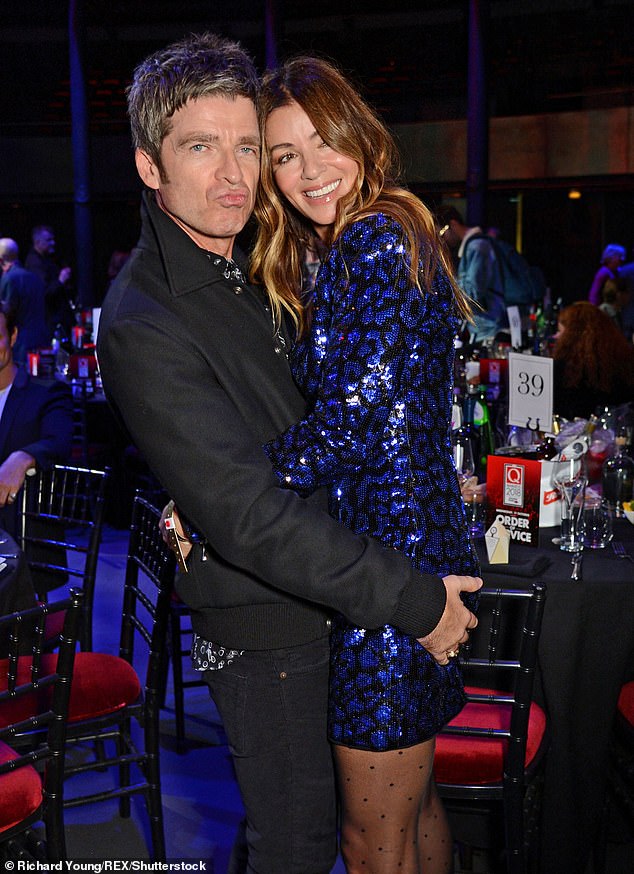 Insults: Sara Macdonald lobbed the insults at Liam over the weekend. Pictured in October 2018 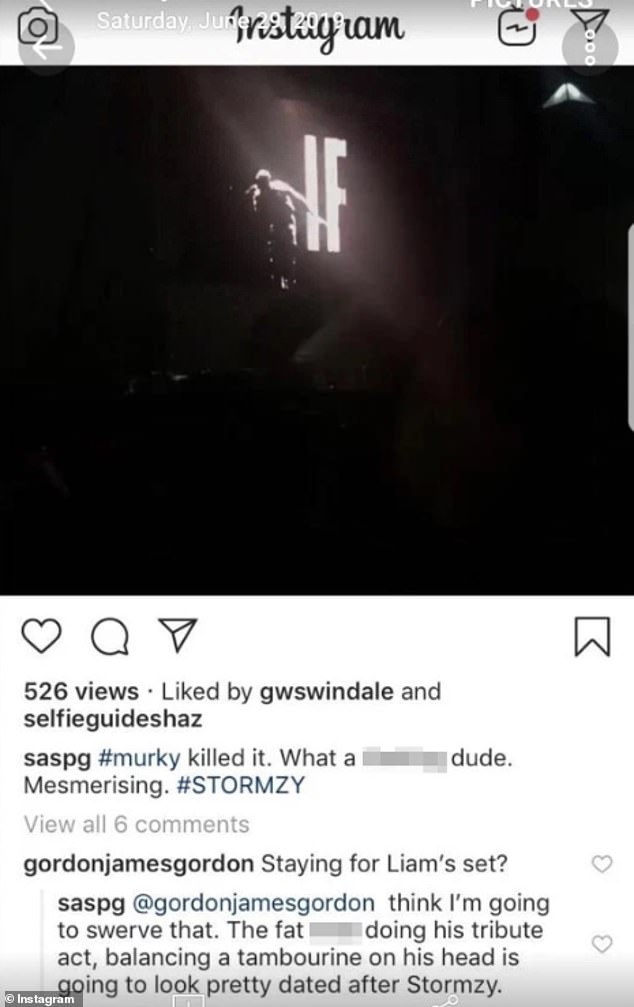 The rocker appeared ready for action as he kickstarted the headline set just before The Killers with his 1994 hit Rock ‘N’ Roll Star.

Armed with his signature maracas and a pair of Finlay sunglasses, the musician was every inch the showman as his distinct voice erupted across the fields.

Also spotted among the masses was Liam’s son Lennon Gallagher, 19, as he supported his father backstage.

Last month, Liam proved to be fuming as he hit out at his brother and former Oasis bandmate for banning his own band’s songs for his documentary.

In February, Liam, 46,  alleged that brother Noel, 52, would ‘sue him” if footage of himself performing Oasis hit Live Forever at the One Love Manchester gig was used in the documentary. 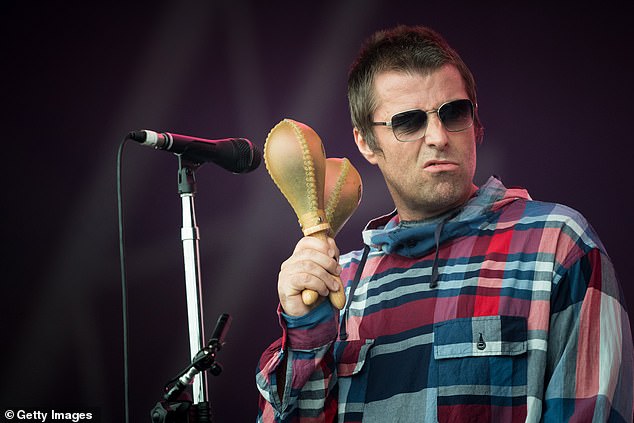 Return to Glastonbury: Despite the lack of support from his brother, Liam ensured all eyes were on him as he took to Glastonbury’s Pyramid Stage on Saturday

Speaking to Sky News at the London premiere of As It Was, Liam raged: ‘Him and his little people saw it and took the Oasis music out of it because that’s all he’s got left, d’ya know what I mean.

Liam, 46, was one of the headline acts at the June 2017 event, organised by Ariana Grande in direct response to the terrorist attack that killed 22 people, many of them children, during her concert at Manchester Arena.

But he claimed his rendition of Live Forever, a number one hit for Oasis in 1994, is the source of potential legal action from Noel should footage of the performance be used in new documentary As It Was. 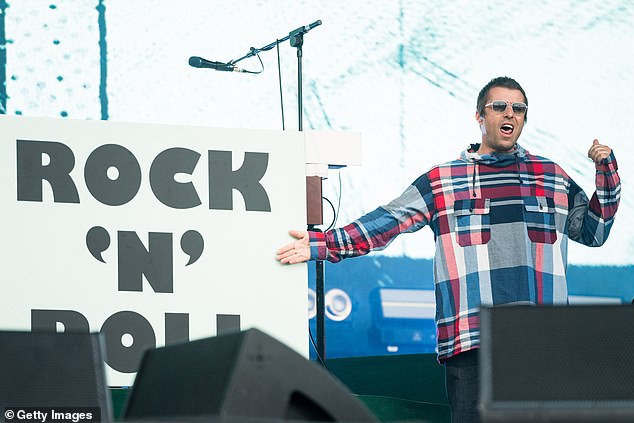 Looking good: Armed with his signature maracas and Finlay ‘Hamilton’ shades, the musician was every inch the showman

Liam claimed he received correspondence sent on behalf of Noel and his management company Ignition that he will face legal action if he includes footage of him singing the track.

He tweeted: ‘Ive just been informed that I’ll be sued by the not so mighty little fella and his goons at ignition if I use any footage of me singing oasis yes oasis songs in AS IT WAS who’s bitter now eh ps Dya want a hand selling those tickets AS YOU WERE LG x (sic)’

His forthcoming documentary – which has been directed by Charlie Lightening, who worked with his former group Beady Eye – will focus on Liam’s journey from “boredom, booze and legal battles” to solo star with the release of his debut solo LP As You Were and subsequent sold-out global concerts.

The brothers’ turbulent relationship has been well-documented in the public eye since their Oasis days, which formed in 1991. 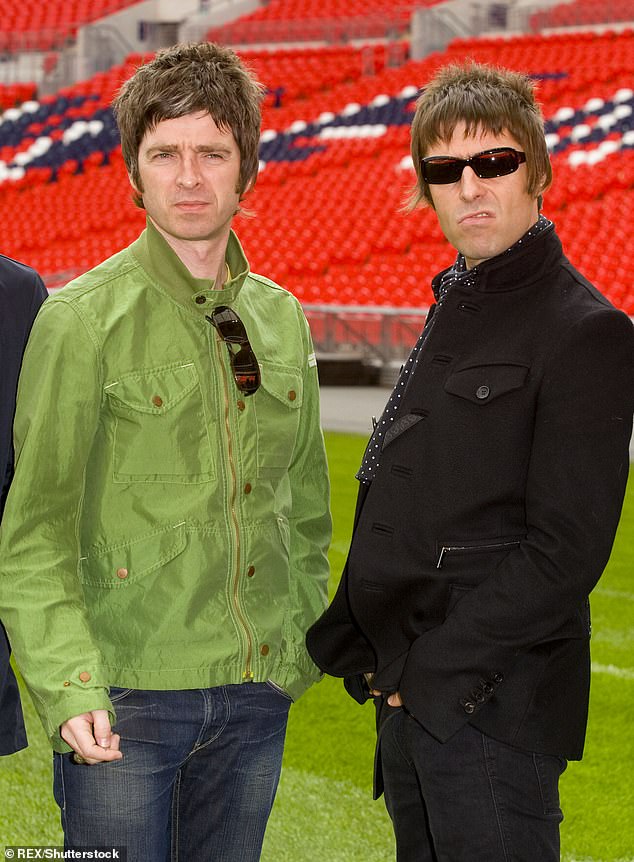 Oh dear: Last month, Liam said he wanted to ‘break his jaw’ in a new spat over the use of Oasis songs in his new documentary. Pictured in June 2009

Liam and Noel’s long-standing dispute dates back to their days in the band, before Noel quit insisting that he couldn’t work with his brother ‘a day longer’.

Their time in the band details sensational arguments during interviews, where they repeatedly swore at each other, and even resulted in physical violence.

Even during solo interviews the brother’s took time to insult the other, during an interview with Q magazine Noel said: ‘He’s rude, arrogant, intimidating, and lazy. He’s the angriest man you’ll ever meet. He’s like a man with a fork in a world of soup.’

Their on-going argument continued following the Oasis split in 2009, where during a BRIT acceptance speech Liam thanked every member of the band except for Noel. 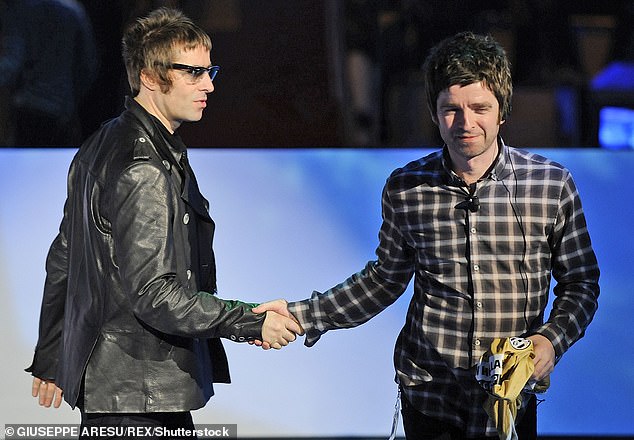 Happier times: Liam proved to be fuming as he hit out at his brother and former bandmate for banning his own band’s songs for his documentary. Pictured in November 2008