FRENCH villagers are complaining about a memorial to the heroes of the 1944 D-Day landings, saying it will get in the way of their sea views.

Prime Minister Theresa May and French President Emmanuel Macron will lay the foundation stone for the monument to British troops on the 75th anniversary of the June 6 landings.

The British Normandy Memorial will commemorate the 22,442 troops under British command who died in the summer of 1944 during the ferocious fighting of the Allied invasion of France.

French villagers in Ver-sur-Mer, Normandy, are complaining about the planned British Normandy Memorial, which commemorates 22,442 troops under British command who died in the summer of 1944 because they said it will block their sea view

The Daily Mail has backed the campaign, with hundreds of generous readers sending in money to help towards the £20million construction cost of a large statue of advancing soldiers and a long wall inscribed with the names of the dead.

But the memorial has met with objections from some of the residents of Ver-sur-Mer, who fear they will be swamped by coachloads of tourists.

They are also concerned over the environmental impact of a large car park in their village.

Maxi Krause, a retired professor who helped lead a 50-person march in opposition to the memorial last month, told The Times: ‘We owe the Allies, including the British, boundless gratitude.

‘It’s not about that. There is already a British cemetery at Bayeux with an enormous lawn around it where they could have put the pillars that they plan with the names engraved on them.’

She added: ‘This project is so monstrous. It’s like a supermarket from the point of view of its size.

‘There’ll be a wall more than seven metres high and 30 metres wide looking on to the sea. That cuts the view over the sea. 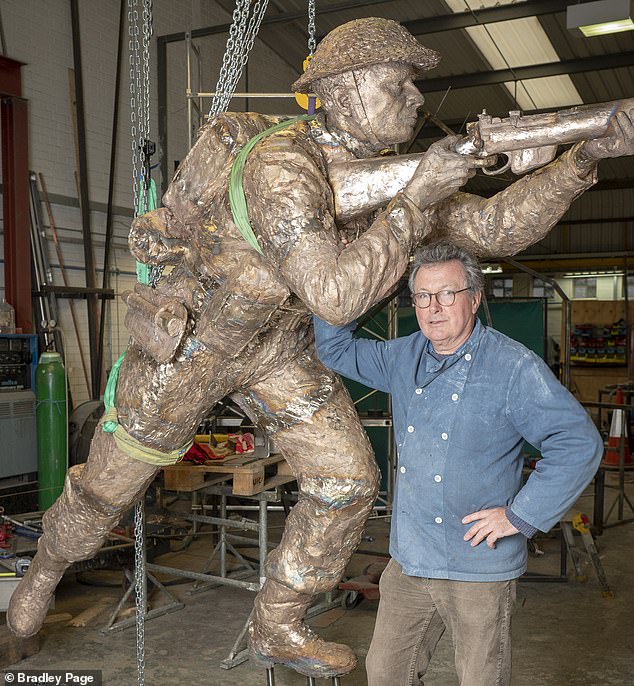 The memorial will be opened by Prime Minister Theresa May and Emmanuel Macron, the French president, on June 6, the 75th anniversary of the D-Day landings. The centrepiece will be three 440-kilo, 9-foot figures by sculptor David Williams-Ellis (pictured with the first)

‘It’s completely stupid. We are one of the only villages on the coast that is not spoilt by tourism.’

Prince Charles has lent his support to the project, which will be built on 47 acres of land overlooking Gold Beach.

He said it is a ‘long overdue British memorial… to the service personnel who gave their lives in Normandy in the summer of 1944’.

The chairman of the planning inquiry into the project is expected to make a decision on March 4. 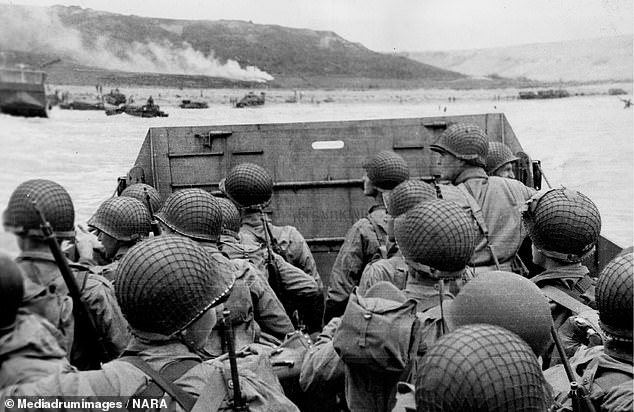 22,442 troops under British command died in the summer of 1944 during the ferocious fighting of the Allied invasion of France. The fighting proved to be a decisive turning point in the eventual Allied victory in 1945

Philippe Onillon, the mayor of Ver-sur-Mer and a fervent supporter of the project, is confident of getting approval by April 15 – more than seven weeks before the D-Day ceremony.

Around 200 people provided written submissions to the planning inquiry, out of which about half were opposed. But that is out of a village population of 2,000 of which around a fifth are residents of holiday homes.

Mr Onillon said: ‘I believe a majority is in favour. In this kind of inquiry it’s always the opponents who come forward.’

He added: ‘There are no reasons to worry. It will be a magnificent landscape of lawns, trees and flowers.’

Britain is the only nation that was involved in the 1944 invasion of France not to have a national memorial in Normandy.

How Britain prepared for bombing or nuclear attack with dozens of underground hideaways
Two men are fighting for their lives after spate of stabbings across north and east London
How Scarlett Johansson and Chris Hemsworth got their superhero bodies for Avengers: Endgame
Storm Hannah blows across Britain with 82mph winds and 24ft waves
Boy, 17, CLEARED of killing private schoolboy Yousef Makki
RICHARD KAY: The advice Prince Harry REALLY needs - when you're in a hole, stop digging
Slim patients may develop Type 2 Diabetes if they don't prioritise losing fat around the middle
International pop star finds two stowaways hiding in her tour bus