The Sohae Launch Facility, which the country uses to launch satellites into orbit and other technologies to aid its intercontinental ballistic missile (ICMB) program, had previously been partly dismantled after the two leader’s first meeting last summer.

An engine test site had been taken down, along with a rocket launchpad and a rail-mounted building, which would help transport vehicles to the launchpad.

However two days on from the stalemate in Hanoi, Satellite images captured on March 2 show operations at the once-dormant Sohae sight have resumed full-throttle – with its facilities once again under construction. 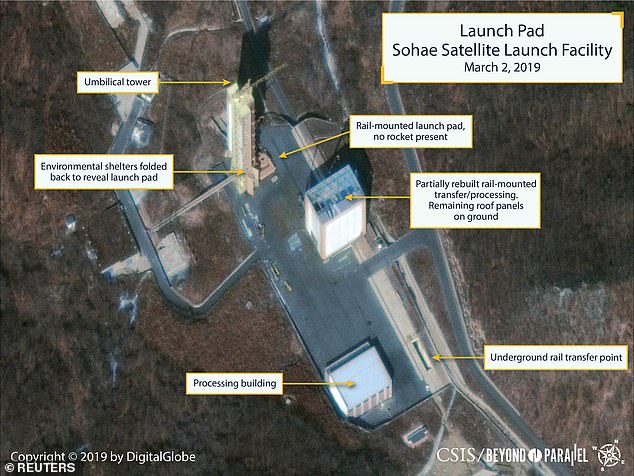 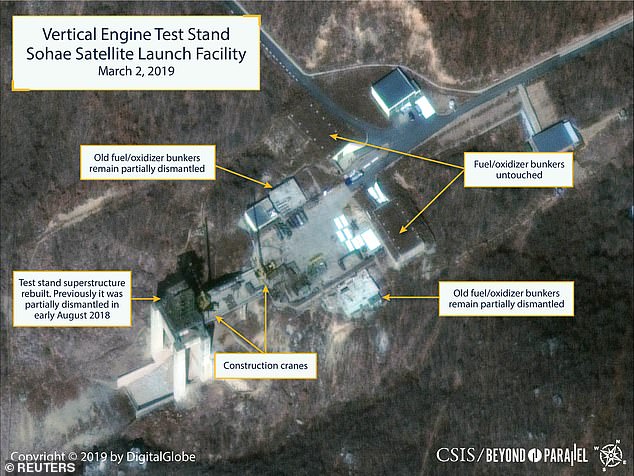 Two cranes and a series of apparent trailers have been pictured at the site, adding to the suggestion a construction work force are currently operating at the facility

The news broke just hours after Kim returned to North Korea on Tuesday, and may signal the end of the dictator’s nuclear detente.

Experts believe this may be a sign of retribution from Kim, after Trump denied his request to lift any of the US’ sanctions currently imparted on North Korea.

However, in a private meeting at South Korea’s National Assembly on Tuesday, officials from it’s National Intelligence Service hinted that North Korea may actually have been secretly re-building the Sohae site before the summit in Vietnam.

‘Based on commercial satellite imagery, efforts to rebuild these structures started sometime between February 16 and March 2, 2019,’ a 38 North report said.

Two cranes have been pictured at the site – also known as Tongchang-ri – where new walls and a new roof has been added to the launch pad.

Efforts are also being made to to rebuild the rail-mounted building and engine test sight were new roofing has been installed and other construction materials can be seen stacked nearby.

Possible trailers have also been cited in the satellite imagery, adding to the suggestion a construction work force are likely operating at the facility. 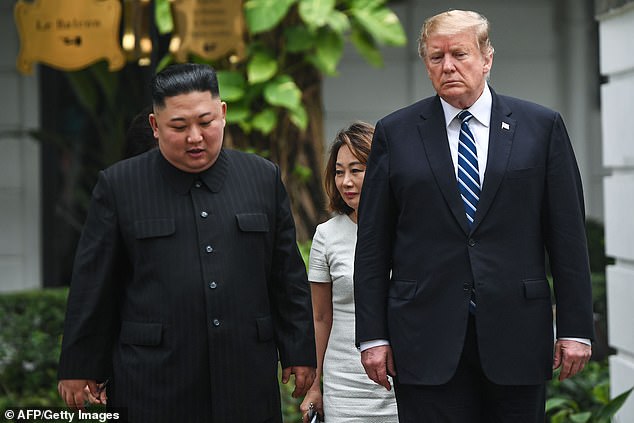 Experts say Kim may be acting in retribution towards Trump, after the President refused to lift any of the US’ sanction currently imposed on North Korea 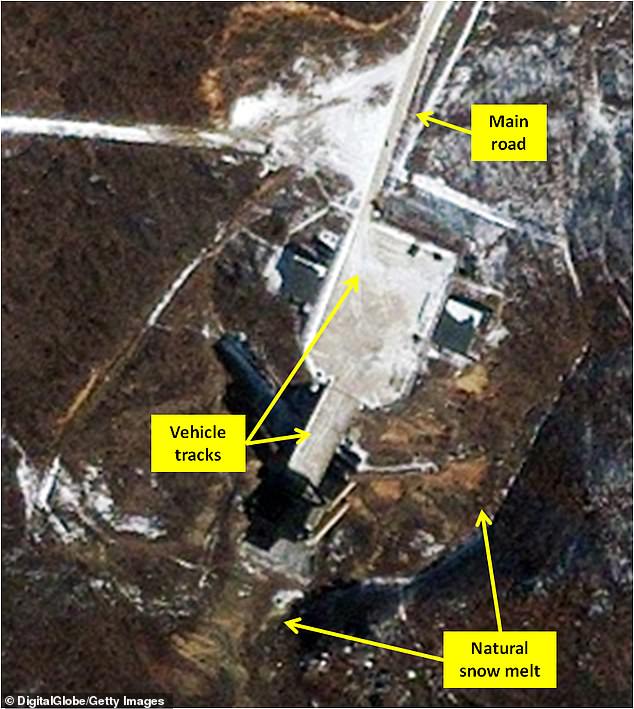 ‘This renewed activity, taken just two days after the inconclusive Hanoi Summit between President Donald Trump and North Korean leader Kim Jong Un, may indicate North Korean plans to demonstrate resolve in the face of U.S. rejection of North Korea’s demands at the summit to lift five U.N. Security Council sanctions enacted in 2016-2017,’ an analyst from Beyond Parallel told NBC.

Beyond Parallel believes the activity currently being observed at Tongchang-ri suggest North Korea is preparing for a test, though no missiles have yet been sighted.

The communist state hasn’t conducted any nuclear or missile tests since November 2017 – a hiatus President Trump has repeatedly credited to his imposition of hard-line sanctions on North Korea.

On the same day the site was pictured, Trump told reporters talks with Kim had been ‘very productive’ and the pair had made ‘great historic progress’.

He reassured reporters that one thing the pair had agreed on was no nuclear testing, insisting ‘no missiles going up, no rockets going up’. 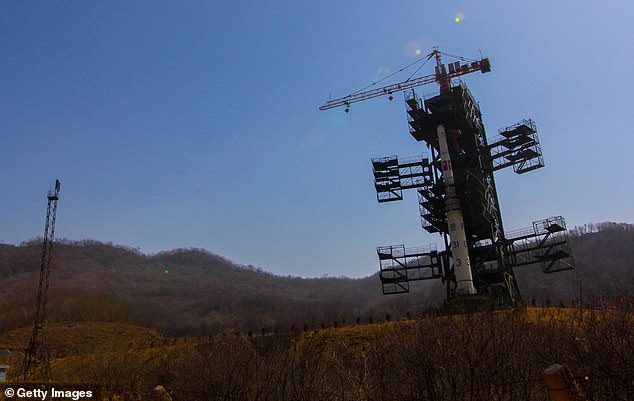 Analysts believe North Korea is gearing up to resume nuclear and missile testing for the first time since September 2017 (pictured: North Korea’s Unha-3 rocket is being prepared for takeoff at the Sohae Satellite Launching Station northwest of Pyongyang April 8, 2012) 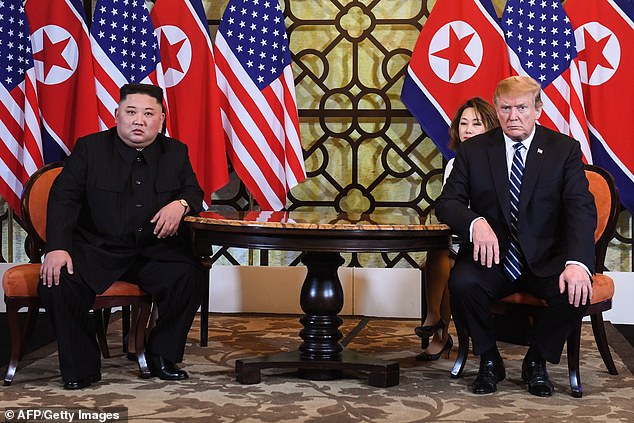 Trump said that he remains on good terms with Kim and continued to tout the ‘enormous potential’ of North Korea, though there are no plans for another summit

Trump said that he remains on good terms with Kim and continued to tout the ‘enormous potential’ of North Korea, and said there were no plans for a next summit meeting.

He also candidly revealed that Kim wanted the sanctions off, but was not willing to give up his array of nukes, missiles, and additional sites he only alluded to vaguely.

Basically they wanted the sanctions lifted in their entirety and we couldn’t do that,’ the president said. ‘They were willing to de-nuke a large portion of the areas that we wanted but we couldn’t give up all of the sanctions for that.’

Secretary of State Mike Pompeo added: ‘We have been working for weeks to find a path forward so we could make a big step at this summit.

‘We made progress and even more progress when the two leaders met over the last 48, or 72 hours.

‘But we didn’t get all the way. We didn’t get something that made sense for the United States.’