Norway’s government has collapsed over the decision to allow an ISIS bride to return to the country from Syria with her children.

The populist Progress Party pulled out of Norway’s coalition government today after the mother was permitted repatriation so that her gravely ill five-year-old son could receive medical treatment.

The 29-year-old and her two children have been living in the Al-Hol camp in Syria – notorious in Britain as the detention centre which held Shamima Begum.

Prime Minister Erna Solberg said she would forge on with a minority government comprised of her Conservatives, the centrist Liberal Party and the Christian Democrats. 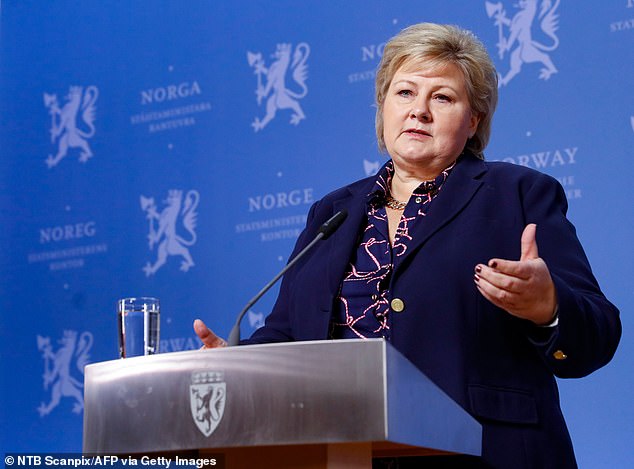 Prime Minister Erna Solberg, leader of the Conservative Party, speaks on Monday after the populist Progress Party said it would no longer support her government 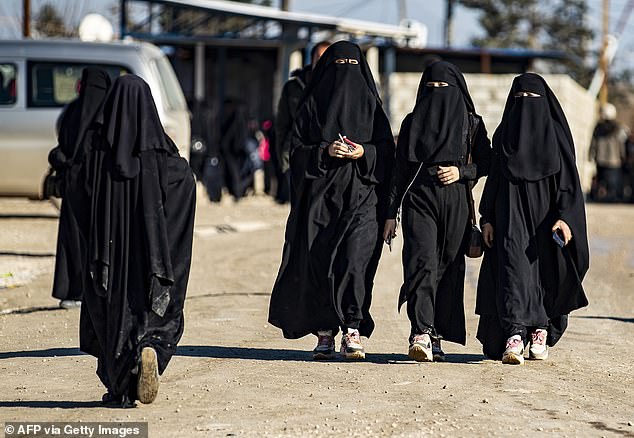 The 29-year-old and her two children have been living in the Al-Hol camp in Syria – notorious in Britain as the detention centre which held Shamima Begum (pictured: file photo of women at the Al-Hol camp earlier this month)

Progress Party leader Siv Jensen said that ‘the cup is now full’ after the decision to allow the woman to return to Norway, on which her anti-immigration party feels it was not consulted.

She added that when Solberg’s coalition expanded a year ago to include the liberals and the Christian Democrats, veering more to the centre and becoming a majority government, ‘enthusiasm dropped.’

‘Over time, politics was too much based on compromises,’ said Jensen, who is Norway’s outgoing finance minister.

Prime Minister Solberg said she ‘understood’ why the Progress Party wanted to leave her coalition government, adding she would seek cooperation with the party – which is Norway’s third-largest.

Norway’s next parliamentary election is scheduled for September 2021.

To stay in office until then and pass legislation in the 169-seat parliament, Solberg needs the support of parties outside the government, including the Progress Party.

The Norwegian woman of Pakistani descent reportedly travelled to Syria in 2013 and married a Norwegian foreign fighter there who was later killed in fighting.

She was formally arrested Saturday upon her return and was placed in an Oslo hospital with both children.

Jensen said many believed that the woman, who has not been named, ‘used her child as a shield to come back to Norway.’ 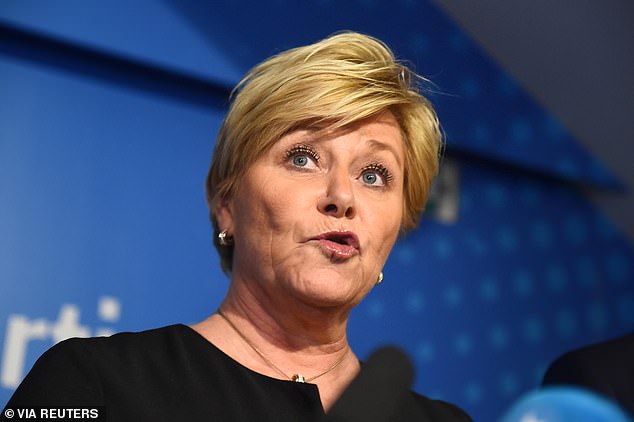 Norway’s Progress party leader and Finance Minister Siv Jensen today, she had accused the woman as ‘using her child as a shield to come back to Norway’

‘There are many … who are displeased by this, not just in the Progress Party,’ Jensen said last week.

The mother, who was not named, refused to let the sick child travel alone to Norway, which then allowed her to travel from the Kurdish-controlled camp at Al-Hol where all three had been detained since March 2019.

‘A majority in the government believed that concern for the child was paramount,’ Solberg said.

Solberg has been prime minister of the Scandinavian country since 2013 when she formed a coalition with the Progress Party. The parties won renewed support in 2017 elections.

Philippine President Duterte threatens to send troops on a 'suicide mission' in South China Sea
Hackers steal nearly £31 million in Bitcoin from one of the largest cryptocurrency exchanges
France reports 642 more coronavirus deaths as country's toll hits 19,323 up from 18,681
Huge voter turnout is hit by problems across the country
Collingwood's banner shreds as the team runs on to the MCG in front of nearly 100,000 fans
Brexit vote: May's deal is killed off after MPs vote NO 391 to 24
Coronavirus: Ivanka Trump in mask after assistant tests positive
Schuette cancels TV ads in all markets except Detroit