One of Russia‘s richest women has died in a light aircraft crash in Germany.

Airline tycoon Natalia Fileva, the co-owner of Russian carrier S7, was on board a six-seater plane which crashed and exploded near Frankfurt today.

German police said there appeared to be three people on board the plane, including the pilot of the flight, which originated in France.

Two more people are believed to have died in a collision with a police vehicle which was responding to the scene. 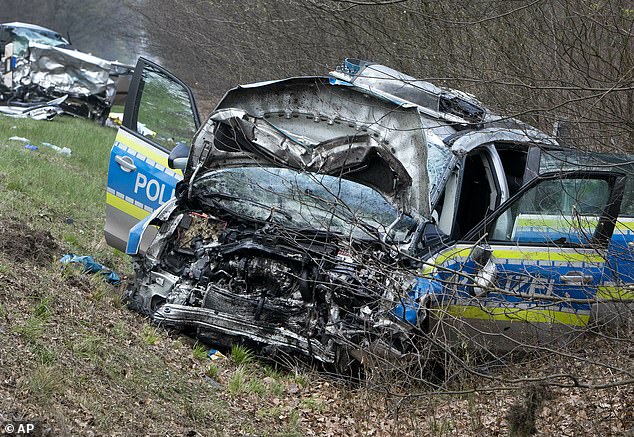 The remains of a police car which crashed into another vehicle near Frankfurt, on the way to the scene of a plane crash in which a Russian millionaire died

Her airline confirmed that Ms Fileva was on board the single-engine, six-seater Epic-LT aircraft when it crashed.

According to state-owned publication Russia Beyond, she and her husband Vladislav Filev have owned the company since the 1990s.

She was said to be the head of S7’s board of directors, helping to make it Russia’s largest domestic airline and a competitor to flag carrier Aeroflot.

Police said the six-seater airplane took off in France and was on its way to the central German town of Egelsbach.

It crashed and burned in a field near Erzhausen, six miles south of Frankfurt, at around 3.30pm.

In a further tragedy, an emergency carrying two police officers was on the way to the crash scene when it collided with another car.

The second vehicle was carrying two young people who died in the crash while the police officers were seriously injured.

German officials said the cause of the plane crash was still unknown, saying the aircraft had completely burned out.