OSCAR RIVAS is looking to cement his place in the mind’s of the heavyweight big dogs with a KO win against Dillian Whyte.

The rugged, unbeaten Colombian faces Brixton’s left-hook specialist at the O2 Arena on Saturday night with the WBC interim world title at stake.

But a secondary belt, that puts you in line to face champion Deontay Wilder, is not what Rivas, 32, is looking to win on the weekend.

The South American powerhouse is aiming to win the attention of Wilder, Anthony Joshua and Tyson Fury with an upset win against Whyte and secure more future paydays against the division’s elite.

Rivas told SunSport: “I feel this is a challenge I have to take on, there’s no point talking about it – it just something I feel I must do.

“If I do get this title and beat Dillian on the night it gives me that step up to have a chance and take on the Fury’s of the world or Anthony Joshua or Deontay Wilder’s belts.

“I’ve always liked challenges in my career, so depending on how things go on the 20th I think I’ll be very much in their minds.”

Rivas, who travelled the world in the unpaid ranks picking up wins against unified champion Andy Ruiz Jr and Kubrat Pulev, was beaten by amateur boxing legend Roberto Cammarelle in the 2008 Olympics.

Despite his career as a travelling amateur, the 32-year-old has only fought once outside of the US and Canada – a 2017 points win against Spaniard Gabriel Enguema.

Travelling to the UK for the first time, though, does not faze Rivas, who insists it does not matter how many of Whyte’s London faithful pack out the O2 arena. 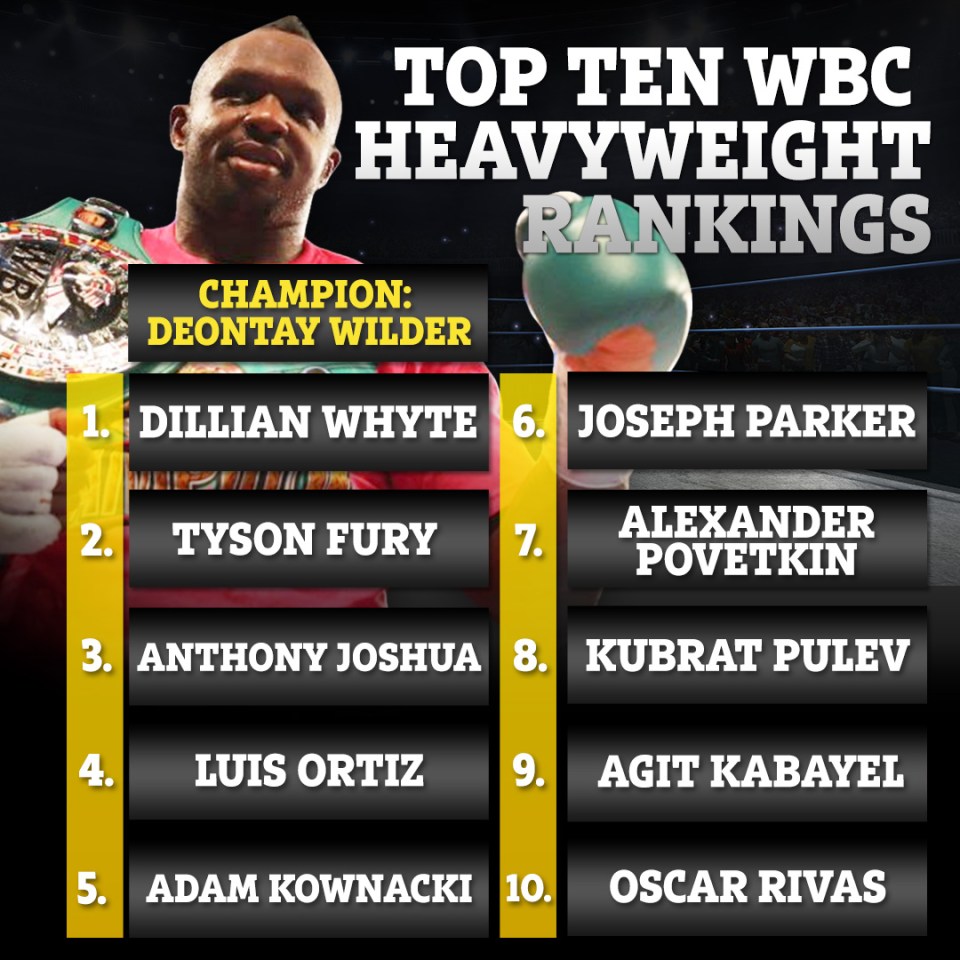 He said: Obviously it’s nice to travel and fight in different cities but what counts for me with all due respect to every destination, it’s the quality and the class of opponent that counts.

“If I need to go to China and fight someone I’d go there – no matter where as long as the rival is in place.

“I’ve fought in plenty of stages where I’ve felt I had to win over the fans and so wherever you go you’re up against one man in the ring it doesn’t matter if there are 20,000 or 5,000 people in the crowd.

“It’s the opponent you’re up against so that’s the main thing.”

Whyte is coming off a savage round 11 KO against domestic rival Dereck Chisora in December.

The Brit snubbed a unified world title crack against Joshua in the summer in order to chase down WBC king Wilder.

But WBC No1 ranked challenger Whyte was overlooked for a title shot, as American Dominic Breazeale lasted just one round in his May shot at Wilder’s belt.

Promoter Eddie Hearn has since announced Whyte’s battle against Rivas will be for the WBC interim title – with the winner becoming mandatory.

I’ve had some good results and people know I’m a good boxer so hopefully this is an occasion where I’ll be able to show to a wider audience exactly what I’m capable of.

Choosing Rivas as the last hurdle before becoming mandatory was seen as a risky move from Team Whyte.

But Saturday’s traveller believes his 26 prior wins and 18 stoppages means he is a worthy contender in the WBC final eliminator.

He added: “I don’t think it was a surprise or came from nowhere, certainly I had a following and people are aware of me.

“I’ve had some good results and people know I’m a good boxer so hopefully this is an occasion where I’ll be able to show to a wider audience exactly what I’m capable of.

“I’ve obviously been chosen as an opponent for Dillian as for a reason, for these performances and we’ll see what happens in July.

“He’s a strong guy, strong fighter and certainly I have to be very wary of him and pay a lot of attention to him.

“But I’m a strong fighter too, and my qualities in particular are my strength, power and speed as well – but I think it’s a case that both of us have to be wary of each other as there’s two good fighters in there.”