FANS of the Lionesses were left fuming after a man who criticised women’s football was given the chance to watch the World Cup for free.

Keanu Bruton wrote on Twitter earlier this week that “women’s football is just not very good.”

That message was picked up by England star Fara Williams and drinks giant Coca-Cola, who offered Keanu the chance to fly out to France to watch Phil Neville’s side in action.

“Alright well I want to prove you wrong!

“I’ve teamed up with @CocaCola_GB so how about we fly you out to France this weekend to watch the women’s England v Scotland game with us… You in?”

After some back and forth, Keanu eventually accepted the offer, replying: “OK, sold. Count me in.”

But the publicity stunt backfired with fans of Williams and England women criticising the move – especially as many fans had been unable to make the trip across the Channel. 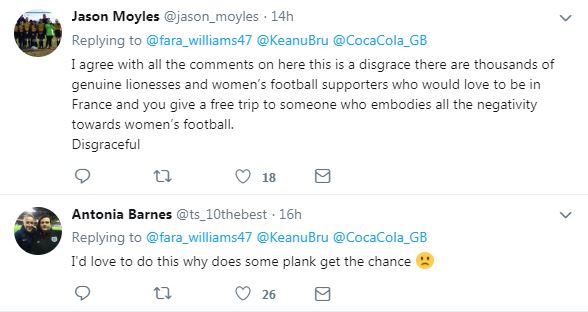 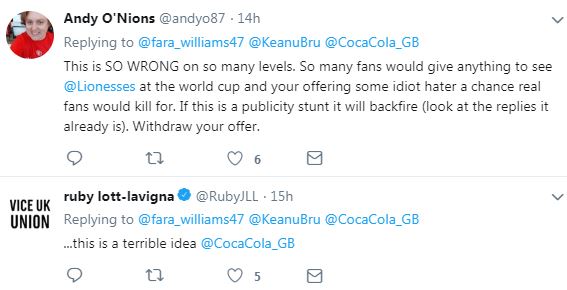 Hannah wrote: “As a massive women’s football fan who couldn’t afford to fly to Nice, this hurts.”

Jason Moyles added: “I agree with all the comments on here, this is a disgrace.

“There are thousands of genuine Lionesses and women’s football supporters who would love to be in France and you give a free trip to someone who embodies all the negativity towards women’s football. Disgraceful.”

Antonia said: “I’d love to do this why does some plank get the chance.”

Ruby Lott-Lavigna added the move is “a terrible idea”, while Alex Brown said it was a “bit of a punch in the gut.”

The offer, which went out on Thursday night, still appears to stand.

All the latest Arsenal transfer news and gossip

Williams, who came through the Chelsea academy and has played for Everton, Liverpool, Arsenal and Reading, has more caps than any England player with 170.

However, the 35-year-old was left out of the final 23 by Phil Neville.

The Lionesses face Scotland in their opening group game on Sunday at 5pm.