A predator who abused girls on an ‘industrial scale’ has been jailed for 12 years for the rape and abuse of girls aged 12 to 17.

Gavin Scoular, now 24, used social media sites to make contact with his young victims and offer them affection between 2010 and 2013.

Scoular targeted the vulnerable girls at locations in Edinburgh, many of whom were beneath the age of consent, and ‘discarded’ them afterwards.

Passing sentence at the High Court in Edinburgh, Lord Summers said: ‘In most cases you coerced them into unwanted sexual activity by engaging in online grooming. 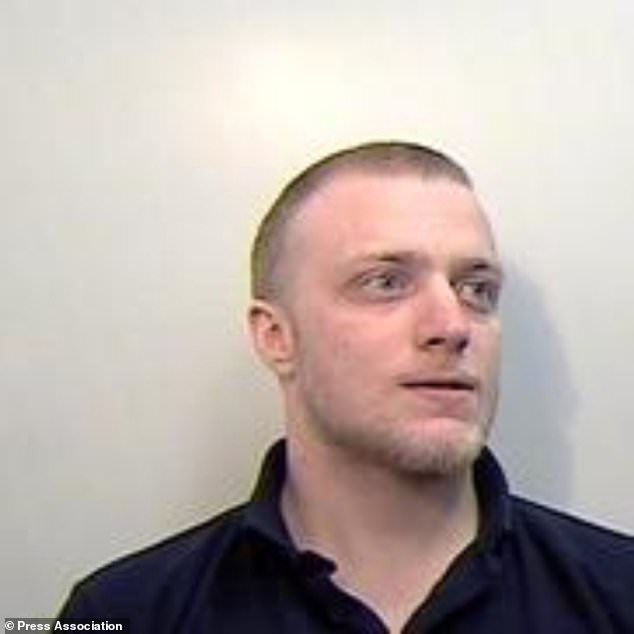 Gavin Scoular, 24, was jailed for 12 years at the High Court in Edinburgh after he was found guilty of the rape or assault of seven victims

‘You engaged with these behaviours with a large number of girls within a short period of time.

‘You used social media to make contact with them, offer them affection.

‘Some of them were vulnerable with unhappy home lives but they succumbed to your advances.

‘All you wanted was sexual gratification and each of those girls was discarded by you once you abused them for your own purposes.’

During exchanges with Scoular’s defence counsel, the judge also spoke of the ‘industrial scale’ of the offending.

Scoular was convicted of seven rapes against four girls, as well as a string of other sexual offences – taking the total number of victims to seven.

He handed him an extended sentence involving a further five-year period of supervision following release from custody, and placed Scoular on the sex offenders’ register indefinitely.

The court heard how Scoular’s victims, all of whom were younger than him, ranged in age from 12 to 17.

The offending behaviour in this case began when he almost 15 and ran until he was 18, covering the period from 2010 to 2013.

His offending was only brought to a halt when he was arrested in connection with other offences.

Scoular was found guilty of the rapes at a trial at the High Court in Livingston last year.

Three of the rape victims were under the age of consent at the time the attacks took place.

Scoular, listed as a prisoner in Dumfries, was also convicted of other charges, including unlawful sexual activity with someone under 16, sexual assault and grooming charges.

The judge had looked into the possibility of imposing an Order for Lifelong Restriction on the offender, but he ruled that the criteria were not met after experts found that Scoular posed a medium risk of reoffending.

Iain Paterson, defending, had urged the court to take Scoular’s age and relative immaturity at the time into account when passing sentence.

He spoke of the likelihood that the offender could change his ways and said the convictions have had a ‘dramatic impact’ on Scoular’s family.

The court heard how knowledge of the offences effectively emerged from the same police inquiry that saw Scoular convicted of charges at Edinburgh Sheriff Court in 2014 – a factor the judge took into account when handing out the sentence.

Detective Chief Inspector Martin Maclean said of Scoular: ‘The Public Protection Unit investigation into his devices revealed offending on a scale amongst the worst I have ever come across in such a short space of time.’

He also said: ‘Scoular is an extremely dangerous individual, taking every opportunity he could to go online and exploit young girls – it is fair to say he was compelled to do this for his own sexual gratification.’

A spokesman for children’s charity NSPCC Scotland said: ‘In common with increasing numbers of abusers, Scoular used social media to target young girls and carry out his sickening crimes.

‘It is clear that children face grave risks in the online world and the NSPCC has called for stricter guidelines to be introduced to keep children safe.’

Lib Dem leader Jo Swinson says Boris Johnson's EU departure plan is 'not what people were promised'
Final photo of Romanian singer Anca Pop shows her staring out over the same river where she died
Iran accuses the US of a 'big lie' over missile claims
Madonna determined to play Eurovision this Saturday despite calls to boycott Israel
CHRISTOPHER STEVENS reviews last night's TV: It's grim down South but there's laughs by the sea
Ministry of Defence 'covered up' report that thousands of soldiers are living in 'deadly' barracks
Widespread flooding threatens to ruin the 'Manic Monday' Christmas getaway
JAN MOIR: In his hotly-anticipated TV interview, David Cameron was a rescue pup... rescuing himself