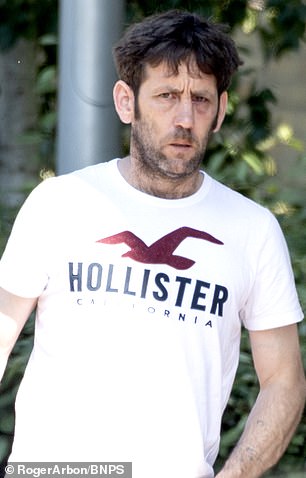 Shane Brannigan is alleged to have used excessive force when he made his ‘Wild West-style’ citizen’s arrest on paedophile Andrew Vaughan, who he helped convict of a child sex offence

A self-styled paedophile hunter who snared a child sex offender in an online sting operation that led to his conviction has now been put on trial himseld accused of holding the pervert prisoner.

Shane Brannigan is alleged to have used excessive force when he made his ‘Wild West-style’ citizen’s arrest on paedophile Andrew Vaughan.

Vaughan had sent lewd videos of himself to what he thought was an underage girl’s phone – but in fact it was Shane Brannigan and a fellow member of his so-called ‘N*nce Haters’ Association’.

The 41-year-old, who is on trial at Bournemouth Crown Court, travelled from his home in West Yorkshire to Bournemouth, Dorset, to confront Vaughan and detain him for the police.

Although the sting resulted in Vaughan being convicted and jailed for sexual communication with a child, Brannigan is accused of breaking the law while detaining him for 30 minutes before police arrived.

Giving evidence from behind a screen, Vaughan told the jury: ‘The two men got into my car and got hold of me. They would not let go. I just wanted to go into my house.

‘Mr Brannigan had me in a headlock and I panicked. I was fearing for my life and was actually relieved when the police arrived because that made them stop.’

Bournemouth Crown Court heard Brannigan and an unnamed friend lay in wait for the 49-year-old to return home before forcing their way into his car.

It is alleged that Brannigan put Vaughan in a headlock, punched him in the ribs and head and refused to let him go until the police arrived 30 minutes later.

The convicted sex offender told a jury that he feared for his life and was relieved when the police turned up to arrest him.

Robert Bryan, prosecuting, said despite the ‘unpalatable’ nature of the offence committed by Vaughan, the CPS had to bring charges of false imprisonment against ‘vigilante’ Brannigan.

Mr Bryan said: ‘This case concerns what was once called a citizen’s arrest. As you can imagine this is heavily regulated by the law and you cannot use excessive force when making an arrest.

‘People can’t put themselves above the law and become vigilantes. We have police officers for a reason – this is not the Wild West.

‘This is still the case no matter how unpalatable the offence is.

‘Nobody is going to shy away from what Mr Vaughan was convicted of but we cannot condone people acting in the way Mr Brannigan acted. This is why the Crown has brought this case against him.’

Mr Bryan said the incident happened on October 25, 2017, when Vaughan arrived him from work to find Brannigan and a colleague waiting for him.

The prosecutor added: ‘The two men came up to his car. They got into the car and confronted him.

‘They are what they would describe as paedophile hunters but in this incident they were vigilantes.’

The arrest was caught on camera by Brannigan and the footage was shown to the jury.

During the recording Vaughan can be heard screaming for help as well as banging his head against the steering wheel, sounding the horn.

During his evidence Vaughan claimed that his ribs had been bruised by Brannigan.

But Mark Florida-Jones, defending, put it to Vaughan that a police report recorded ‘no bruising or obvious sign of rib pain’.

Vaughan also admitted that he had bitten Brannigan and headbutted him as he attempted to escape the car.

Mr Florida-Jones claimed the defendant had only been restraining Vaughan to prevent him getting out of the car.

He said: ‘They had to restrain you to stop you leaving the car but at no point did Mr Brannigan punch you.

‘To be blunt, I would put it to you that you are lying.

‘You wanted Mr Brannigan to punch you so when the police arrived you could be treated as a victim.

‘He admitted that he wanted to hit you but he did not.’

Vaughan replied: ‘No that is not the case.’

Brannigan, from Pontefract, West Yorkshire, denies the charge of false imprisonment and the trial continues.

Top civil servant quits amid growing acrimony between Downing Street and the Whitehall machine
Coronavirus UK: Country faces lockdown until 2021
Train season tickets soar by more than £100 next year
Free-runner fell to his death in Waterloo
Trump raises the prospect of lifting the lockdown knowing people will get infected
How terrified Arsenal stars Ozil and Kolasinac were chased for a MILE by knife-wielding carjackers
Home urine test could 'revolutionise' prostate cancer diagnosis
Firefighters 'could not find fire' at Notre Dame 23 minutes before blaze