Parisians flocked for a drink at midnight after France reopened its beloved cafes and restaurants on Tuesday.

After 11 weeks of coronavirus lockdown many couldn’t wait for daybreak and stayed up into the small hours of the morning knocking back glasses of wine and litres of lager.

Bars, restaurants and cafes threw open their doors across the country today, although in Paris – where the virus has been more prevalent – seating will only be permitted on outside terraces.

Thousands thronged in parks and gardens which were reopened over the weekend, and now eating and drinking establishments have followed in the second phase of a step-by-step lifting of lockdown. 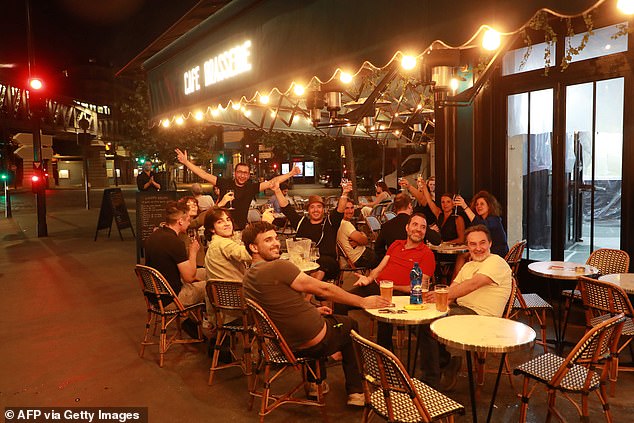 Parisians enjoys their first drink on a terrasse after all bars were closed for two and and half months during the lockdown to reduce the spread of the COVID-19, at the Royal Cambronne brasserie that opened at midnight on June 2 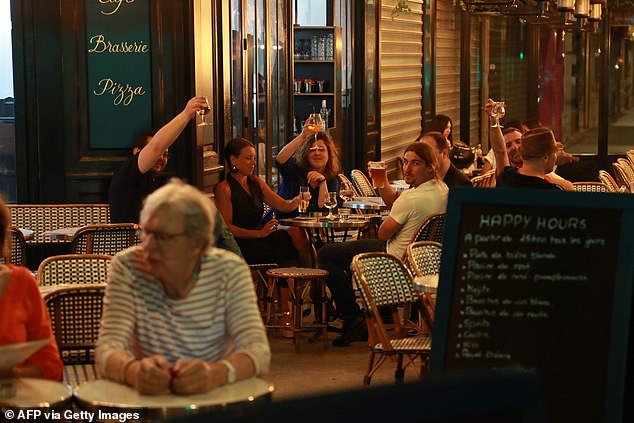 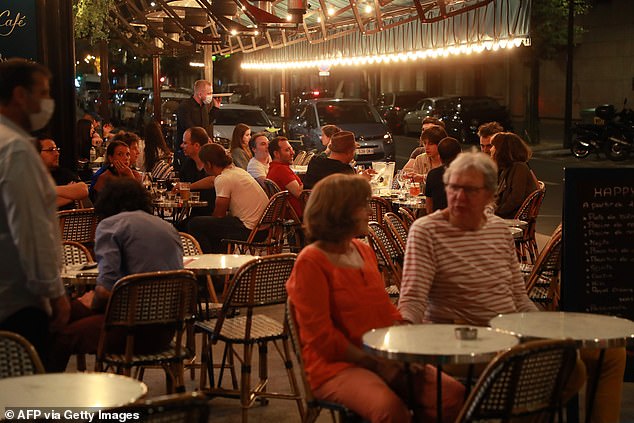 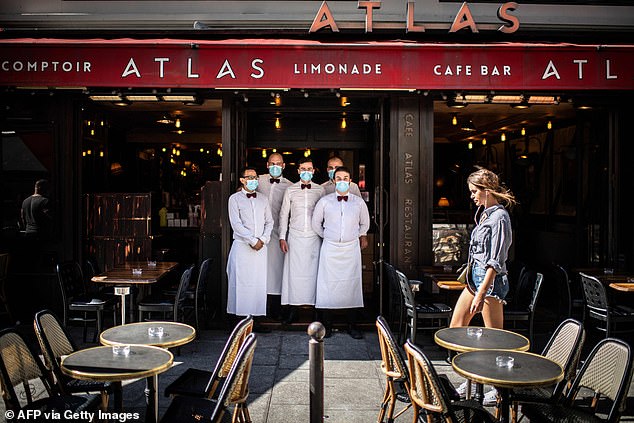 Waiters pose at their terrasse of their restaurant rue de Buci in Paris this morning, as cafes and restaurants reopen in France, while the country eases lockdown measures taken to curb the spread of the COVID-19 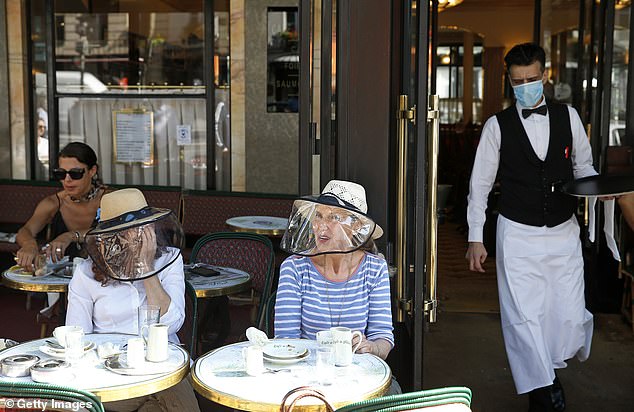 Women wearing protective visors have breakfast at the terrace of ‘Cafe de Flore’ in the Latin Quarter district as bars and restaurants reopen after two months of nationwide restrictions due to the coronavirus outbreak this morning in Paris, France

And a second, more thorough disinfection was due before they opened on Tuesday, he told AFP.

French people can again ‘live a life which is almost normal,’ said Prime Minister Edouard Philippe last week, as he announced the reopenings.

To cater for the expected rush back to the city’s eateries, the city council gave special permission for tables to be placed on sidewalks, parking spots and other public places. Several roads will also be closed to car traffic. 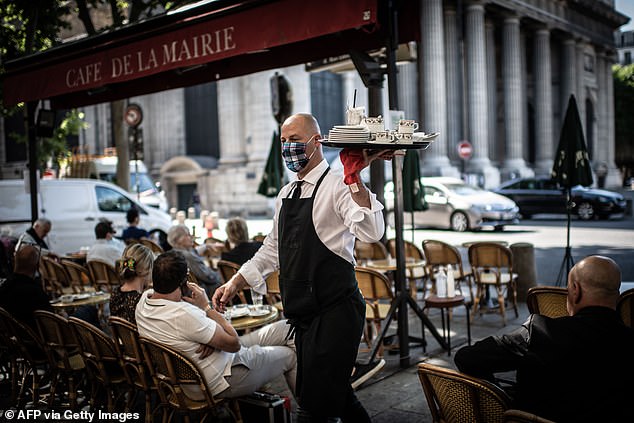 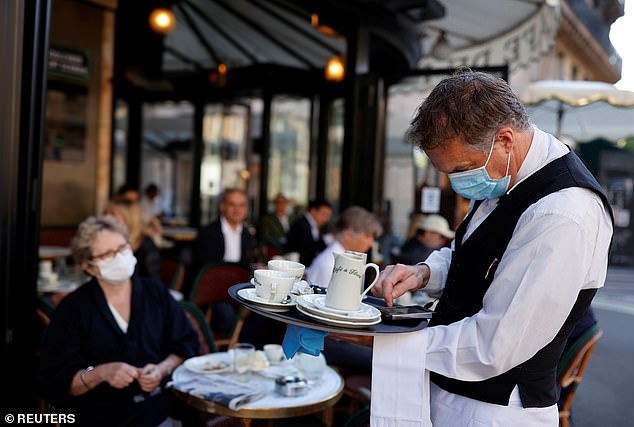 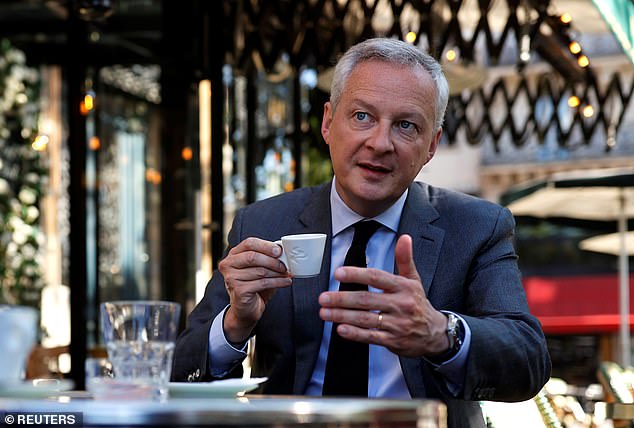 French Economy and Finance Minister Bruno Le Maire gestures as he meets with restaurant and cafe owners at the Cafe des Phares on Bastille square, as restaurants and cafes reopen 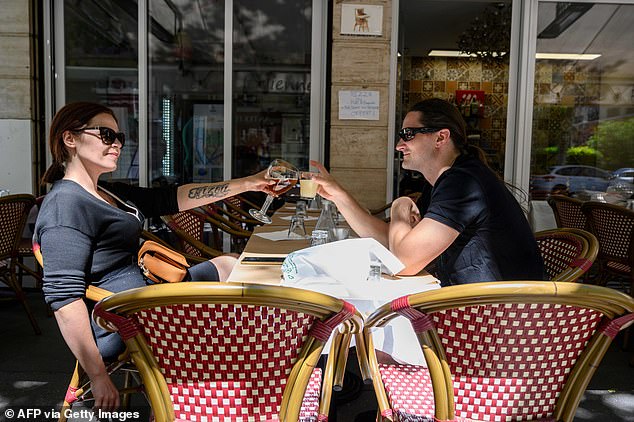 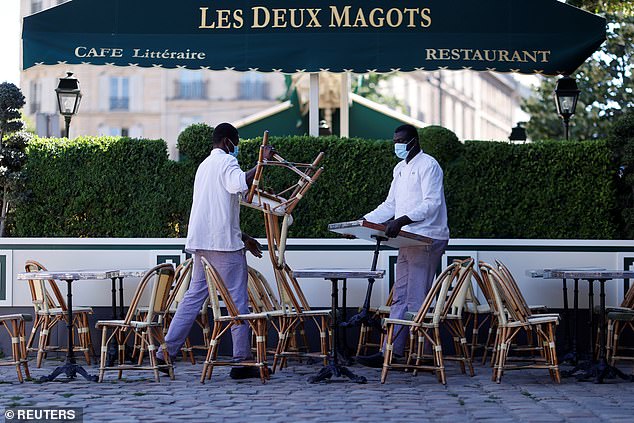 The government credits France’s strict lockdown, which lasted from March 17 to May 11, with saving thousands of lives by relieving pressure on hospitals, but is eager to restart an economy devastated by the measures.

The country, which has suffered nearly 29,000 deaths, also faces an ‘historic recession’, says Philippe, and a sharp rise in unemployment claims.

The spread of the virus appears to be under control in most of France, designated ‘green zones’.

But the Paris Ile-de-France region and the overseas territories of Guiana and Mayotte, still in the higher-risk ‘orange’ category, face a slower easing of the lockdown restrictions.

Across the country, public gatherings of more than 10 people are still banned until June 21. And people still have to wear masks in public transport, stations and airports. 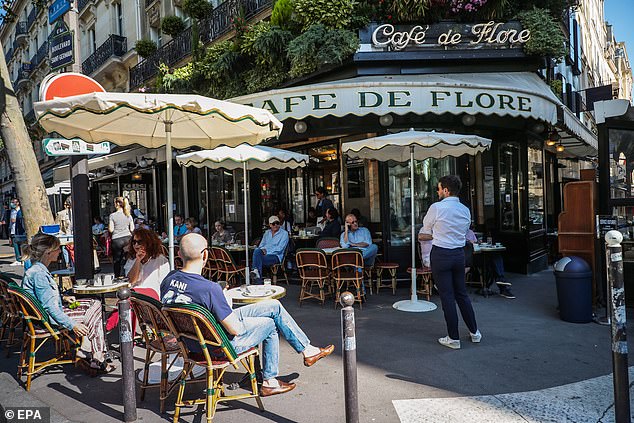 People at the terrace of ‘Cafe de Flore’ in the Latin Quarter district as bars and restaurants reopen in Paris, France, this morning 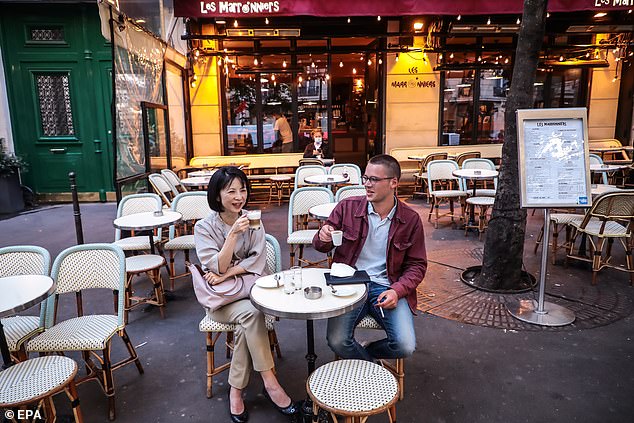 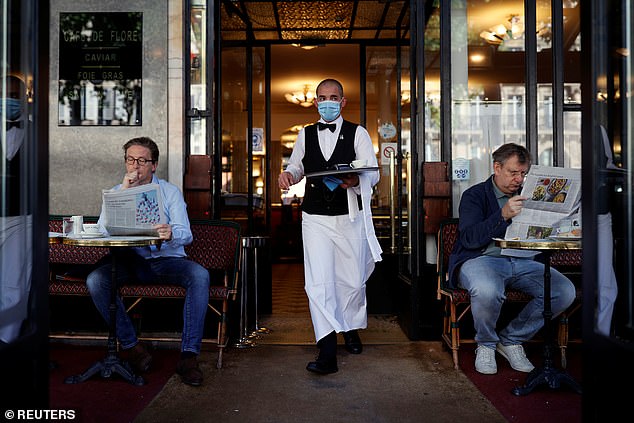 A waiter wearing a face mask serves at Cafe de Flore, as restaurants and cafes reopen following the coronavirus outbreak, in Paris 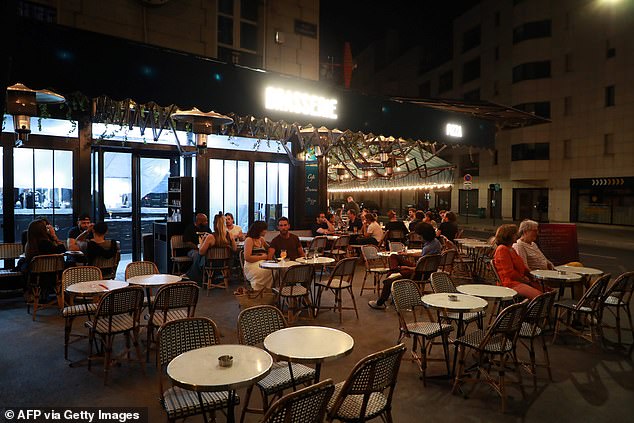 Parisians enjoys their first drink on a terrasse after all bars were closed for two and and half months during the lockdown to reduce the spread of the COVID-19, at the ‘Royal Cambronne’, a Parisian Brasserie that opened at midnight on June 2, 2020 in Paris

People can dine together in restaurants in groups of no more than 10, but with a minimum 3.3ft distance between tables.

But all beaches can reopen from Tuesday, and weddings can once again be celebrated.

Primary and middle schools will open countrywide, as well as high schools in green zones – but progressively and with a limited number of pupils per class.

Epidemiologist Arnaud Fontanet, a member of the scientific council advising the government, struck a note of caution.

‘Every day, there are five new (outbreak) clusters… we have had more than 100 clusters declared since May 11, so we can see that the virus is still present,’ he warned on BFMTV.

France’s StopCovid mobile app, that will alert users if they have been in close proximity of someone tested positive, will also come into use on Tuesday.