A partially-sighted woman was left in tears after she being barred from a dinner restaurant in a five-star hotel she was staying at – because of her guide dog.

Catherine Brown had booked a weekend break for her husband’s birthday at The Fleece Hotel, on the edge of The Cotswolds, in Gloucestershire, in December last year.

She claims that she phoned up before the visit to let them know she had a guide dog to assist her day-to-day, and was told this was okay.

But on their first night in the hotel, Catherine says she was ‘physically barred’ from entering the dining room – because somebody in there ‘may be’ allergic to dogs. 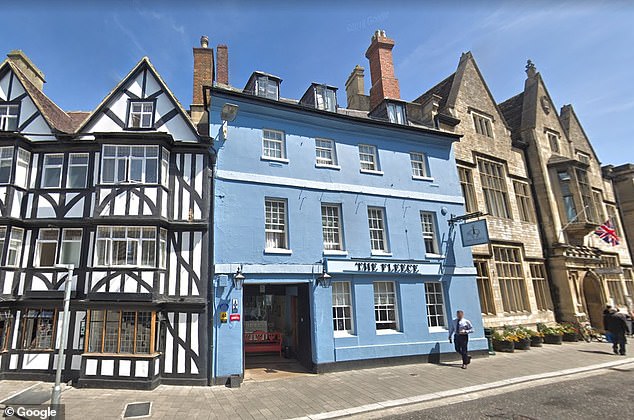 Instead, Catherine was told she could eat in the seated area leading into the restaurant, or the packed bar area – both of which, she said, were too dimly lit for her poor sight.

Catherine, from Glastonbury, Somerset, said: ‘I was physically barred from entering the dining room.

‘A very tall man stood in front of me and said I wasn’t allowed in as somebody in there may have been allergic to dogs.’

She said the area leading into the restaurant was ‘dimly-lit’ with candles, and added: ‘I told them that due to the poor light levels I would be unable to see my food clearly.

‘I was then told that I could eat in the bar area, but it was heaving with people. There was also low lighting in there, so I couldn’t see what was on my plate. I ended up in tears, it was a very upsetting experience.’

She claims that hotel staff had seen her guide dog, Ruby, when she checked in earlier that day and nothing was said.

And she added: ‘Staff also told my husband that they would reserve a table for us for breakfast the following morning, outside the dining room.

‘In the end we ate elsewhere for the rest of our stay, we only used the hotel as a place to sleep. I asked to speak to the manager and had to wait quite a while to do so.

‘When I eventually spoke to him I told him what had happened, and asked if he was aware of the Disability Act 2010.

Is it illegal to refuse access to a guide dog owner?

Guide dog and assistance dog owners have rights under the Equality Act 2010 (the Disability Discrimination Act (DDA) 1995 in Northern Ireland).

It is against the law for service providers to treat people with disabilities less favourably because of their disability.

This includes if they use disability related equipment such as a wheelchair or have a guide or assistance dog with them.

Businesses in the UK need to make ‘reasonable adjustments’.

This might mean giving extra help, such as guiding someone to a restaurant table, or making some changes to the way they provide their services to make it easier for blind and partially-sighted people to use them.

It includes allowing guide dogs and assistance dogs into almost all public places when accompanied by their owners.

Only in exceptional circumstances would it be considered inappropriate to refuse access to a guide dog and their owner.

‘He said he had not thought about it. I told him I would be taking it forward as staff need to receive awareness training to avoid situations like this happening again.’

Phil Mehrtens, general manager at The Fleece says that dogs are not allowed in that area of the restaurant, because there are some people with allergies.

He said: ‘We were really disappointed that the lady in question was not happy with her stay with us, particularly as we didn’t find that out until after she checked out.

‘The Fleece is a beautiful place to stay and eat with many different areas to enjoy food and drink.

‘There is one particular section which we don’t allow dogs in because there are some people with allergies and others who really don’t like dogs.

‘But this has never been an issue previously because there are so many different spaces within our inn and it’s exactly the same menu and service standards on offer.

‘However, after the lady who is partially sighted wrote to us with her experiences, we took on board her comments.

‘We have amended some of our operations so that this doesn’t happen again, and invited her back so she could have a much more positive stay.’

Kirstie Bower, director of skills, information and support at Guide Dogs, added: ‘Often establishments, businesses and services don’t fully understand their obligations in law, but ignorance is not an excuse.

‘This discrimination has a devastating impact on people’s lives, their confidence, and their sense of belonging to society.

‘We’re worried that the number of refusals reported to us may just be the tip of the iceberg, as one in four assistance dog owners tell us they find reporting an access refusal too difficult or time consuming.

‘Working with RNIB, we want to empower people with sight loss to take action against this illegal discrimination.’