A patient is being tested for HIV after discovering his hospital bed was smeared with another patient’s blood and is ‘demanding answers’ about how it happened from the NHS.

Paul Batty, 52, was rushed to Pinderfields Hospital two weeks ago with recurring stomach pains after a recent hip replacement.

After spending almost 24 hours in the hospital bed, he discovered a large smear of blood under his mattress and there was also blood marks down the side of the bed where it appears to have dripped. 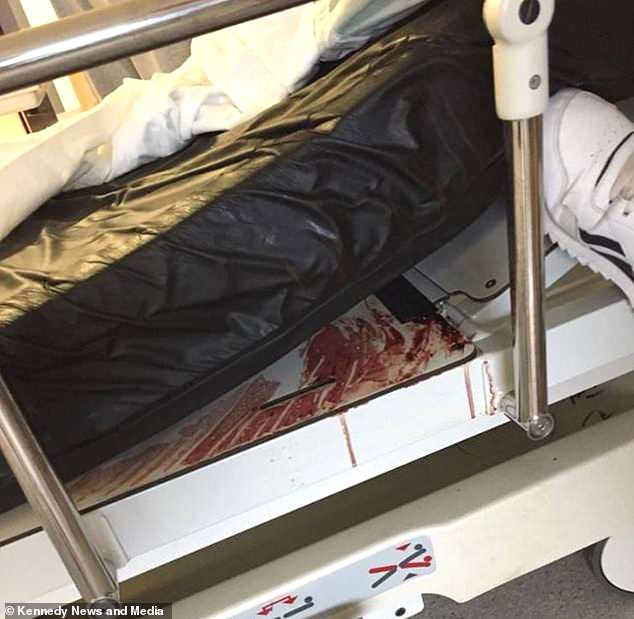 Paul Batty, 52, discovered a large smear of another person’s bed under his mattress and down the side of the bed

Paul, who is unsure how long the blood had been there, says he returned to hospital yesterday for blood tests to ensure he had not contracted HIV, Hepatitis A and Hepatitis B from the blood.

He will have to return to the hospital, which is in Wakefield, West Yorkshire, in three months for further tests and has filed a negligence complaint against it under advise from a medical professional.

Paul, from Fitzwilliam, West Yorkshire, who compares the hospital to ‘hell’, said: ‘I was in that bed for 24 hours. The more I thought about it, the more I realised how wrong it was.

‘My best friend had come with his wife and their pregnant daughter. It was his daughter who spotted the blood when I moved.

‘She said ‘is that your blood?’ When I pulled back to mattress that’s when I saw it all.

‘She said she’d rather have her baby in the street than go there.

‘They are so understaffed. Going from Pontefract General Infirmary where I had my hip operation to Pinderfields was like going from heaven to hell.

‘Pontefract couldn’t do enough for you – they were brilliant.

‘We still don’t know whose blood it was, how long it’d been there or where it’d come from.’ 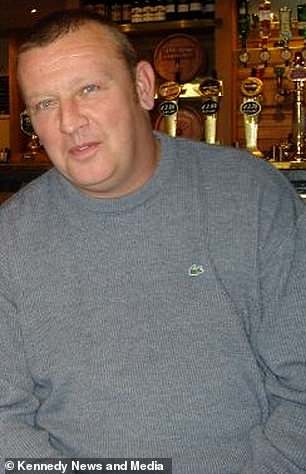 He added that he is speaking out in the hope it will not happen to anyone else.

Mid Yorkshire Hospitals NHS Trust said they were ‘extremely sorry’ yesterday and explained that the trolley had been removed and cleaned once it was raised to staff.

Paul was admitted to the hospital after becoming unwell with stomach pains on September 25 following a hip operation the week before.

He claims he wasn’t seen for five and a half hours, despite his pain worsening, and wasn’t offered any food until he’d been there for almost 12 hours.

Paul said: ‘In the end I said ‘if you don’t get me something to eat I’m going to discharge myself.’

‘At 12.15am, she brought me a sandwich and a cup of tea then I went to sleep until the following morning.’

It wasn’t until the following day when Paul’s best friend visited that he discovered that blood had smeared across the metal frame and down the side of the bed.

After his friend’s wife reported the discovery, Paul says he received an apology from a nurse on the ward.

He was then discharged before the bed was cleaned.

Paul said: ‘When I was put in the bed initially I hadn’t seen the blood underneath the mattress. I only noticed it half an hour before being discharged.

‘My friend’s wife came back with a nurse who just said ‘I’m terribly sorry – it must have come from A&E’.

‘Something needs to be done. I was looking at how to put a claim in because that’s medical negligence.

‘I don’t want to see anybody getting sacked – I just want to help other people and make sure no-one experiences this again.

Kate Firth, deputy director of nursing and quality at the Mid Yorkshire Hospitals NHS Trust, said: ‘We are extremely sorry for the experience that Mr Batty had whilst being cared for at Pinderfields.

‘The trolley in question was removed and thoroughly cleaned immediately [when] staff became aware.

‘Maintaining a high level of cleanliness and hygiene is extremely important for us at all times.

‘Since this incident we have taken steps to ensure our support staff are fully reminded of the procedures and protocols they should adhere to.’

Halsey looks rocker chic in a sheer blouse and combat boots at the Migos/Drake concert in LA
Kobe Bryant mourned: Stars honor the legend after he was killed in a helicopter crash
Ex-Tory MP Harvey Proctor reveals he is suffering from PTSD
China flexes its military muscle: Beijing exploits Covid crisis to assert control of South China Sea
SIX things you missed from the Champions League including Cristiano Ronaldo and David Beckham
Officials: Pentagon planning troop pullout from Afghanistan
Woman is rushed to hospital after a 'substance' was thrown at her
Girl, two, shot in the head with arrow from a crossbow