A statue of an angel by a celebrated sculptor is at the centre of a three-way battle between a film producer, a rich restaurateur and an art gallery.

The marble bust was created by Emily Young – who has been hailed as ‘Britain’s greatest living stone sculptor’ and has work outside St Paul’s Cathedral in London.

But the question of who owns the artwork has become the subject of a legal tug-of-war after it was put up for sale. 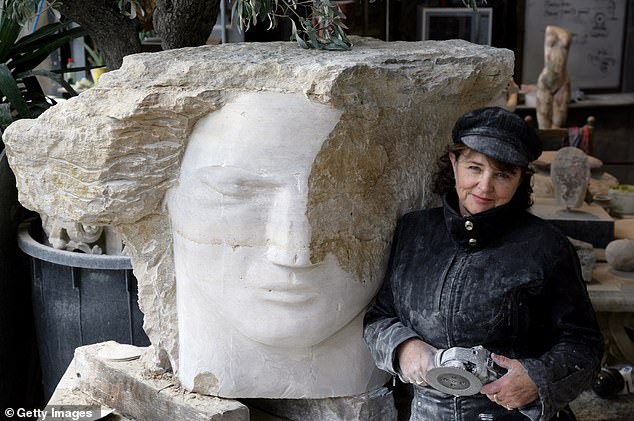 The pair agreed to keep the sculpture (pictured, Emily Young with another of her creations) in Mr Meyers’ home until a place was found to install it because a crane was required to move it

The two men agreed the sculpture would stay temporarily at Mr Meyers’ then £4million home in Chelsea, as ‘it required a crane and other specialist equipment to remove’, a court was told.

Mr Singh, one of the bosses of Japanese patisserie house Sakurado in Kensington, west London, claims they agreed to leave it in place until he decided where he wished to install it, court documents disclosed.

He says he was gobsmacked two and a half years later when he was browsing for art online in January 2018 and discovered that Bowman Sculpture in Mayfair was selling it for £175,000.

Mr Singh, 49, who also lives in a £4million house, is now suing both Bowman Sculpture Ltd and Mr Meyers. He wants a court ruling that the work is his property – plus damages for alleged ‘wrongful interference’.

His lawyers claim the gallery failed to make the ‘standard market searches of the Art Loss Register’ before acquiring the work in February 2017.

Mr Meyers, 56, and the gallery have ‘converted the sculpture to their own use’ by wrongly claiming the right to sell it, he insists. 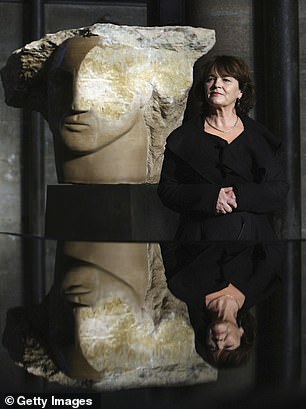 Mr Singh has already secured judgment against Mr Meyers on the issue of liability, his barrister Mark Stephens told the court.

The gallery denies any blame, insisting it bought the sculpture legitimately.

It was obtained ‘in good faith and without notice of the alleged previous sale to Mr Singh’, say its legal team.

The gallery has also been Ms Young’s ‘exclusive representative’ since 2016, its lawyers pointed out.

The statue has had a complex ownership history and was originally bought by Mr Meyers’ ex-wife Sharai in Edinburgh 18 years ago.

She is a highly successful Scottish businesswoman, who made millions dabbling in a range of fields, including fashion, design and leisure.

But the marble head became Mr Meyers’ property in 2011 after their divorce, Mr Singh’s lawyers say.

The case, which had a pre-trial hearing at the Central London County Court, will return to court at a later date.

Ex-City high-flyer Nicola Horlick has her guns trained on Parliament
Hollywood sex for roles actress was in a relationship with the director of her latest movie
Baltimore TV anchor is fired over 'racist and sexist' question
Trump says refused to meet Canada's Trudeau at UN
Ruth Davidson gives Boris Johnson a huge boost as former critic hails him as man to handle Brexit
Man in hospital after stabbing near Kew Gardens
David Beckham's fashion brand 'racked up nearly £11m of losses'
So, are Kylie Jenner's big sisters SEETHING about her $600m deal?