A 66-year-old pedestrian has died after he was hit by a Rolls Royce at Hyde Park Corner in central London.

Police were called to the road at 3am this morning after the collision, and the man was declared dead at the scene.

The driver involved in the collision stopped and there have been no arrests. A £240,000 purple Rolls Royce was seen inside the cordon as officers carried out their investigation.

The death crash comes in the middle of London’s supercar ‘season’, when the owners of luxury cars from around the world show off their vehicles in the capital. It is not known whether the car involved in foreign-registered. 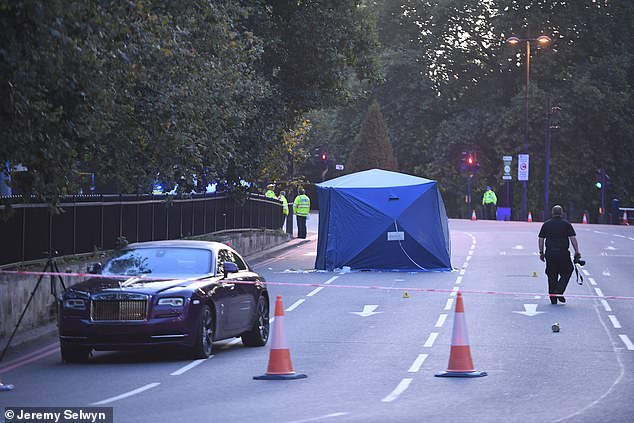 Police were called to the road at 3am this morning after the collision, and the man was declared dead at the scene. Pictured: A Rolls Royce at the scene

A blue tent had also been set up within the police tape, the Evening Standard reports.

A Scotland Yard spokeswoman said: ‘Officers were called on Thursday, 22 August at 03:14hrs to a report of a collision between a car and pedestrian at Hyde Park Corner.

‘The emergency services attended and found the pedestrian, a 66-year-old man, seriously injured. He was declared dead at the scene.

‘Extensive enquiries are being made to inform next of kin. The driver of the car, a purple Rolls Royce, stopped after the collision.

‘There have been no arrests. Enquiries continue.’

Road closures were put in place in the area after the incident. 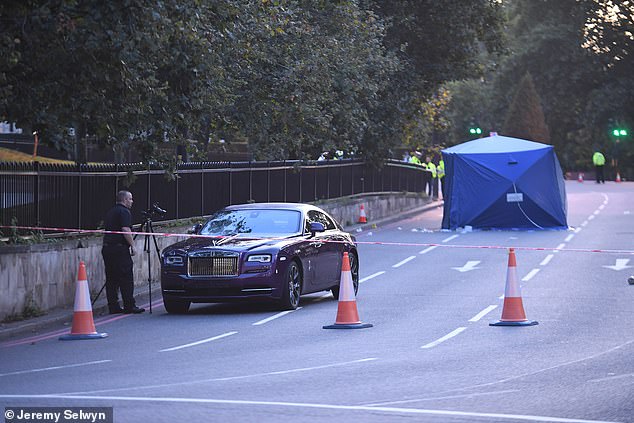 The driver involved in the collision stopped and there have been no arrests. A Rolls Royce car was seen inside the cordon as officers carried out their investigation

Detective Constable Chris May of the SCIU, said: ‘This is very busy section of road and I am sure there would be a number of people who witnessed the collision or the events leading up to it.

‘I would ask those people to contact police and in particular anyone who was in the area and may have dash cam footage.’

The police spokesman added: ‘Your information could be vital in helping us understand the cause of this tragic incident.

‘Any witnesses or anyone with any information is asked to call the SCIU on 0208543 5157 or contact via Twitter @MetCC.

‘Quote CAD 860/22AUG.To give information anonymously contact Crimestoppers on 0800 555 111 or online at crimestoppers-uk.org.’

Ex-headteacher, 65, stricken by motor neurone disease prepares to end his life at Dignitas
Killer who decapitated eight-month-old girl will be executed with a gunshot
Millennials are more comfortable revealing their salary than any other generation
Harry and Meghan are to continue running trademarked Sussex Royal brand
Ex-BBC Radio 1 star Dianne Oxberry dies after 'short illness' aged 51
Will Prince Harry's PR pal lead his mission to Namibia?
Wedding guest is branded "sad" for watching football during the mother-son dance at the reception
Russian spies 'infiltrated company that processes British visa applications'