The family of a former NHS worker who now suffers from dementia was left furious after she was left unattended on a trolley in A&E for six hours.

Jill Woolley, 88, worked as a medical secretary before she retired and was diagnosed with dementia in June.

Her relatives have been forced to watch her health decline ever since, but her daughter was particularly worried when she reacted badly to anxiety medication she was taking on Monday.

Samantha Tuck, 54, of Nuthall, Nottinghamshire, called her GP desperate for advice after her mother starting ‘falling in and out of consciousness’ that afternoon.

The surgery urged to call an ambulance and she was rushed to Queen’s Medical Centre in Nottingham, where she was left waiting in an A&E corridor for hours, her family claims.

Doctors later found she had a mild urinary infection and she should not have been prescribed the medication. 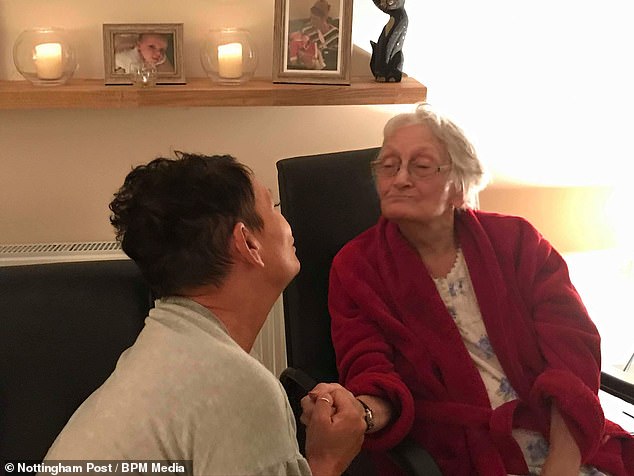 Jill Woolley, 88, (pictured with daughter Samantha Tuck, 54) worked as an NHS medical secretary before she retired and was diagnosed with dementia in June

Her daughter said: ‘They originally said they would get a GP to come and see her or phone her and none of that happened. They just said ‘it’s still on our system.’

‘We couldn’t get her to the surgery because she couldn’t walk. I feel hurt and upset and like she has been neglected.

‘She is lucky because she has me to defend her – what about all the other people out there that are just left alone? 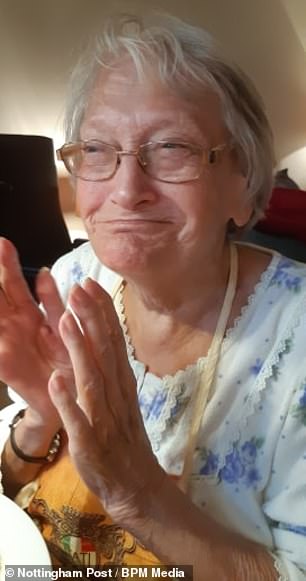 The 88-year-old was forced to wait for six hours in A&E on a trolley, her family claims

‘There must be thousands out there suffering. Dementia is looked upon as you are just old. I am grieving for my mum and she is alive.’

Her family claim she should not have gone to hospital in the first place.

Mrs Tuck continued: ‘All we wanted was for a doctor or nurse to check her vitals over but we had to call paramedics and then she had to go through the trauma of lying on a trolley in the A&E department for six hours.

‘Just because of the tablets her doctor prescribed her. A GP or nurse could have dealt with her.

‘It was a waste of the paramedics’ resources because they were here for over an hour.

‘She was just a name on the screen and no one was doing anything about it. The elderly are treated so poorly.’

When her daughter rang her doctors’ surgery, Billborough Medical Centre, at 9.30am, she was offered a home visit or call with the doctor.

But when her mother was losing consciousness at 2pm, they told her to go to hospital.

A spokesman for Nottingham City GP Alliance (NCGPA), who manages Bilborough Medical Centre, refused to go into the details of her case. 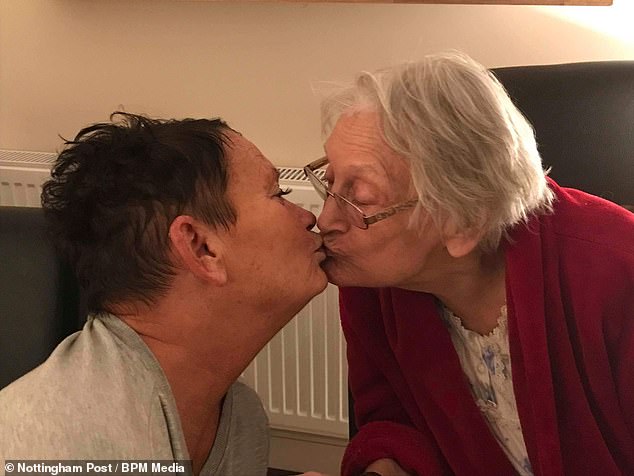 Samantha Tuck, 54, (pictured with her) of Nuthall, Nottinghamshire, called her GP desperate for advice after her mother starting ‘falling in and out of consciousness’ on Monday

‘Our practice team are liaising with the family directly and are providing support.’

Lisa Kelly, chief operating officer, said: ‘A significant increase in the number of very poorly patients needing emergency care has meant that our services are under considerable pressure.

‘I would like to apologise to Ms Woolley and her family for their wait in ED, and to any patient who has had to wait longer for their care than we would ideally like as a result of the very sick patients we have been treating.

‘Staff are working really hard to manage the current pressures and ensure that patients are cared for safely.

‘We are working with primary and community colleagues so that only patients that need to come to hospital to.’ 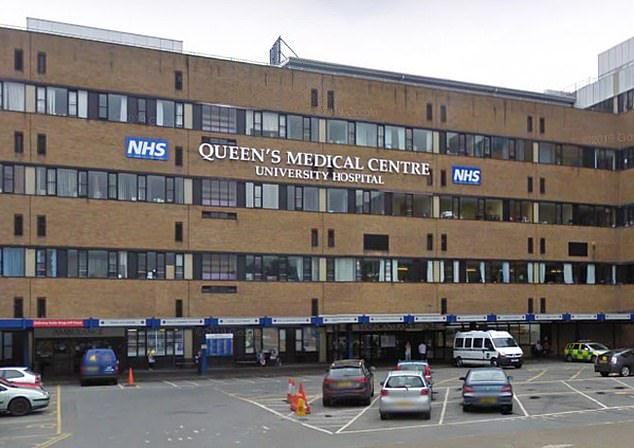 The surgery urged to call an ambulance and she was rushed to Queen’s Medical Centre in Nottingham, where she was ‘left waiting in an A&E corridor for hours’

Dr Hugh Porter, GP and clinical chair of NHS Nottingham City CCG, said: ‘Our local GP practices and hospitals are under intense pressure at the moment, working to cope with a growing number of patients suffering with the effects of winter illnesses.

‘But despite growing demand, local practices are using more resourceful ways to offer patients access to both routine and urgent appointments.

‘People can now access weekend and evening appointments wherever they live across Nottingham and Nottinghamshire.

‘Patients can also book appointments at the local Urgent Care Centre on London Road via the NHS 111 service.

‘This means they can book an appointment for the same day instead of using the walk-in service.

‘The NHS 111 service now offers advice from healthcare professionals who can provide practical support as well as information about local services.

‘Local people can also help ensure we can treat patients in the most clinically appropriate setting by using services wisely.

‘If you have an urgent medical problem and you’re not sure what to do, go straight to NHS 111. For life threatening emergencies you should still call 999.

‘We would particularly urge people who are aged 65 or over to get the flu jab as the best way to protect against the illness this winter.’

Britain's top 100 influencers revealed: Gamers, lifestyle and fitness vloggers
Tears at funeral for 86 Muslim victims of one of the worst massacres of the Bosnian war
How Ed Sheeran's manager who started off working at a chicken factory made £30m last year
Eric the dog who was the thinnest pooch animal rescuers had ever seen alive recovers
Owners of a manor reputedly home to Cromwell's remains are accused of 'sacrificing' nearby village
More than 1,000 people are evacuated on holiday island Gran Canaria
First coronavirus death in Europe: Chinese tourist DIES in French hospital
Coronavirus UK: Traffic returns to roads and queues form