Boris Johnson will break his pledge not to extend the Brexit ‘transition’ period, the EU’s trade chief predicted yesterday.

In a highly provocative intervention, EU trade commissioner Phil Hogan insisted Mr Johnson would cave and agree to keep Britain locked inside the bloc’s single market and customs union beyond the end of next year.

Referring to the prime minister’s broken promise of getting Brexit done by October 31, he said: ‘In the past, we saw the way the prime minister promised to die in the ditch rather than extend the deadline for Brexit, only for him to do just that. 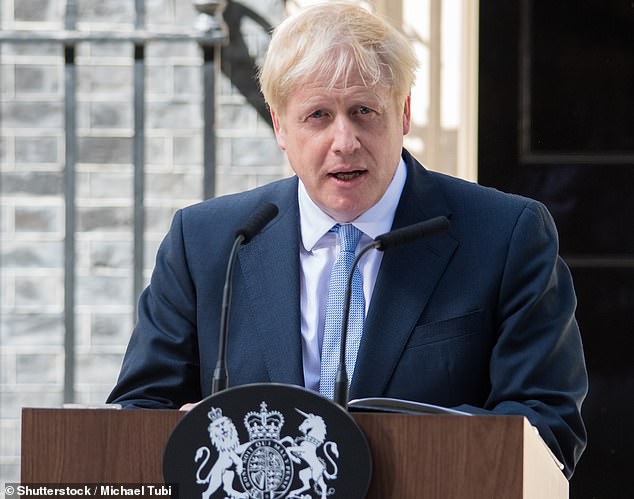 Boris Johnson (pictured) will break his pledge not to extend the Brexit ‘transition’ period, the EU’s trade chief predicted yesterday

‘I don’t believe prime minister Johnson will die in the ditch over the timeline for the future relationship either.’

As it stands, Britain will leave the EU’s institutions on January 31, but will remain inside its single market and customs union during the ‘transition’ period, which is due to finish at the end of next year.

However, under the terms of the withdrawal treaty there is the option of extending it for up to two years.

Any extension would mean Britain continuing to accept freedom of movement and paying membership fees.

Mr Johnson has ruled this out and even begun the process of making any more delays illegal.

But speaking to the Irish Times, Mr Hogan dismissed the move as merely a ‘stunt’.

He said: ‘At first sight this seems very odd indeed. From our point of view it is important that we move from stunt to substance.

‘It would be helpful if the focus was on content rather than timetables.’ 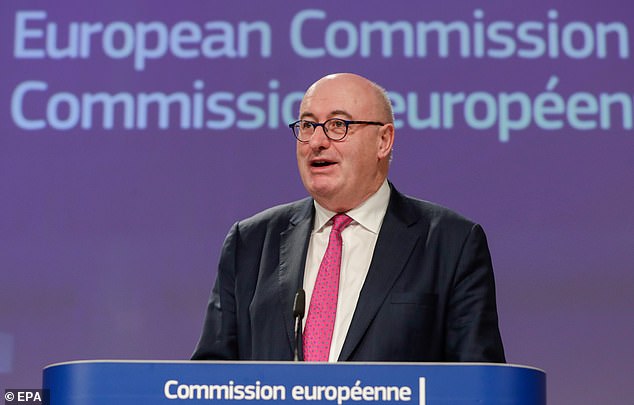 In a highly provocative intervention, EU trade commissioner Phil Hogan (pictured) insisted Mr Johnson would cave and agree to keep Britain locked inside the bloc’s single market and customs union beyond the end of next year

Throwing down the gauntlet, he added: ‘Too much of the debate in the UK over the past four years was based on the false notion that it is possible to make a clean-break Brexit while retaining all the benefits of EU membership.

‘Now that the political deadlock at Westminster is broken the next phase of Brexit needs to be based on realism and hard facts.

‘Any ‘having our cake and eat it’ rhetoric will not fly. Both sides need to proceed calmly and coherently.’

The Irishman will head up the post-Brexit trade talks alongside the bloc’s chief negotiator Michel Barnier.

It comes after EU Commission president Ursula von der Leyen said she had ‘serious concerns’ about Mr Johnson’s timeframe of striking a trade deal by the end of next year.

Either side can request an extension to the transition period, but the UK and EU must finalise any agreement on whether to do so by July 1 next year.

Mr Hogan said that the prime minister had delivered a ‘very impressive’ majority at the general election and should now ‘show leadership and use that majority for the good of the nation’.

He also dismissed the idea that the UK can get the tariff and quota-free trade deal it wants without remaining tied to Brussels standards on goods.

He said: ‘We all have to come to terms with the reality that Brexit means there will be two markets, not a single market.’ 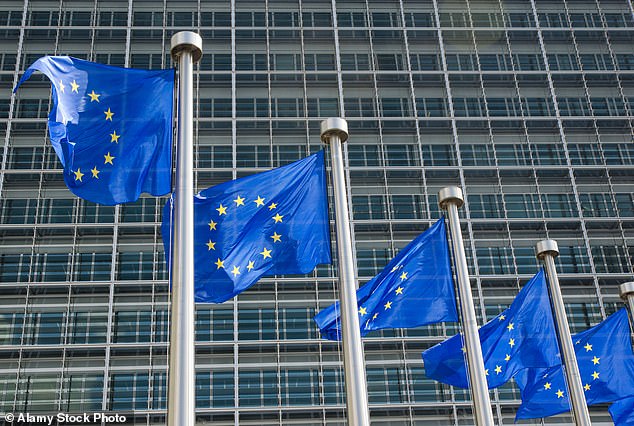 EU officials say only a ‘bare bones’ trade deal will be possible in the 11-month window after Britain leaves on January 31.

It opens up the possibility of a new economic ‘cliff-edge’ at the end of 2020 if the transition is not extended and both sides fail to reach a trade deal by then.

Many in Brussels believe the prime minister is ‘tying his hands behind his back’ by pledging not to extend the transition period, and that they may be able to force him into making concessions to meet the target.

One EU diplomat said: ‘Given the difficult nature of negotiations and the risk of another cliff edge at the end of 2020, it doesn’t seem very logical to immediately close the door to an extension.

‘If you deliberately tie your hands behind your back, you better make sure you can do a David Copperfield [the American escape artist].

‘Otherwise you might run out of options when the heat starts to rise during negotiations.’

CHRISTOPHER STEVENS reviews last night's TV: £80 for a high-tech mug to keep tea hot!
Delightful photos celebrate 100 years of women in the Met Police
Catholic devotees volunteer to be crucified as part of a Good Friday ritual in the Philippines
Touchdown on Mars! NASA’s InSight rover survives ‘six and a half minutes of terror’ landing
Theresa May and the German leader burst out into laughter together at EU summit
Mother, 23, tricked grandfather into admitting he sexually abused her as a child as he is jailed
David Warner opens up about rumoured feud with Steve Smith after coming face to face in cricket game
Prince Andrew tells pals he WILL talk to the FBI