Theresa May is desperately battling to cling on to the Tory leadership today at a behind-closed doors showdown with senior MPs.

The Prime Minister is pleading her case at a meeting with around a dozen members of the powerful 1922 committee in her Commons office – amid warnings that there will be ‘blood on the walls’ if she refuses to set a departure date.

One MP attending told MailOnline they were expecting the atmosphere to be ‘brutal’, despite Mrs May attempting to defuse tensions by promising a decisive vote on the EU Withdrawal Bill within a fortnight.

More pressure was heaped on the premier this morning as a poll found her ratings had slumped to their worst ever – with 69 per cent saying they were dissatisfied with her performance.

Underlining the mortal threat posed by Nigel Farage’s Brexit Party, Tory support has also plummeted to just 25 per cent – the lowest for 17 years – according to the Ipsos MORI survey for the Standard.

Labour was only just ahead on 27 per cent when people were asked which way they would vote in a general election, while the Brexit Party was on 16 per cent and the Lib Dems on 15 per cent.

Nick Timothy, Mrs May’s former chief of staff, said today that it is ‘beyond time for the Prime Minister to accept the game is up’, adding she ‘risks killing the Conservatives for good’.

‘Her premiership has failed – her authority is shot. Every day wasted from here makes life harder for whoever leads Britain into the future. We need to end this national humiliation’, he said.

Mrs May’s Commons office is deep in the heart of parliament, away from prying eyes – and the 1922 members have been urged not to leak details.

Insiders are calling it one of the most important meeting since the Tory committee of backbenchers was formed in 1923 because the party is on the verge of civil war over Brexit.

Some Tories want her to stay – claiming it won’t solve their Brexit conundrum – with one telling MailOnline: ‘Changing the pilot doesn’t change the weather’.

Even fierce critics of the premier are grim gloomy about their prospects of getting her out quickly, with one saying: ‘It should be the end. But with Theresa is only happens when it happens.’ 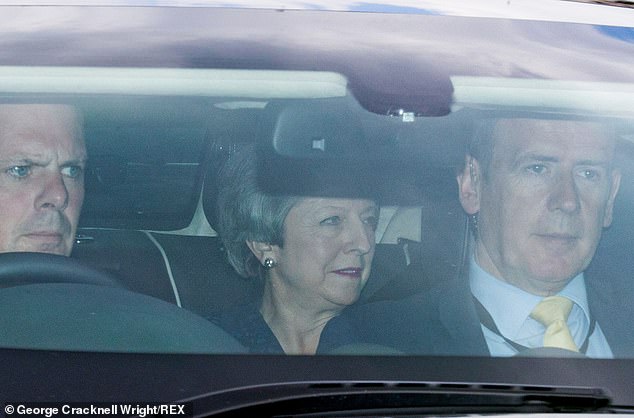 Theresa May pictured arriving at the Commons today, where she is pleading her case at a behind-closed-doors meeting with around a dozen members of the powerful 1922 committee 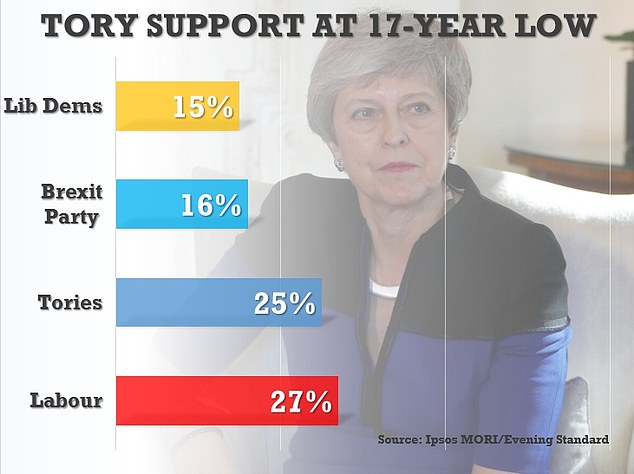 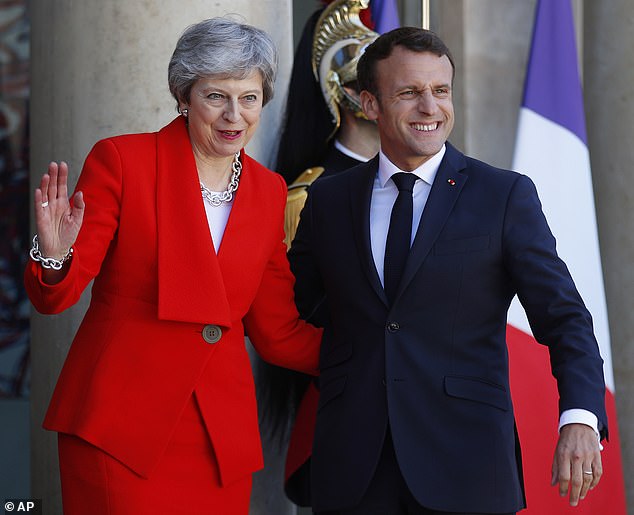 Theresa May, pictured in Paris with French President Emmanuel Macron last night, is facing demands to name the date she will quit

The Prime Minister was in Paris last night for talks with Emmanuel Macron and EU leaders on how to eliminate violent and terrorist content from the internet.

MPs will get a vote on the Withdrawal Agreement Bill in the first week of June, Brexit Secretary Steve Barclay said today, setting up a busy few days for the Government.

The legislation will be tables in the week beginning June 3, which is also when US president Donald Trump and his wife Melania visit the UK.

They will be in the country from Monday June 3 to Wednesday June 5.

On Thursday June 6, a by-election will be held in Peterborough to find a replacement for MP Fiona Onasanya, who lost her seat through a recall petition after serving time in prison for lying about a speeding offence.

There are also due to be a host of events to commemorate the 75th anniversary of D-Day the same day.

Back home she is insisting she won’t quit until a Brexit deal is passed – but talks with Labour have hit the buffers as they demand a customs union and ponder making a second referendum the price of any deal.

And more than 100 Tory MPs are predicted to vote against the EU Withdrawal Agreement Bill (WAB), which was defeated by 58 votes in March.

With the Brexit Party also expected to hammer the Conservatives in the European elections on May 23, there is a clamour for the PM to go to way for a new leader by the summer.

Mrs May’s Brexit deal could be ‘dead’ in weeks, Cabinet ministers warned yesterday, as sources claimed that the June vote could be her final act as Prime Minister as grassroots members are planning a vote of no confidence.

1922 Committee treasurer Sir Geoffrey Clifton-Brown said today: ‘It would be infinitely preferable if she set a date rather than us force her out.

‘It’s better that she does it than we have a vote of confidence. What I would like to see is her set out a timetable to trigger a leadership contest.’

After the talks with the Prime Minister, the 1922 Committee executive will hold a private meeting where changes to Tory leadership contest rules could be discussed, according to sources.

At present, Mrs May cannot be challenged again as leader until December.

Tory MP Andrew Bridgen: ‘I would like to see the 22 give her a timetable to stand down. And, if she does not accept that timetable, tell her we will have another vote of confidence after the European elections.’

Prominent Brexiteer Mark Francois said that a predicted poor Tory showing in next week’s European Parliament elections would heap pressure on Mrs May to go.

He said: ‘As the polls increasingly suggest, we are going to have an extremely difficult night in the European elections.

‘And, because they are announced on a council by council basis, every MP will be able to reverse engineer the result in their own constituency.

‘At that point, I believe, my colleagues will finally wake up and smell the coffee if they have not, indeed, done so already.’ 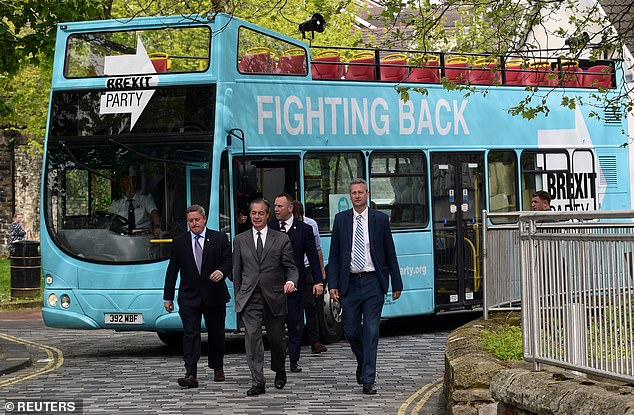 The Brexit Party led by Nigel Farage (front and centre in Merthyr Tydfil, Wales last night) is leading the polls for the European elections, with the Tories languishing in fifth

It came as Tory hardliners, the DUP and Labour lined up to say they would vote it down a fourth time.

Brexit Secretary Steve Barclay and International Trade Secretary Liam Fox both warned that another rejection could lead to Brexit being cancelled.

Truss: Why I’d back no deal

Liz Truss said last night she would support No Deal if presented with a choice between that and revoking Brexit altogether.

The Chief Secretary to the Treasury, who is positioning herself to succeed Theresa May as Tory leader, said her ‘ideal option’ would be to get a deal.

But asked if she agreed that the only way to stave off Nigel Farage’s Brexit Party was to embrace No Deal, she replied: ‘If we face a straight choice between revoking Brexit and No Deal-ing, we have to No Deal. It’s a matter of trust.’

Some ministers fear the EU will refuse to postpone Britain’s departure again in October when the current deadline falls.

Miss Truss said: ‘We’re living in a kind of purgatory at the moment waiting for something to happen.’

The Prime Minister will today appeal to Tory grandees for a stay of execution while she makes a final attempt to pass her Brexit deal in just over a fortnight.

The executive body of the 1922 Committee of backbench Tory MPs will meet Mrs May this morning to decide whether to change the party’s leadership rules and allow a fresh contest that could see her forced out within weeks.

Asked if the new vote would be considered a ‘confidence vote’ for Mrs May, a No 10 source said: ‘That’s not the world we are currently in but clearly the significance of this legislation can’t – and I suspect won’t – be underestimated.’

Mr Barclay told MPs the deal negotiated by Mrs May with Brussels would be ‘dead’ if MPs rejected it again, raising questions about whether the UK would ever leave the EU.

Dr Fox, meanwhile, told an event in London: ‘MPs will have to look and see if they want to continue down a path that inexorably takes us to either the potential revocation of Article 50 or leaving without a deal, and ask themselves if that’s the best course democratically or economically for the UK. MPs will have to face that decision.’

Last night Eurosceptic MPs were lobbying members of the 1922 Committee’s 18-strong executive to ignore Mrs May’s pleas and pull the plug on her today.

One former Cabinet minister said her decision to promise a new vote on her Brexit deal next month was ‘just a scam to try and head off the 1922 Committee changing the leadership rules’, adding: ‘They have to see through it. She cannot be allowed out of that room without giving a date for her departure.’ 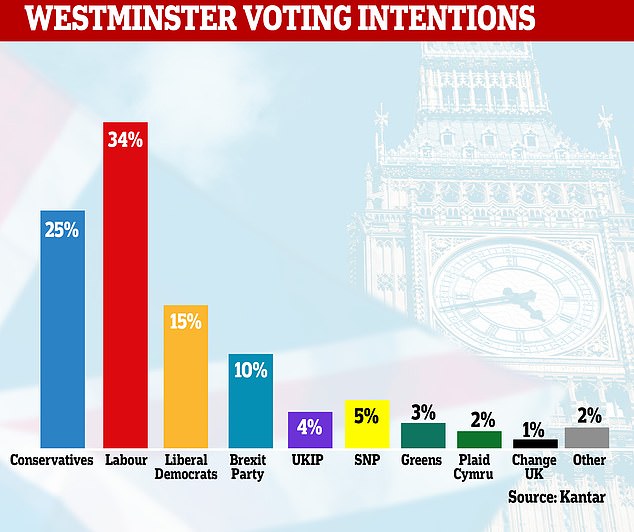 Labour is also increasing the gap between them and the Tories, a new opinion poll revealed this week

The scale of the problem facing the two main parties over Brexit has been laid bare in a new poll which reveals fewer than one in five people think Labour or the Conservative Party have a clear policy.

Research from YouGov shows that 13 per cent of voters think Labour has a clear Brexit policy, while 17 per cent think the Conservatives do.

Just 21 per cent of Labour voters in 2017 thought Labour had clear Brexit policy, while 26 per cent of their Tory counterparts said the same of the Conservatives.

The two largest parties were the least clear on Brexit of all the national parties, according to the poll.

In the YouGov poll, the Brexit Party was the only party that a majority thought was clear on the issue, with 59 per cent of respondents saying it had understandable policy.

The Liberal Democrats were perceived to be the clearest of the anti-Brexit parties, with 41 per cent of the whole sample and just over half of Remain voters saying they thought policy was clear.

The Greens and Change UK, which are both campaigning for a second referendum on Brexit, saw around a third of people (34 per cent and 31 per cent respectively) that thought their policy was clear.

Opinion on the executive committee was said to be finely balanced after a ‘heated’ meeting last night.

Last month, members voted by nine to seven against changing the rules to allow a fresh vote of confidence in Mrs May’s leadership. Instead, they demanded a clear timetable for her departure.

Sir Geoffrey Clifton-Brown, treasurer of the 1922 Committee, said yesterday it was ‘sadly now time to hand over the reins to someone else with fresh ideas and the moral authority to lead the party’.

Chairman Sir Graham Brady, who has favoured a ‘dignified’ departure for Mrs May, is also said to have hardened his position, and this week signed a letter criticising her decision to open talks on a soft Brexit deal with Labour.

No 10 confirmed yesterday that MPs will be asked to vote on the Withdrawal Agreement Bill in the week beginning on June 3.

Mrs May urged MPs on all sides to back the deal, saying: ‘This is the Bill that delivers Brexit.’ But a Shadow Cabinet minister told the Mail: ‘Jeremy [Corbyn] might be happy to let this Brexit deal go through but there is no way the party will let it happen.’

Mrs May’s DUP partners also ruled out backing the deal while it contains the Irish backstop.

And hardline Eurosceptics, whose opposition has scuppered the deal three times, indicated they would not back down.

Former Cabinet minister Owen Paterson said: ‘Sadly, we will vote against it again because it doesn’t change the essential nature of the withdrawal agreement, which is unacceptable.’