Theresa May’s Brexit plans have come under intense pressure after a bombshell ministerial resignation amid grave warnings from the DUP that they may withdraw vital Commons support for the proposals.

Jo Johnson’s announcement on Friday afternoon that he had quit as transport minister saw pro-EU and arch-Brexiteers in the Conservative Party unite to attack the Prime Minister’s stance.

Calling for a second referendum to be held on Brexit, Mr Johnson denounced the choice between her deal or no-deal as a “failure of British statecraft on a scale unseen since the Suez crisis” that had left Britain facing “vassalage” or “chaos”.

His dramatic resignation, delivered as Mrs May travelled to France to take part in Armistice centennial commemorations, sparked speculation that the PM could face further Cabinet departures in the coming days.

This is not taking back control. It is a surrender of control. It does not remotely correspond to the mandate of the people in June 2016 2/2

Tory MP Anna Soubry, a vociferous Remain campaigner, said she had “huge respect” for Mr Johnson, telling The Guardian: “Jo isn’t the only minister who shares these views and I hope others will follow his lead.”

Ahead of a conference of the Eurosceptic Bruges Group on Saturday, Tory MP Mark Francois also said further ministerial resignations could not be ruled out.

He told the BBC: “When we get the final deal, and it feels like that’s not very far away, Cabinet ministers will have to look into their hearts and see whether or not they feel they can support it.

“And, if they can’t, because they believe it’s a bad deal for the country, then, honourably, they would have to resign.” 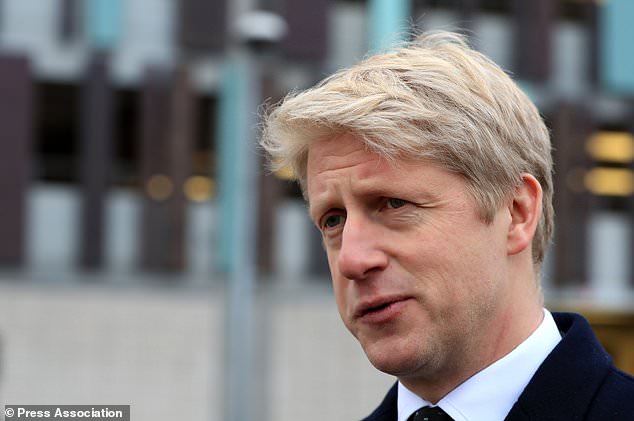 Mr Johnson’s dramatic move to exit Government, four months after his brother Boris dealt Mrs May a political blow by walking out of Cabinet, took Westminster by surprise.

However, his call for a new Brexit referendum was attacked by Mrs May’s supporters.

Children and Families Minister Nadhim Zahawi cautioned against a new poll, telling the BBC such a move would “unleash forces that no politician… would actually know where it would end up”.

Downing Street spokesman said the referendum “was the biggest democratic exercise in this country’s history”.

“We will not under any circumstances have a second referendum,” a spokesman said.

“The Prime Minister thanks Jo Johnson for his work in Government.”

Amid the Tory infighting, DUP leader Arlene Foster made it clear her party would vote against the PM’s current proposals, warning such an agreement would leave the UK “handcuffed” to the EU with a sea border between Northern Ireland and the rest of Britain.

Writing in Saturday’s Daily Telegraph, she said she had raised DUP concerns with Mrs May, but the PM’s response failed to allay their fears.

“If what is outlined in the reply is the type of deal the Prime Minister intends to conclude, then the DUP could not support a deal which annexes Northern Ireland from the rest of the United Kingdom,” she wrote.

“The ‘new’ idea of a UK customs arrangement does not appear to be a genuinely UK-wide offer but a GB offer and an NI offer badged as one – Northern Ireland in THE EU customs territory and GB in A customs union.

“The real intent is not to solve any land border issues in Ireland but to handcuff the UK to the EU, with the EU holding the keys. The United Kingdom would be trapped.”

Without mentioning the Prime Minister, she added: “We are ready to stand with those in Cabinet and in Parliament to work for a better deal. One which works for the whole United Kingdom.”

Mr Johnson said that Mrs May’s Brexit plan is “riddled with such contradictions as to make no sense at all now at any level”.

After detailing his decision to quit in a blog post, he told the Daily Mail: “It is a fake fudge. It was meant to be about sovereignty and trade deals, but we’re going to have no capacity to make meaningful trade deals.

“It was meant to be about a brave new future as a deregulated economy. But we’re signing up to the common rule book on standards and health and safety, the environment and all the rest of it. It’s completely incoherent.”

Boris Johnson backed his brother’s decision to quit, saying: “We may not have agreed about Brexit but we are united in dismay at the intellectually and politically indefensible of the UK position.”

Speaking of his brother, Jo Johnson acknowledged that the Brexit negotiations “have at least united us in fraternal dismay”.

Asked by German magazine Der Spiegel if he would stop Brexit if he could, the Labour leader said: “We can’t stop it.

“The referendum took place. Article 50 has been triggered. What we can do is recognise the reasons why people voted Leave.”

Come on Chancellor Rishi Sunak, brew up a new pensioner bond
Prince Harry and red-head girl bond over hair colour - as Meghan reveals Archie is also ginger
Pink salmon are threatening populations of orcas
The Brit who has been stranded in a US hospital for a YEAR
Kate Middleton ends maternity leave with visit to wildlife garden
Iran 'tried to shoot down US drone over Gulf of Oman tankers attack site to intercept surveillance'
Irina Shayk flaunts flawless legs in racy floral dress for book launch party in New York City
Children sing outside with no coats while Ruth and Eamonn wrap up