A restaurateur to the stars and former Government adviser who has rubbed shoulders with Prime Ministers has been arrested on suspicion of modern-day slavery.

It is understood Mr Ali has been released under investigation.

As organiser of the annual British Curry Awards, Mr Ali is a high-profile figure who has been pictured with Boris Johnson, Theresa May and David Cameron. 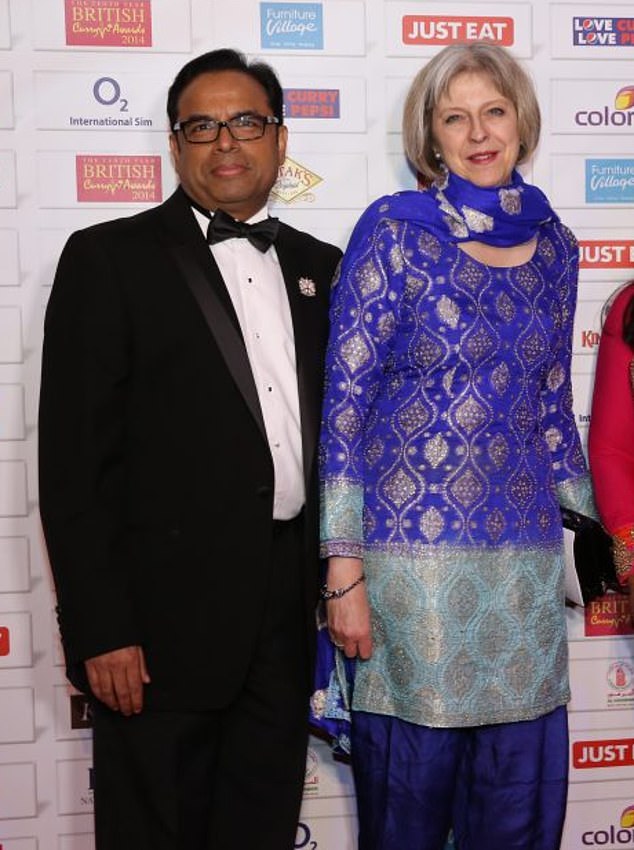 Enam Ali, 58, pictured with Theresa May at the Curry Awards in 2014, was arrested after police raided a restaurant in Surrey. It is understood he has been released under investigation

He was appointed to the Home Office advisory panel on the hospitality sector in 2008 and later lobbied Mr Cameron, then Prime Minister, to introduce so-called ‘vindaloo visas’ so workers from the Indian subcontinent could fill staff shortages in British curry houses.

The Mail on Sunday understands the investigation by Surrey police relates to the alleged mistreatment of a Bangladeshi former kitchen worker at Le Raj, in Epsom. During the raid, officers are understood to have removed documents and electronic devices.

In a statement, Surrey Police said: ‘A person was arrested on July 12 on suspicion of modern slavery offences and released under investigation.’

A source told The Mail on Sunday that the former worker claims he had to work long hours without pay, lived in poor conditions above the restaurant, was denied holidays and was kept on after his five-year visa had expired.

The man, who is now staying with relatives in West London, is believed to have submitted an application to remain in the UK on humanitarian grounds. 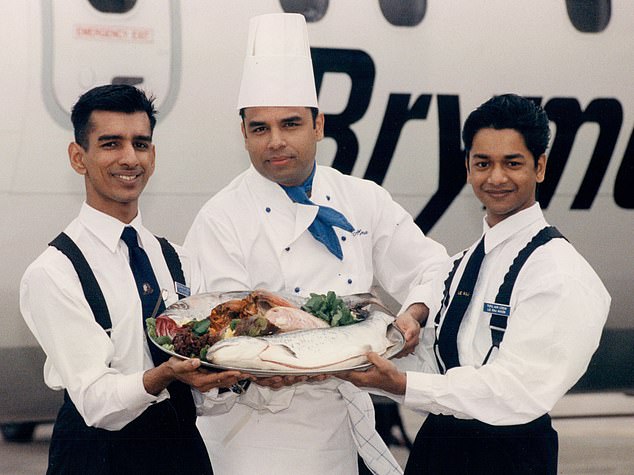 A source has claimed that a former worker said they had to work long hours without pay and live in poor conditions above the restaurant. Pictured is Mr Ali centre

The investigation into Mr Ali will be particularly embarrassing to Mrs May, who as Home Secretary launched a high-profile campaign to combat modern slavery.

Along with then Mayor of London Boris Johnson, she was a guest at the British Curry Awards in 2014 and posed for photographs wearing a traditional shalwar kameez dress beside Mr Ali.

Mr Cameron was guest of honour at the event in 2013, the same year Mr Ali gave £6,000 to the Conservative Party and three years before he was invited to No 10 and made the case for relaxing immigration rules to provide more staff for Indian restaurants. Other guests at the annual awards have included the Duchess of York.

Mr Ali, who was awarded an MBE in 2009 for his services to the hospitality industry, was born in what is now Bangladesh and came to Britain in his teens. He is a Brexiteer who believes leaving the EU will make it easier for Indian and Bangladeshi workers to get UK visas. 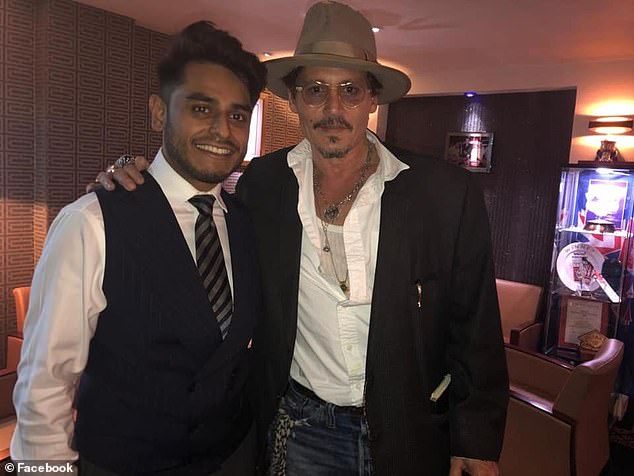 A-list diners have included actors Johnny Depp, pictured with a member of staff, and Pierce Brosnan have visted the Le Raj restaurant in Epsom 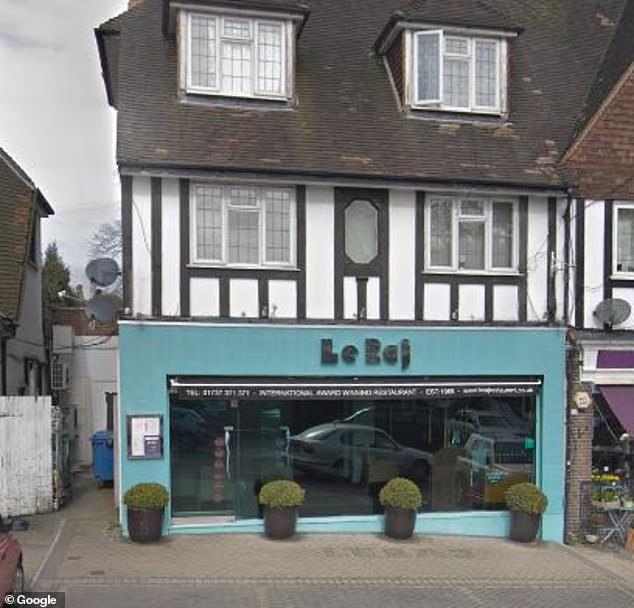 Le Raj, which opened in 1989, attracts a star-studded clientele. Its website features photographs of TV stars Eamonn Holmes, Shane Richie and Chris Tarrant and celebrity chefs Heston Blumenthal and James Martin. Johnny Depp dined at the oak-panelled restaurant two days before the police raid and was pictured with Mr Ali’s son. The Hollywood star was so impressed by Le Raj’s onion bhajis, he told staff he wanted to fly a batch back with him to Los Angeles.

Described on its website as ‘a dining experience like no other’, Le Raj was one of the official food suppliers to athletes at the 2012 London Olympics.

Last night, Mr Ali told the MoS that the alleged victim worked at Le Raj as an assistant chef on full pay until May 2015. His employment was terminated as soon as his visa expired.

Mr Ali also said that his son Jeffery, 27, took over the ownership of the restaurant in 2014, although he remains close to it.

Mr Ali added: ‘In May 2015, I was informed by the Home Office that an employee no longer had permission to work in the UK.

‘As a result, I had to discontinue his employment. These awful, false allegations have only been made more than four years later, which is just one reason why this has come as such a shock.

‘The allegations are false, incredibly damaging and deeply upsetting. I don’t understand the motivation behind these false claims.’

Bear Grylls' eye SWELLS UP after bee sting leaves him in life-threatening anaphylactic shock
Prince Charles and Nicola Sturgeon attend memorial service for Iolaire disaster
'Bambi' killer Jeremy Bamber claims he has found phone call evidence to set him free
Brexit: May vows to 'leave the EU with a deal as soon as possible'
UNSW researchers say platypuses are on the 'brink of extinction'
Coronavirus UK: Is government altering lockdown 'five tests'?
Businessman 'bludgeoned IT worker, 29, to death at flat where she was house sitting for a friend
Freedom at last! Rescue workers arrive to remove the final animals from Albanian 'zoo