A police diver found a knife that is believed to have been used to stab a teenager to death during a gang feud.

The knife is thought to have been hurled into a river by the killers of Tavis Spencer-Aitkens, 17, who died after being stabbed 15 times by rival gang members in Ipswich, Suffolk, on June 2 last year.

A search was launched in the River Gipping in Ipswich after witnesses in nearby flats reported seeing a ‘shiny object’ being hurled in the water. 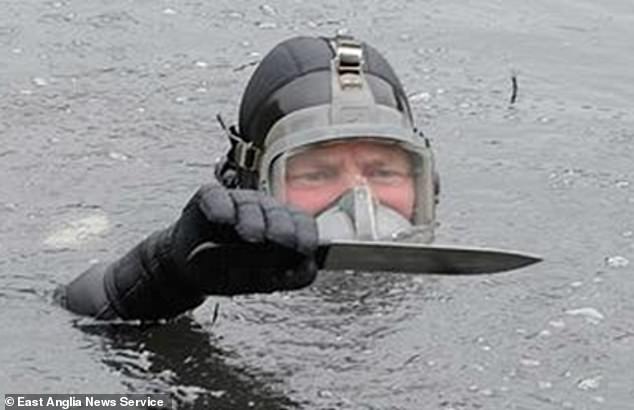 A police diver has found an eight-inch knife that is believed to have been used in the stabbing of 17-year-old Tavis Spencer-Aitkens in Ipswich, Suffolk 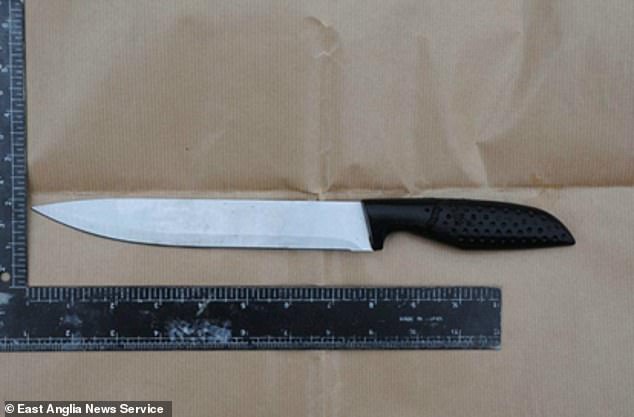 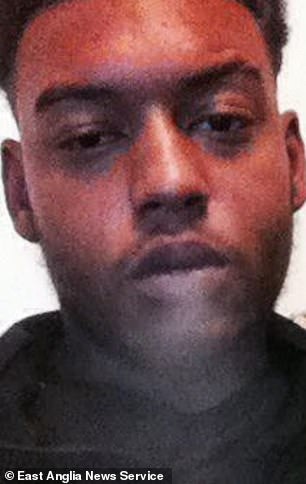 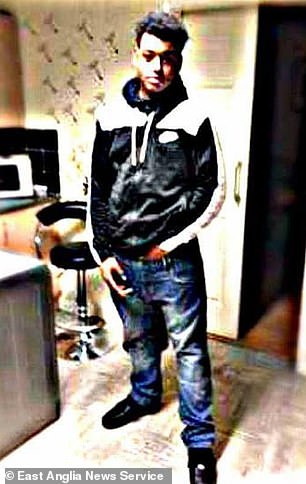 Tavis Spencer-Aitkens, 17, was attacked just yards from his family home in Ipswich on June 2 last year

The knife with an eight-inch blade was found eight days after Tavis was fatally attacked last year outside his father’s home in Ipswich.

Four members of a gang were last week convicted of murdering the teenager who had a bottle smashed over his head and was stabbed 15 times.

The trial at Ipswich Crown Court heard how all four killers were in a gang called J-Block which took its name from the Jubilee Park area of Ipswich.

The gang members were enemies of a rival gang which Tavis belonged to, called Neno or IP3 after the postcode of the Nacton area of Ipswich. 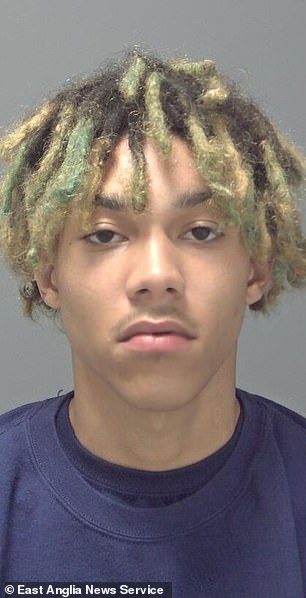 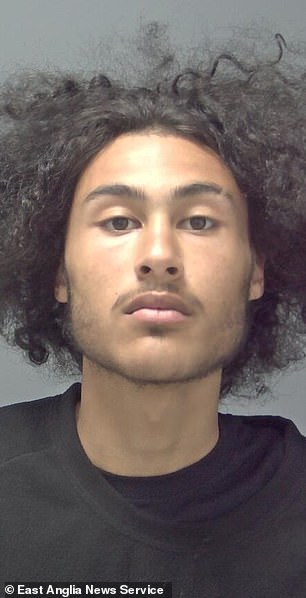 Kyries Davies, 17 (left), and Isaac Calver, 19 (right) have been found guilty of murdering Tavis Spencer-Aitkens. The duo rap under the names Youngz and Flex

Both gangs regularly recorded music and uploaded videos to YouTube making gun gestures and rapping about their hatred of their rivals.

The three month trial heard how Tavis was ‘butchered’ in a revenge attack after J-Block members Aristote Yenge, 23, and Kyries Davies who was then aged 16 suffered a loss of face.

The pair of ‘aspiring rappers’ were spotted by two friends of Tavis who pursued them into a Lush soap and cosmetics store in Ipswich town centre, shouting IP3 at them in front of terrified shoppers and staff.

Police stopped them from being attacked by making the friends of Tavis leave the store, the trial heard.

The incident represented ‘a moral victory’ for the Neno group as Yenge and Davies had hidden rather than standing their ground close to their group’s ‘home turf’, said prosecutor Oliver Glasgow QC. 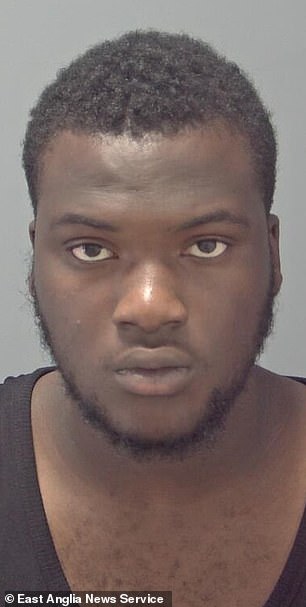 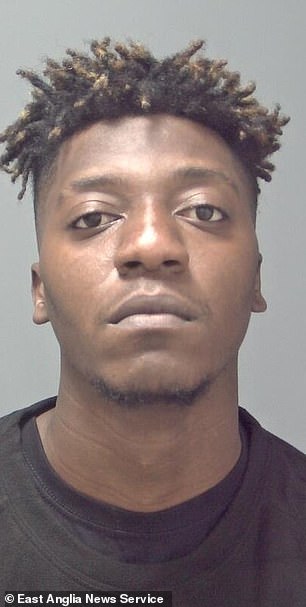 As a result, the pair rounded up some of their friends and went to the Nacton estate on a revenge mission two hours later.

Tavis was spotted by his rivals outside shops and followed into nearby Packard Avenue where he was attacked.

The van which transported the gang members was later seen near the River Gipping where the knife was dumped.

The trial heard how ‘unsurprisingly’ there was no blood or DNA on the knife, but it was believed to have been used in the murder.

Residents who saw the object being thrown into the water described it as being a dark-handled knife or machete and seeing ‘a flash when the blade caught the sun’.

Yenge, of no fixed abode, Davies, now 17, of Colchester, Essex, Adebayo Amusa, 20, of Barking, east London and Isaac Calver, 19, of Ipswich, were all convicted of murder after being linked to the attack by forensic and mobile phone evidence.

All had denied the charge. Judge Martyn Levett lifted an order banning identification of Davies who was known as Youngz and recorded several videos for his gang.

Another gang member Callum Plaats, 23, of Ipswich, who was captured on CCTV riding to the scene by bicycle was convicted of manslaughter, but found not guilty of murder. 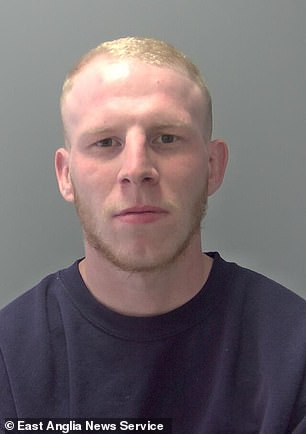 Callum Plaats, 23, from Ipswich, was cleared of murder but found guilty of manslaughter

All of them will be sentenced on April 29.

Leon Glasgow, 42, of no fixed address, who had used his colleague’s delivery van to take the four murderers to the scene was cleared of murder and manslaughter after he insisted he did not know what they were planning.

The court heard how Tavis’s step sister Candice Sobers rushed outside to find him lying on his side with blood on his face and clothing.

She asked him who had done it and he replied: ‘J-Block, man’ before adding, ‘There was too many of them’ as he began to struggle for breath.

Tavis’s father Neville Aitkens said outside court: ‘We’re very pleased with the convictions and are glad these defendants will now pay for their actions.

‘It has been a heartbreaking time and the loss of Tavis has shattered our lives.

‘To know these defendants will now be punished for their senseless crime and will face the consequences of their actions at least gives us some closure.

‘Tavis – our beautiful son, stepson, and brother, who we miss dearly – was brutally murdered and taken away from his loved ones.

‘Our lives have been changed forever. The pain has been unbearable. ‘Who were these people to judge Tavis? What right had they to take his life?

‘We will forever live with our broken hearts, but to know these defendants are off our streets, and the family and Tavis have justice, is welcoming.

Tavis’s mother, Sharon Box said: ‘Too many lives have been lost because of knife crime.

‘The pain we feel is indescribable. There is no escape from it.

‘Those who did so will never know how much we loved Tavis – and still do. If they could truly understand that, they would never have hurt him.

‘Tavis was cruelly and unnecessarily taken from us by uncaring, wicked individuals.

‘Their actions have robbed us of someone so precious and they deserved to be found guilty of killing my son.

‘If it was up to me I would never let them leave prison – never.’

He said: ‘Knives have no place on our streets and we must educate both children and young adults, who think that carrying one will make them safer and offer protection, that the reality is there is a greater risk that it will either be used by the person carrying it, or against them.

‘I don’t want to watch another family suffer as Tavis’ family have.

‘Knife crime is a societal issue and it is incumbent on all responsible authorities – including the police and councils – to work alongside the many support agencies and with local communities to eradicate this evil.’