NEW YORK (AP) – Two immigrant sisters from Saudi Arabia whose bodies washed up on the New York City waterfront, bound together with duct tape, had told people that they would rather harm themselves than go back to their home country, investigators said Friday.

The bodies of Tala Farea, 16, and Rotana Farea, 23, were discovered Oct. 24 near the Hudson River, two months after they were reported missing in Fairfax, Virginia, where they had been living in a shelter amid allegations that they were abused at home.

Police said the sisters had been in Manhattan since Sept. 1, staying at expensive hotels and ordering in pairs of meals until a credit card they were using maxed out. A jogger said he saw them praying at a playground near the river, sitting about 30 feet (9 meters) apart with their heads in their hands, hours before their bodies were found, police said.

New York City Police Chief of Detectives Dermot Shea said people who knew the Farea sisters in Virginia told investigators that they made statements within the last year indicating “that they would rather inflict harm on themselves – commit suicide – than return to Saudi Arabia.”

Shea stopped short of saying that the sisters had killed themselves but said police have “no credible information that any crime took place.” The medical examiner has yet to rule on their death and the case remains under investigation, he said.

The sisters’ bodies were taped together, facing each other and fully clothed, police said. There were no obvious signs of trauma and it appeared that they were alive when they went into the water, police said. 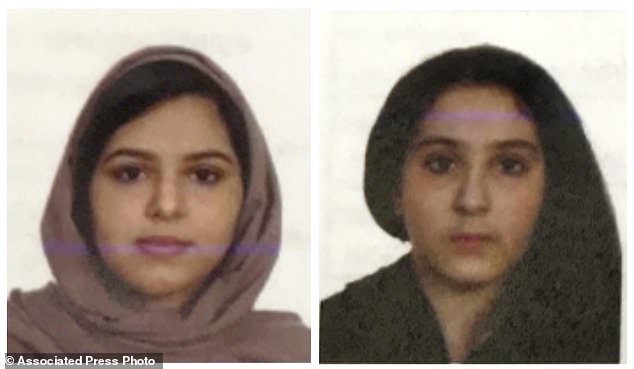 These two undated photos provided by the New York City Police Department (NYPD) show sisters Rotana, left, and Tala Farea, whose fully clothed bodies, bound together with tape and facing each other, were discovered on on the banks of New York City’s Hudson River waterfront on Oct. 24, 2018. The Farea sisters from Saudia Arabia, Rotana, 22 and Tala, 16, had been living in Fairfax, Virgina and were reported missing in August. Their mother told detectives the day before the bodies were discovered, she received a call from an official at the Saudi Arabian Embassy, ordering the family to leave the U.S. because her daughters had applied for political asylum, New York police said Tuesday Oct. 30, 2018. (NYPD via AP)

The mysterious deaths of the Farea sisters have drawn worldwide attention and fueled rampant speculation and online conspiracy theories in the wake of the Oct. 2 killing of journalist Jamal Khashoggi at a Saudi embassy in Turkey.

The sisters’ mother told detectives that the day before the bodies were discovered, she received a call from an official at the Saudi Arabian Embassy, ordering the family to leave the U.S. because her daughters had applied for asylum.

The Saudi Arabian Embassy has denied talking to the family about any asylum request.

Tala and Rotana moved to the U.S. from Saudi Arabia with their mother in 2015, settling in Fairfax, a suburb of Washington D.C., police said.

The sisters left their family home and were placed in a shelter-like facility after an earlier disappearance, in December 2017. At the time, Shea said, “It was raised that they were the subject of abuse.”

Rotana was enrolled at George Mason University, in Fairfax, but left in the spring.

The sisters were last seen in Virginia on Aug. 24. They were reported missing Sept. 12.

Police, citing credit card records, an Uber receipt and other evidence, said they arrived in New York City on Sept. 1 after making stops in Washington, D.C. and Philadelphia.

They appeared in good health on security video police located from about a week before their bodies were found, Shea said.

Police initially struggled to identify the bodies as much of the city and the country was transfixed by other news, such as the package bombs sent to a dozen prominent Democrats and CNN’s New York City bureau.

Police released sketches of the sister’s faces and posted repeated calls for the public’s help in identifying them on social media. Once they were identified, police sent detectives to Virginia to piece together the last months of their lives.

The jogger who said he saw the sisters praying went to the police on Wednesday. He told detectives it had been “haunting him,” Shea said.

The X Factor: Ayda Field flashes her toned legs in elaborate feathered gown
Monarch asks her subjects to 'speak well of each other and respect different points of view'
Unmasked: This is the 16-year-old who raped and murdered six-year-old Alesha MacPhail
Outrage as blind student, 25, is dragged 'by his ankles' out of Oxford Union debating chamber
Commuter stuck on slow train moans he is caught up in a 'British comical parody of Speed'
GMB weatherman Alex Beresford pays tribute to murdered cousin Nathaniel Armstrong, 29
The blunder that brought down the Berlin Wall thirty years on
Plucky Phoenix bullish despite first loss