Two policemen who tackled knife-wielding jihadists during the London Bridge terror attack were awarded the George Medal by the Queen for their bravery.

Off-duty officer PC Guenigault was out with friends in the London Bridge area when the terrorists smashed their van into a nearby restaurant. 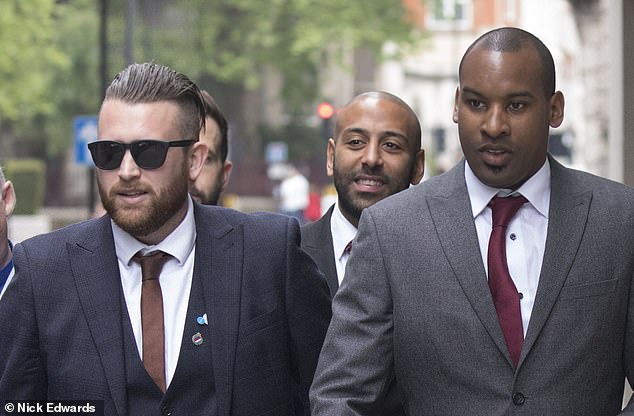 Instead of fleeing from the attack at about 10pm, he ran towards the attackers to protect others as they lashed out with 12in kitchen knives.

He received stab wounds to his head, leg, back and stomach, and had to undergo a three-hour operation to remove his spleen.

PC Marques was armed only with a baton when he confronted the attackers, who stabbed him repeatedly near London Bridge.

The British Transport Police officer was temporarily blinded when he was wounded above his right eye and also suffered significant injuries to his head.

Despite his wounds, he continued to fight – even with a knife sticking out of his leg. The officer later said he was ‘overwhelmed’ by messages of support.

He told how well-wishers he had never met had sent ‘genuine, heartfelt, caring messages’ following news of his bravery becoming public.

Good Morning Britain viewers shocked as Rebecca Reid shushes Konstantin Kisin
'Spider-Man' screenwriter and Oscar winner Alvin Sargent, 92, dies of natural causes at Seattle home
Polyamorous parents who have been together decade invite dance teacher couple to live in their home
WH: Talks with China must 'show significant progress' in 90 days or trade truce will be called off
Dramatic moment police swoop on cocaine dealer on Dartford Crossing
Gold dust could replace pills for adult acne, dermatologists claim
Up to 200 revellers hug each other and inhale 'hippy crack' during 12-hour illegal rave
Penis injection made from LIP FILLERS could herald new treatment for premature ejaculation