Pope Francis offered the ‘blessings of peace’ but was greeted by an extravagant military ceremony as he began his historic visit to the United Arab Emirates today.

The 82-year-old pontiff was greeted by horse-mounted guards, an artillery salute and a military flyover trailing the yellow and white smoke of the Vatican flag as he arrived at the presidential palace in Abu Dhabi.

His 40-hour visit to the Emirates is the first papal trip to the Arabian peninsula, with 135,000 followers set to celebrate a papal Mass on Tuesday in a rare display of Christian worship in the Muslim-majority region.

In a message to the prince, written in the palace book of honour, Francis offered the people of the UAE his prayers and ‘the divine blessings of peace and fraternal solidarity.’ 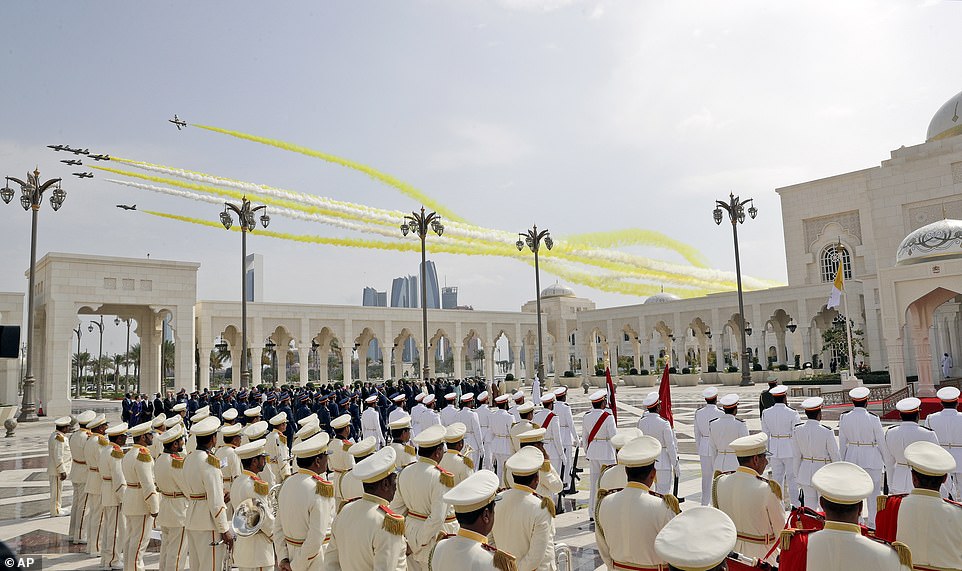 Military flyover: Emirati planes make a smoke trail of yellow and white, the colours of the Vatican flag, over the Abu Dhabi presidential palace in a ceremony to mark the Pope’s arrival today 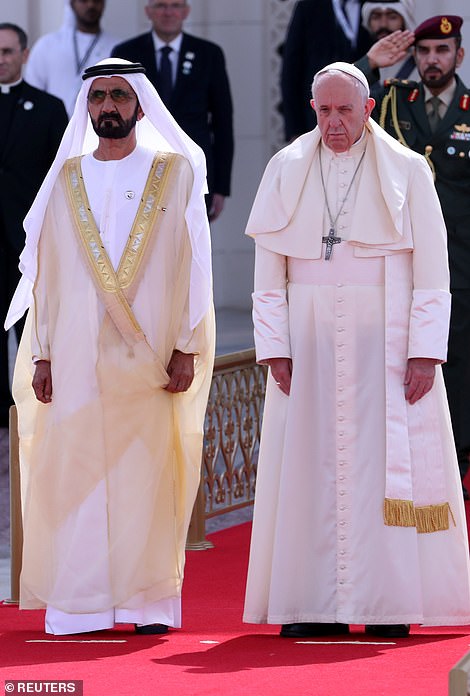 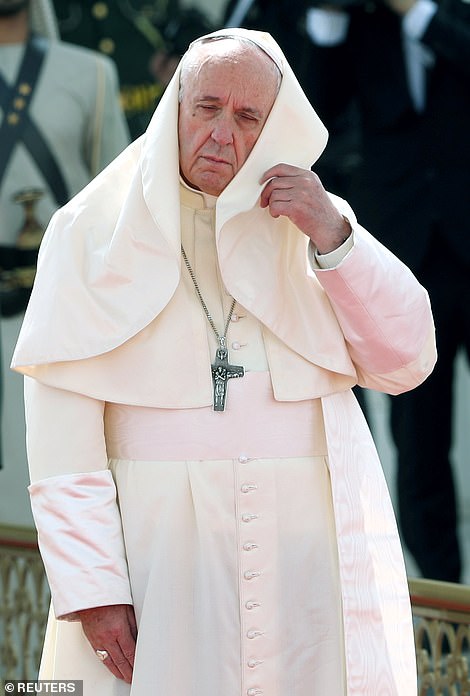 Historic visit: The Pope stands with Sheikh Mohammed bin Rashid al-Maktoum, the ruler of Dubai and prime minister of the UAE (left), and adjusts his cape (right) during the first papal visit to the Arabian peninsula 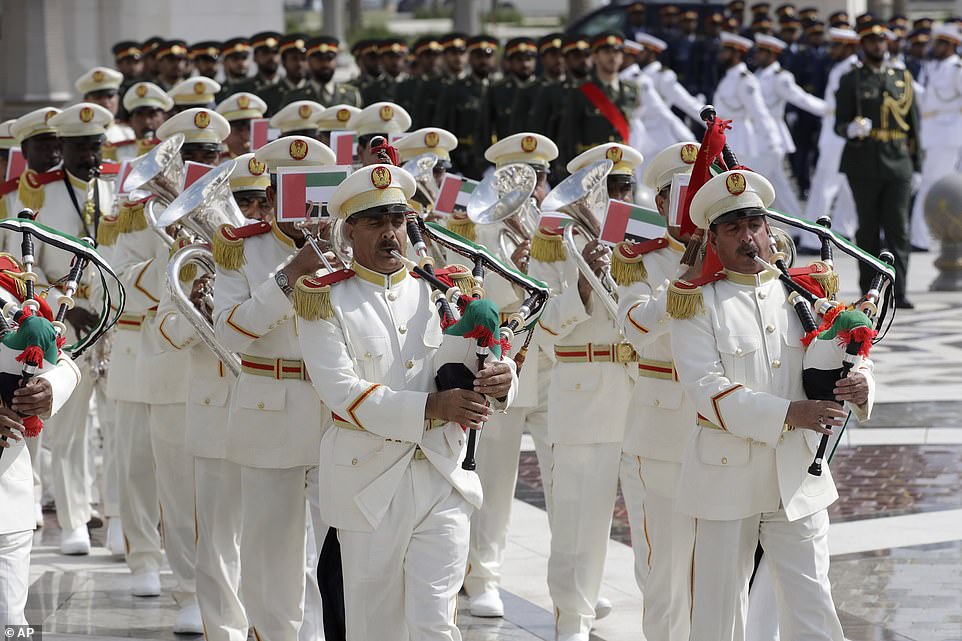 Marching band: Military musicians play during the welcoming ceremony for Pope Francis whose 40-hour visit will culminate in a historic papal mass on Tuesday

He also stood with the Emirati vice president and prime minister, Sheikh Mohammed bin Rashid Al Maktoum – the ruler of Dubai – as the Vatican and Emirati anthems played and delegations were introduced.

Abu Dhabi’s ruler said he was ‘delighted’ to speak to Pope Francis, tweeting pictures of the meeting on Monday in what he described as ‘our homeland of tolerance.’

Francis arrived in the Emirati capital late on Sunday, hours after urging a ceasefire in war-torn Yemen so that food and medicine can reach people in the depths of a humanitarian crisis.

The Emirates has been Saudi Arabia’s main ally in the war in Yemen, where a Saudi-led coalition is fighting the country’s Houthi rebels. 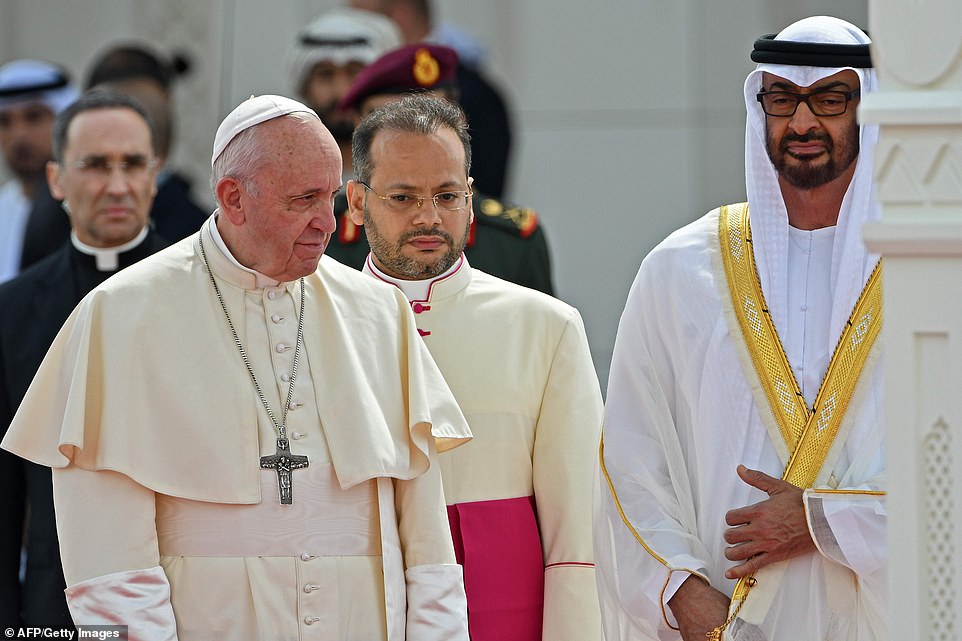 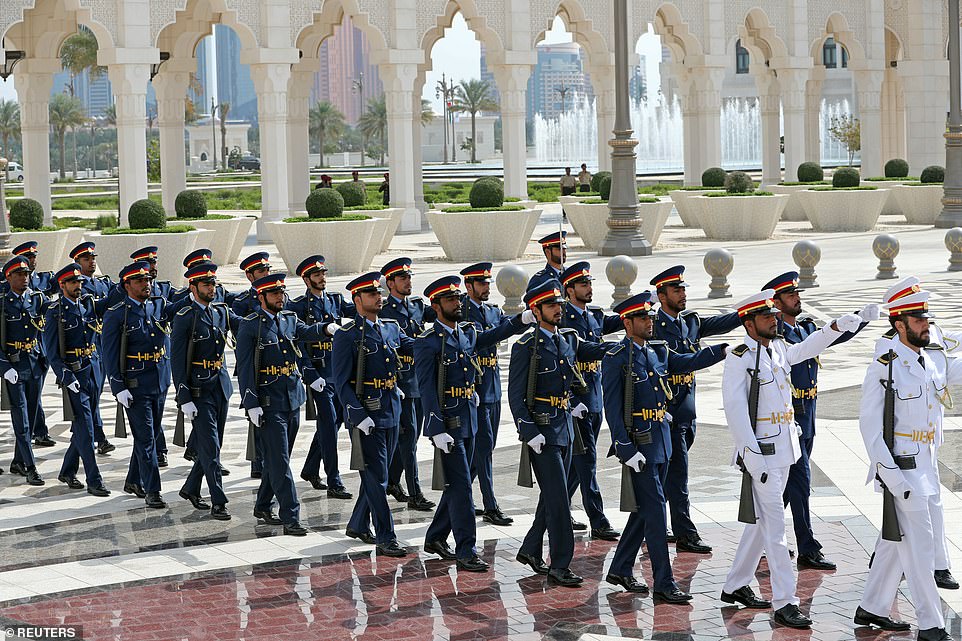 Pomp and ceremony: The UAE National Guard marches in uniform before the Pope’s arrival at the presidential palace today 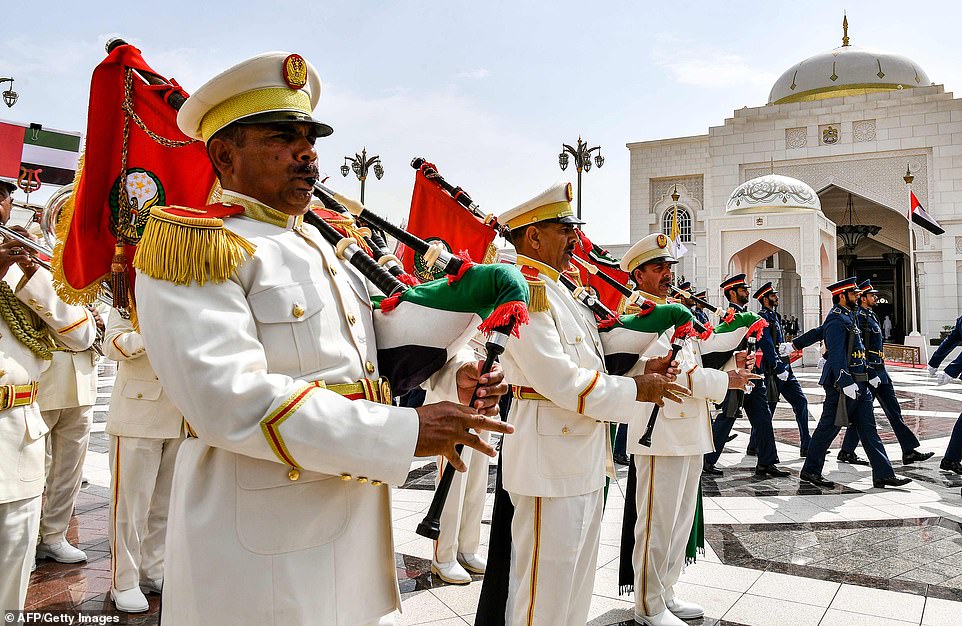 Military music: A band performs as an honour guard marches by during the welcoming ceremony for the 82-year-old pontiff

Francis urged the faithful in St. Peter’s Square to join him in prayer, saying ‘these are hungry children’ with no medicine, and ‘are in danger of dying.

His pre-trip appeal was a way for him to avoid embarrassing his hosts with a public denunciation of the humanitarian costs of the war while in the region.

In another sign of regional politics the papal plane flew north of Qatar, avoiding the nation’s airspace.

Four Arab nations – Bahrain, Egypt, Saudi Arabia and the United Arab Emirates – have been boycotting Qatar since June 2017 as part of a regional political dispute.

Tensions are still high between the nations, especially after Qatar’s win at the Emirates-hosted Asian Cup soccer tournament this past week.

By avoiding Qatari airspace, Francis omitted sending a telegram of greetings to the country’s ruler, Sheikh Tamim bin Hamad Al Thani, as he would do when flying through the airspace of countries. 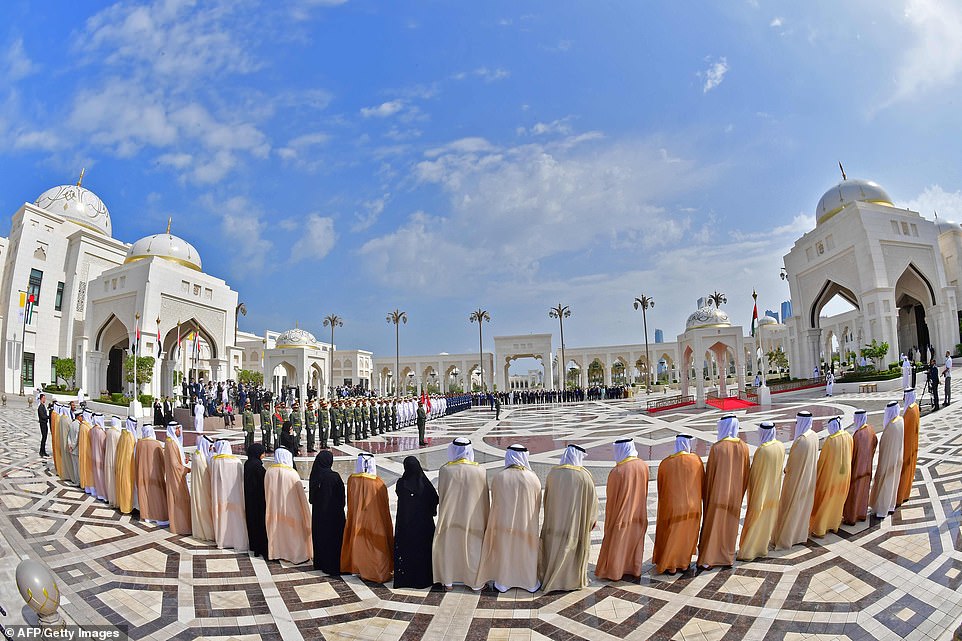 Blue skies: People line up in the presidential palace in Abu Dhabi during the reception for Pope Francis on Monday 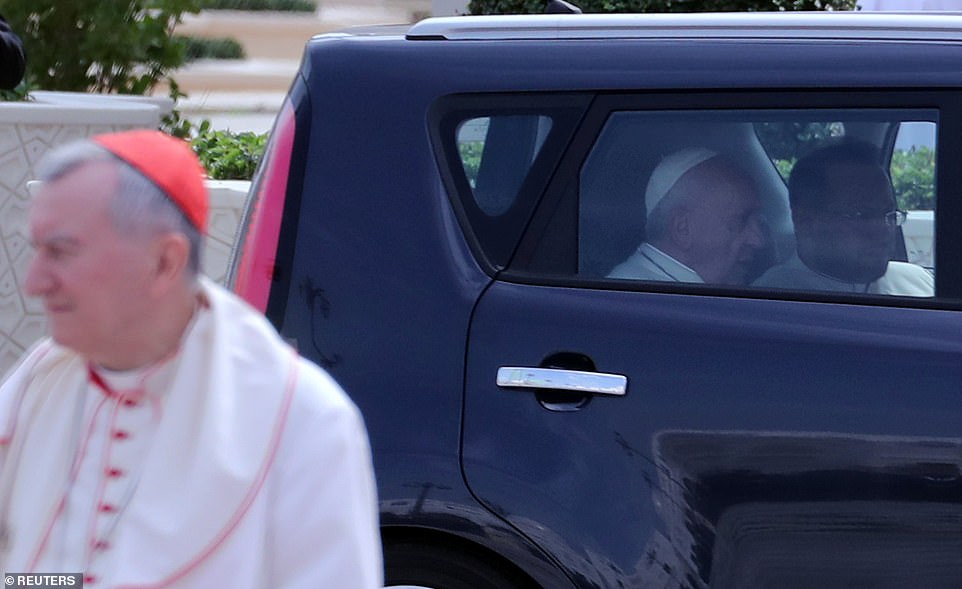 Back seat: Pope Francis is driven to the welcoming ceremony at Abu Dhabi’s presidential palace in the rear of a Kia hatchback 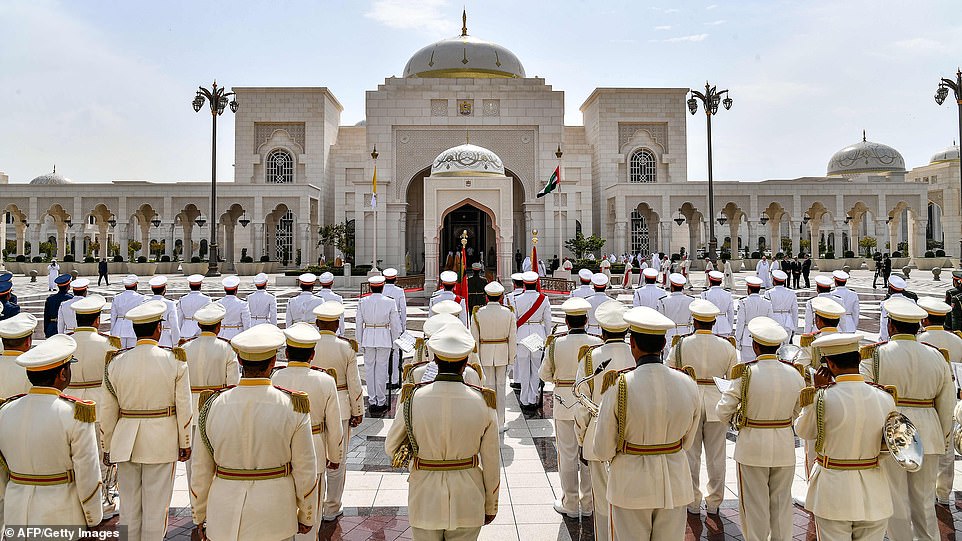 In formation: Members of a military band are seen standing during the welcome ceremony for the visiting Pope Francis 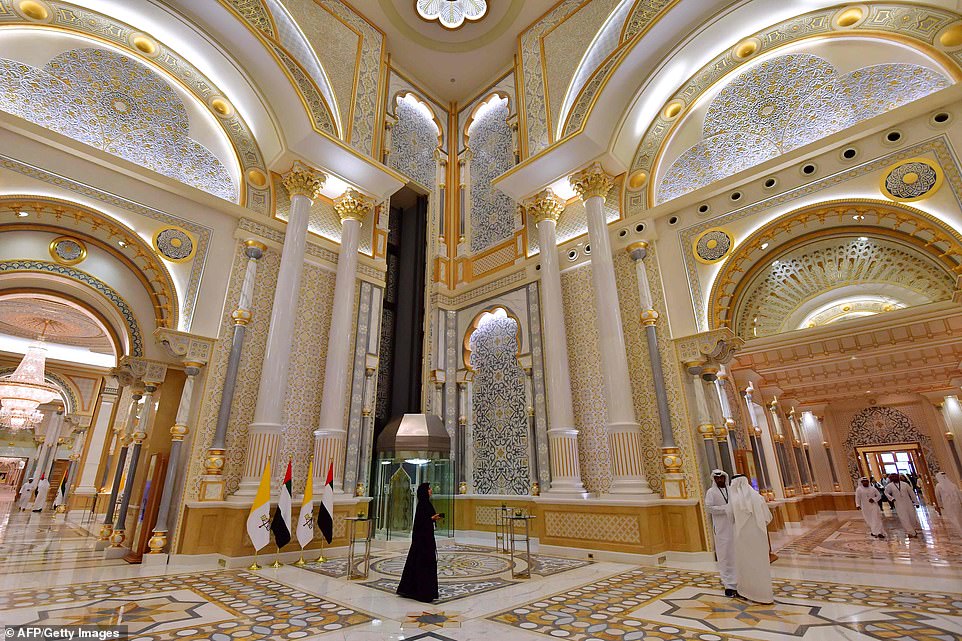 Extravagant: The interior of the presidential palace where Pope Francis visited on Monday morning during his historic trip 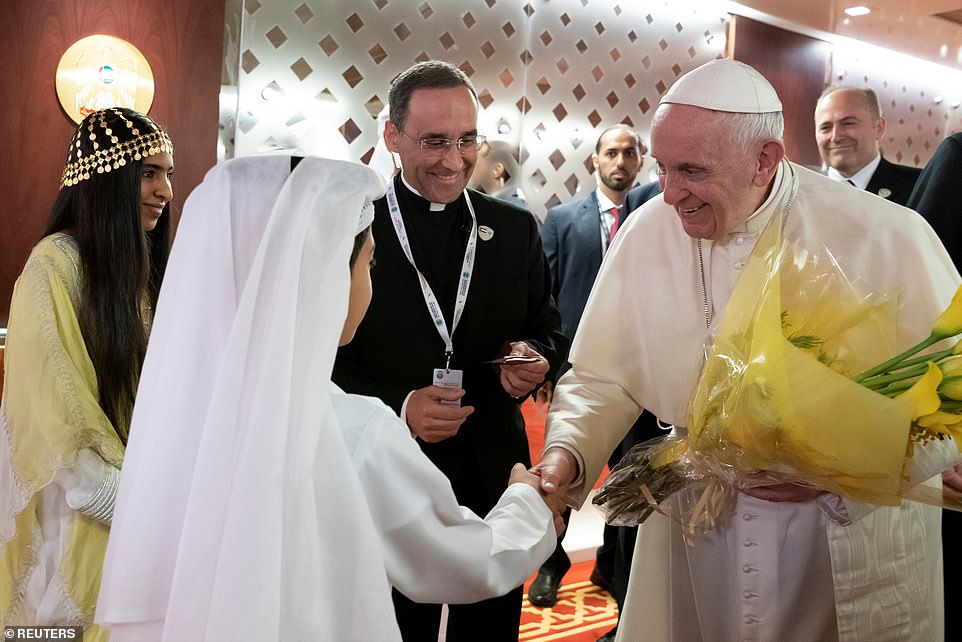 Arrival: Pope Francis greets an Emirati boy and receives flowers as he arrives at Abu Dhabi international airport on Sunday

Christian leaders attending a summit ahead of Pope Francis’ arrival in Abu Dhabi said they were excited for the first papal visit to the Arabian Peninsula.

Bishop Camillo Ballin, the apostolic vicar of Northern Arabia, said the Catholic Church was home to around a million people in the UAE, mostly foreigners.

He said: ‘His visit is a big and important encouragement for the Christians that live in these countries because they are far from their homeland and they need especially to be encouraged so that they feel they are home.’

Thompson said: ‘My congregation are so happy we are witnessing what will be the biggest Christian act of worship in the history of the Arabian Gulf, and we are excited to be a part of that.’