Saturday marks the 75th anniversary of the end of World War II but for many in Japan August 6 remains a more important date.

The US bomb, ‘Little Boy,’ the first nuclear weapon used in war, was dropped on the city.

The nuclear attack devastated the city for months after as survivors, known as hibakusha, suffered the effects of radiation and Japan went into a day of remembrance for those fallen last week.

And now specially colourised photos of that terrible day as well as of the weeks proceeding it have emerged to help those alive at the time to remember. 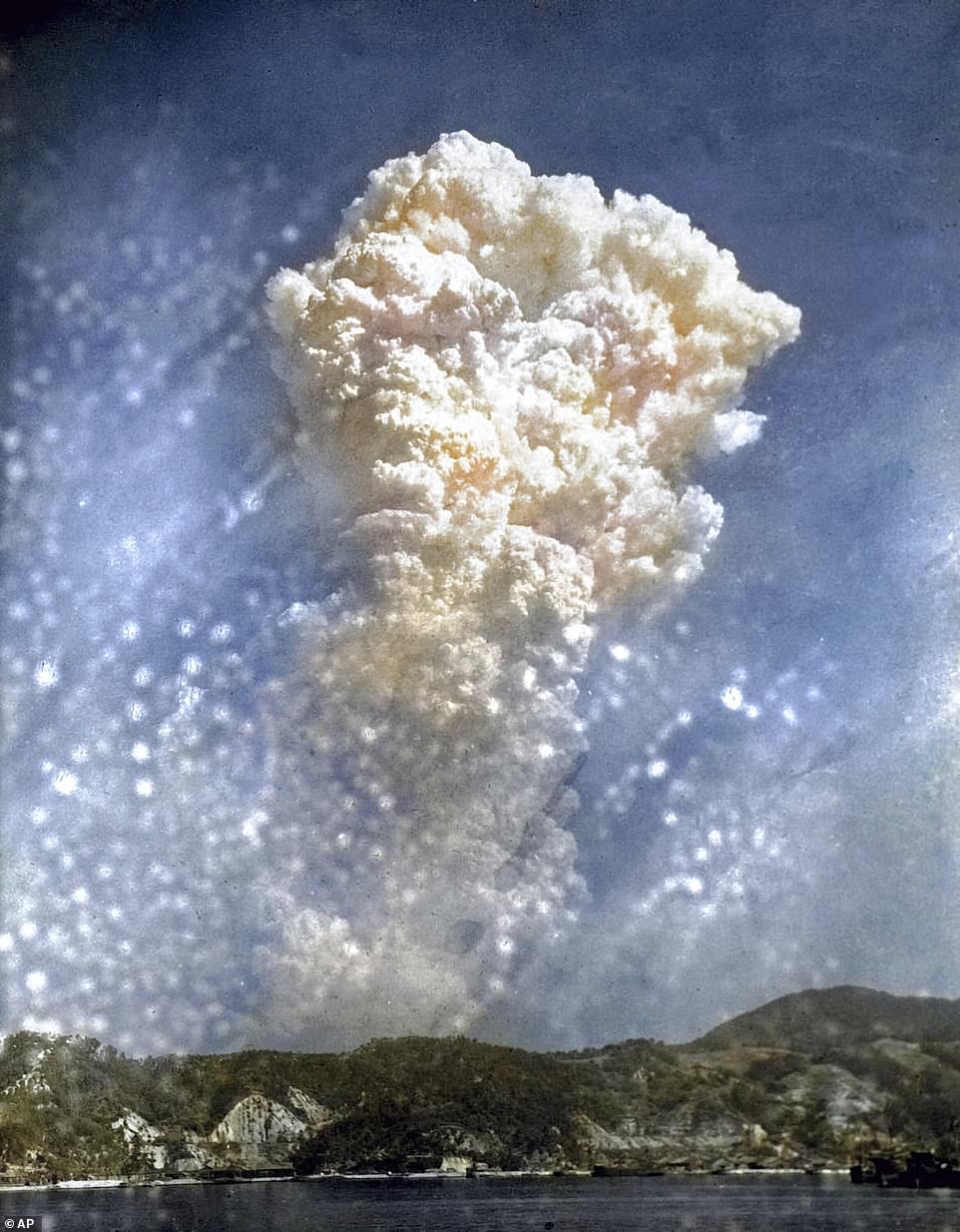 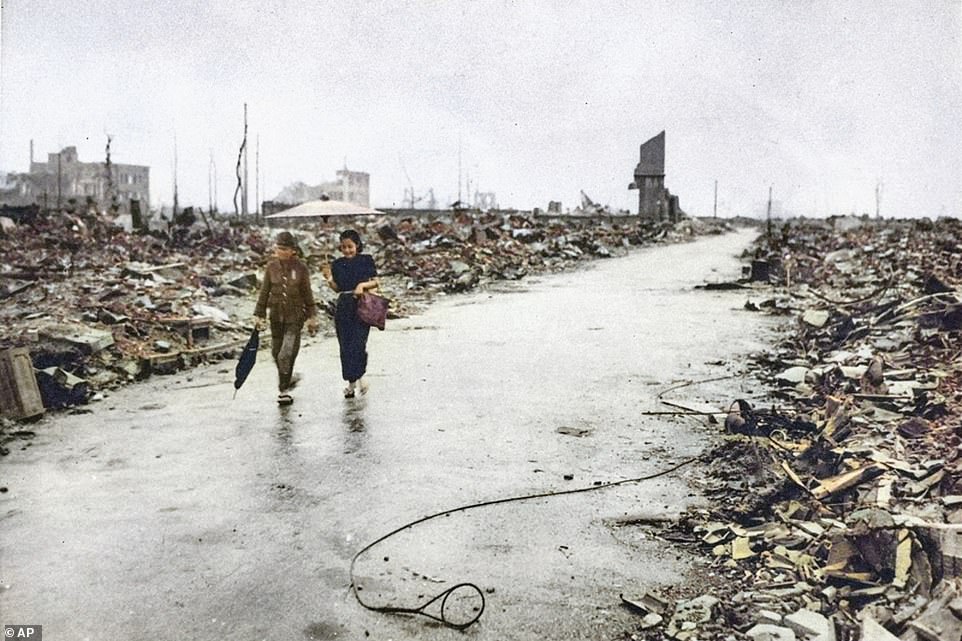 Two people walk on a cleared path through the destruction resulting from the August 6 detonation of the first atomic bomb in Hiroshima, on September 8, 1945 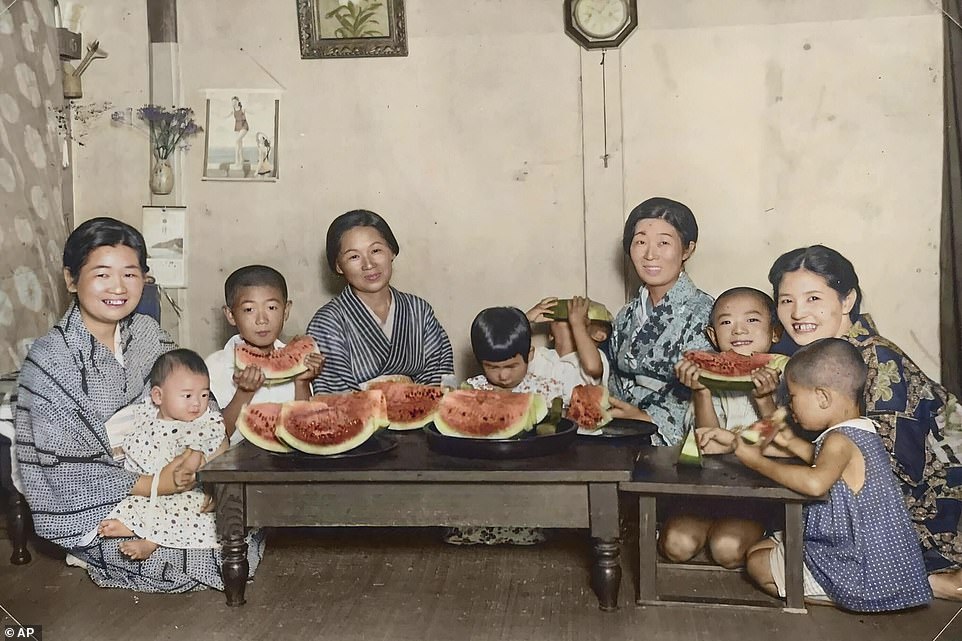 Hisashi Takahashi, covering his face with watermelon in the centre, supplied this photo of his family and relatives posing while they eat watermelon around 1932 in Hiroshima, western Japan 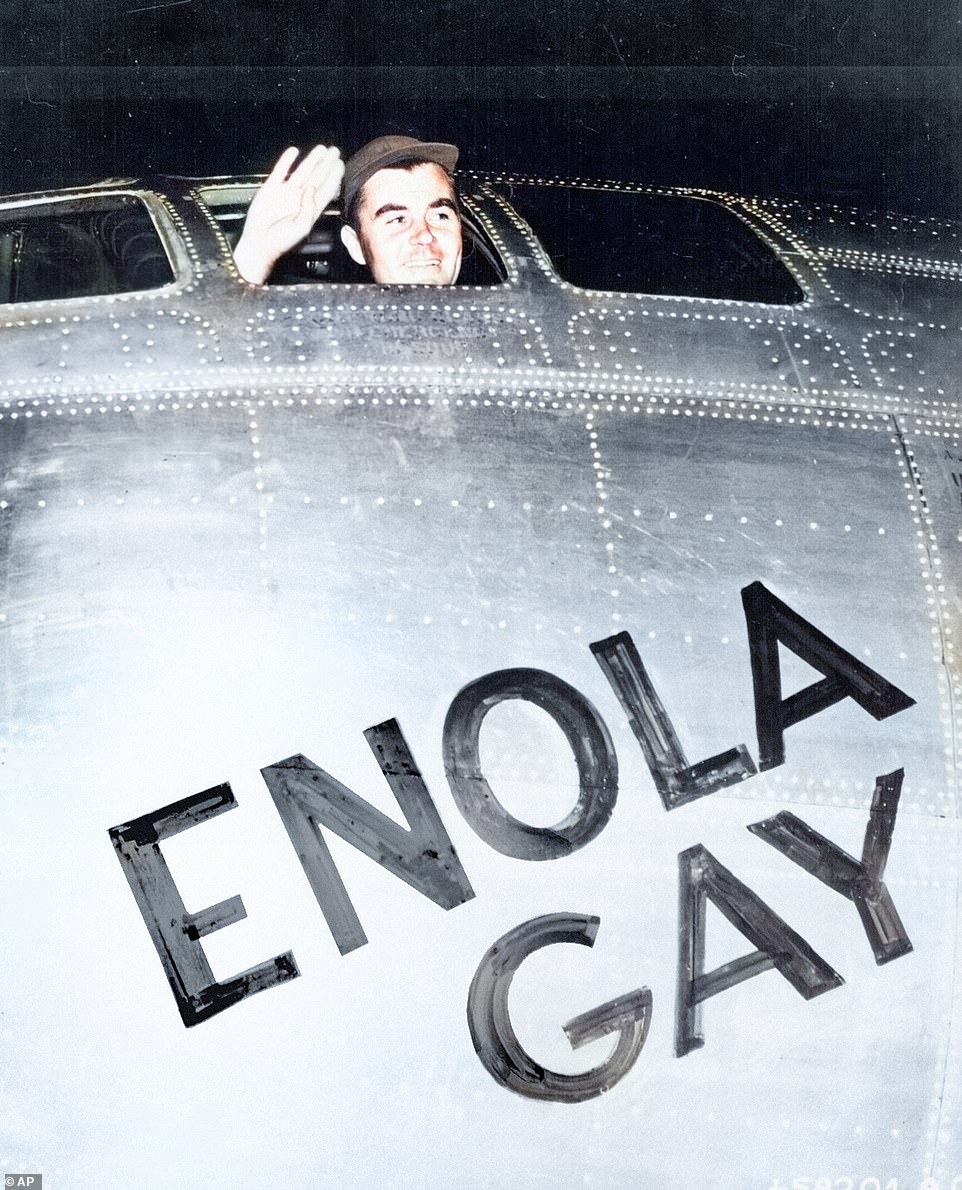 Colonel Paul W Tibbets Jr, pilot of the Enola Gay, the plane that dropped the atomic bomb on Hiroshima, Japan, waves from his cockpit before takeoff from Tinian Island in Northern Marianas, August 6, 1945

When Tokuso Hamai saw the colourised version of a picnic held under cherry tree blossoms sometime before World War II, forgotten memories of family members, most of whom died in the atomic bombing, came pouring out.

‘In colourised photos, people come to life,’ said Hamai, now 86. ‘I often played near [the picnic site], and sometimes I would do some naughty things and get scolded by my father.’

The power of a colourised photo to reignite lost memories was eye-opening for Anju Niwata, a student who gave Hamai the picture as a present three years ago.

Niwata, 18, said she hopes it will bring attention to her project with a Tokyo University professor to painstakingly colourise photos using artificial intelligence

Their research seeks to spark lost memories for the rapidly ageing generation who experienced the war. 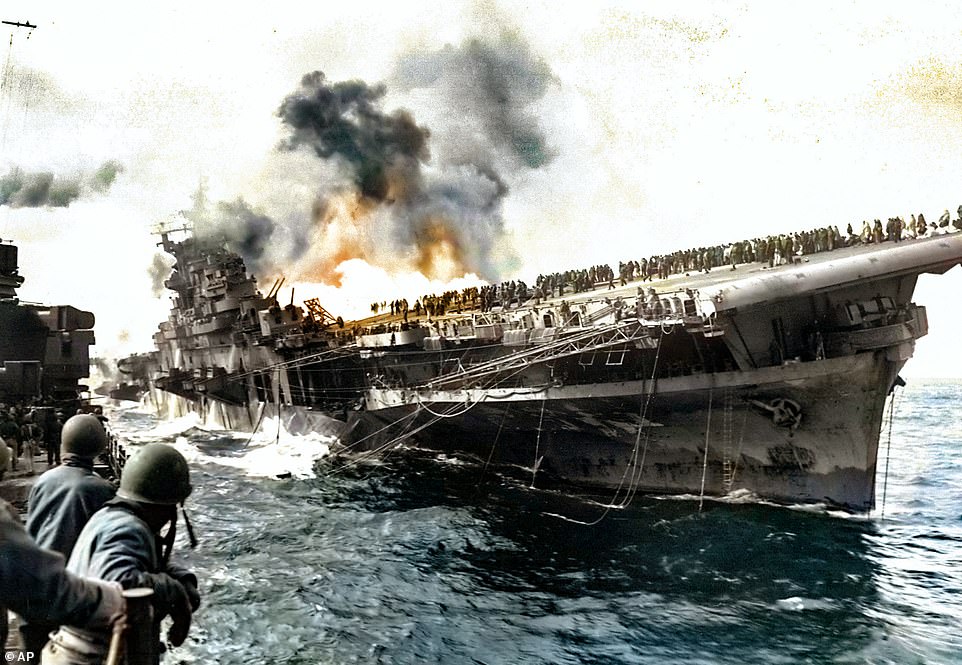 In this US Navy’s black and white photo digitally colourised and published by Anju Niwata and Hidenori Watanave, USS Franklin is provided assistance by the USS Santa Fe after the aircraft carrier had been hit and set afire by a single Japanese dive bomber, during the Okinawa invasion, on March 19, 1945 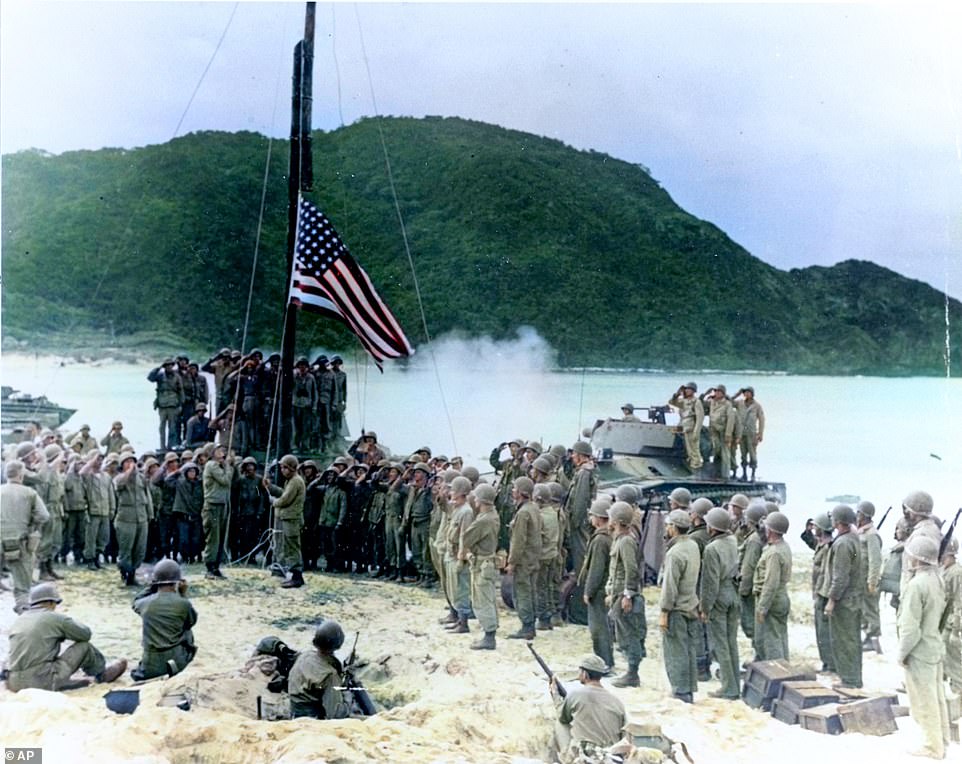 US Army and Coast Guardsmen stand at attention as the American flag is raised over Akashima, Japan on April 2, 1945, the little island, only a few miles from Okinawa 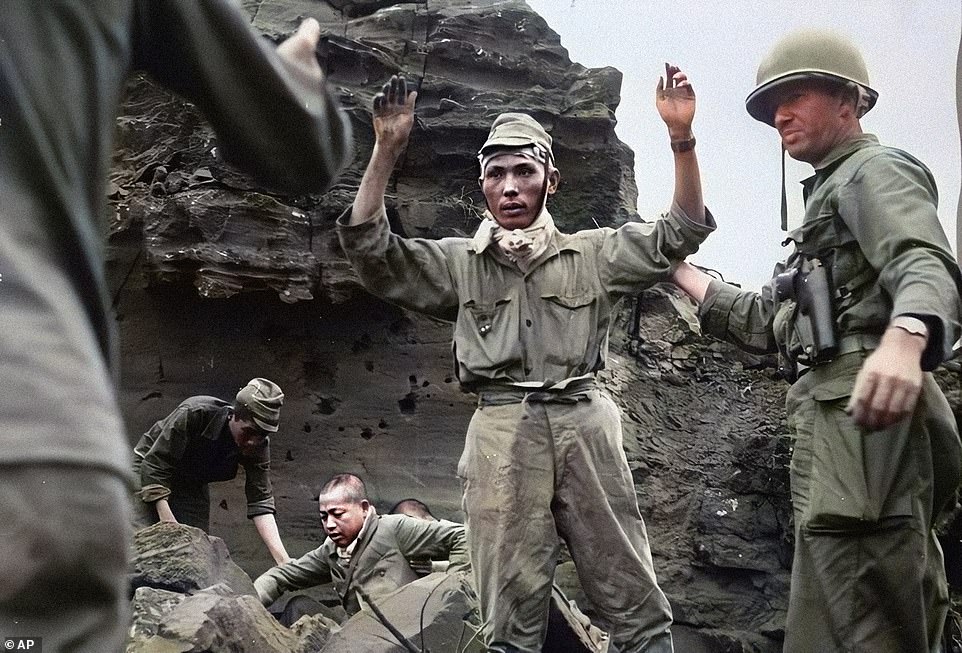 The first of 20 Japanese emerges from an Iwo Jima cave with his hands in the air on April 5, 1945. The group had been hiding for several days

‘Seeing Niwata share the colourised pictures with Hamai, and then watching him recall his old memories one after another, made it feel like the ice around his frozen memories was melting away,’ said Hidenori Watanave, the professor who taught Niwata how to colourise monochrome pictures using AI.

Niwata and Watanave call their photo colourisation project ‘Rebooting Memories,’ and they published a book last month of the colourised versions of about 350 monochrome pictures taken before, during and after the war.

Watanave and Niwata use three different types of AI photo colouring software. The AI is useful in identifying the accurate colours of natural things, such as the sea, the sky and human skin, but it cannot accurately colourise human-made objects like roofs and clothes, Watanave said.

So Niwata and Watanave painstakingly finish the AI-colourised photos by hand to get more accurate colours based on the photo owners’ memories and advice from experts. 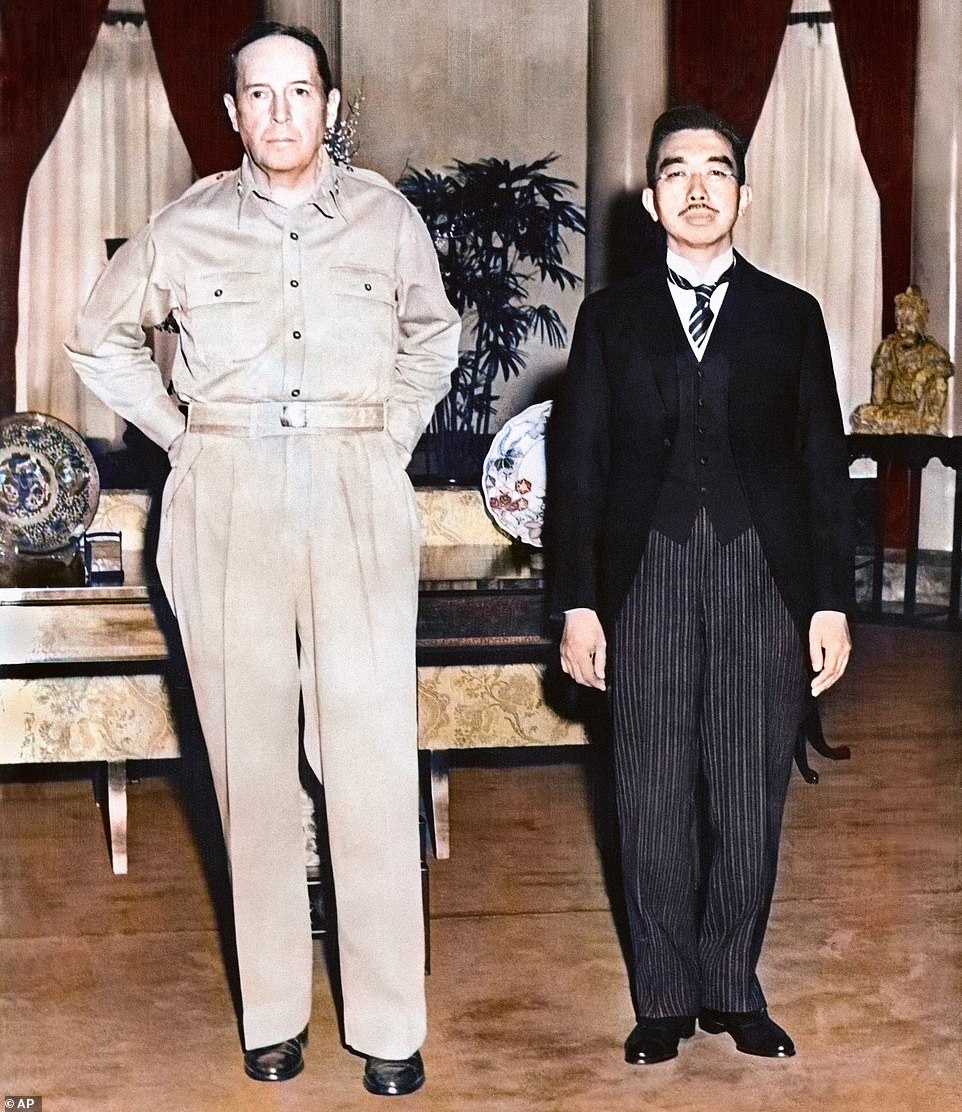 Japanese Emperor Hirohito (right), meets General Douglas MacArthur (left) at the US Embassy in Tokyo on September 27, 1945. General of the Army Douglas MacArthur was an American five-star general and Field Marshal of the Philippine Army. He was Chief of Staff of the United States Army during the 1930s and played a prominent role in the Pacific theater 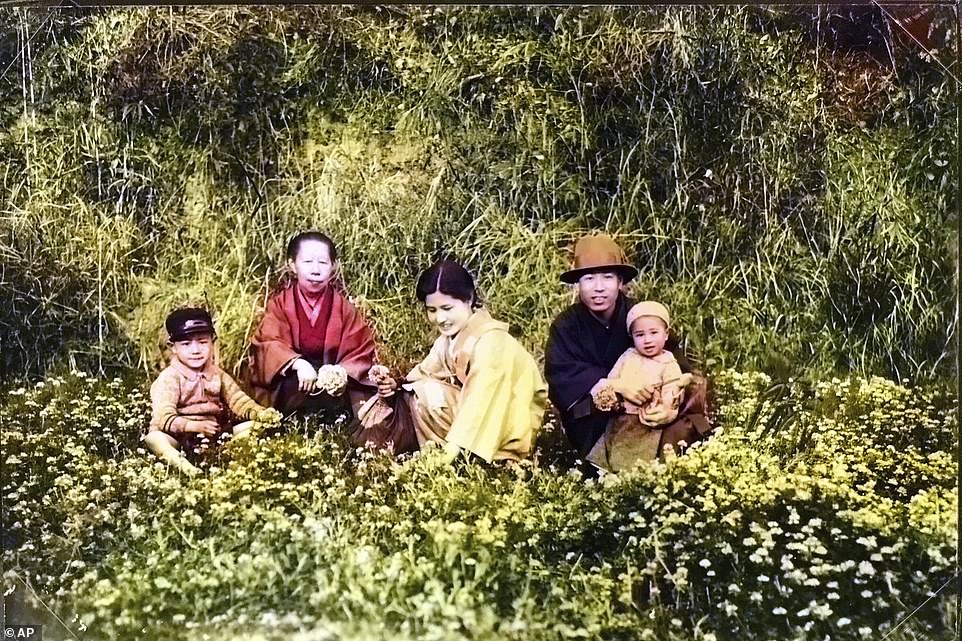 Hiroshima resident Hisashi Takahashi and his parents, grandmother and younger brother pose for a photograph in a flower bed of dandelions in 1935

They also look through historical documents and archives that show what the colours should look like. Some photos take a few months to finish.

For Watanave, Twitter has become a powerful platform to pursue the colourisation project.

When he posted a picture of the Hiroshima atomic bomb mushroom cloud that the Al software had colorized as white, a film director suggested that it should be more orange.

Watanave checked the testimonies of those who saw the mushroom cloud and also researched the components of the atomic bomb to see if it could actually make an orangish colour.

After he confirmed that it could, Watanave added orange to the picture.

While the accuracy of the colour is important, Niwata and Watanave said the most vital thing is that the colourised photos match the memories of the photo owners. 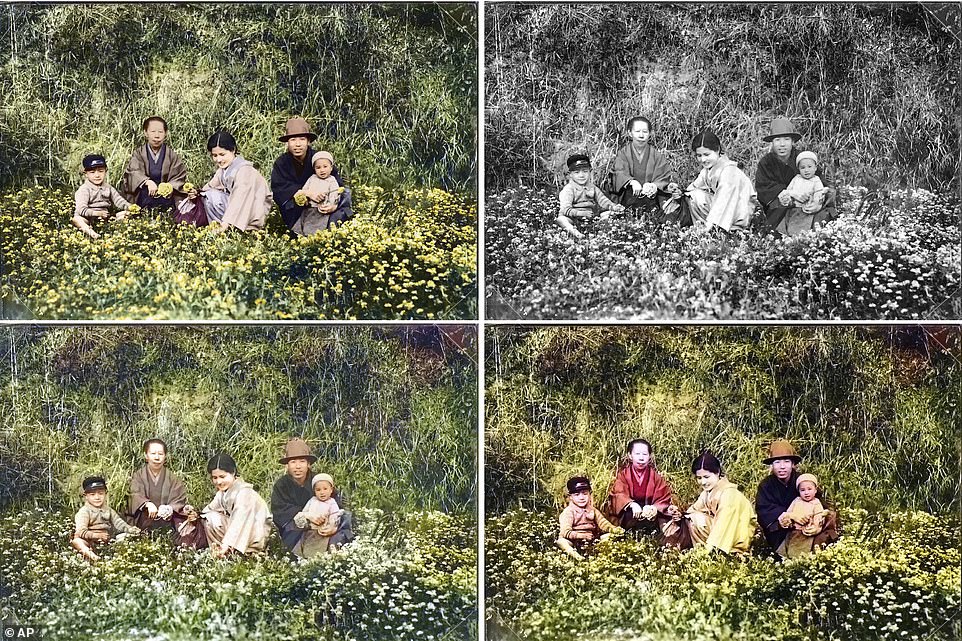 Time, however, is running out; the average age of the atomic bomb survivors is about 83.

There are often moments of wonder when the elderly see the revitalised photos.

When Niwata showed the colourised version of a family photograph to a war survivor who had dementia, for example, he remembered the type of flowers in the photograph; just a few weeks later, he was unable to speak.

Niwata said that publishing the colourisation book during the coronavirus outbreak has made her think about the pandemic’s link to the war.

‘Our everyday lives have been stolen away by the coronavirus in a flash, which I think resembles what happened in the war. That’s why I feel like now is an opportunity for people to imagine (wartime life) as their own experience,’ she said.

Watanave hopes that using new technology will help younger Japanese feel more of an attachment to those who lived through the war.

‘People are forgetting wartime memories. We need to revitalize those old memories by using the latest method of expression and delivering it to the hearts of many people,’ he said.

‘By the time we mark the 80th or 85th anniversary, we need to come up with a new way of expressing (wartime memories).’