A powerful 6.8-magnitude earthquake has rocked the Philippines.

The quake hit near the town of Kisante and less than 100km from Davao City just after 9am local time (1am GMT). It was about 50km  deep.

A tsunami warning has not been issued. 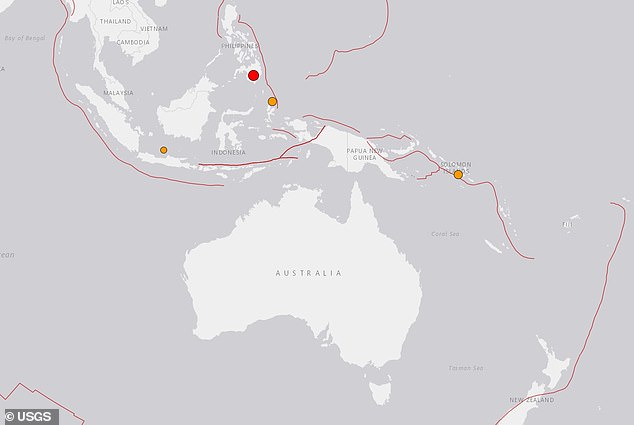 Terrified locals fled into the streets after the shallow quake, which the US Geological Survey said hit the island of Mindanao as schools and offices opened for the day.

‘Our municipal hall has been destroyed,’ said Reuel Limbungan, mayor of Tulunan, a town near the epicentre.

‘We are receiving lots of reports of injuries, but we have to confirm them,’ he told AFP.

The area is still suffering the effects of a 6.4-magnitude quake that hit less than two weeks ago, killing at least five and damaging dozens of buildings.

Residents evacuated homes across the Mindanao region including a mall that caught fire in the city of General Santos shortly after the quake struck on October 16.

The Philippines is part of the Pacific ‘Ring of Fire’, an arc of intense seismic activity that stretches from Japan through Southeast Asia and across the Pacific basin.