The husband of a heavily-pregnant teacher who died with her unborn baby when a Porsche ploughed into her car at 120mph has said his family’s lives are ’empty without her’.

Anna Kirsopp-Lewis, 34, died after Ian Barton, 62, crashed into her Peugeot 2008 with his Porsche Cayenne 4×4 in Warminster, Wiltshire on December 18 last year.

The pub landlord’s vehicle hurtled into hers at such speed that she was thrown from the car and was pronounced dead at the scene. He died five days later from his injuries. 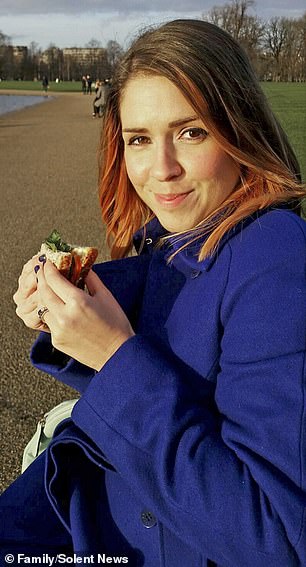 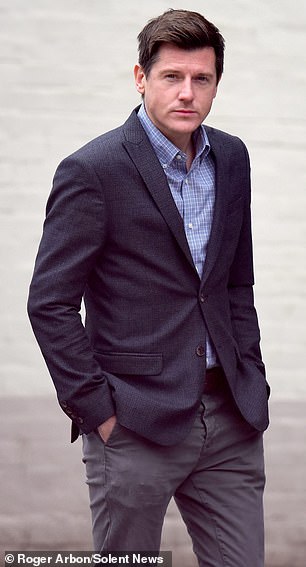 Anna Kirsopp-Lewis, 34 (pictured right), died after Ian Barton, 62, crashed into her Peugeot 2008 with his Porsche Cayenne 4×4 in Warminster, Wiltshire on December 18 last year. Her husband Chris Lewis (left) told her inquest he has been left devastated

Miss Kirsopp-Lewis was on her way to a midwife appointment and was just two weeks away from the date she was due to give birth to her son Oscar when she died.

Tragically, Miss Kirsopp-Lewis’ death came on her own mother’s birthday.

Her husband Chris Lewis told an inquest into her death: ‘She was my wife, my best friend and my future. She was kind, compassionate and clever, the reason I was happy.’ 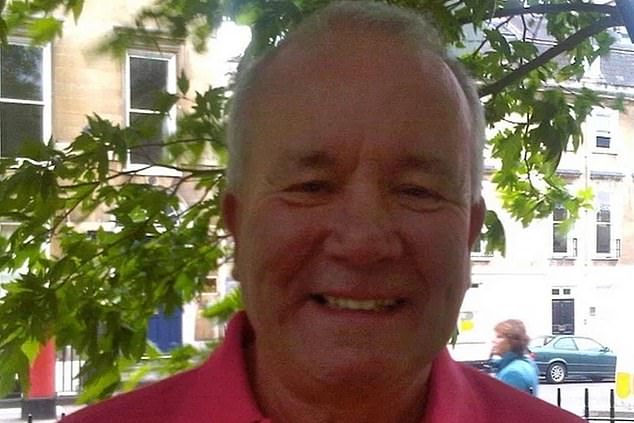 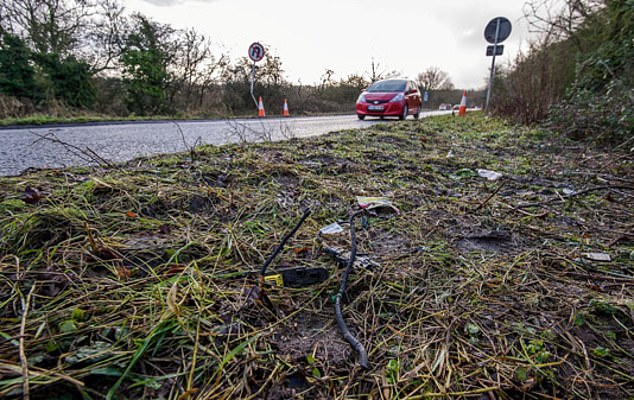 Debris is pictured at the side of the A36 in Warminster, Wiltshire, after the crash

The hearing was told Mr Barton’s four-wheel drive reached speeds of 148mph before he crashed.

Shocking dashcam footage revealed Mr Barton’s black Cayenne GTS had been racing along ‘like a rocket’ on the wrong side of the 60mph A36 just moments before the fatal crash.

The coroner was told horrified witnesses cried ‘she’s dead, she’s dead’, having rushed to help Miss Kirsopp-Lewis and Mr Barton after the crash, which happened at around 1pm after she had spent the morning with her husband and son.

Medics desperately tried to save Miss Kirsopp-Lewis, who taught at Frome College, Somerset, but she was pronounced dead at the scene.

Mr Barton, 62, was rushed to Southmead Hospital in Bristol, but he died five days later on December 23.

Devastated Mr Lewis, who teaches at Bishopstrow College near Warminster, choked back tears as he paid tribute to his wife at the start of today’s inquest at Salisbury Coroner’s Court. 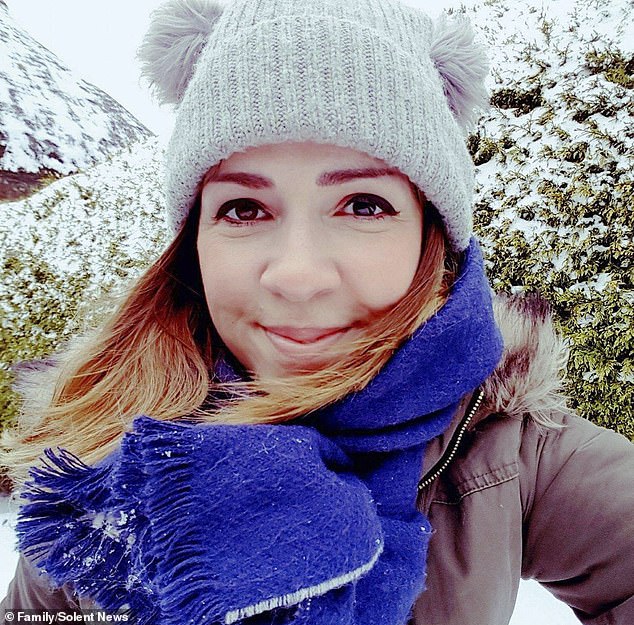 Miss Kirsopp-Lewis (pictured) was on her way to a midwife appointment and was just two weeks away from the date she was due to give birth to her son when she died.

In an emotional statement, he said: ‘How do I describe Anna? Anna made you feel joy. Time spent in her company was always full of laughter. She injected fun into everything she did, bringing good humour and wit to all situations.

‘She loved to tell corny jokes and her life was full of adventure. She was a high achiever, she was quiet and kind, but with unlimited wells of inner strength.

‘She was an inspiring teacher, a devoted mother and a loving wife, daughter and friend.

‘Anna knew the power of kindness. She made a difference to the lives of those she taught.

‘She was kind, compassionate and clever, the reason I was happy. We had stability and could achieve anything together.

‘Anna inspired me, as she did others. She made me a better person.

‘She was a mother. She always wanted to have a family and planned for our son Henry as soon as we were married. She loved being a mother, it came easy to her.

‘He was the centre of her life, their relationship was joyous. She always focused on filling his life with laughter and love. He was everything to her, as she was to him. 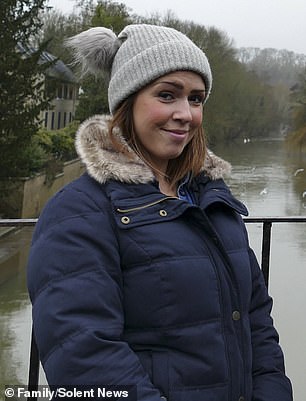 ‘She didn’t want Henry to be an only child and so we planned for a second child and Oscar was that baby. He was much anticipated. She was so very excited about his imminent birth.

‘Our lives are empty without her. Henry will live life without his mother and brother.

‘She had so many hopes for the future. Her contribution to society is a significant loss.’

The court heard statements from a number of witnesses who were overtaken by Mr Barton on the A36, with footage showing the £72,000 Porsche speed between two lorries just seconds before the crash.

Van driver Paul Cloak, the last to be overtaken by Mr Barton before the crash, said: ‘It just baffled me how anyone could be driving like that, there’s no excuse for it.’

Crash expert Dean Beaumont, who reviewed footage from a number of dashcams, said he calculated Mr Barton was travelling at between 120mph and 148mph before the crash. 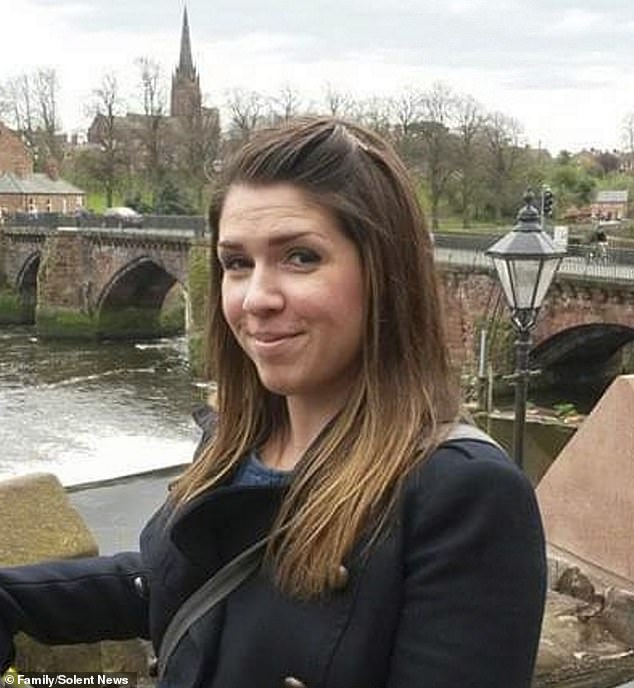 Representing Miss Kirsopp-Lewis’ family, lawyer Adrian Bucket told the hearing: ‘Had he been alive, it is my submission that Mr Barton would have been prosecuted for gross negligence manslaughter. It is incredible that only two vehicles were involved. What we have here is negligence of the grossest kind. It is unlawful killing.’

The inquest also heard a statement from Mr Barton’s wife Adele, with whom he ran highly-regarded Cotswolds gastropub The Wheatsheaf in Combe Hay, near Bath, which was named by The Times as ‘one of the most desirable villages in England’.

Mrs Barton said: ‘Ian would never wish anyone harm, which is what makes these circumstances all the more tragic. He was a good, kind man.

‘He did drive fast, but not erratically and never took risks.’

He added no faults had been found with Mr Barton’s vehicle which could have caused the incident.

Coroner Ridley said Barton essentially ordered other road users to ‘get out my way’ as he raced along the wrong side of the road, losing control and killing himself and Miss Kirsopp-Lewis.

He recorded a conclusion of death by road traffic collision for Mr Barton and unlawful killing for Miss Kirsopp-Lewis.

He said: ‘Anna’s vehicle was hit from the rear by [Mr Barton’s] Porsche Cayenne.

‘It was not being driven in a manner having regard to the speed restrictions or the weather conditions – that it was wet and windy – at the time.

‘Her seatbelt was ripped into pieces and she was ejected from the vehicle, coming to rest in the road. She died at the scene. 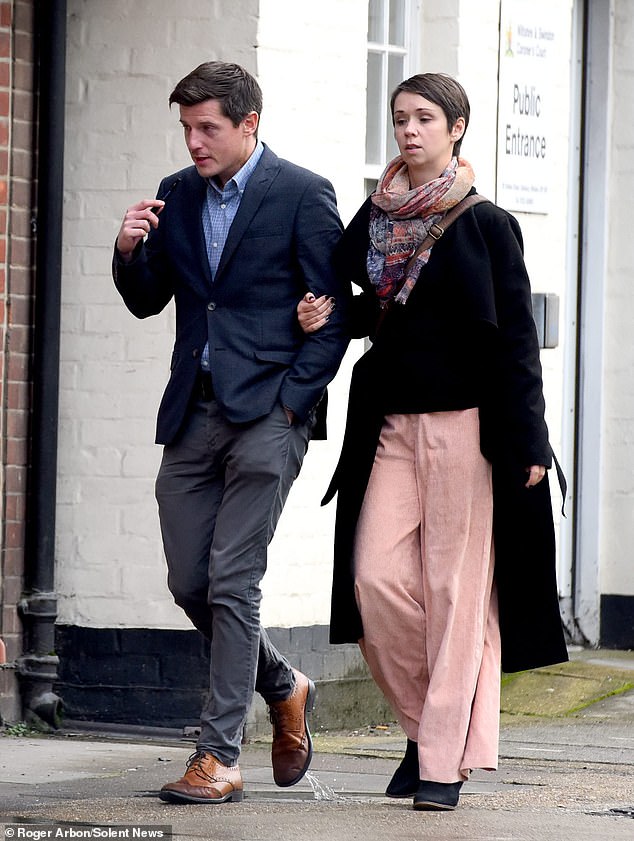 ‘She was heavily pregnant and her unborn son also died as a result. The Porsche was not being driven adhering to the road markings in the lead up to the crash.

‘I conclude Mr Barton’s death was the result of a road traffic collision.

‘For Anna, unlawful killing in the context of road traffic incidents is very rare, it must satisfy the criteria for gross negligence manslaughter.

‘I am sure that Mr Barton owed a duty of care to Anna and other road users.

‘The manner in which he was driving can only be described as aggressive, audacious and abhorrent. There’s no excuse, cars were effectively being told ‘get out of the way’.

‘I am sure it can be categorised as truly, exceptionally bad and I return a conclusion of unlawful killing.’

A lawyer speaking on behalf of the family today described Anna’s death as ‘a loss from which they will never recover’ and implored for the law to be changed to properly recognise the loss of their unborn son Oscar.

She also said Mr Barton had acted with ‘complete disregard for the lives of everyone else on the road’.

Claire Roantree, a partner at law firm Boyes Turner, said: ‘Anna and Oscar were irreplaceable to their family, whose lives have been torn about by this tragic and avoidable event.

‘They lost a loving and much-loved mother, wife, sister and daughter in Anna. 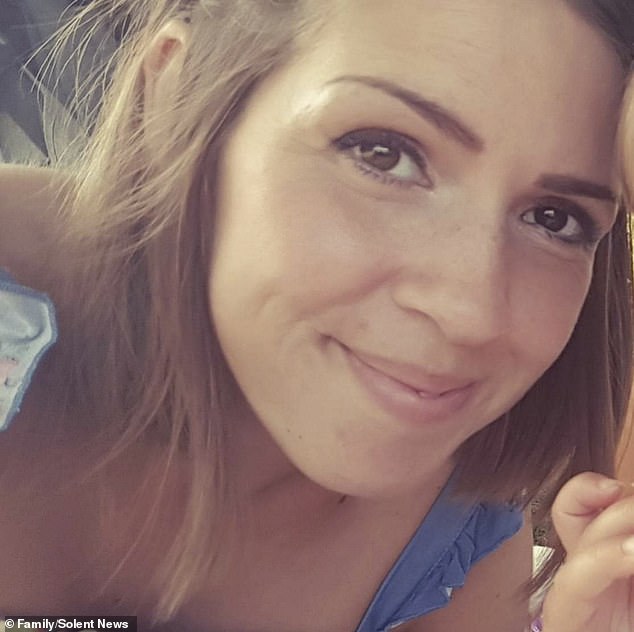 Pictured: Anna Kirsopp-Lewis, whose family was disappointed an inquest wasn’t held for her unborn baby, Oscar, who was due to be born in the days following her death

‘In Oscar, they lost a son, brother, nephew and grandson who would have been loved and adored.

‘The family are relieved a verdict of unlawful killing has been recorded. They do not and will never think that Anna’s and Oscar’s deaths were an accident.

‘Ian Barton made a deliberate decision to drive at shockingly high speeds in appalling weather conditions and into the path of oncoming vehicles.

‘He put everyone’s life at risk, without thought of the consequences. The family share the coroner’s view that his driving was ‘aggressive, audacious and abhorrent’.

‘Anna’s only mistake was to be on the wrong stretch of road at the wrong time, with tragic consequences which her family will have to live with for the rest of their lives.

‘You cannot put into words just how shocking the footage of Mr Barton’s driving was.

‘People can make mistakes and errors of judgement, but there is a gulf between that and the conscious and deliberate decision Mr Barton took that day in driving with complete disregard for the lives of everyone else on the road.’

The lawyer said the family are ‘very disappointed’ that Miss Kirsopp-Lewis’s baby, Oscar, was not granted his own inquest.

They added that the family want the law changed so that full-term babies are given inquest even if they were never born.

Ms Roantree said: ‘The family are very disappointed this inquest was not about Oscar’s death as well as Anna’s. In their view, Oscar was due to be born within days and was a full-term baby. Because he was not born, there is no record of him anywhere.

‘Anna and Oscar’s family believe that is wrong and the law needs to be changed to enable other full-term babies like Oscar – who are ready to be born – to be recognised as the people they would have been and for it to be understood how they died.

‘They feel that Oscar, and other babies like him and their families, deserve no less and that they do not deserve to be invisible and lost in the system.

‘In the family’s view, the category of bereaved people is too small and should be widened to reflect family life. A family can love an unborn child – but the law does not recognise this. They think that should change.

‘Anna’s family will continue to try TO rebuild their lives following a loss from which they will never fully recover.’

At Miss Kirsopp-Lewis’s funeral in January she was buried in an eco-friendly cardboard coffin decorated by Henry, who is now aged three and a half, and his cousins.

After leaving school, she did a BA in English and Cultural Studies at Bath Spa University and then trained to be a teacher at the University of Exeter, where she met her future husband.

The couple then moved to Manchester where she got a job at Wright Robinson School, working there for five years before the pair went to Vietnam for 12 months. The mother-of-one taught GCSE English and Media at the Singapore International School.

After returning she began work at Frome College.