Prince Harry appeared in excellent spirits as he arrived in Oxford for a busy day of royal engagements.

The Duke of Sussex, 34, he kicked off the morning with a visit to the Oxford Children’s Hospital, where he will spend time with some of the young patients.

The prince, who welcomed son Archie with the Duchess of Sussex last week, smiled as he was presented with a teddy bear for his newborn. 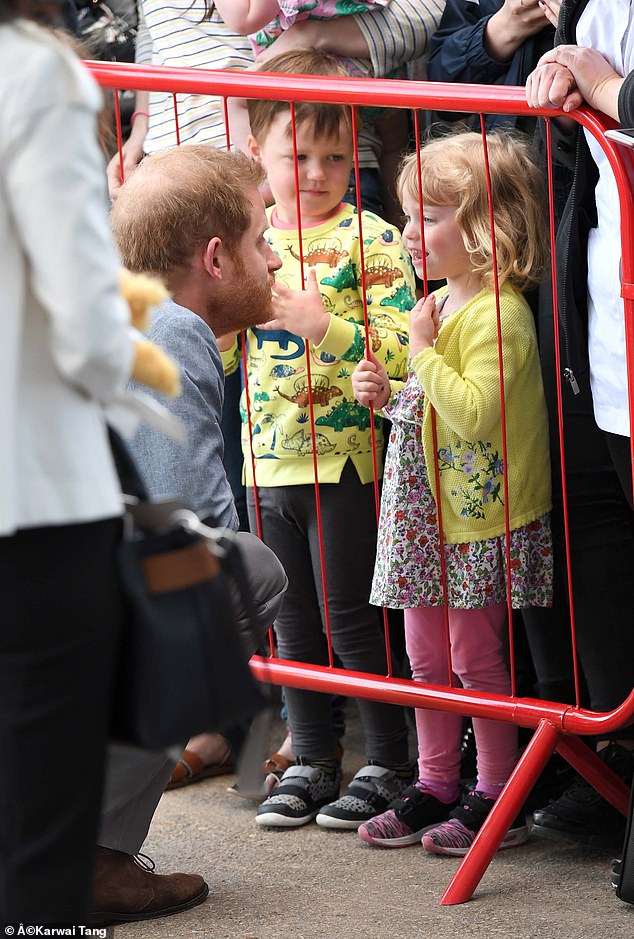 Already a natural! Showing his paternal instincts, new father Prince Harry crouched down to speak to two children waiting to speak to him at Oxford Children’s Hospital this morning 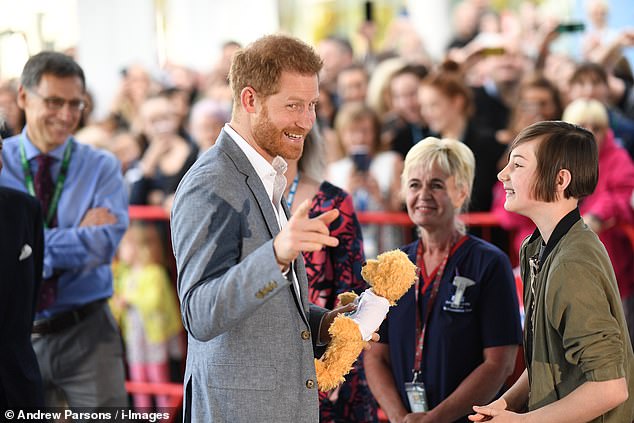 Harry will tour the Oxford Children’s Hospital, a purpose-built centre for the treatment of children and young adults, based at the John Radcliffe hospital site.

During the visit, the duke will meet children and young people receiving treatment, and the staff caring for them, as well as supporters of Oxford Hospitals Charity.

He will visit teenagers on a ward specifically tailored to the needs of young adults and meet 13-year-old Mikayla, a WellChild award winner, who previously met the duke at the WellChild Awards in 2016.

Before leaving Harry will visit the hospital’s school to meet students, taking lessons while undergoing treatment, and their teachers. 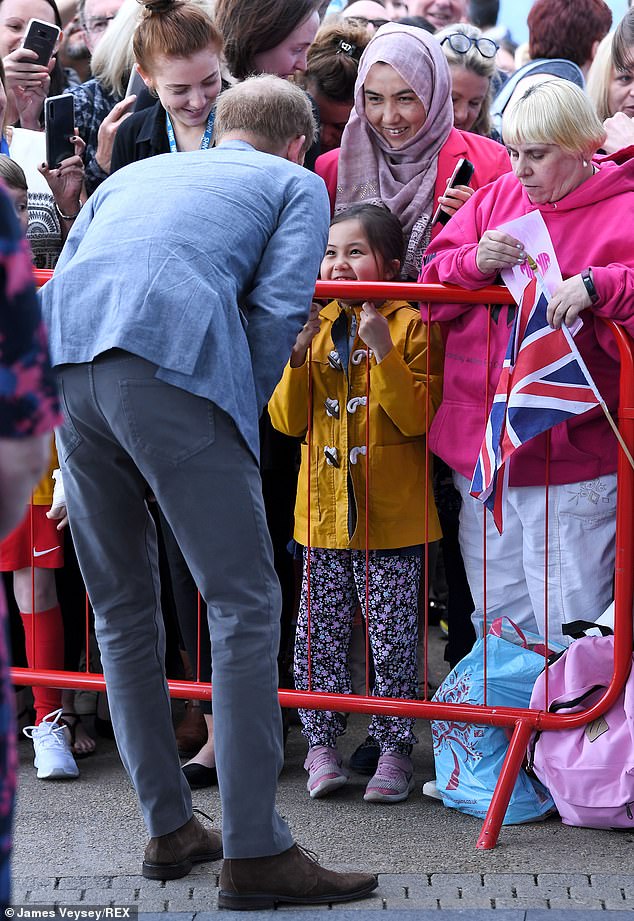 Made her day: One little girl beamed as the prince took the time to speak to her at the hospital 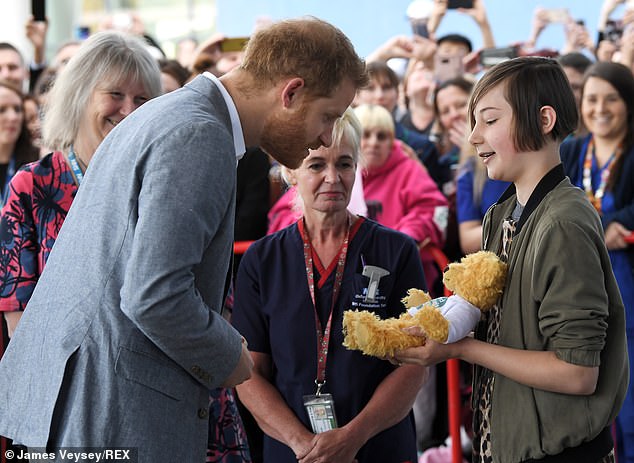 Special gift: Daisy Wingrove presents Prince Harry with a teddy for baby Archie at the hospital 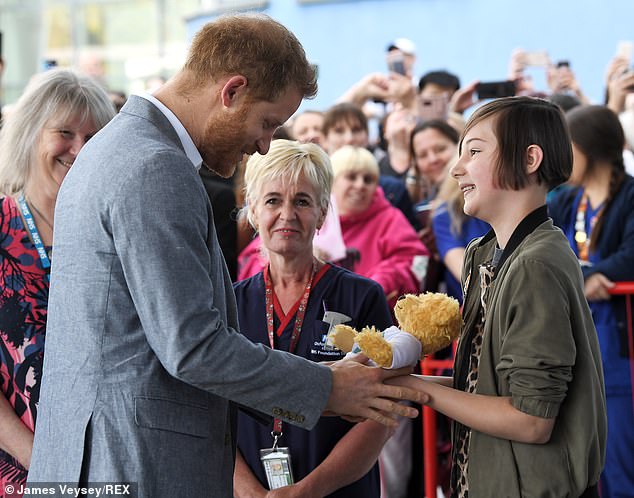 Delighted: The royal smiled as he received the teddy, which will be given to week-old Archie 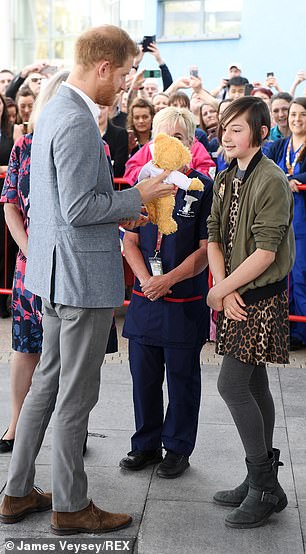 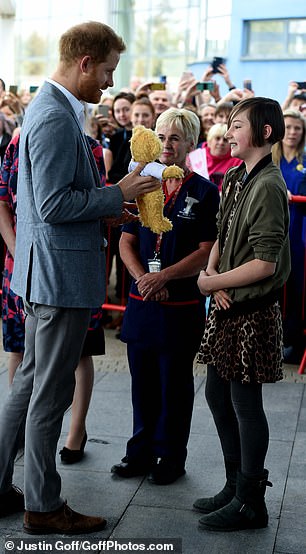 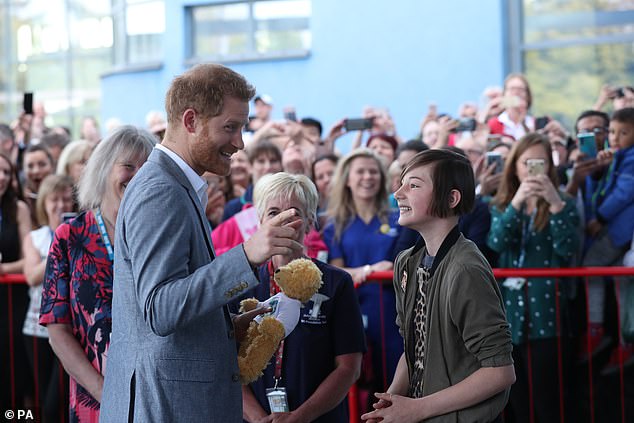 Light-hearted moment: Harry made Daisy smile with a comment on his way into the hospital

The duke will then visit Oxsrad Disability Sports and Leisure Centre, opened by his mother Diana, Princess of Wales in 1989, where he will meet people who use its facilities including those taking part in the Rebound Therapy and physiotherapy programmes.

The inclusive centre has been supporting people with disabilities through sport and physical exercise for 30 years, offering rehabilitation sessions as well as fitness classes and gym facilities.

Converted cow shed in Salcombe Devon now a four bedroom house on sale for £795,000
Drone that BARKS could replace shepherds' trusty sheepdog... allowing Fido to put his paws up
Tommy Robinson attacked by a milkshake in Warrington
Boxing fan is thrown out of Manchester Arena on big fight night for wearing a Union Jack waistcoat
Was Russian millionaire Alexander Perepilichnyy poisoned in Paris?
Indian student 'was forced to work 15-hour shifts barefoot at Tube cafe by manager
The heroes of D-Day: Poignant then and now portraits show the veterans ahead of 75th anniversary
Drunken men filmed vomiting in aisles on Ryanair 'flight from hell'