With rosy cheeks and big brown eyes, this cheeky chappy has clearly inherited a thing or two from his mother.

And if that smile is anything to go by, a passion for the great outdoors can certainly be counted among these.

Little Prince Louis looks gleeful as he crawls, covered in moss, around the garden in three photographs released by Kensington Palace to mark his first birthday today.

The Duchess of Cambridge, a keen amateur photographer, took the glorious portraits at the family’s Norfolk home, Anmer Hall, earlier this month. And how time has flown! 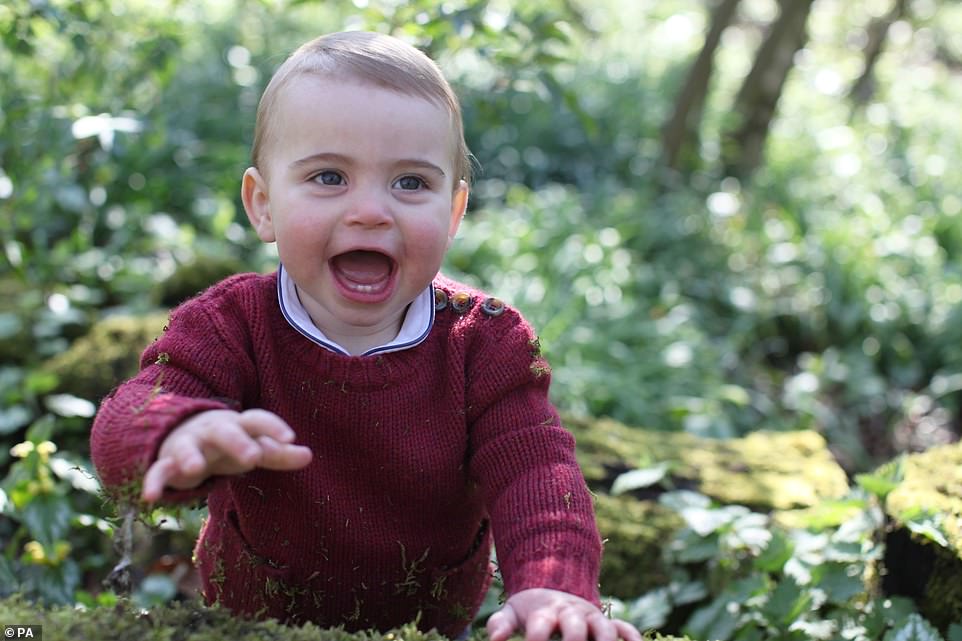 Little Prince Louis looks gleeful as he crawls, covered in moss, around the garden in three photographs released by Kensington Palace to mark his first birthday today 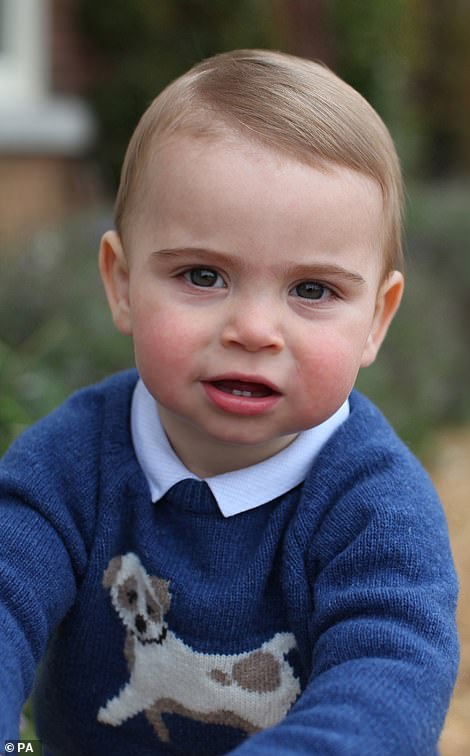 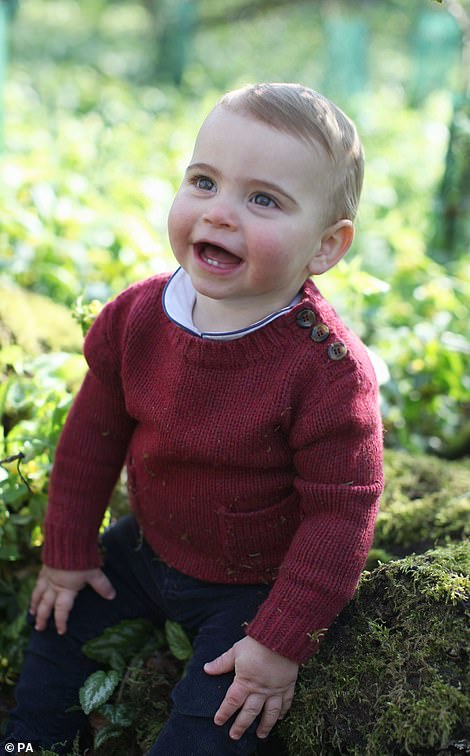 The Duchess of Cambridge, a keen amateur photographer, took the glorious portraits at the family’s Norfolk home, Anmer Hall, earlier this month. And how time has flown! While we wait for the arrival of Baby Sussex, another mini member of the Royal Family has reached a milestone!

Can you believe it’s been a whole year since Prince Louis was born? The third child of the Duke and Duchess of Cambridge turns one on Tuesday and the proud parents have released some adorable photographs to celebrate.

He’s pictured here wearing a blue jumper by Thomas Brown at Trotters, which features a super cute puppy print on the front. It’s made from a luxury blend of cashmere and merino wool and the really good news is it’s available to buy!

Or get your paws on one of the dog print jumpers we’ve got lined up for you in the edit below. How perfect is this corgi print option by The Little White Company? 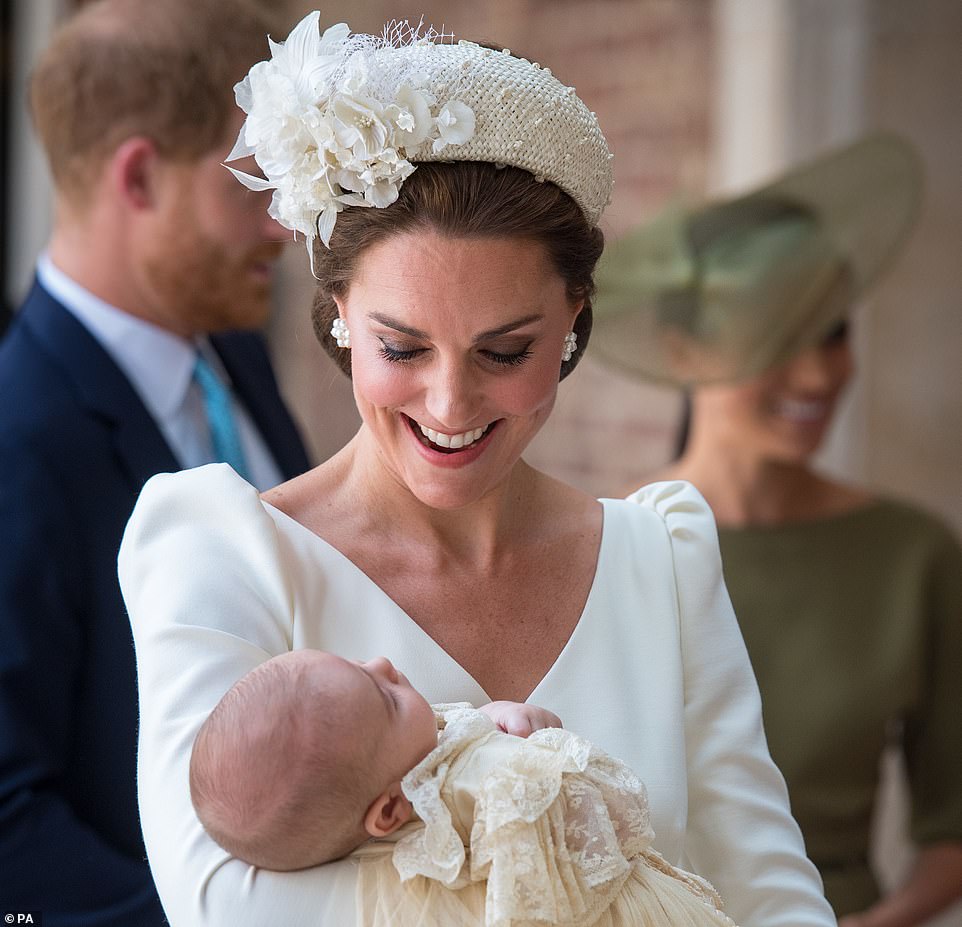 The Duchess of Cambridge carrying Prince Louis as they arrive for his christening service at the Chapel Royal, St James’s Palace, London, last year

The last time we saw Louis – who bears a striking resemblance to his mother at his age –was on the Cambridge family’s Christmas card when he was just a babe in arms.

Now Louis is crawling – and very proud of himself, too, by the looks of it.

The fifth in line to the throne is beginning to look more and more like older brother George, with his sweep of blond hair no doubt smoothed with the same styling balm that Kate, 37, uses on her eldest son.

And it’s not just the coiffure he’s adopted – under his red wool jumper, Louis appears to be wearing one of George’s romper suits, identifiable by its distinctive Peter Pan collar with blue piping.

The third in line to the throne has worn several over the years, but this looks most like the £79 romper by Rachel Riley, which he wore as a youngster on a family trip to New Zealand.

In another photo, Louis wears an adorable blue cashmere mix jumper with a puppy motif from upmarket store Trotters, which is currently on sale reduced from £44 to £35.

Although eyebrows were raised when the duchess first started using her own snaps in place of official palace photographs, there’s no doubt these candid portraits come to life with a mother’s touch – showing Louis in a natural light, happy at play. 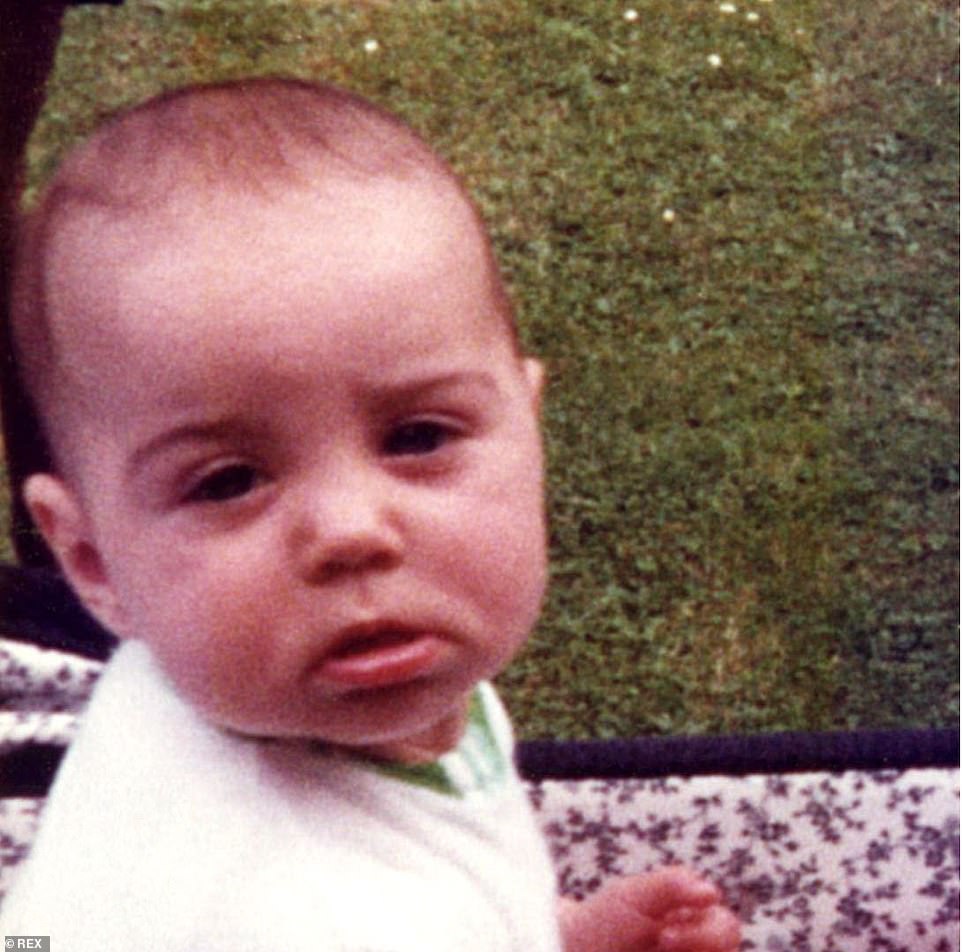 Spitting image: The prince bears a striking resemblance to mother Kate as a baby, in 1982. The Cambridge family will be spending the little prince’s birthday privately at Kensington Palace

And they capture Kate’s previous description of her youngest son as an active child who enjoys ‘bombing around’ on his baby walker. ‘He just wants to pull himself up all the time. He’s got these little walkers and is bombing around on them,’ she said.

The Cambridge family will be spending the little prince’s birthday privately at Kensington Palace, since George is due back at school and Prince William is flying later in the day to New Zealand to represent the Queen in paying respects to those affected by the Christchurch mosque shootings.

He made his public debut in his mother’s arms on the steps of the Lindo Wing at St Mary’s Hospital, Paddington.

He has been seen in public only once since then at his christening last summer.

Sources say he is a happy boy, doted on by his brother and sister. Princess Charlotte, in particular, is said to be overjoyed at having a ‘real life’ baby to look after.

But with the Duke and Duchess of Sussex’s first child due this week or next – how would the little prince feel about sharing his big day with a cousin, as well as England’s patron saint?