Pro-government gunmen have opened fire on demonstrators in Tehran, according to local reports, just hours after Trump warned ‘do not kill your protesters.’

Local media footage showed a woman with blood pouring from a purported gunshot wound in the Iranian capital centre amid furious protests against the Ayatollah’s regime.

Other images showed a ‘militiaman’ holding a shotgun running away from the scene as a crowd gathered around the woman who was allegedly killed not far from the iconic Azadi Square.

Thousands have flocked to the streets of the Iranian capital after the government admitted that a passenger jet carrying 176 people had been downed by a missile last week. 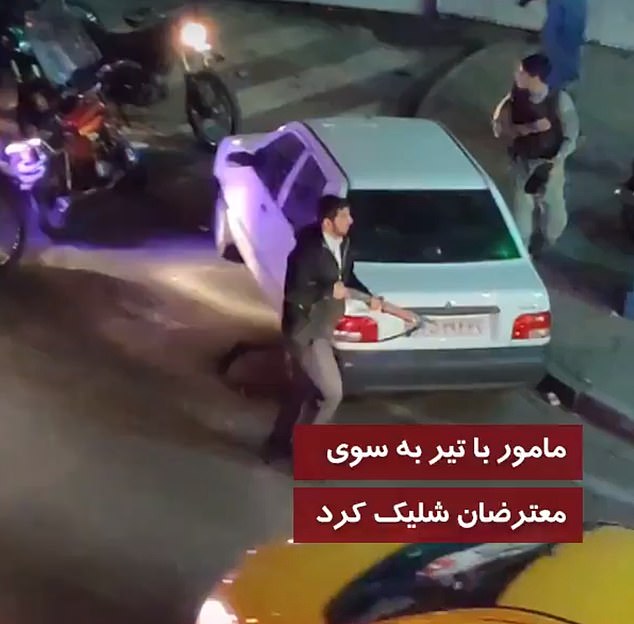 Thousands had on Saturday gathered in front of the gate of the Amirkabir University of Technology near the former US embassy in Tehran to protest the government and Iran’s Supreme Leader Ayatollah Ali Khamenei for mistakenly downing the passenger plane.

On Sunday tensions appeared to be mounting again with a heavy police presence notably around Azadi Square south of the centre.

Riot police armed with water cannon and batons were seen at Amir Kabir, Sharif and Tehran universities as well as Enqelab Square. Around 50 Basij militiamen brandishing paintball guns, potentially to mark protesters to authorities, were also seen near Amir Kabir.

Officers could be seen massing in Vali-e Asr Square in the city as calls circulated for protests. A large black banner unveiled in the square bore the names of those killed in the plane crash.

The plane crash early on Wednesday killed all 176 people on board, mostly Iranians and Iranian-Canadians.

Iran’s top Guards commander briefed parliament on Sunday, a day after the armed forces said the Ukrainian airliner was shot down in error in an admission that sparked an angry demonstration.

After initially blaming a technical failure, authorities finally admitted to accidentally shooting it down in the face of mounting evidence and accusations by western leaders.

The plane was shot down as Iran braced for retaliation after firing ballistic missiles at two bases in Iraq housing American forces.

The ballistic missile attack, which caused no casualties, was a response to the killing of General Soleimani, Iran’s top general, in a US airstrike in Baghdad.

Iranians have expressed anger over the downing of the plane and the misleading explanations from senior officials in the wake of the tragedy. 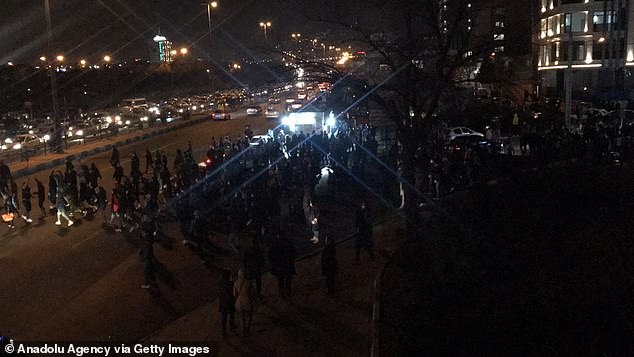 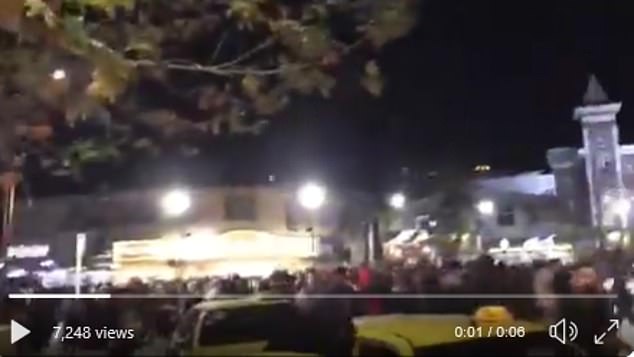 A candlelight ceremony late on Saturday in Tehran turned into a protest, with hundreds of people chanting against the country’s leaders — including Supreme Leader Ayatollah Ali Khamenei — and police dispersing them with tear gas.

Police briefly detained the British ambassador to Iran, Rob Macaire, who says he went with the intention of attending the vigil and did not know it would turn into a protest.

‘Can confirm I wasn’t taking part in any demonstrations!’ he tweeted. ‘Went to an event advertised as a vigil for victims of #PS752 tragedy. Normal to want to pay respects — some of victims were British. I left after 5 mins, when some started chanting.’

He said he was arrested 30 minutes after leaving the area.

The UK said its envoy was detained ‘without grounds or explanation’ and in ‘flagrant violation of international law’.

‘The Iranian government is at a cross-roads moment. It can continue its march towards pariah status with all the political and economic isolation that entails, or take steps to de-escalate tensions and engage in a diplomatic path forwards,’ Foreign Secretary Dominic Raab said in a statement.

Iran’s deputy foreign minister Abbas Araghchi later tweeted that Macaire was arrested ‘as an unknown foreigner in an illegal gathering’.

Araghchi said when police informed him that a man was arrested who claimed to be the British ambassador he did not believe them.

But he said that once he spoke toMacaire by phone he realized it was him, and that the ambassador was freed 15 minutes later.

Alaeddin Boroujerdi, a member of Iran’s parliamentary committee on national security and foreign policy, nevertheless accused the ambassador of organizing protests and called for his expulsion.

Dozens of hard-liners later gathered outside the British Embassy over the weekend, chanting ‘Death to England’ and calling for the ambassador to be expelled and for the closure of the embassy. Police stood guard outside the facility.

Iranian media, meanwhile, focused on the admission of responsibility for the crash, with several newspapers calling for those responsible to apologize and resign.

The hardline daily Vatan-e Emrouz bore the front-page headline, ‘A sky full of sadness,’ while the Hamshahri daily went with ‘Shame,’ and the IRAN daily said ‘Unforgivable.’