This is the shocking moment a group of protesting farmer workers in South Africa halted their demonstration to hijack passing trucks loaded with flatscreen televisions.

Dozens of angry workers had been taking part in a lawful strike over pay conditions in De Doorns, Western Cape, around 90 miles from Cape Town.

But they later abandoned their protest and instead decided to target two haulage vehicles carrying electronic goods.

The group managed to get the haulage trucks to stop on a busy highway before forcing their way inside where they began helping themselves to televisions and other goods, reports The Times (South Africa).

Shockingly, the scenes took place in front of several small children – with some even joining in the theft.

Footage of the raid, which was caught on camera by a bystander, shows a truck surrounded by a horde of looters as they rip away the canvas on the side of the vehicle. 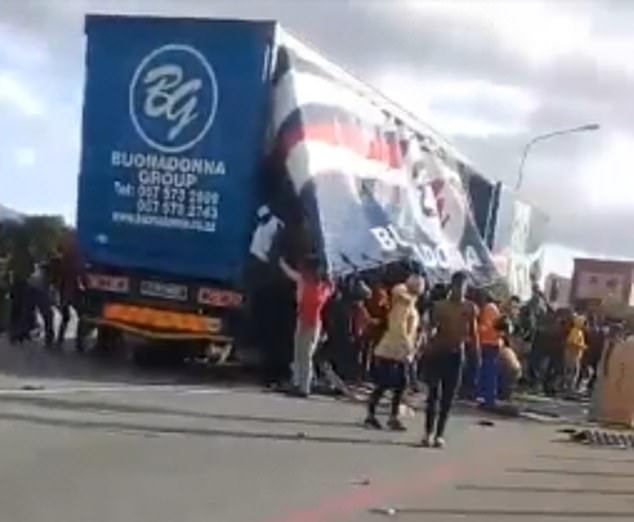 A group of protesting farmer workers in De Doorns, South Africa, halted their demonstration over pay conditions to hijack a passing truck loaded with flatscreen televisions 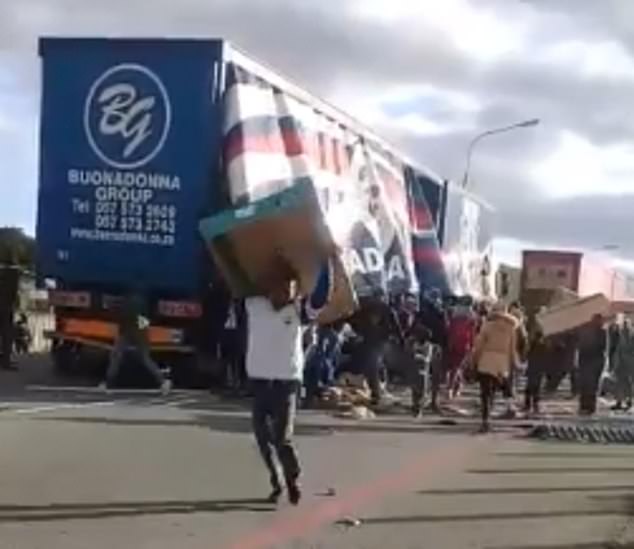 Two heavy goods vehicles were flagged down on a busy highway before being looted by both adults and children, as a bystander recorded the thefts

The local workers are then seen pulling out flatscreen televisions in cardboard boxes that they then hold above their heads as they flee.

A car then approaches the crowd with the driver furiously honking the horn at the looters before squeezing past them.

Several more boxes are unloaded and carried away – including some by women and children.

A second video shows the loot from another angle as children run away with what appear to be multipacks of drinks followed by more adults calmly walking off with televisions.

Western Cape SAPS spokesperson, Noloyiso Rwexana told The Times: ‘Public order Policing (POP) and other law enforcement agencies are on the scene in De Doorns, where community members embarked on a strike.

‘Two trucks were reported looted. Police are following up on the people who looted the truck. No one has been arrested so far.’ 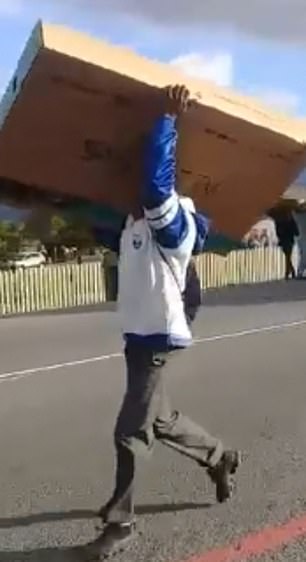 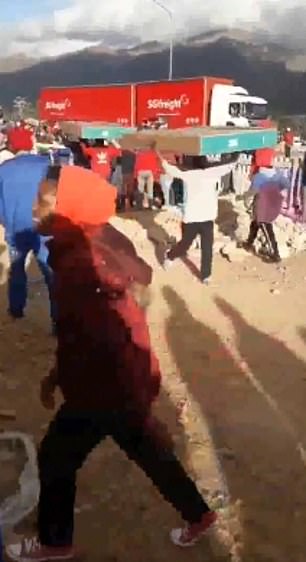 Western Cape traffic chief Kenny Africa told the newspaper that the road had been closed in both directions as the situation remained ‘volatile’.

He said: ‘They (rioters) are stoning cars and looting trucks. It’s unsafe to use the N1 until such time as the police are able to get this thing under control.

‘Motorists should avoid the area if possible.’

The video clips has since gone viral on social media with more than 45,000 views which prompted people online to call for swift punishment against the offenders.

Abigail Morudu said: ‘You have the evidence, faces very clear. Make arrests and make sure they are named and shamed.’

Ngaka Emjay wrote: ‘Very easy to get the perpetrators. Each household will be having a new LCD screen without documentation.’

Praise Moyo added: ‘This kind of behaviour may deter potential investors. The Government must take this very seriously.’

It is not thought that any arrests have yet been made.