The sole flicker Theresa May betrayed, on hearing that thumping defeat, was a rueful grimace, her upper lip slightly pursed.

Seconds later, she hauled herself to her feet, voice somehow level though her blood must have been pumping, to say she would wait to see if her Government still had the House’s confidence.

If it did, she would work with political opponents. That now means 432 MPs, with some 432 different theories of what to do.

The Chamber was packed, tingling, a-quiver with the occasion.

They were standing 14-deep down at the far end, Members spilling into the lobby beyond, craning necks to grab a glance at the woman on the scaffold at the centre of it all. But what the evening lacked, dramatically, was tension. 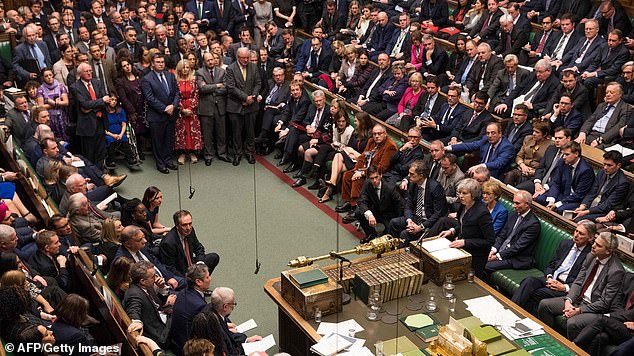 The sole flicker Theresa May betrayed, on hearing that thumping defeat, was a rueful grimace, her upper lip slightly pursed. Seconds later, she hauled herself to her feet, voice somehow level though her blood must have been pumping, to say she would wait to see if her Government still had the House’s confidence

There had not, from the start of the long debate on Mrs May’s doomed deal, been any doubt that it was going to be defeated by Opposition MPs, Tory Remainers and scores of Tory Leavers (the last seeing this deal as an Establishment sell-out, insufficiently Brexity).

For all the fervour, the lack of suspense about the result robbed the evening of a certain place in the history of parliamentary spectacles.

But it was certainly, ahem, an unusual episode. ‘Greatest defeat for a government since the 1920s,’ said Jeremy Corbyn.

Sir Patrick McLoughlin (Con, Derbyshire Dales): ‘You were here?’ Mr Corbyn, not for the first time, sank to the moment. Terrible.

Where the country might have appreciated statesmanship, the Labour leader just shrieked about Mrs May’s ‘sheer incompetence’. On this of all nights, he managed to make her look dignified.

The day’s debate had begun with an extraordinary speech by Attorney-General Geoffrey Cox, so magisterial that Speaker Bercow addressed him as ‘Sir Geoffrey’.

Cox swivelled, he boomed, he wrung emotion from his chops and very eyeballs. He waved his elbows, tickling the air with his fingertips. He could have been Simon Rattle conducting the Berliner Philharmoniker.

His arguments, imploring the Tory party to support Mrs May’s deal, were the most impressive case I had heard for the dead deal. I say that as a Leaver who regarded it as a grossly sub-standard proposal.

Yet Mr Cox carried weight because he is a keen Leaver, one of too few in Mrs May’s inner counsels. What a pity she never grabbed the positive possibilities of Leave from July 2016 onwards.

At times Mr Cox turned his back almost completely on the Opposition benches to address the Tory backbenches beyond the gangway, where the David Davis/Boris Johnson wing of the party sits. ‘Unlock the airlock and take us into the next stage,’ he boomed. Labour hecklers called the airlock ‘a vacuum’.

Speaking to MPs opposing the deal (both Remainers and Leavers), Mr Cox cried: ‘What are you playing at? You are not children in the playground. You are LEGISLATORS! We are playing with people’s lives. Do we opt for order or do we choose chaos?’

Beside him sat the Prime Minister, as we can still call her at least for a day or so, shrivelled by tiredness and, perhaps, by the realisation she should have used Mr Cox’s rhetorical gifts much more. 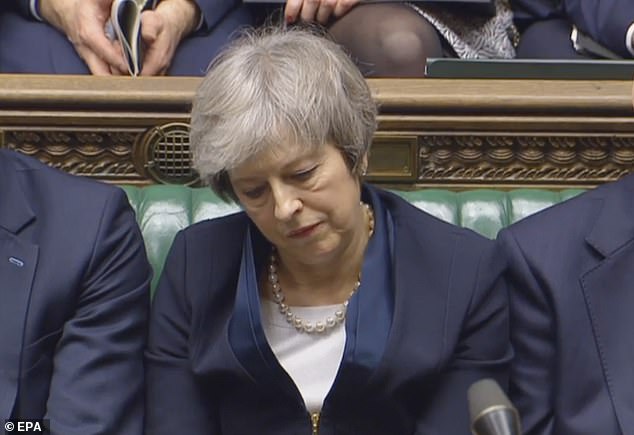 The Chamber was packed, tingling, a-quiver with the occasion. They were standing 14-deep down at the far end, Members spilling into the lobby beyond, craning necks to grab a glance at the woman on the scaffold at the centre of it all. But what the evening lacked, dramatically, was tension

By now he was into a passage about how foreign fishermen would not be allowed to ‘point the prows of their trawlers one metre’ into British fishing waters thanks to Mrs May’s deal. Metre, Geoffrey? Fathom might have been more Nelsonian.

Mr Cox used urgent, vivid language of a sort the May regime has so terribly lacked. Not that fellow lawyer Dominic Grieve (Con, Beaconsfield) approved. He snootily deplored Mr Cox’s ‘theatricality’ and said it was a sign of the Government’s weakness that it ‘had to rely on the advocacy skills of a criminal defence advocate’. That’s lawyer-speak for ‘he’s just a High Court show-off and I am seething with envy’. Mr Cox is certainly proving a far more memorable Attorney-General than he ever was.

On a long day when so many inadequates rambled through cliches, Julian Lewis (Con, New Forest E) excelled.

His speech was just one sentence: ‘Because Brexit means Brexit and no deal is better than this bad deal, I shall vote no, no, no.’ Mr Lewis was echoing Margaret Thatcher. Members and gallery spectators alike were grateful to him for his brevity.

Crispin Blunt (Con, Reigate) asked: ‘What would Remainers do without Project Fear? They’d have to think up convincing, positive arguments for staying in the EU.’ They would struggle to think of many, he felt.

Stalwart Brexiteer Richard Bacon (Con, S Norfolk), firmly of the view that the political class has been trying to wreck the referendum vote, reached for a satirical line from German poet Bertolt Brecht: ‘Would it not be easier for the Government to dissolve the People and elect another?’

Just before the vote, up in the visitors’ gallery, sat Sally Bercow, the Speaker’s wife.

She was waving cooee to Labour MPs while her companion blew kisses at them. Classy. If Mrs May had only listened more to the Brexiteers and Bertolt Brecht, less to Philip Hammond and Whitehall mandarins, she might have won parliamentary backing for a treaty.

But now she has been consigned to another circle of political hell – working with Yvette Cooper and Sir Keir Starmer and Sir Bill Cash. In that flaming, scream-racked realm she and we will be detained until March 29, when for the sake of national safety, if not national sanity, we must, despite yesterday’s hoo-hahs, still leave Herr Selmayr’s European empire.

Naked Bike Ride sees thousands baring all through the streets of London
Bike yob crashes into a Mercedes as he does WHEELIES while weaving through traffic
Choice's four tips for stacking your dishwasher for a cleaner wash
Trump's protocol ambassador forced out amid internal probe
How will schools in England reopen? The government refuses to reveal how secondaries will work
Groundbreaking nerve surgery allows 13 paralysed patients to regain the use of their arms
Topless women protest at last meeting of far-right Spanish Vox party before elections
Roxy Jacenko looks chic in Givenchy t-shirt and Saint Laurent tote at Catch in Los Angeles