A young rape victim given a 30-year prison sentence after being accused of having an abortion has been cleared after a re-trial.

Evelyn Beatriz Hernández, 21, had served two years and nine months behind bars when her conviction was overturned and a re-trial was ordered.

It was the first case of its kind in El Salvador, where abortion is banned in all circumstances – even if the mother is raped or is at risk of dying in childbirth.

Women convicted of having an illegal abortion can face murder charges, with prosecutors in Hernandez’s case asking for her to serve 40.

But yesterday she was acquitted by a judge in the town of Ciudad Delgado to the joy of her family and pro-choice activists around the world.

‘Thank God, justice was done,’ Hernández said following the verdict, visibly emotional as dozens of women waited at the courthouse on the outskirts of the capital, San Salvador. 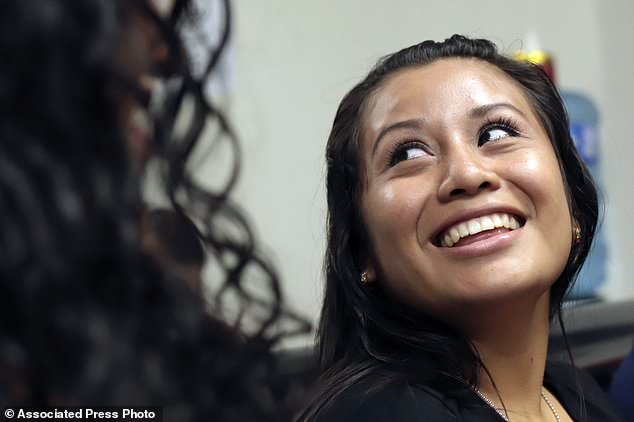 Evelyn Beatriz Hernández, 21, has been cleared after a re-trial found her not guilty of aborting her baby illegally in El Salvador, where there is a total ban on terminations

‘I also thank you who have been present here. Yes we did!’ she said to all the women gathered.

Hernández thanked foreign diplomats who have followed her extraordinary case closely and lobbied for her release.

The 21-year-old’s foetus was at 32 weeks in 2016 when she felt intense abdominal pains and delivered it into an outdoor toilet.

It was later found lifeless in a septic tank, with her mother claiming she discovered her daughter passed out next to the latrine. 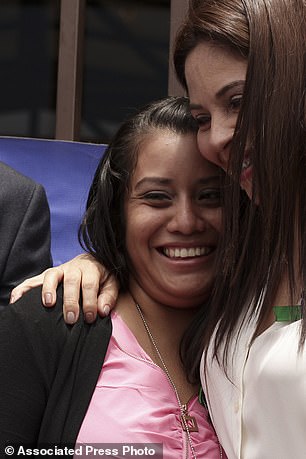 Both women maintained Hernandez didn’t know she was pregnant and that there was a foetus in the tank, but prosecutors didn’t believe them and pressed charges.

Forensic experts were ultimately unable to determine whether it died in the uterus or in the septic tank.

At the retrial, prosecutors’ used the argument of commission by omission, which means she failed to protect her foetus.

‘We believe the judge has been very fair in his ruling,’ defence lawyer Bertha María Deleón said.

‘He has said that there was no way to prove a crime and for that reason he absolved her,’ she sadded.

El Salvador is one of three Central American nations with total bans on abortion. Women convicted of having abortions face sentences of two to eight years.

But women who turn up at public hospitals following a miscarriage are sometimes accused of having killed the foetus and charged with aggravated homicide, which carries a sentence of 30 to 40 years. Such punishments often fall on poor, young women and victims of rape.

‘This is a resounding victory for the rights of women in El Salvador.

‘It reaffirms that no woman should be wrongly accused of homicide for the simple fact of suffering an obstetric emergency,’ said Erika Guevara-Rosas, Americas director at Amnesty International.

Guevara-Rosas called on El Salvador to cease ‘criminalizing women once and for all by immediately revoking the nation’s draconian anti-abortion laws.’ 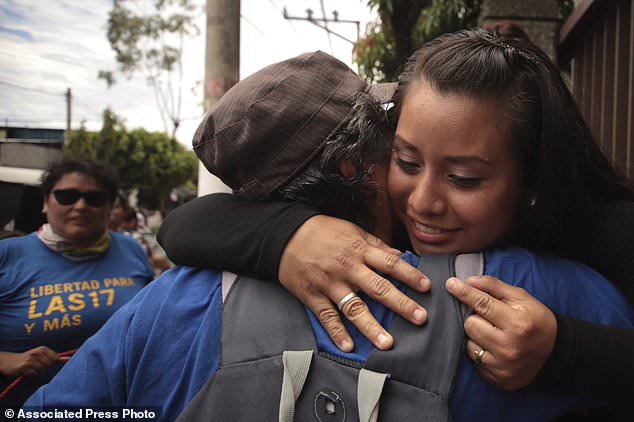 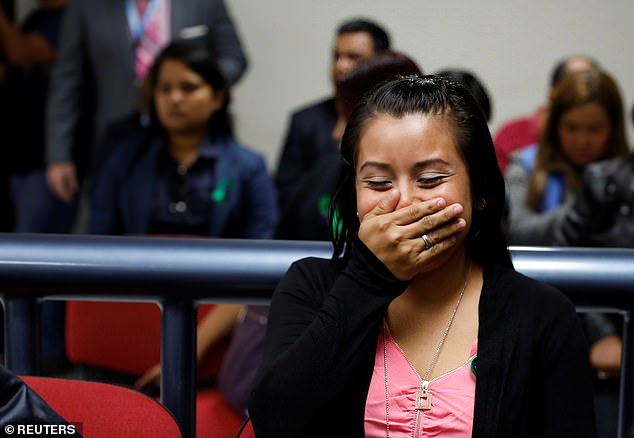 Evelyn Hernandez, who was sentenced to 30 years in prison for a suspected abortion, shows her joy at being acquitted yesterday

El Salvador is a deeply religious country with 80 per cent of the population identifying as Catholic or evangelical Christian.

It is also home to macho attitudes on women’s role in society, as well as widespread gang violence.

‘We judge cases based on religious convictions, often for things that should never enter in a courtroom,’ defence lawyer Arnau Baulenas said.

‘We have to stop using justice to respond to social needs,’ Baulenas added. ‘Justice should do its work with criminals, not innocent people.’

Every year an estimated 25,000 women are impregnated after rapes in the central American nation of just over 6 million.

It is believed that thousands of clandestine abortions are carried out each year in El Salvador.

Recent polls have shown broad support for more lenient abortion laws, though many in the country believe rape victims should be made to carry pregnancies to term.

Hernández’s case was seen as a test for women’s reproductive rights under new President Nayib Bukele, who has said he believes abortion is acceptable only when the mother’s life is at risk but that he opposes criminalizing women who have miscarriages.

‘If a poor woman has a miscarriage, she’s immediately suspected of having had an abortion,’ Bukele said in 2018. ‘We can’t assume guilt when what a woman needs is immediate assistance.’ 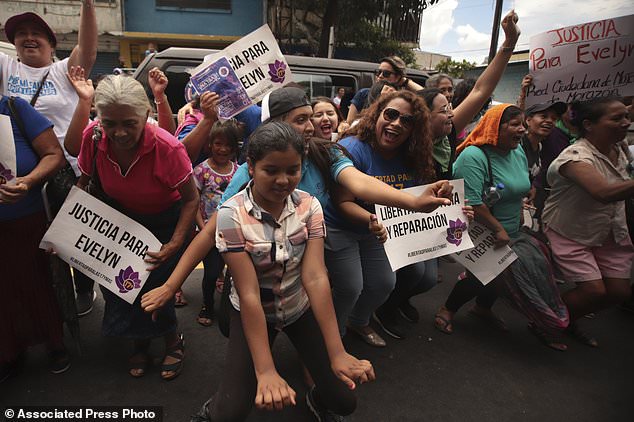 Idris Elba is MARRIED! Actor, 46, ties the knot with Sabrina Dhowre, 29, in idyllic Moroccan wedding
Boris Johnson 'will dare the Queen to SACK him by SQUATTING in Downing Street' to get Brexit done
Nigel Farage's VERY well-preserved 78-year-old mother – and Vera Duckworth lookalike
Brexit live: Raab and McVey quit as May prepares to...
Wayne and Coleen Rooney's £20m 'Morrisons' manor is 'flooded'
Bernie Sanders fires up home crowd in Vermont in bid to reignite his 2020 campaign
Tens of thousands take to the streets of London to demand a People's Vote
Oxford University gets its largest donation in 500 years as US billionaire hands over £150 MILLION