Months after Alex Ovechkin and the Washington Capitals won the first Stanley Cup title in franchise history, the St. Louis Blues are looking to follow in their footsteps.

“They don’t give up after a lot of tough years,” star winger Vladimir Tarasenko said. “They work on their game, play hard and finally reach their goal, so this is a really good example for us. I think that’s what we need to try to do.”

St. Louis also is looking for the franchise’s first championship. The Blues missed the playoffs last year after six consecutive appearances, falling one point shy of continuing the streak when they lost 5-2 at Colorado on the final day of the regular season.

General manager Doug Armstrong could have taken the franchise in a different direction after the disappointing finish, but he decided to strengthen the roster instead. The Blues signed center Tyler Bozak, wingers David Perron and Patrick Maroon, and backup goaltender Chad Johnson in free agency, and traded for center Ryan O’Reilly in a blockbuster deal with Buffalo. 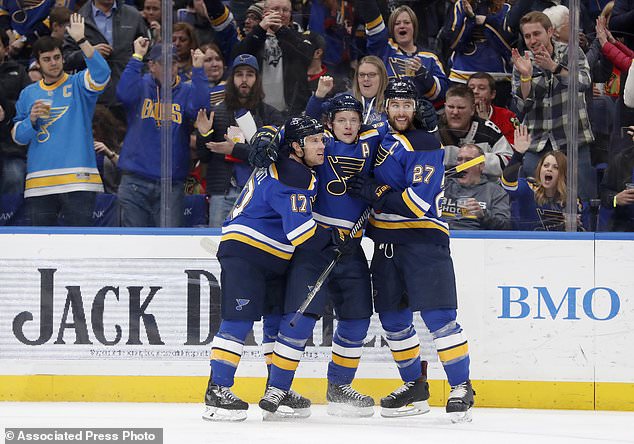 FILE – In this April 4, 2018, file photo, St. Louis Blues’ Vladimir Tarasenko, of Russia, is congratulated by teammates Jaden Schwartz (17) and Alex Pietrangelo (27) after scoring during the second period of an NHL hockey game against the Chicago Blackhawks, in St. Louis. The Blues begion their season on Oct. at home against Winnipeg. (AP Photo/Jeff Roberson, File)

“It’s obviously huge,” said Brayden Schenn, who set career highs with 28 goals and 42 assists in his first year with St. Louis. “You look at our division, how tight it’s going to be, how tight the West is going to be, you’ve got to have the pieces to compete and we feel like we have that in this locker room.”

With Schenn, O’Reilly and Bozak, the Blues have one of the league’s strongest groups of centers. Perron collected a career-high 50 assists last season while helping expansion Vegas make it to the Stanley Cup Final, and the rugged Maroon had 17 goals and 26 assists in 74 games with Edmonton and New Jersey.

The Blues are hoping the new additions will help them get back to their usual lofty spot in the rough-and-tumble Central Division – and then make some playoff history.

“We need to learn from last year,” Tarasenko said. “It’s not enough to play up and down all year and then fighting for one point, I don’t think that’s the spot where we want to be. I think our goal is to make the playoff without questions and just win the Cup, so that’s what we need to do and play more consistent during the season.”

Robby Fabbri missed all of last season after re-tearing the anterior cruciate ligament in his left knee. He was activated off injured reserve before the start of training camp, but he has been slowed by a groin strain. The 22-year-old Fabbri was selected by St. Louis in the first round of the 2014 draft. He had 29 goals and 37 assists in 123 games before the run of injuries, and could add to the Blues’ forward depth if he can find a way to stay healthy.

“He can do everything,” Tarasenko said. “He’s smart and can score, can pass the puck, like play the game well. You know when we was playing together, it was fun. I like spending time on the ice with him.”

St. Louis finished 30th in the 31-team NHL with a 15.4 percent success rate on the power play last season, just ahead of Edmonton at 14.8 percent. The Blues had just 38 power-play goals.

The 26-year-old Tarasenko remains one of the NHL’s most gifted scorers. He had 33 goals and 33 assists in 80 games last season. But Tarasenko had left shoulder surgery on April 11 after he got hurt in a collision with Colorado captain Gabriel Landeskog in the regular-season finale.

Allen missed the start of training camp due to back spasms. The 28-year-old Allen had a 2.75 goals-against average and .906 save percentage while splitting time with Carter Hutton last season, and his play is a big key for the Blues this year.

Jay Cohen can be reached at http://www.twitter.com/jcohenap 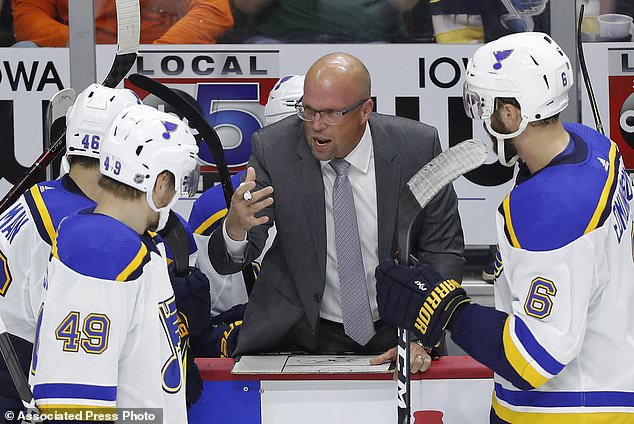 FILE – In this Sept. 19, 2018, file photo, St. Louis Blues head coach Mike Yeo talks to his team during a time out during the third period of an NHL preseason hockey game against the Minnesota Wild, in Des Moines, Iowa. The Blues begin their season on Oct. 4 at home against Winnipeg. (AP Photo/Matthew Putney, File) 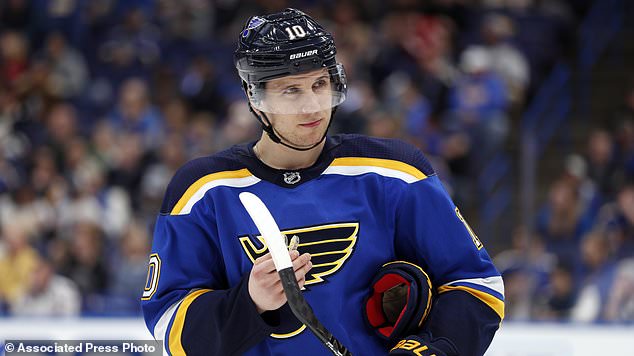 FILE – In this Monday, April 2, 2018 file photo,St. Louis Blues’ Brayden Schenn is seen during the third period of an NHL hockey game against the Washington Capitals in St. Louis. One talented Russian winger. Deep lines and pairings. Years of playoff heartache.Months after Alex Ovechkin and the Washington Capitals won the first Stanley Cup title in franchise history, the St. Louis Blues are looking to follow in their footsteps. (AP Photo/Jeff Roberson, File)

Young Brexiteers savage Remain campaigner who attacked Tory, 19, over Brexit Party support
The British dignitaries who escorted Trump's administration into the State Banquet
Val Kilmer claims a 'dark angel' who looked like Darth Vader 'tore out my heart'
Dress Princess Diana wore during her 1986 visit to the Gulf states is sold along two other frocks
Jamie and Rebekah Vardy fail in bid to trademark phrase 'Chat s***, get banged'
Fraser on the money at Australian Open
Burger King launch jalapeno chicken fries and a value melt range
The Queen attends church service in Sandringham