A die-hard Remainer has lost an attempt to bring Boris Johnson before the Supreme Court over his claims that the UK sends the EU £350million each week that could pumped back into the NHS.

Marcus Ball’s ‘Brexit justice’ case was thrown out by judges sitting at the Court of Appeal in London this morning – but he insisted afterwards: ‘This isn’t over’.

He has failed to bring a private prosecution against the Prime Minister over his claim the UK sends £350 million a week to the European Union – which appeared on the side of a bus in the run up to the historic 2016 vote.

A decision to issue a summons was made by a district judge in May for Mr Johnson to attend Westminster Magistrates’ Court to face three allegations of misconduct in public office.

But the decision was ruled ‘unlawful’ and quashed by High Court judges at a hearing in June.

Mr Ball said in July that his legal team had filed an application for permission to appeal to the Supreme Court over the ruling.

But the application was thrown out again this morning by Lady Justice Rafferty – one of the High Court judges who quashed the original decision. 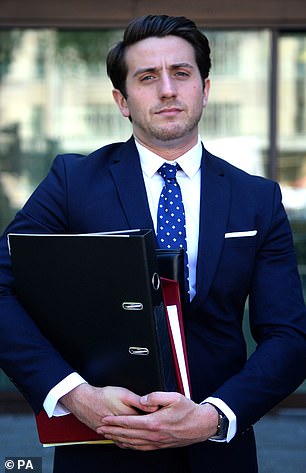 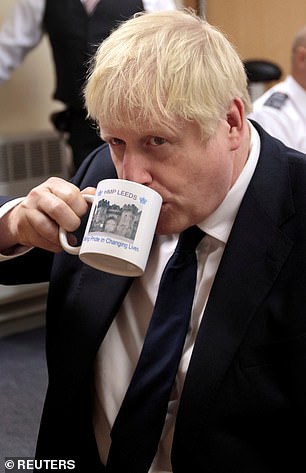 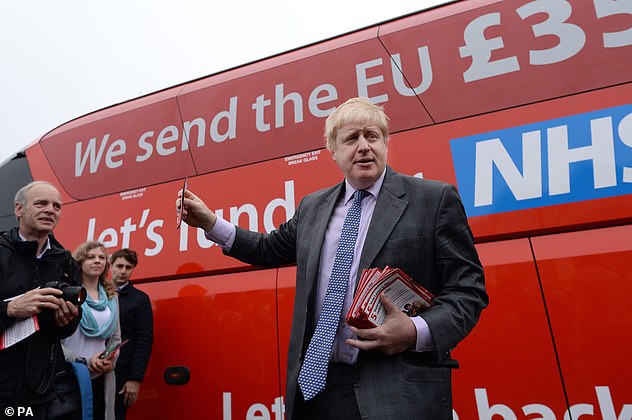 The man who targeted Boris Johnson is a die-hard Remainer who has spent the three years since the Brexit referendum working on his case against the Leave figurehead.

Marcus Ball, 29, has relied on crowdfunded donations of more than £200,000 to employ a team of lawyers to fight on his behalf – boasting that the case was a ‘world first’.

However, it emerged Mr Ball spent nearly £50,000 of the donations on himself, on self-defence classes, a luxury flat and branded cupcakes.

The start-up company entrepreneur from Norfolk, who worked developing mobile app including a political Tamagotchi, founded Brexit Justice in June 2016.

He has also previously worked as a speaker and writer as well as campaigning to reform higher education in the UK.

He is a well-known Instagrammer who often films himself discussing the case in the bedroom of his west London flat, which has signs on the wall including: ‘When politicians lie, democracy dies’ and ‘Brexit justice’.

Describing his motivations he said: ‘I was just like, ‘F*** this. This has to stop. It’s not impossible to stop it.’

It followed the 2016 referendum campaign in which Mr Ball says Mr Johnson abused the public’s trust.

He has since built a case against Mr Johnson for the last two years.

Initially the campaign wanted to bring prosecutions against six ‘remain and leave campaigners’ but decided to pursue only Mr Johnson after reviewing the evidence. The others have not been identified.

A source close to Mr Johnson accused Mr Ball of being politically motivated, saying: ‘He is deeply dishonest about his intention – which is to frustrate the largest ever popular vote in British history.’

In a brief announcement, she said: ‘This application for leave to appeal to the Supreme Court is rejected.’

Mr Ball now has the option to apply directly to the Supreme Court for permission.

Speaking outside court after the ruling, he said: ‘This isn’t over, we are not giving up. We are pursuing it, absolutely.’

The £350 million figure was emblazoned on the red campaign bus used by Vote Leave during the referendum, with the slogan saying ‘We send the EU £350 million a week, let’s fund our NHS instead’.

Giving reasons for the High Court’s ruling in July, Lady Justice Rafferty said the ‘problem of false statements in the course of political campaigning is not new’ and that Parliament had enacted laws to deal with ‘certain false campaign statements which it considers an illegal practice’.

However, she said this did not include false statements relating to publicly available statistics, and found that the district judge’s decision would have ‘extended the scope’ of the offence of misconduct in a public office.

The £350 million figure was emblazoned on the red campaign bus used by Vote Leave during the referendum, with the slogan saying ‘We send the EU £350 million a week, let’s fund our NHS instead’.

Giving reasons for the High Court’s ruling in July, Lady Justice Rafferty said the ‘problem of false statements in the course of political campaigning is not new’ and that Parliament had enacted laws to deal with ‘certain false campaign statements which it considers an illegal practice’.

However, she said this did not include false statements relating to publicly available statistics, and found that the district judge’s decision would have ‘extended the scope’ of the offence of misconduct in a public office.

Boris Johnson triggered a round of Tory infighting and a spat with the country’s statistics watchdog after setting out his vision for Brexit in 2017.

The then foreign secretary used a 4,000-word essay in the Daily Telegraph to revive the widely-criticised claim that quitting the European Union would allow the UK to take back control of £350 million a week, some of which could be used to boost NHS funding.

The claim first attracted criticism during the referendum campaign in 2016, when Mr Johnson travelled around the country in a bus emblazoned with the slogan ‘We send the EU £350 million a week, let’s fund our NHS instead’. 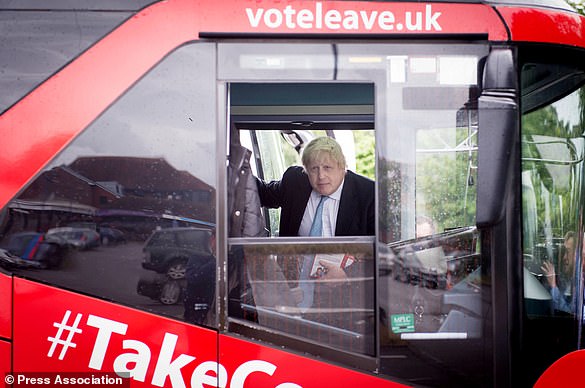 Boris Johnson was a key player for Vote Leave, often campaigning on the battlebus which was adorned with the slogan

Mr Johnson was one of the key figures in the Leave campaign and his Telegraph piece was an attempt to show optimism about the Brexit process, to insist that ‘this country will succeed in our new national enterprise, and will succeed mightily’.

His revival of the £350 million claim led to a rebuke from UK Statistics Authority chairman Sir David Norgrove, who said it was a ‘clear misuse’ of official figures.

Brexiteers claimed the figure represented the amount of money the UK does not have control over as a result of EU membership, but it does not include the rebate or take into account any funding that flows back from Brussels.

The Environment Secretary, who spectacularly torpedoed Mr Johnson’s run for the Tory leadership after the Brexit vote, expressed support for his Cabinet colleague and accused critics of trying to ‘refight’ the referendum.

Mr Gove tweeted: ‘In the debate on EU contributions it’s important people look at what Boris actually wrote in his Telegraph article, not headlines.

‘Debate should be forward looking on how to make most of life outside EU, not refighting referendum.’ 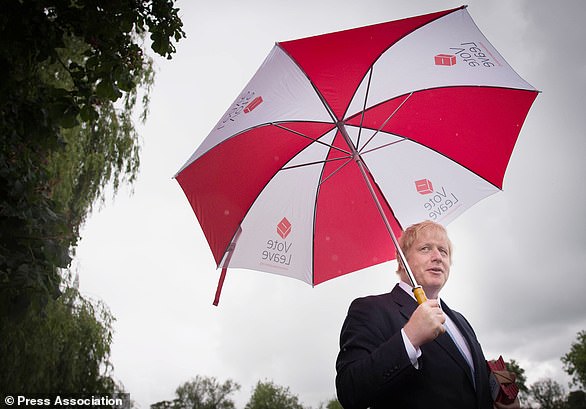 In 2016, numerous MPs and campaigners were prompted to ask the Government when the money will be made available to the health service

Philip Dunne, speaking as a health minister in September that year, said the NHS should not ‘count any chickens’ when it comes to getting the cash promised by Brexiteers.

He said the pledge was not something ‘any health ministers were part of’, in what was the latest twist at the time.

In November 2017, head of NHS England Simon Stevens called on Brexiteers to make good on the pledge.

He said: ‘Rather than our criticising these clear Brexit funding commitments to NHS patients – promises entered into by Cabinet ministers and by MPs – the public want to see them honoured.

‘By the end of the NHS’s next financial year – March 2019 – the United Kingdom will have left the European Union.

‘Trust in democratic politics will not be strengthened if anyone now tries to argue, ‘You voted Brexit, partly for a better funded health service. But precisely because of Brexit, you now can’t have one’.’

In that same month, Mr Johnson insisted ‘substantial sums’ will be available for the NHS from the £350 million a week.

He repeated the figure and made the pledge as he opened the third day of the Budget debate.

Speaking in the Commons, Liberal Democrat former minister Tom Brake intervened to ask: ‘Can he set out in the House when he is going to deliver his promise of £350 million a week for the NHS?’

As he was heckled by Conservative MPs, Mr Brake added: ‘They don’t like hearing about it, do they?’

Mr Johnson replied: ‘With pleasure – as he knows full well, when we leave the European Union there will be at least £350 million a week of which we will take back control.

‘And as he knows full well, substantial sums from that funding will be available for use in our National Health Service.

Jeremy Corbyn launches assault on Donald Trump after President backs Johnson's suspend Parliament
Arsenal boss Unai Emery prizes European trophy over a top-four finish
David Cameron opens up on life with his wife Samantha in his memoirs
Moment robbers who broke into 20 shops with stolen cars and caused £100,000 in damage are caught
Greater Manchester Police arrest two men as they crack down on illegal raves
Woman, 21, raped in her sleep sees attacker jailed for four years after secretly recording him
Freedom for Facebook used social network's ads against it by buying up sponsored ads
Woman dies on Ben Nevis after New Year's Day fall