Restaurant chains serve meals that are more calorie-packed than those sold by fast-food companies, say researchers.

They found that the average meal in a ‘full-service’ diner contained an astonishing 1,033 calories, while dishes from takeaway chains had an average of 751.

The researchers from the University of Liverpool said their ‘shocking’ findings probably underestimated the number of calories consumed because they did not include drinks, starters, desserts or side orders. 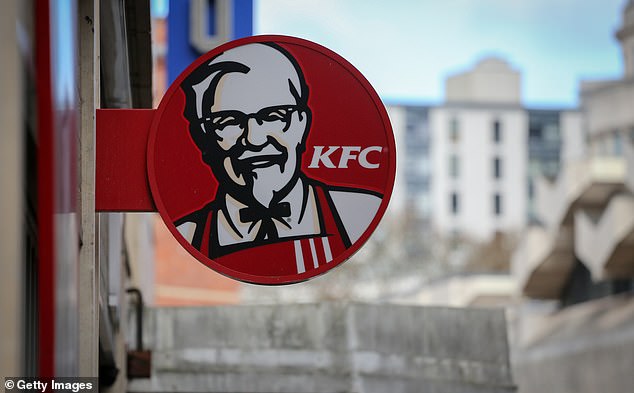 A study found that only one of 27 chain restaurants in the UK sells meals with an average meal calorie count of 600 or less – Public Health England’s recommended limit. It also found KFC and McDonalds have lower average calorie counts for their meals than most chains

Out of the 27 chains assessed, only one – Leon – sells food with an average of less than the 600-calorie maximum recommended by Public Health England.

Hungry Horse, which runs 284 pub-restaurants across Britain, has the most calorie-packed food of those surveyed, with an average meal containing 1,358.

For those with a hefty appetite, it serves meals such as the 3,505-calorie rack of St Louis ribs, or the 3,318-calorie Smokin’ Jack Burger.

Each of those contains well over an entire day’s recommended calorie intake, which stands at 2,500 for men and 2,000 for women.

A further ten restaurant chains each recorded averages of more than 1,000 calories per meal.

Of all the meals assessed, 89 per cent at full-service restaurants and 83 per cent at fast food chains breached the 600-calorie limit for a single meal.

Britain is in the midst of a major public health crisis, with the third highest rates of obesity in Europe.

HOW THE GOVERNMENT IS TRYING TO STOP OBESITY

The proposed plans to restrict the number of calories in pizzas, pies and ready meals comes as part of drastic Government moves over the past year to try and cut down on obesity.

A tax on added sugar in drinks came into force in April, requiring companies to hand over more of the money they make from drinks which contain more than 5g of sugar per 100ml of liquid.

As a result, many soft drinks have had their recipes changed in order to avoid paying the tax and putting prices up. Sugary drinks are the biggest single source of sugar for children and teenagers.

The Government is also considering making it compulsory for all restaurants and fast food outlets to display the number of calories in each meal on their menu.

Some food outlets already do this but there can be unexpected numbers of calories in popular dishes, and the Government is consulting on the plans before a decision is due in spring.

In March this year, Public Health England warned Brits to crack down on the number of calories they’re eating, advising people to consume no more than 1,600 per day.

The watchdog says adults shouldn’t eat any more than 400 calories for breakfast, 600 for lunch and 600 for dinner – this would allow for some snacks, experts said.

Examples of 600-calorie meals include a tuna pasta salad and a small cereal bar, a chicken salad sandwich and a pack of crisps, or half a pepperoni pizza with a quarter of a garlic baguette and a banana.

A recent report by the World Health Organisation revealed that 28 per cent of British adults are obese, compared to a European average of 23 per cent.

The researchers, writing in the British Medical Journal, said the increasing habit of eating out at restaurants is playing a major role.

‘The energy content of a large number of main meals in major UK restaurant chains is excessive, and only a minority meet public health recommendations,’ they say.

‘Although the poor nutritional quality of fast-food meals has been well documented, the energy content of full-service restaurant meals in the UK tends to be higher and is a cause for concern.’

They said 39 per cent of people in Britain eat out at least once a week, up from 25 per cent a decade ago. ‘Several studies suggest that people who eat out of the home more often are at increased risk of weight gain and obesity,’ the researchers said.

‘Meals provided to consumers that are high in energy promote excess energy intake and are problematic for public health.’

Study leader Dr Eric Robinson said: ‘It’s clear what the industry needs to do – they need to act more responsibly and reduce the number of calories that they’re serving.’

‘Freedom of choice must remain key and it is reasonable for people to treat themselves when dining out, while still controlling their calorific intake,’ she said.

Her comments were reiterated by a spokesman for Hungry Horse, who pointed to its new Live Well range with dishes under 600 calories.

Dozens of gun lovers flock to Salt Lake City for a firearm rally
Beijing authorities hushed up the findings of a Chinese scientist
Medical chiefs are accused of pandering to assisted suicide lobbyists
Radio 4's Woman's Hour team given 'impartiality training' after rules broken in Brett Kavanaugh show
Passwords, usernames, and IP's of over 560,000 users exposed in a hack on a popular web comic forum
Ashram where the Beatles wrote the White Album and came to meditate lies overgrown
BAZ BAMIGBOYE: We'll never have Jane Bond, says Barbara Broccoli
Indonesia is set to face a measles epidemic after Muslim clerics declared its vaccine 'sinful'