A popular British beach will partially reopen to the public today – but only to those who have pre-booked tickets, as thousands of people head to the coast to enjoy temperatures of up to 81F (27C).

West Wittering beach in West Sussex is opening for the first time since being shut more than two months ago on March 21 after it faced huge crowds before the coronavirus lockdown was implemented days later.

A limited number of vehicles have now been allowed access to its car park, capped at 20 per cent of capacity. Tickets for the first three days up to this Friday have already been taken, with people booking through an app.

Britons have flocked to beaches and parks in recent days to make the most of the scorching weather after the lockdown was eased on May 13, meaning people could go out for unlimited exercise and meet other people.

In West Wittering, the beach management team said the move would help with social distancing and the safety of visitors. However, locals residents and other people who can get to the beach on foot are still allowed to do so.

A West Wittering Estate spokesman said: ‘It’s our utmost priority to protect the safety of visitors and our staff, so we’ve taken the necessary steps to introduce a responsible car park capacity and pre-pay entry only scheme.’

It comes as lifeguard chiefs called on the Government to restrict access to beaches during half term as the eased lockdown continues, with temperatures expected to stay very warm for the rest of this week. 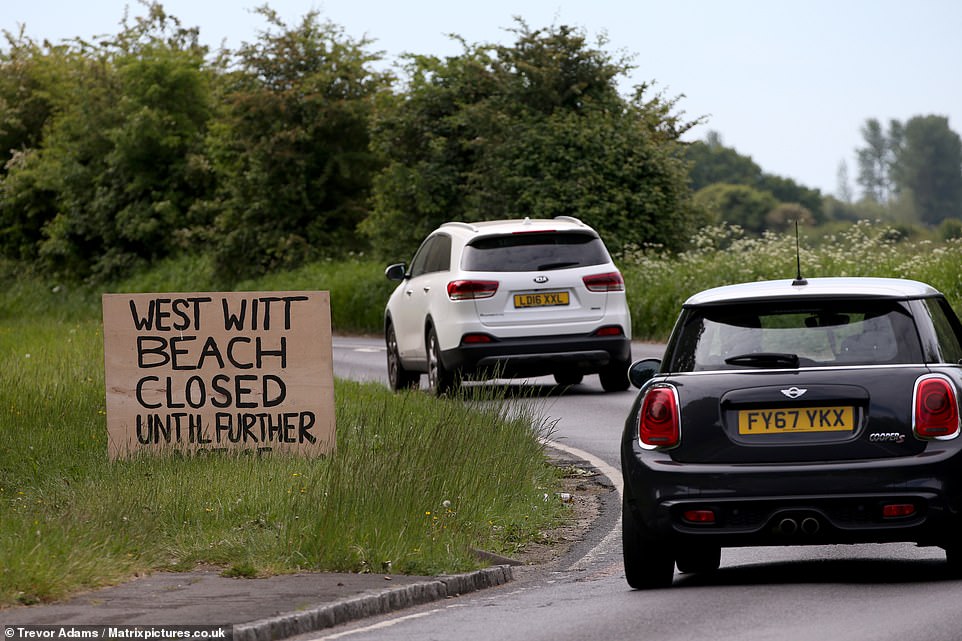 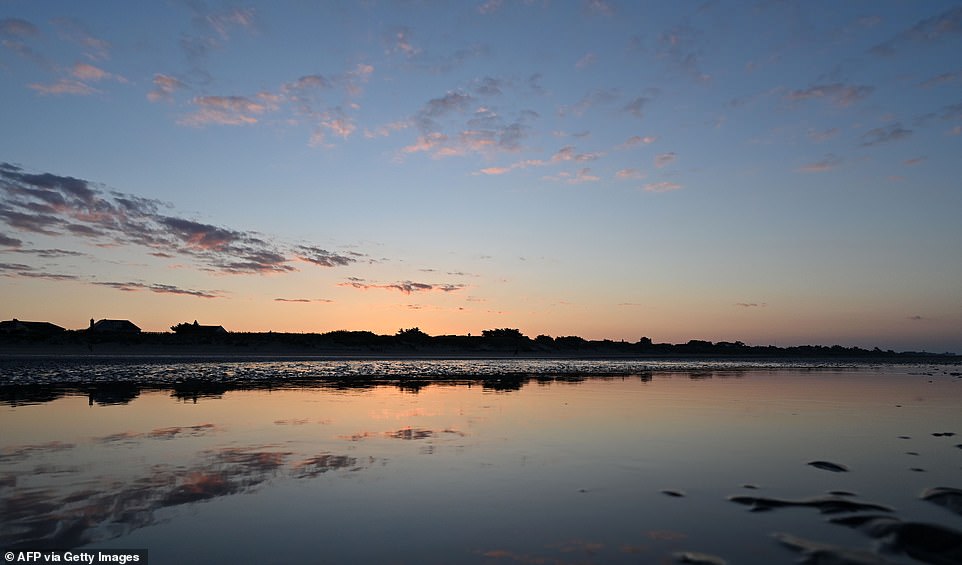 The sky brightens as the sunrise rises over West Wittering beach in West Sussex on April 26, which is now set to reopen 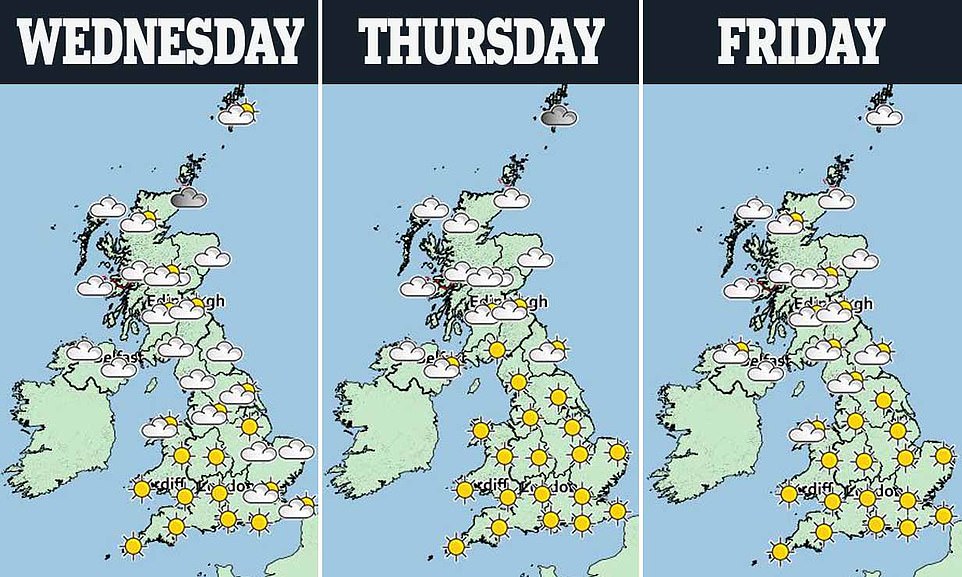 The warning followed the death of a teenage girl and a man when thousands flocked to unpatrolled spots on Monday to make the most of the scorching weather despite concerns over people not social distancing.

Mark Dowie, chief executive of the Royal National Lifeboat Institution, which normally runs lifeguard patrols at 240 beaches, made the comments in an open letter following the tragedies in Cornwall. 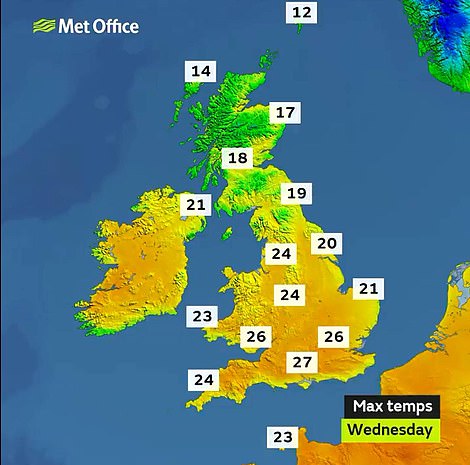 It comes as Britons are flocking to beaches and beauty spots across the country to enjoy the recent good weather, with highs in the South East expected to be between 72F (22C) and 81F (27C) for at least another fortnight.

The Met Office has also told of ‘warmer than average weather’ on the way through mid to late June, although this could be intespersed with showers or some longer spells of rain in some areas.

The RNLI suspended patrols because of coronavirus in March and has since announced plans to re-start them at 70 beaches this summer. But the current lack of cover has come in criticism after the deaths on Monday.

A 17-year-old girl died when an inflatable boat capsized on the Doom Bar, near Padstow – not an area that usually has lifeguard cover.

A man was pronounced dead after being pulled from the sea near Constantine by an off-duty RNLI lifeguard.

Mr Dowie defended the RNLI’s decision not to reinstate lifeguard patrols in time for the bank holiday weekend – blaming the Government for not giving ‘more advanced notice’ of easing lockdown restrictions.

Were daytrippers behind Covid-19 cases spike at hospital in seaside town which forced it to close?

A hospital was forced to close to new patients after coronavirus cases surged, with local residents concerned over high numbers of people enjoying a day at the nearby seaside.

Weston General in Weston-super-Mare, Somerset, shut its A&E unit and stopped all new admissions from 8am on Monday to ‘maintain staff and patient safety’.

Health bosses insisted it was only ‘precautionary’, and said yesterday that it had an ’emerging picture’ of staff with no symptoms testing positive for Covid-19.

University Hospitals Bristol and Weston NHS Foundation Trust said the closure was caused by a spike in cases during the past few days at the hospital, which serves 212,000 residents in north Somerset.

Town mayor Mark Canniford claimed it was possible that daytrippers who flocked to its beaches were behind the increase in cases, adding: ‘You can’t rule it out. We have been behind the curve on the virus, so we could just be catching up.’

Local Tory MP John Penrose said Weston General would remain closed to new patients while it had a deep clean.

He stressed that everyone at the RNLI was ‘very sad’ about the deaths, but added they had not been given enough time to co-ordinate new policies and training to protect staff and volunteers from coronavirus.

However, the RNLI was criticised for being too slow to act by Oliver Huntsman, of Bude Surf Life Saving Club – the oldest in the UK.

He insisted: ‘Paramedics did not stop for eight weeks to figure out how they could keep paramedics safe. They [RNLI] have had eight weeks with beaches being effectively closed to sort out a plan.’

Steve England, from surf magazine Curve, who was out surfing, said he and others gave CPR to the man who later died – and pulled him from the water while waiting for the coastguard helicopter and a lifeboat to arrive.

He said: ‘If we had a lifeguard on the beach we would have got oxygen to the casualty within two minutes but we had to wait 20 minutes.’

His magazine tweeted: ‘No RNLI lifeguard back up, no oxygen. Lots of ex-lifeguards to help but no equipment to save lives. CEO and bosses should resign. It is D-Day right around the coast. Lifeboat crews are disgusted with lack of leadership.’

Chris Lowry, a member of the Porthtowan surf lifesaving club, who helped in one of the rescues, said lifeguards want to get back to work.

He said: ‘The lifeguards are ready to go. The weather is lovely, the surf has been lethal.’

He said the lifeguards are fit and healthy and even if they contracted Covid-19 he said ‘the opinion of most of the lifeguards is that they would make a full recovery’. 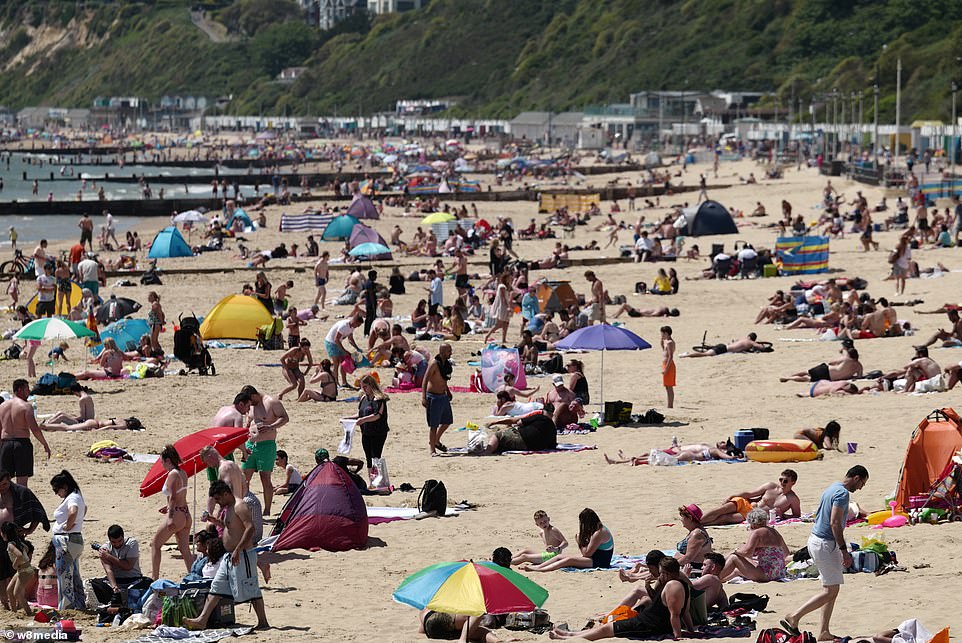 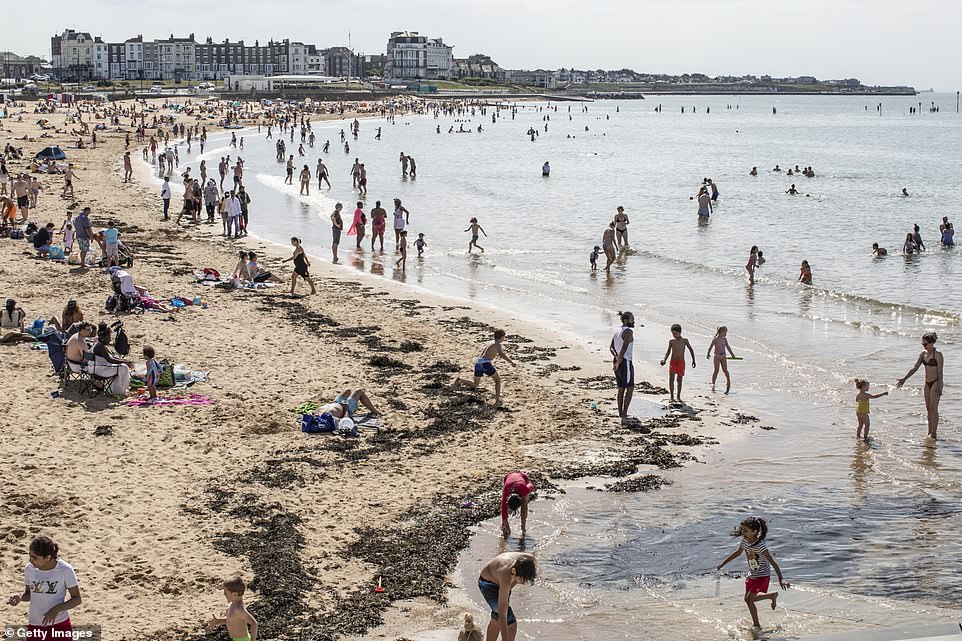 ‘we must choose between keeping the public or our lifeguards safe’: Full open letter by RNLI chief executive Mark Dowie

‘Despite our warnings that there were no lifeguards on patrol this weekend, crowded beaches, hot weather and big waves meant our lifeboat crews had their busiest weekend so far this year. At least two people lost their lives.

‘This puts the RNLI in an impossible situation. With thousands flocking to English beaches now lockdown restrictions have been eased, we must choose between keeping the public or our lifeguards safe.

‘Safety advice and warnings will only go so far when people are desperate to enjoy some freedom after weeks of lockdown. As a lifesaving charity, the RNLI cannot stop people going to beaches – but the government can – before more lives are lost around our coast this summer.

‘Rolling out a lifeguard service – especially in a pandemic – is not as simple as putting a lifeguard on a beach. We found out about the easing of lockdown restrictions in England at the same time and in the same way as the general public. Contrast that with shops, which were given three weeks’ notice and even car showrooms have been given 7-days warning to prepare.

‘We have to work out how to do in-water rescues and give first aid – normally conducted at close quarters and often with people coughing up water. We have to find PPE that will work on a beach and in the water – visors and aprons are no good on a rescue board. And we have to train our lifeguards in procedures to reduce the risk of infection. All this takes time and we learnt of the lifting of restrictions at the same time as everyone else.

‘Lifesaving is our priority. But the fundamental sustainability of the charity is also a consideration. Local authorities contribute just 20 per cent of the £20million needed to pay for a normal lifeguard season – the remaining £16million comes from RNLI donations. Right now, our charity faces an expected £45million shortfall in funding by the end of the year because many of our fundraising activities have had to stop.

He said the ‘mayhem’ was caused by ‘large swell, wicked rip currents, good weather, Bank Holiday and no RNLI – it was a recipe for disaster and sadly that’s what we got’.

It came after the RNLI water safety chief in the South West warned an absence of lifeguards combined with the incoming spring tide over the bank holiday weekend could be a ‘recipe for disaster’.

In his letter, Mr Dowie wrote: ‘Despite our warnings that there were no lifeguards on patrol this weekend, crowded beaches, hot weather and big waves meant our lifeboat crews had their busiest weekend so far this year. At least two people lost their lives.

‘This puts the RNLI in an impossible situation. With thousands flocking to English beaches now lockdown restrictions have been eased, we must choose between keeping the public or our lifeguards safe.

‘Safety advice and warnings will only go so far when people are desperate to enjoy some freedom after weeks of lockdown.

‘As a lifesaving charity, the RNLI cannot stop people going to beaches, but the Government can – before more lives are lost around our coast this summer.’

Mr Dowie said the RNLI found out about the easing of lockdown at the same time as the public and did not have time to prepare.

He explained the charity needed time to work out how to perform in-water rescues and give first aid in a way that protects staff from risk of infection.

It also had to find personal protective equipment that will work on a beach and in the water.

He added: ‘We’re asking for help to manage an impossible situation – we’re asking the public to heed our safety advice and we’re asking the Government to restrict access to the coast until we have lifeguard patrols back on beaches.

Speaking on BBC Radio Cornwall, Mr Dowie said there was a ‘chance’ the lives could have been saved if lifeguards had been on beaches as normal.

Asked why it had not been possible to reinstate lifeguards by the bank holiday weekend, he said: ‘If we had more advance notice of everything changing… we would have been able to do it. But we had no advance notice – we heard when you did.’

Cornwall councillor Pete Mitchell said: ‘I think they have really got to look at things very carefully and get back to the beaches as quickly as possible.’ 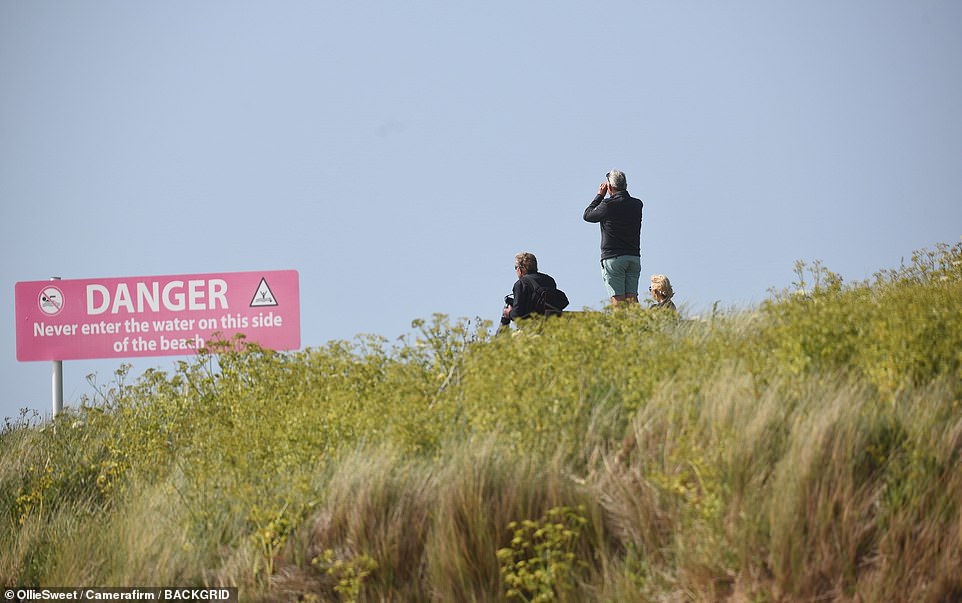 People at the coast near Padstow in Cornwall in Monday, on the day that a teenage girl and a man died in the water 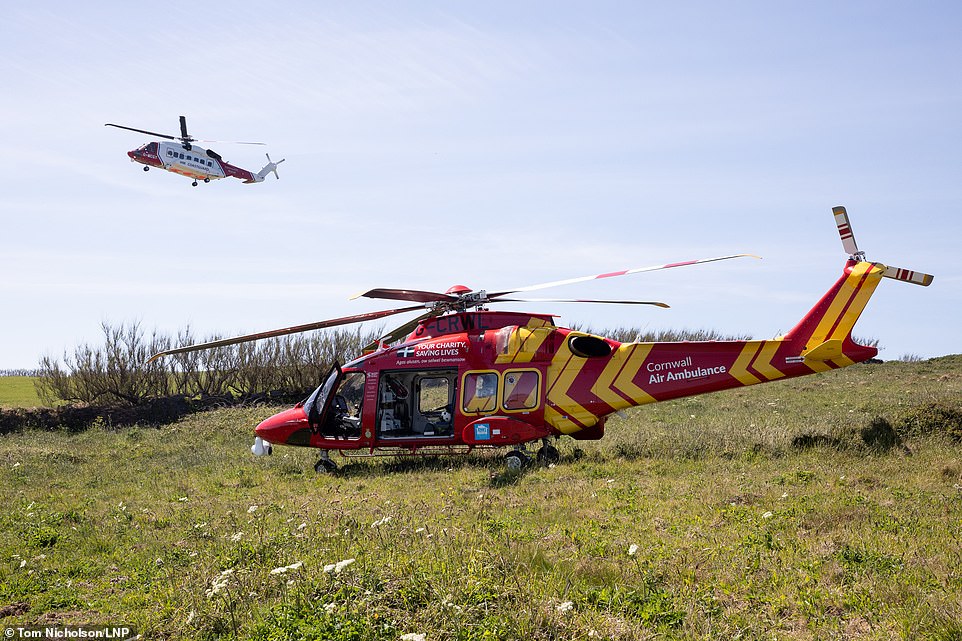 Meanwhile, figures released yesterday showed that high streets, seaside resorts and historic towns saw a surge in numbers over the bank holiday weekend as the lockdown melted away.

Footfall on high streets on Monday was up by 49 per cent compared to Easter Monday, according to analysts Springboard.

It was up by 62 per cent in coastal towns and 59 per cent in historic areas. The findings were similar on Saturday and Sunday.

Visits to ‘retail destinations’ on Monday were up 47.2 per cent in the South East compared to Easter Monday. Springboard said the increase was 35.5 per cent in Wales and 41.7 per cent in Scotland.

Man is seriously hurt after 'plunging from top floor of shopping centre'
Coronavirus UK: 'Work from home' advice to end in August
Children as young as eight are playing Love Island in school
England and Arsenal great Kenny Sansom fighting for his life after suffering serious head injury
Democrats battle Bernie over socialism at start of 2020 debate
Kylie Jenner and Travis Scott 'SPLIT': Couple are 'taking a break' as they agree to 50/50 custody
EU claims Theresa May is on track for Brexit deal by end of year
Top five greatest controversies of Winston Churchill