Yesterday morning could not have got off to a more harrowing start as Michelle Fay arrived to take over from the night shift.

Not only had two more residents died in the early hours, but one was a particular favourite.

‘She was ‘Our Mary’,’ says Michelle softly.

‘We’ve known her for years — her children and her grandchildren, too. She’s like family. I just wanted to cry. I feel like I’ve been crying for a week.’

But there was no time to cry. Here at the Oak Springs home for the elderly in Liverpool, there is no time to do anything these days except keep the remaining 64 residents fed, watered, bathed and monitored while maintaining some veneer of normality. 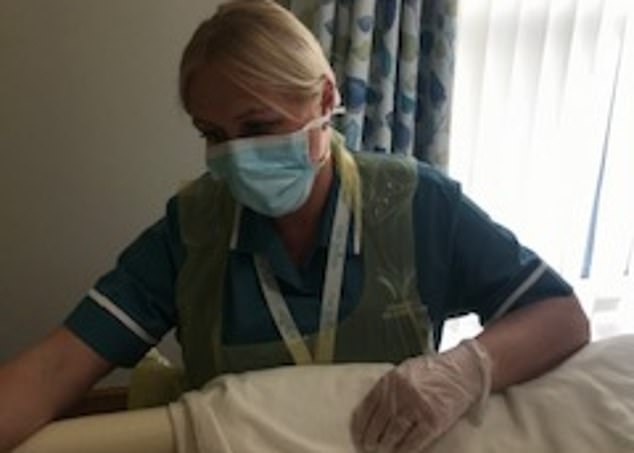 Michelle Hardman is pictured caring at Oak Springs in Liverpool, Merseyside, where residents have died amid the pandemic 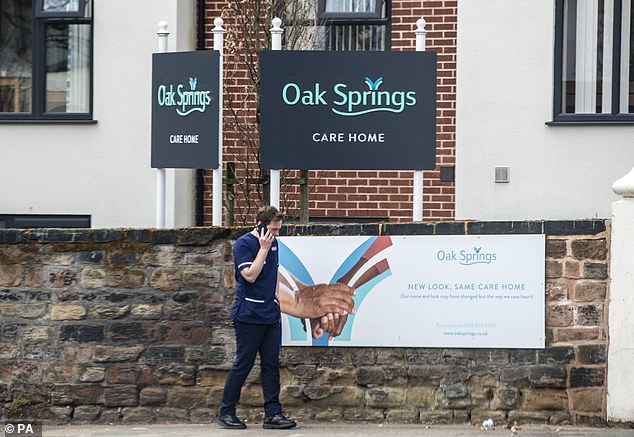 A member of staff outside The Oak Springs care home in Wavertree, Liverpool, which was operating with a quarter of its usual staff numbers due to Covid-19 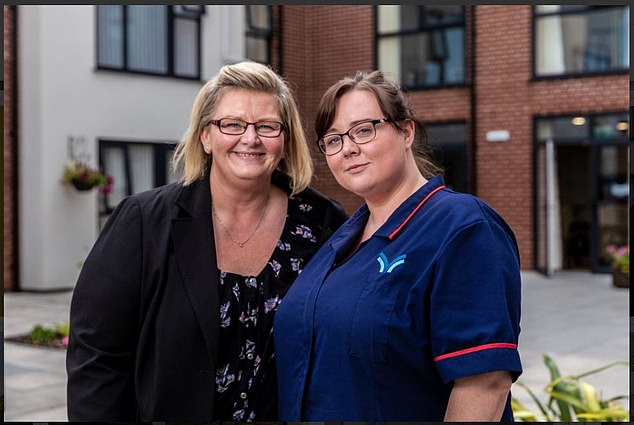 Manager Andrea Lyons (left) said: ‘As fast as you turn around, someone else is displaying symptoms’ Pictured, right, Amanda Pettitt 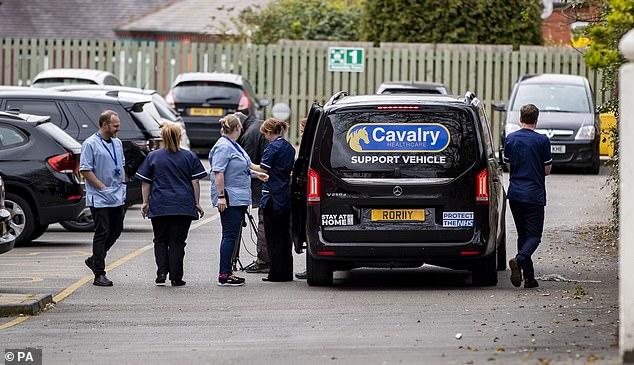 Replacement staff arrive outside The Oak Springs care home in Wavertree, Liverpool, which was operating with a quarter of its usual staff numbers 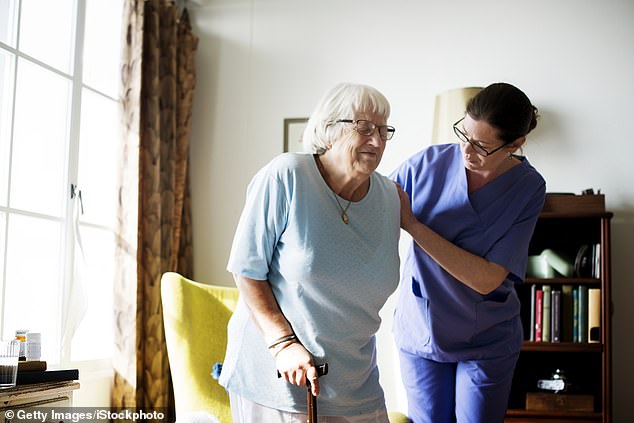 On a normal day, there would be between 68 and 72 care staff on duty at Oak Springs now there are 18 as most of the staff are now in self-isolation due to the coronavirus

And that is a Herculean task right now. For Oak Springs is enduring a virulent outbreak of Covid-19 that has stretched this highly rated care home to the limits.

As of last night, six residents have died, two are in intensive care and two-thirds of the remainder are ill and showing symptoms of the virus.

At the same time, most of the staff are now in self-isolation.

On a normal day, there would be between 68 and 72 care staff on duty here.

Yesterday, there were just 18, including a fresh batch of emergency agency workers following a plea for help through the Press.

On top of doing the work of four people, the team must also field a stream of calls from relatives who are, understandably, worried sick about their loved ones.

Such is life on the other ‘frontline’ of the coronavirus crisis — Britain’s care homes. Across the UK, there are now 11,300 of them with more than 400,000 residents, all in acute danger from a pathogen which singles out the elderly and infirm.

And there are few places more susceptible to contagion than the handrails, door handles, bedsteads, bathrooms and dining rooms of an old people’s home.

And Oak Springs is among the first wave to be hit. I can’t go inside, of course, and can only communicate online with the heroic skeleton crew within.

Even looking on remotely, it is a heartbreaking scene which leaves me desperately sorry for all concerned — but also profoundly touched by the determination of these staff to offer what comfort they can to some of the most vulnerable, scared and unavoidably lonely people in our society.

In happier times, Michelle’s job is that of community co-ordinator, organising day trips and generally making a fuss of all the residents. Now, she is mucking in with everything — serving meals, feeding those who cannot feed themselves and helping with trips to the bathroom.

I also meet Matt Hayward, 30, the lead carer in the dementia unit.

‘I’ve never seen so many people get so poorly so quickly,’ he tells me. ‘And I do worry about my team. But as long as they are well, they will keep going and I have to say they have been fabulous.’

Today, the primary concern of the nation is, quite rightly, for the poor bloody infantry of the NHS. However, let us not forget those fighting a similar battle with equal dedication but none of the same firepower. 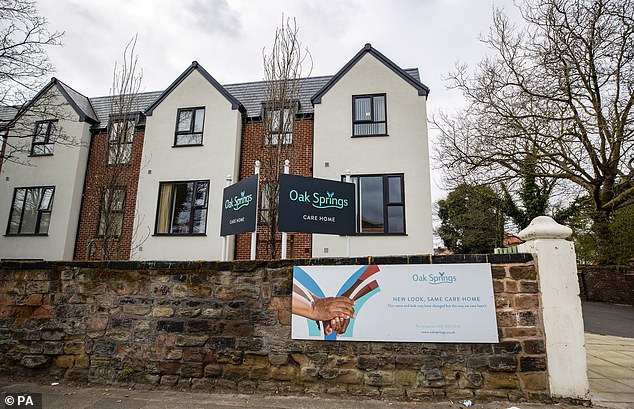 The Oak Springs care home in Wavertree, Liverpool, which is operating with a quarter of its usual staff numbers due to Covid-19, according to Labour MP Paula Barker

Care home staff don’t qualify for the tests which are so urgently needed if we are going to get a grip on this disease — because testing is currently limited to hospitals and a small number of NHS staff.

These homes must source all their own protective equipment.

Many of the staff are working the same long hours as NHS staff — and, in the process, freeing up bedspace for our hospitals — but they don’t qualify for those special NHS supermarket shopping sessions or discounts.

The nation does not give them a round of applause. And who can blame them if they feel like the forgotten army?

For, to my surprise, it transpires that no doctor has set foot inside Oak Springs since the coronavirus first came through the door more than a fortnight back.

Two splendid community nurses have made umpteen house calls. But despite numerous calls, six deaths and dozens of seriously ill patients, all requests for a GP have, thus far, been refused.

It was on March 17 that a member of staff began to show the first symptoms of the virus and went home to isolate.

It was only when a third resident grew so sick that he was taken to hospital and tested that the presence of Covid-19 was confirmed.

‘We’d prepared but we never expected anything like this,’ says Andrea, 49. Just three years old, with the latest in high-tech, ensuite accommodation, Oak Springs is spread across three floors — known as the Willow, Maple and Walnut suites.

Willow, on the upper floor, looks after those with early onset dementia. They were the first to go down.

A few days later, the virus had spread to Walnut on the ground floor, home to those needing general care.

That was sealed off, too.

It was only a matter of time before the bug reached Maple, home to those with the most severe dementia.

‘It’s the most difficult place for barrier nursing because you can’t even leave hand sanitiser there in case they drink it,’ says Andrea.

She points out that the staff shortages hit hardest there, too, because these are patients who depend on familiar faces and voices.

‘They don’t know what’s going on but they can be very distressed by changes in their routine.’

And everything has been turned upside down.

The social areas are shut.

The dining rooms are closed.

Everyone must stay isolated in their rooms while the staff do their best to spread the care.

However, these residents are fortunate in one regard. They could hardly ask for a more devoted team of carers.

‘We try to maintain as much contact as possible because it is something that relatives cannot do themselves,’ says Andrea.

She can allow one visitor per resident, providing that the visitor is fit and well and promises to self-isolate for 14 days.

Inevitably, some people end up passing away without a family member at their side.

‘We had one resident who was very sick and her daughter was in a high-risk category herself,’ says Andrea.

‘The lady was unconscious but we made sure someone was there all the time, playing her favourite songs, holding her hand until the end. It was a great reassurance to her daughter that her mother did not die alone.’

Andrea has 23 years’ experience in NHS ­hospitals — working her way up from auxiliary nurse to A&E manager — to fall back on.

She started making provisional plans at the first reports of a nasty new virus breaking out of China.

‘People thought I was mad six weeks back when I started putting in fresh orders,’ she explains.

‘I must have spent £13,000 on extra protective kit, including 5,000 masks. The chef thought I’d lost it when I said we needed to order double the food. I even got laminated signs printed.’

Even so, she never imagined a crisis of this severity with so few staff.

Monday morning was her lowest point to date, arriving to deal with two more deaths only to find herself minus another ten employees.

At present, she is grabbing four hours’ sleep a night.

She worries, too, about bringing germs home to her husband who is himself in a high-risk category with type 1 diabetes.

‘I just get home and start crying because you can’t do it at work in front of the staff,’ she says.

‘But we have a duty of care and we cannot let our residents down. Some of them are war veterans. They did their duty.’

Before she has to get back to her rounds, I ask her what she needs above all else.

After a pause, she says: ‘We need uniforms. Our supplier is now giving everything to the NHS and we are running out.’

Then, mustering a smile, she adds: ‘And we never say no to cake.’