A gang of ruthless Romanian burglars flew to Britain to raid up to 500 homes in an operation that police believe netted millions of pounds.

The crooks, including a husband and wife, stole cash, jewellery and watches which they smuggled back to their homeland on budget flights.

Yesterday five of them were jailed for between four and eight years after a court heard how their four-year crime spree caused ‘untold misery’ to many victims.

The gang are believed to have hatched their plot in 2014. They made dozens of trips – usually in winter to take advantage of the darker evenings – to burgle well-to-do homes across four counties in the Midlands.

One piece of evidence that led to their downfall was the discovery of footprints left by a man wearing size 5 trainers. DNA evidence was also found at crime scenes.

Birmingham Crown Court was told that they were linked to at least 76 break-ins but detectives said they believe their wider gang was responsible for many more.

The ease with which they flew in and out of Britain prompted one victim to ask yesterday: ‘Why weren’t they stopped sooner?’

According to detectives, Catalin Zaharia was the ringleader. His wife Florina Spiru managed the gang and recruited other Romanians to join their team. 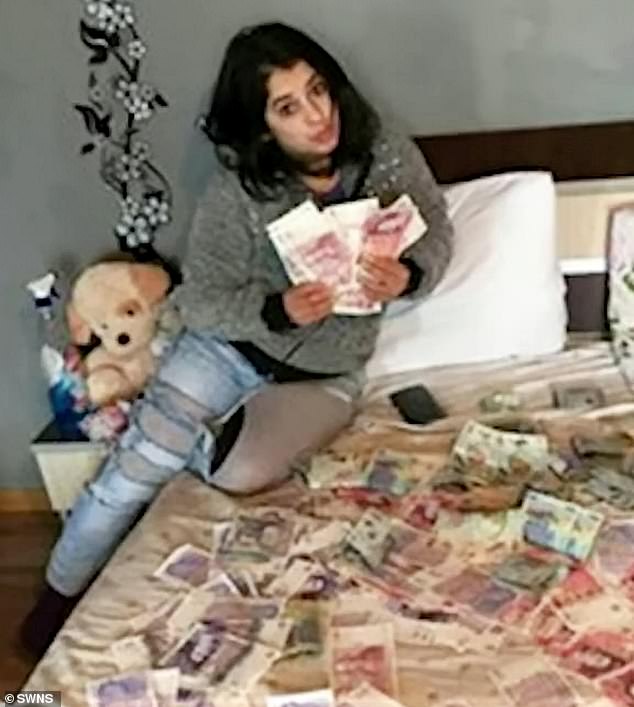 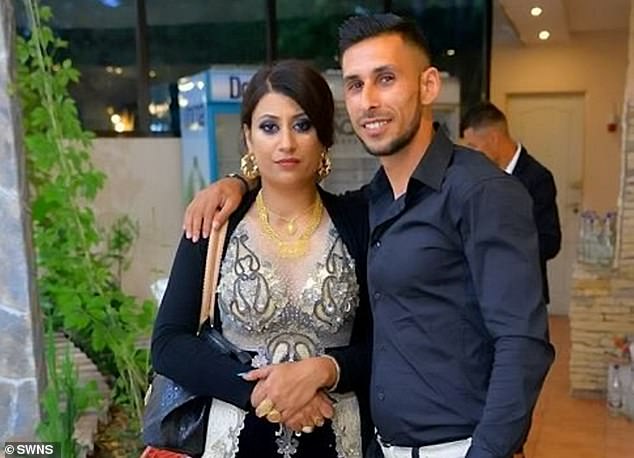 Zaharia, 30, who has convictions for theft and burglary in France, Spain and Romania, was described as being at the ‘head of the pyramid’ and was responsible for running operations in this country.

Spiru, 28, a mother of two, did not herself take part in the burglaries but acted as group ‘administrator’ and helped launder the proceeds of their crimes, selling gold and jewellery and transferring money abroad.

Spiru claimed she was forced to take part by her husband. However, detectives said she had an ‘instrumental’ role and made at least ten trips to Romania carrying bags of jewellery.

The profit from the burglaries was ‘very swiftly making its way out of the country’ and into the ‘pockets of those who were higher up the chain’, the court was told.

The Romanians took advantage of EU freedom of movement rules to make regular trips to and from Romania using Luton and Birmingham airports.

Zaharia made at least 30 trips over three years and was caught on CCTV on one occasion with his wife at Luton airport. Spiru also left the country with bags of jewellery on a ferry from Dover to Calais.

Dozens of cash transfers – often thousands of pounds at a time – were also made via MoneyGram to accounts linked to friends and family members in Romania, as well as to accounts in India and Spain.

Prosecutor Graham Russell told the court it was an ‘organised conspiracy to burgle with an international dimension – the guiding minds were in Romania’.

Jurors heard that a mystery figure called ‘The Boss’ was directing the gang from Romania. Zaharia and his wife were in contact with him by text message – and he complained about the quality of the jewellery they sent him.

At least two other members of the gang fled the UK before they could be arrested.

RAIDS IN THE NIGHT

The men worked in pairs. Under the cover of darkness, they targeted addresses with the lights off which appeared unoccupied. 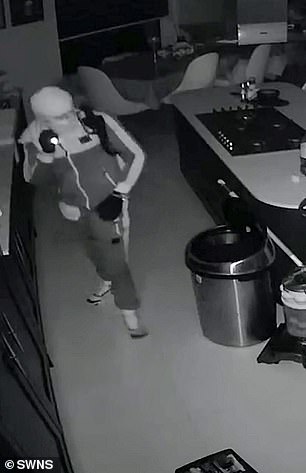 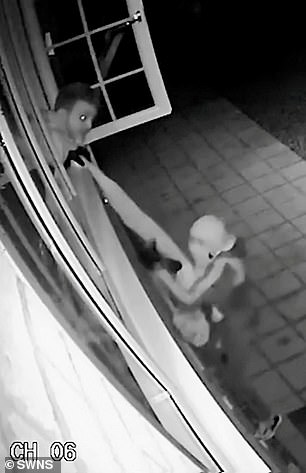 They carried out most of their break-ins after the clocks went back for winter. They wore hoods and scarves to cover their faces, and builders’ gloves. They typically broke into homes through insecure first floor windows – to avoid alarm sensors on the ground floor – after climbing on top of outbuildings and conservatories.

They carefully selected their targets – looking for victims they believed were of ‘high net worth’ and breaking in while the occupiers were out or on holiday.

The gang even took jewellery testing kits with them to test the purity of gold items at the scene.

On one occasion Zaharia was seen shimmying out of a window on bed sheets which had been tied together – then using the sheets to lower a safe to the ground.

Detectives who raided the home of Zaharia and Spiru in Oldbury, West Midlands, found a ‘veritable Aladdin’s cave’ of stolen goods including Krugerrand gold coins and Breitling watches. Bracelets and pendants were found in a pink Adidas handbag while more jewellery had been hidden in socks, bedroom drawers – and even stashed in a disused freezer in the garden. 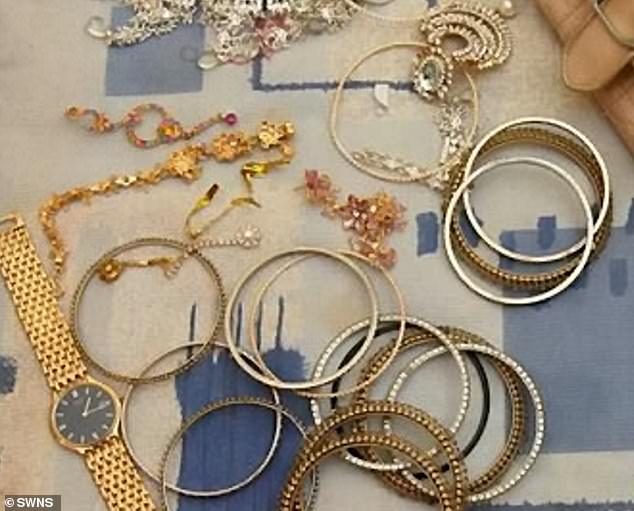 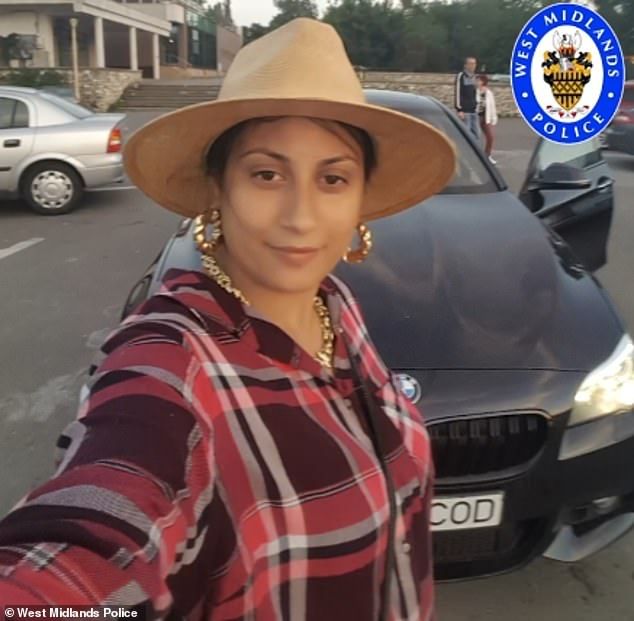 Spiru shared pictures online of her surrounded by cash and with BMW M3 Sport, pictured

Wads of cash in various currencies were found, including more than £16,000 inside a Dior handbag belonging to Spiru.

Burglary equipment was recovered, including several pairs of rubber grip gloves, tools and weighing scales along with the gold quality testing device. Stolen goods from five break-ins were found at the semi and returned to the owners. However, much of the gang’s haul has never been recovered.

Police also found photos showing the couple’s friends and family in Romania posing in expensive jewellery taken from homes in the UK.

Other pictures show Zaharia and Spiru posing wearing stolen jewellery and in front of a BMW M3, and Spiru sprawled on a bed covered in banknotes.

Rebecca Constantin told how her family’s life had ‘changed for ever’ after their home in Birmingham was burgled in November.

The gang climbed on a flat roof, smashed a first floor window, ransacked the house and stole jewellery and Christmas presents for her children worth a total of £10,000. In a statement read to the court, she said: ‘My 11-year-old keeps looking out of the window… he does not like leaving the house unattended. 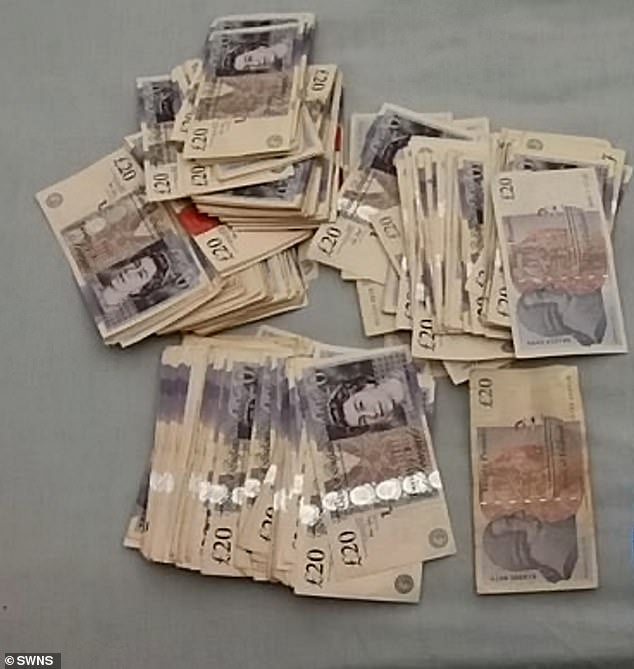 The overall estimated value of goods taken from the ‘sophisticated international conspiracy’ stands at £781,954 with an additional £63,840 in cash (some of which is shown)

‘I have to sleep with my eight-year-old daughter. My children are my world, their homes should have been their safe haven.’ The gang targeted homes across West Midlands, West Mercia, Staffordshire and Gloucestershire.

Sergeant Sandy Thompson, from West Midlands Police, said: ‘This group have been responsible for untold heartache, worry and inconvenience among hundreds of residents across the region.

‘We’ve linked them directly to 100 burglaries where £65,000 and property valued at £800,000 was taken – but we suspect they’ve committed far more offences and taken cash and valuables worth millions of pounds. Four or five hundred [burglaries] is a conservative estimate.’

A pair of small, distinctive Nike trainers helped police identify the gang. Footprint impressions from the shoes – believed to be a size 5 – were found on roofs of outbuildings and conservatories at several homes that had been burgled. 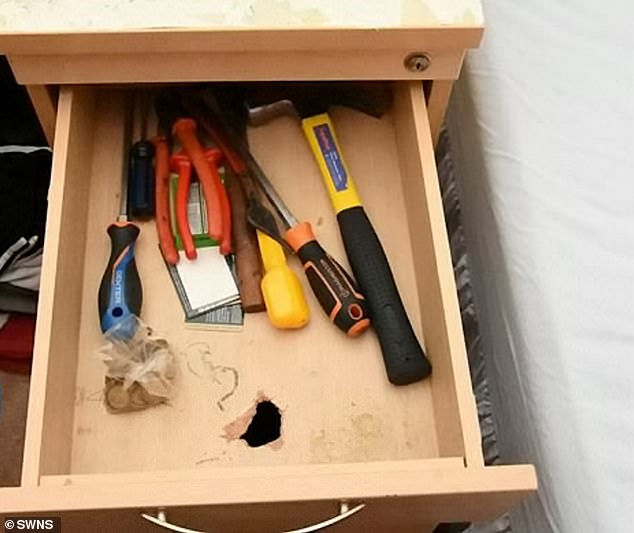 Police found tools, pictured, in a bedside table when they searched the burglar’s home

A man wearing the same unusual shoes was caught on CCTV several times. Zaharia admitted wearing the trainers but said others also wore them, meaning that although police could not link the break-ins directly to him they could link them his wider gang.

He had been arrested in September last year, when traffic officers noticed an uninsured car on the M6. They followed it off the motorway and watched as the passenger threw a bag from the window. It was found to contain jewellery stolen from a home in Solihull. Zaharia, who was driving the vehicle, was arrested for a driving offence and his DNA taken.

He was released and returned to Romania. But in December police raided his home and he was arrested again along with his wife and three men – Constantin Stoian, 30, Marian Molocia, 27, and Daniel Stoean, 35.

Detectives were able to link the hapless Molocia, Stoean and Stoian to 13 offences by blood or fingerprints left at the scene of burglaries, the court heard.

Molocia had dropped a sock bearing his DNA at the scene of one break-in. At another, he dropped a screwdriver when he was scared by two dogs.

BEHIND BARS AT LAST

Spiru denied money laundering but was found guilty following a trial. She put her head in her hands and cried yesterday as she was jailed for four-and-a-half years.

Judge Murray Creed dismissed her claims that she did not know what was going on. 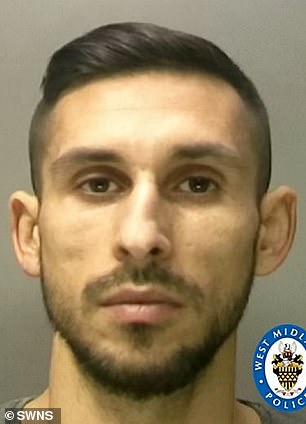 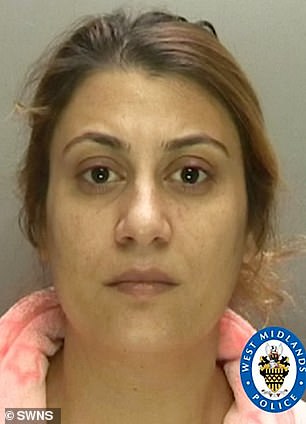 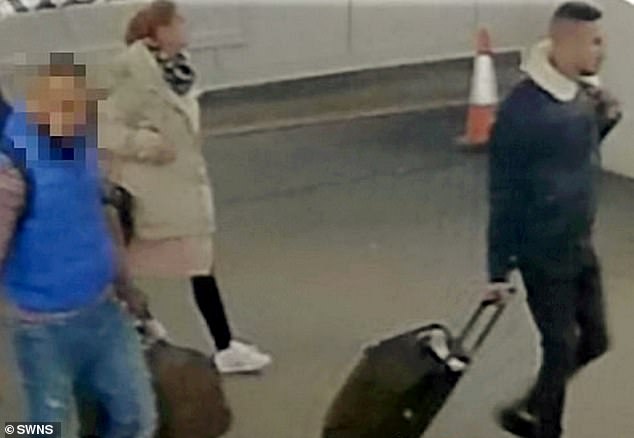 ‘I am quite satisfied that you played a leading role,’ he said. ‘This was sophisticated – it involved the weighing of gold and the use of testing equipment. You made trips with jewellery secreted in bags and electronic transfers out of this jurisdiction.’

Molocia, who admitted taking part in ten burglaries, including one where property worth £45,000 was taken, was jailed for six years and four months.

Zaharia, who admitted being involved in eight, was jailed for eight years. They had all pleaded guilty to conspiracy to burgle.

Judge Creed said: ‘The lifestyle that you, Zaharia, and your partner Spiru followed could be seen in the pictures on Instagram and elsewhere – the shoes filled with money in somebody’s bedroom.’

The judge said the five could be deported once they have served their prison terms but it was up to ‘other agencies’ to decide.

Sergeant Thompson said afterwards: ‘They were ruthlessly organised. We suspect other people from Romania were also involved in the plot and we are working with the Romania authorities in a bid to bring others to justice.’

CCTV has revealed how burglars, who are thought to have stolen millions of pounds worth of goods, broke into luxury homes and shipped the profits to Eastern Europe.

The gang of Romanian burglars who took at least £800,000 in a string of raids across the West Midlands have today been jailed for a total of 27 years.

A court heard they took advantage of the dark British winter nights to raid homes for jewellery and other valuables such as designer watches over a three-year period.

In total, they targeted at least 76 posh residential homes across the West Midlands, West Mercia, Staffordshire and Gloucestershire from 2015 to December 10.

However Sgt Sandy Thompson said police suspect the gang have committed many more offences ‘and taken cash and valuables worth millions of pounds’ adding that Four or five hundred [targeted homes] is a conservative estimate.’

THEY STOLE THE CASH FOR OUR GRANDCHILDREN’S CHRISTMAS GIFTS

David and Norma Richardson popped out for 25 minutes to buy a Christmas tree. But that was enough time for the Romanian gang to climb a fence, scale a small roof and smash a window into the master bedroom.

They ransacked the room, stealing jewellery and £700 in cash that the retired couple had saved for Christmas for their five grandchildren. 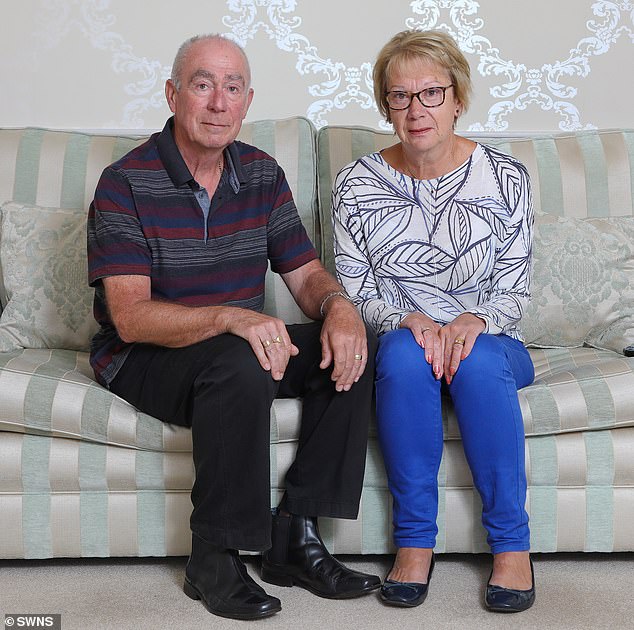 David and Norma Richardson, from Sutton Coldfield, lost hundreds of pounds to the gang

Mr Richardson, 68, and his wife, 67, did not realise they had been burgled until they went upstairs 30 minutes after arriving home – and believe the gang were in the house when they returned.

Mr Richardson said: ‘There was glass on the floor, empty jewellery boxes on the bed and two drawers had been rifled through. There was a footprint on a chair. But they weren’t untidy. They clearly knew what they were doing and what they wanted.’

Mrs Richardson, a former medical secretary, said: ‘A pearl necklace was still on the bed and they left three credit cards behind.

‘That’s when we realised that we disturbed them. It’s just that thought, that someone, a stranger, has been in your bedroom. It was horrible.’

The couple believe the gang were scouring their estate, on the outskirts of Sutton Coldfield, West Midlands, and saw them go out. None of the stolen items has been recovered.

Mr Richardson, who worked for West Midlands Police as a chartered surveyor, said he was angry to learn that the gang had been operating for four years without coming to the attention of airport and immigration authorities. ‘They were flying in and out on a regular basis,’ he said. ‘It was a very well-organised production line. Why did no one pick it up?’

The couple were in court to see them jailed yesterday. Mrs Richardson said: ‘I wanted to see their faces.’