Councils have been accused of ‘street cleansing’ after offering thousands of rough sleepers one-way tickets out of towns and cities.

A Guardian investigation found that some 6,810 travel tickets, including trains, flights and bus, have been purchased across 83 councils in England and Wales since 2015.

Councils defended the ‘reconnection policies’ that aim to link the person with family in an another area, accepted on a voluntary basis – but the paper found that some people were offered transport to unfamiliar areas they’d never been and felt they had no choice in the matter. 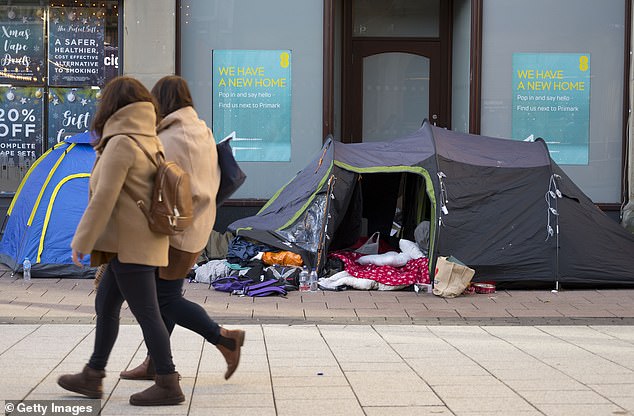 The investigation, based on figures acquired through freedom of information requests, suggests that the methods merely moves homelessness to different areas, rather than solving it.

The reconnection policies are supposed to offer a move based on a link to another area in the form of family or solid accommodation there.

Philip Sempers, 35, told The Guardian that when he was homeless two years ago he was offered a one-way train ticket to Birmingham, his only option.

‘I split up with my ex and was sofa surfing for a few months … I got to the end of my tether … the council said: ‘The only thing we can do is give you a train ticket to go to Birmingham so you can stay in a hostel there,’ he told the paper. 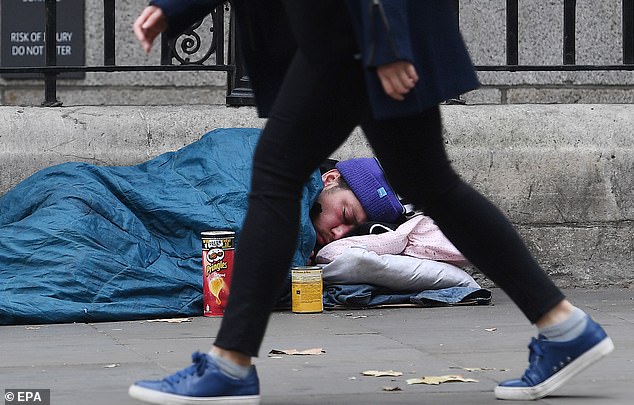 A pedestrian walks by a rough sleeper in London, where 4,159 tickets were purchased

‘They said there was no accommodation for me in the whole of the county I was in, in south-eastern England. There was nowhere for me to go. They tried looking for hours and hours and said the only thing on offer was a train ticket to get me to Birmingham. I said: ‘I just need somewhere to live. This is supposed to be a first-world country.’

He added that he felt ‘lost’ in England’s second city, having never been in his life.

The Homelessness Reduction Act, new as of April, suggests that if a council is going to move someone it must do so to an area where said person has connections.

Before the implementation of the act, local authorities were only required to help homeless people with local ties.

The report also suggested that people from Eastern Europe are often offered flights with no return, with one homeless Hungarian interviewee telling The Guardian that ‘they send you back to nothing.’

It has been dubbed ‘street cleansing’ by rough sleepers in Bournemouth according to Claire Matthews who runs a soup kitchen in the reconnection hot spot. It has seen 119 in three years.

Oxford city council said its ‘reconnections’ were aways done with full cooperation from them and the party concerned, adding that ‘there was a ‘legitimate and verifiable offer of a bed and support’.’