A picture has emerged showing Ryanair cabin crew lying on an airport office floor after becoming stranded by bad weather.

The image was staged by six crew members in protest at their treatment at Malaga Airport in Spain in the early hours of Sunday morning.

They were part of a group of eight pilots and 16 cabin crew based in Portugal who claim they were forced to spend several hours in the room, which had just eight chairs. They had no access to food or drink and no hotel accommodation was arranged. 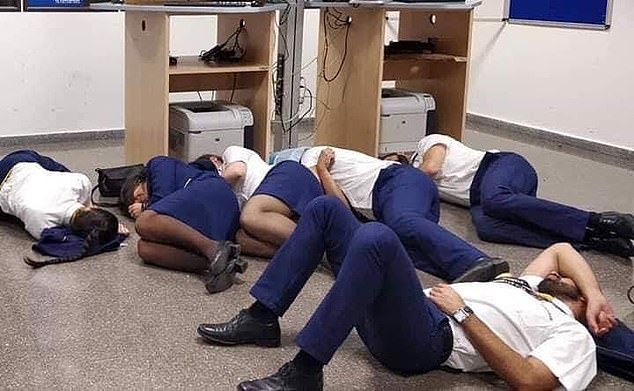 They had landed just after midnight, having been diverted from various departure points because of Hurricane Leslie.

The office they gathered in was one of the few rooms that wasn’t locked.

They were discovered around 6am by crews based in Malaga, who arranged for a VIP lounge to be opened up for them.

Fernando Rikote, a Malaga-based delegate for SITCPLA, the Spanish union for airline employees, said that Ryanair European Operations in Dublin was told about the plight of the crews by one of the captains, but lodgings couldn’t be found.

The duty manager of Lesma, the company which is under contract at Malaga for ground handling of Ryanair operations, tried to find a hotel but was unsuccessful.

Mr Rikote said: ‘In the end, they were informed it was impossible to find any hotels. Friday was a bank holiday in Spain and the duty manager said all hotels were full.’

He continued: ‘Finally, at 11.30, the crews flew back to Porto on a 737 ferry flight. Without having proper rest, without sleeping at all.’

They had to wait aboard that aircraft for nearly three hours while a captain was flown in from London to operate the flight. A Malaga-based first officer operated the flight as well, according to Mr Rikote.

Ryanair’s chief operations officer, Peter Bellew, took to Twitter to explain that the airline was unable to find accommodation in Malaga for the crew

He claims that when the crew asked the operating captain if they could open the aircraft bar and heat up some sandwiches and have some soft drinks, he reportedly called the operation room in Dublin for permission but was told ‘no, they can’t’.

Mr Rikote added: ‘Maybe all hotels around Málaga airport and the city were full, but for sure it would have been possible to accommodate these crews in different hotels, even ones far away from the airport. And to provide a taxi service for all of them. From SITCPLA we certainly believe that this disrespectful situation towards the crew could have been avoided.’

Ryanair’s chief operations officer, Peter Bellew, took to Twitter to explain that the airline was unable to find accommodation in Malaga for the crew. 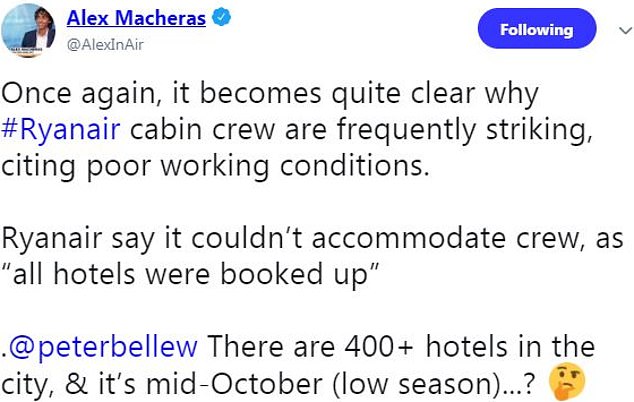 He said: ‘Later after this the crew moved to VIP lounge. Apologies to the crew we could not find accommodation.’

The picture first appeared on Sunday night on a Facebook page called Ryanair MUST Change.

After aviation expert Alex Macheras saw it he tweeted: ‘Once again, it becomes quite clear why #Ryanair cabin crew are frequently striking, citing poor working conditions.

‘Ryanair says it couldn’t accommodate crew, as “all hotels were booked up”.

Flight attendant Jay Robert, who blogs about his travels under the name Fly Guy, told MailOnline Travel that the crew deserved better.

He said: ‘Ryanair crew are some of the hardest working cabin crew in the airline industry and deserve more than a cold floor to sleep on.’ 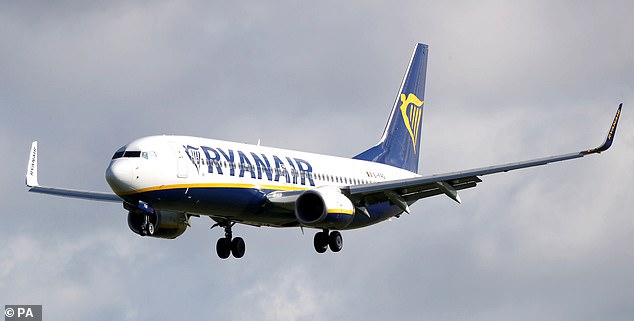 Ryanair said in a statement: ‘This picture is clearly staged and no crew “slept on the floor”. Due to storms in Porto (13 October) a number of flights diverted to Malaga and as this was a Spanish national holiday, hotels were fully booked. The crew spent a short period of time in the crew room before being moved to a VIP lounge, and returned to Porto the next day (none of the crew operated flights).’

Portuguese Ryanair crew along with their counterparts from six other countries took part in a 24-hour strike last month in a long-running dispute over pay and conditions.

Last week Portugal’s SNPVAC union unveiled proposals that would see Ryanair staff be given employment contracts based on Portuguese law, rather than Irish law.

That cake was simply smashing! Is a 'cake smash' a sweet treat for babies or a daft indulgence?
Evacuation flight carrying 32 British and European tourists lands in UK
Bride accused of 'maths-shaming' for asking guest to complete a test
EVE SIMMONS: Spare us from the smug mums like Kate who say breast is the ONLY way
Excited Melbourne Cup punters let their hair down as festivities get into full swing
Body of 31-year-old man is discovered in middle of road following carnival
Labour leader writes to rebel Tory MPs offering to fight for new referendum if made Prime Minister
Tamara Ecclestone puts her Christmas decorations up SIX WEEKS early