A sailor who died in one of the greatest tragedies of WWII has spoken again 67 years later after recordings of his voice emerged on eBay.

Robert Terence Grogan was one of 1,415 killed when the HMS Hood was sunk by Nazi warship the Bismarck during the Battle of the Denmark Strait in 1941.

Commander Grogan, a Royal Navy sailor, used to record his voice onto vinyl using specialist equipment and mail it back to his family in the UK. 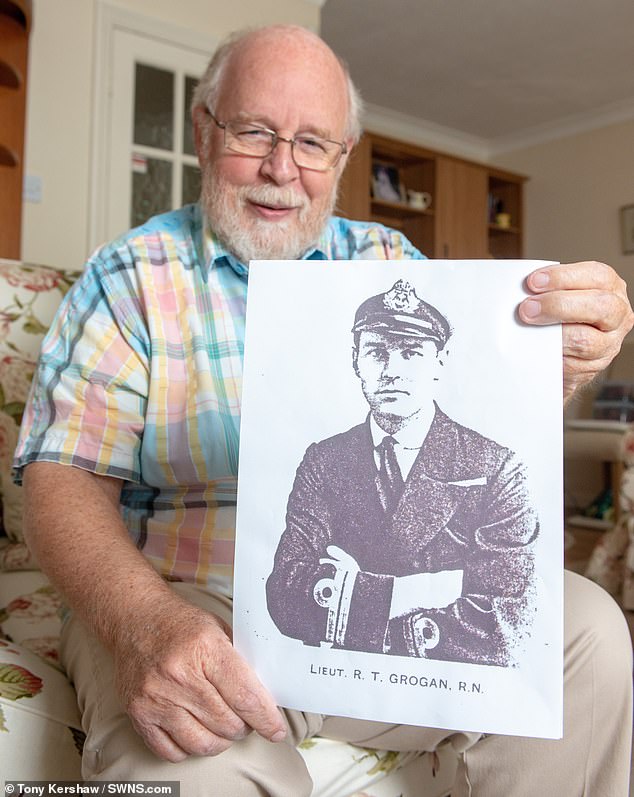 But the recordings, which were played in the home of his nephew Peter Jefferson even after his death, were lost over time.

It was only when a historian found the rare pressings on sale for £20 on eBay that Mr Jefferson, 73, was able to hear his uncle’s messages again.

He made an emotional visit to the National Museum of the Royal Navy where the vinyl is now being archived.

Mr Jefferson, a former radio announcer for BBC Radio Four, said: ‘I found them lurking around the house when I was aged 10 or 11.

‘I bought a wind up HMV gramophone and listened to them. 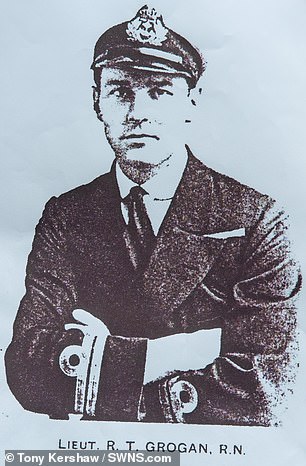 ‘I had to ask my grandmother about them and she said they were recordings that Terry had made before the war. He was my uncle, my mother’s half brother.

‘He was all over the place, India, the Middle East – wherever the ship was at the time. They were recorded over a number of years.

‘Where we would send an email, people at that time would write letters but he didn’t – he recorded his letters.

‘It was all before the war, he couldn’t have made it through the war because he would have been thrown in the irons I should have thought, for treason.

‘It was his diary really.’

Commander Grogan, known as Terry, served on many ships during his naval career, including HMS Emerald between 1934 and 1936, where several of his recordings were made.

But over the years the records became lost, with most of them thrown out by Mr Jefferson’s mother Lisa Wells, 91.

The sailor’s nephew, from Weybridge in Surrey, was contacted by the historian who found the tapes earlier this month after he mentioned his uncle during a radio interview.

Dr Harry Bennett, an associate professor of History at Plymouth University, said: ‘If Peter hadn’t been so interested in his uncle I wouldn’t have found him.

‘I bought them on eBay for £20. They were listed as some recordings on HMS Emerald and I thought I would take a punt. 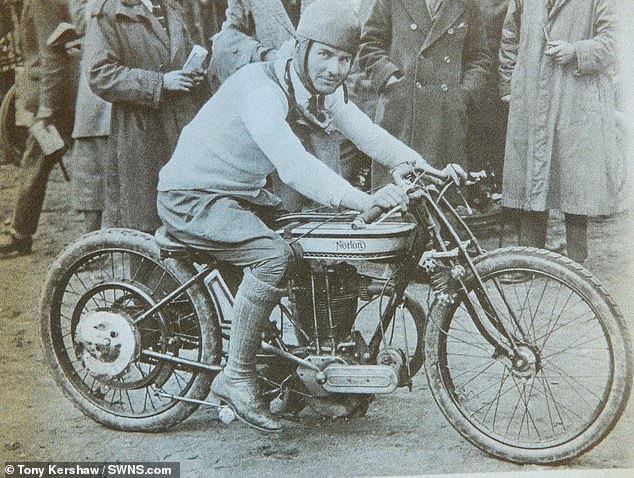 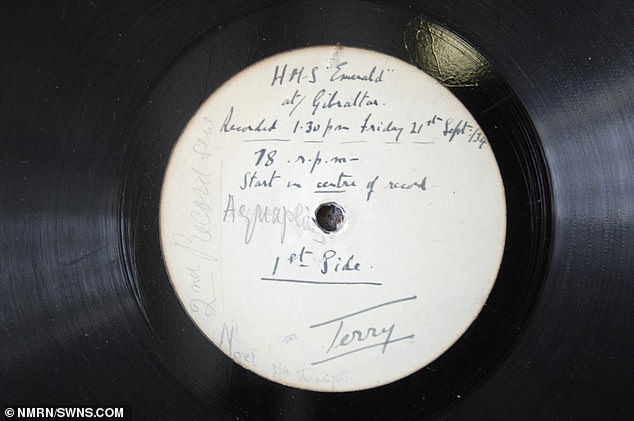 ‘It could have been the ship’s cat howling for all I knew but I thought, “you never know” – you have to try your luck.

‘I was surprised, I didn’t know what I was expecting but it wasn’t that.

‘They don’t really explain anything. He had a signature opening, it was three whistles and that’s how he would open each recording.

‘It was basically just a letter, with what he’s done and what he’s been up to.

‘I was trying to research who Terry Grogan was and happened on an interview with Peter when he said Terry was his uncle, and that was that really.

‘I was delighted to be able to say to Peter that I had those records – it was very good.’

Once Dr Bennett was certain he had found the sailor’s descendant he set about contacting Mr Jefferson to let him know about the records.

To preserve the stories for future generations, the professor arranged to donate them to the National Museum of the Royal Navy in Portsmouth, Hampshire.

He added: ‘These things are important and deserve to be preserved for the nation and the museum has the skills to preserve them.

‘I want these to be available for the public to hear them, they’re not just Peter’s story but also the story of the Royal Navy. 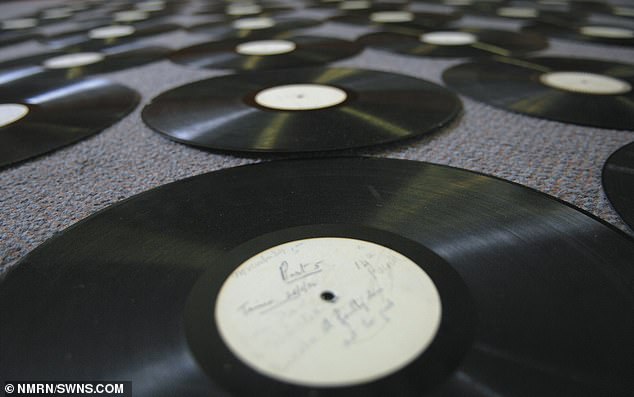 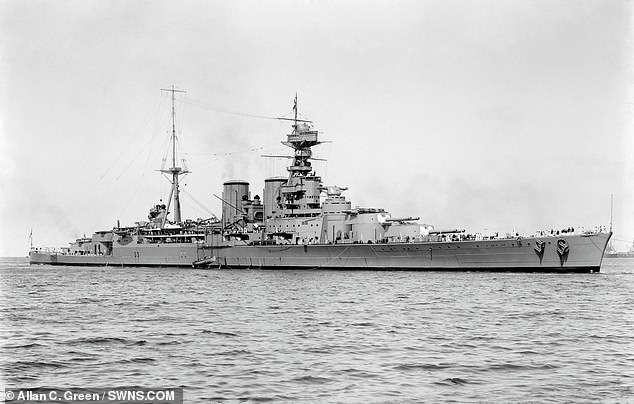 ‘It was definitely worthwhile. Where they’ve been for the past 50 years no one knows.’

Before the records entered the museum’s exhibit, Mr Jefferson was given a private viewing.

He said: ‘I went down to Portsmouth and went to the attic of the museum and they played them to me.

‘It was a shock, I was amazed as you can imagine.

‘Harry has kindly transferred them to a memory stick for me, I’m looking forward to listening to them, I haven’t heard them for many decades.

‘It’s rather nostalgic really, for all I knew they were in a landfill somewhere.’ 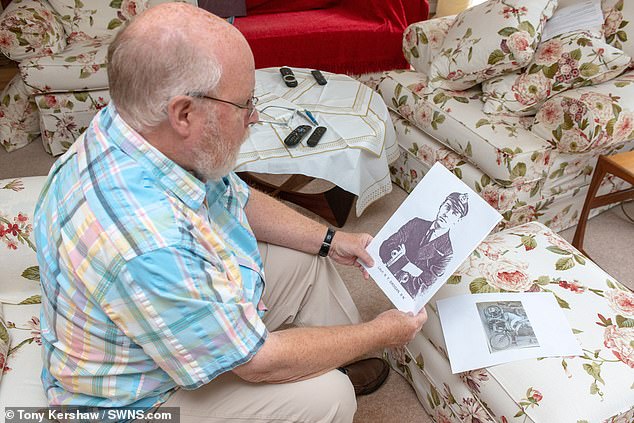 Mr Jefferson was contacted by Dr Harry Bennett, who found the vinyl, after he gave an interview mentioning his late uncle

The sailor recorded his messages using his own personal equipment that he transported with him wherever he went.

Not much is known about the recording equipment, but Mr Jefferson said it would have been an impressive bit of kit for the time.

He said: ‘For the time it was very unusual for a privateer to be doing his own recordings, it’s a bit of kit he got himself and carried around.

‘It was very large and very heavy I should expect.

‘I think he probably used it mostly when he was abroad to keep in touch with friends and family.

‘I’ve wondered about it from time to time – I know it was his own personal device, but that’s all I know.’

DARKEST DAY IN ROYAL NAVY HISTORY: HOW ONE OF BRITAIN’S GREATEST EVER WARSHIPS WAS SUNK IN THE WAR

The loss of HMS Hood, with 1,400 crew was the Royal Navy’s darkest hour.

It was on a remote stretch of the sea between Greenland and Iceland, 75 years ago, that in the last great battleship duel in the history of maritime warfare, Hitler’s Bismarck sank HMS Hood.

She was sent to the bottom on May 24, 1941, as she steamed in to attack the Bismarck and her escort cruiser Prinz Eugen before they could break out into the Atlantic and attack the Allied convoys.

A huge explosion sent a 600ft column of flame and smoke into the sky, and the 40,000-ton Hood broke in half and sank in just three minutes — taking all but three of her 1,418 officers and crew. 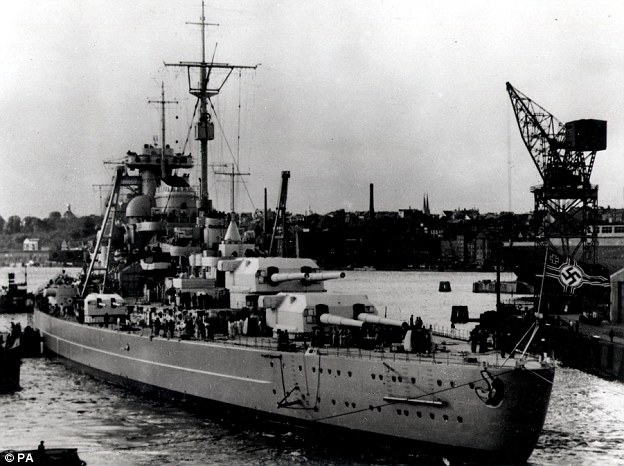 Her last remaining survivor, Ted Briggs, passed away in 2008.

Both in size of ship and number of men killed, she was the biggest single loss in the Royal Navy’s history. The disaster prompted Churchill to issue his famous order: ‘Sink the Bismarck!’ (which happened six days later).

The Hood has lain untouched and largely forgotten nearly two miles down in the cold darkness of the Irminger Basin, taking with her the mystery of why she sank so quickly.

Hopes that she may reveal her secrets were first raised in 2001, when Sussex-based shipwreck expert David Mearns discovered and filmed her remains, scattered over 1½ miles of seabed.

As his remote-controlled underwater vehicle skimmed over the wreck, its lights caught the gleam of the ship’s main brass bell, unscathed amid the devastation.

The wreck is protected as a war grave but, after receiving permission from the British government and the Admiralty, Paul Allen’s August 2015 expedition recovered the bell — the ship’s proudest symbol, used to mark time on board and regulate the crew’s turns of duty.

Sending U.S. troops to Venezuela is 'an option,' Trump says
BAZ BAMIGBOYE: Ballerina Frankie Hayward is the cat that got the cream
The six types of pimple and how to deal with each one
Conor McGregor is arrested following fight with a fan in Miami Beach
Boy suffered four years of abuse after he was removed from school to be 'home taught'
John Barrowman fires back at a 'homophobic' man who called him a 'poof' in a VERY heated exchange
Juan Mata and Marouane Fellaini came to Jose Mourinho's rescue again in Juventus comeback
Flight attendant reveals secrets about flying - including why you should NEVER order tea or coffee