Sainsbury’s has been accused of ‘lazy, casual racism’ by furious readers after it advertised a recipe for ‘Persian curry’.

The supermarket giant featured a recipe for a so-called ‘Golden Persian Curry’ on the front cover of the October edition of its in-store magazine.

But the dish sparked fury among some readers who labelled it a poor attempt at traditional Persian cuisine, who pointed out it featured ingredients that ‘no Iranian will ever mix into a stew.’ 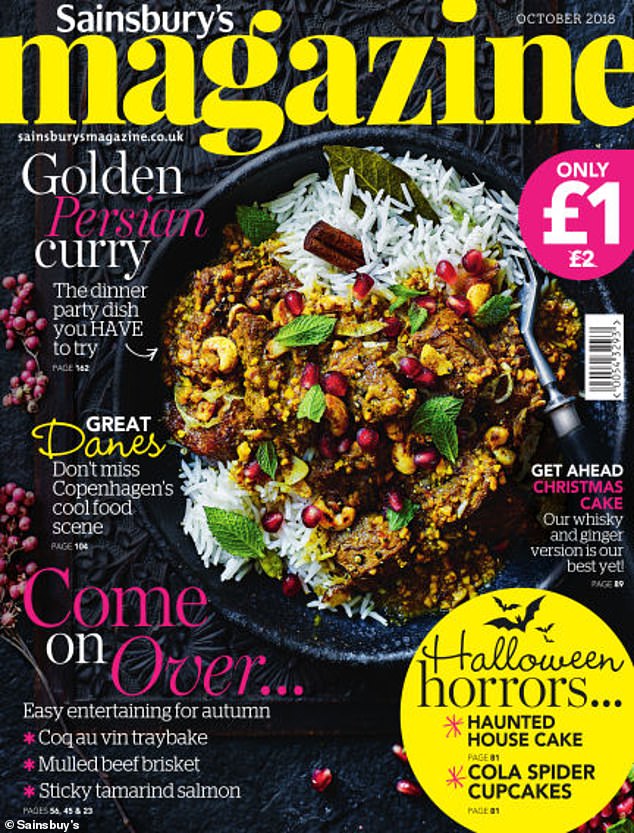 Readers took to social media to share their outrage after spotting the recipe on the magazine.

Zoe Margolis said: ‘How they thought that the incredible flavours of fesenjan could be ‘fused’ with ‘Indian-style curry’ beggars belief.’

Twitter user Rezvani added: ‘Although generally open minded, I read thru this idiotic recipe in horror!

‘Regular curry dish (which is well known to anyone in UK and available all over the country in various forms and iterations) doesn’t become a “Persian khoresh” by throwing in a few pomegranate seeds on top!

‘The article assumed similarities between Indian curry cuisine (popular in UK) and Iranian cuisine (little known) where none exists.

‘Trying to promote Iranian cuisine using what’s already familiar to their readers. If you don’t use a Persian recipe, can’t call it a Persian dish!’ 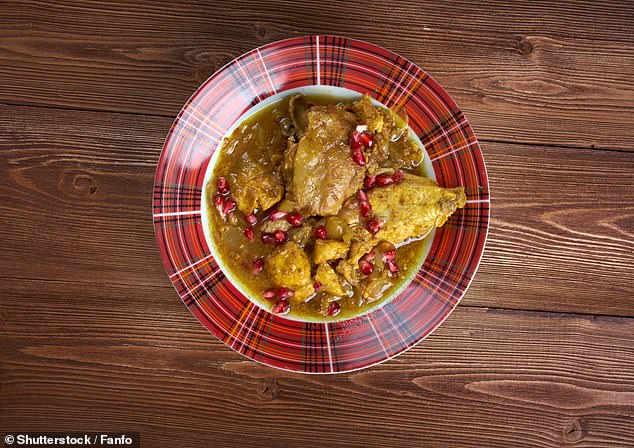 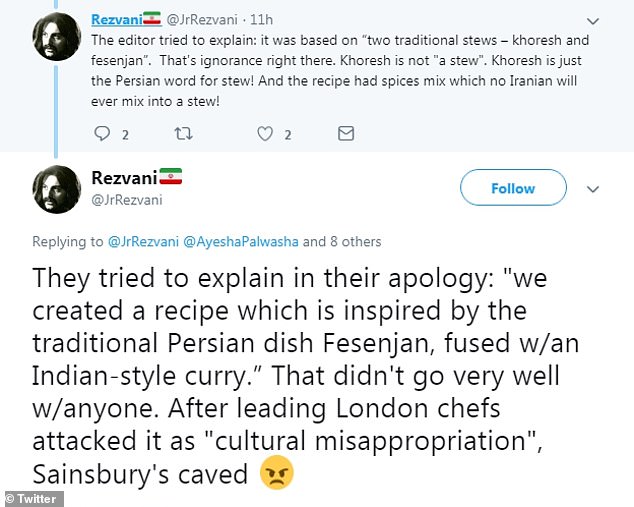 Twitter user Rezvani said: ‘Although generally open minded, I read thru this idiotic recipe in horror!’

Persian stew, or Fesenjan, is made using pomegranate molasses, ground walnuts, cinnamon, chicken and stock, combined with other ingredients to make a savoury curry.

She told The Observer: ‘To treat Iranian and Indian cuisines as virtually indistinguishable, despite knowing in reality they are very different, in order to save their readers the effort to learn about a new Iranian cuisine which the magazine wants to promote on its front cover smacks of lazy, casual racism and is abhorrent.’

In August, Jamie Oliver was accused of cultural appropriation by Labour’s shadow women and equalities minister and other social media users for launching ‘punchy jerk rice’.

Dawn Butler, the MP for Brent Central in north west London, suggested Oliver was using the word jerk to increase the sales of his rice and his product was not faithful to the original Caribbean recipe which is usually a marinade for meat.

The Labour MP also suggested father-of-five ask Levi Roots, the creator of jerk barbeque sauce Reggae Reggae sauce, to teach him about it.

‘It’s not just a word you put before stuff to sell products. @levirootsmusic should do a masterclass. Your jerk Rice is not ok. This appropriation from Jamaica needs to stop.’

Vatican defrocks top US cardinal McCarrick over abuse allegations
Switzerland vs England - Nations League play-off: LIVE score, lineups and updates
How Beatrice the Contessa is marrying into a family much posher than her own
October heatwave sees temperatures soar but in the Rockies one woman films herself jumping into snow
Bond Girl Eva Green argues AGAINST having a female 007
Adele has never looked more stunning...how life after marriage is clearly suiting the singer
AL wild-card game scores big ratings for TBS
Caravan migrants arrive in Mexico City, bed down