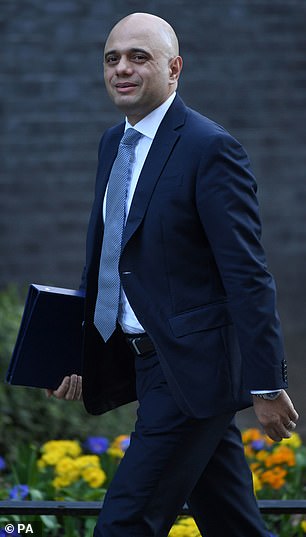 Sajid Javid yesterday demanded extra money for police forces and wider use of stop and search to combat the surge in knife violence.

In a major intervention at Cabinet, the Home Secretary launched an impassioned plea for millions of pounds so forces can put more officers back ‘on the beat’.

And he urged the Prime Minister to sign off proposed new powers to make it easier for police to stop and search those suspected of carrying blades.

Sources said Mr Javid and Mrs May had a ‘lively’ exchange as she defended changes she made as home secretary which resulted in sharp falls in the use of stop and search.

Attempting to get on the front foot over the issue after a spate of horrific crimes, Mrs May ordered an urgent set of ministerial meetings to address action against knife crime.

But she was contradicted by Britain’s most senior police officer over her rejection of the link between police numbers and the rise in violent crime.

On Monday, Mrs May insisted there was ‘was no direct correlation between certain crimes and police numbers’. 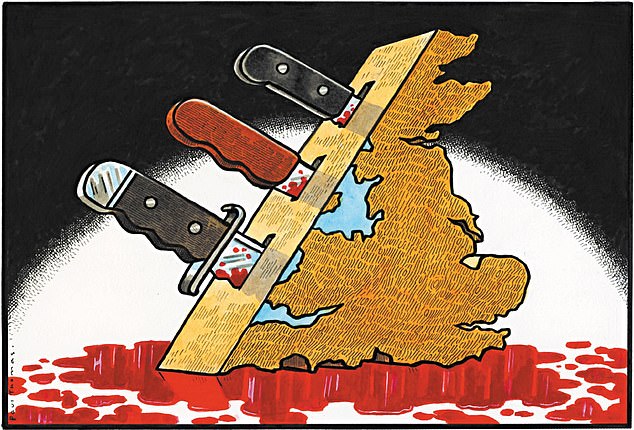 In an interview with LBC, Miss Dick said: ‘In the last few years, police officer numbers have gone down a lot, there’s been a lot of other cuts in public services, there has been more demand for policing.

‘I agree that there is some link between violent crime on the streets obviously and police numbers, of course there is and everybody would see that.’

Her comments will put huge pressure on No10 and Chancellor Philip Hammond to prioritise police funding in the coming months.

Mr Javid is agitating for more money despite increases in the police precept – the amount added to council tax to pay for local forces – which will boost funding by nearly a billion pounds this year.

That is the biggest increase in police funding since 2010. 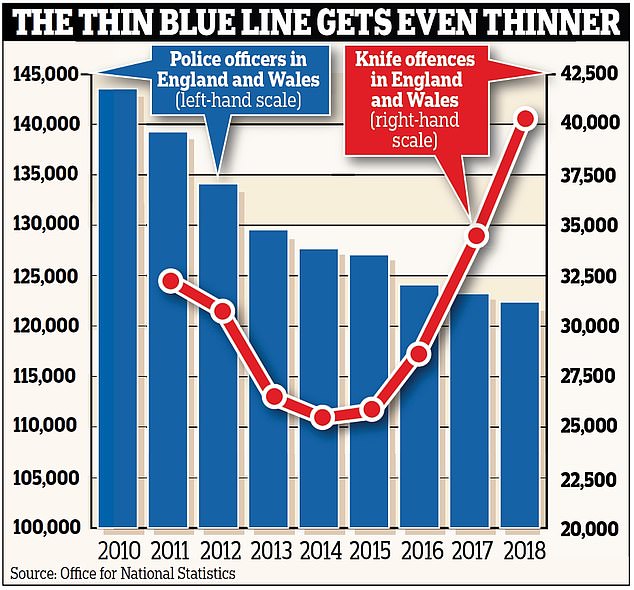 His allies hope for an immediate funding boost in Mr Hammond’s Spring Statement next week, and to secure a sustained increase in this year’s Spending Review, which will decide future budgets for departments.

Opening Cabinet yesterday, Mrs May said the killings of teenagers Jodie Chesney and Yousef Makki at the weekend were ‘absolutely appalling’ and told Ministers her thoughts and sympathies were with their families.

The Prime Minister has now asked the Home Office to co-ordinate an urgent series of Cabinet-level ministerial meetings in the coming days.

Mrs May said the problem would require ‘a whole-of-Government effort, in conjunction with the police, the wider public sector and local communities’.

But Mr Javid complained that current funding levels for the police ‘don’t go anywhere near far enough’. He said a police presence on the streets gave confidence to communities and put off criminals. 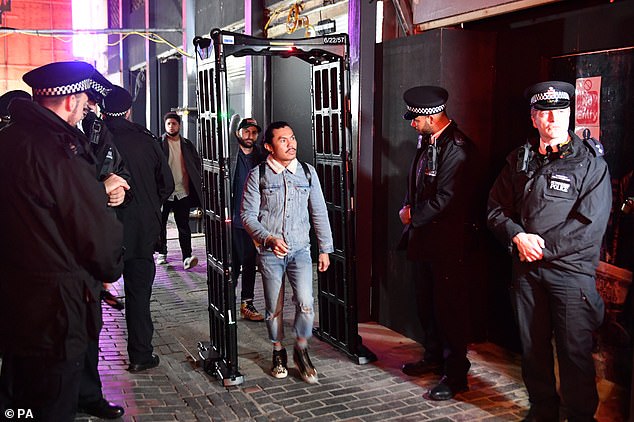 A man goes through a knife arch today that has been set up by Metropolitan Police officers on Walker’s Court in London, between Piccadilly Circus and Oxford Circus Tube stations

Meanwhile, violent crime rose by nearly a fifth in the year to September 2018, according to police figures, and the increase in knife killings has been particularly pronounced.

In the last year alone, 27 under-19s have been stabbed to death, and there have been 285 knife killings in all – the highest level since the Second World War.

Mr Javid also argued that officers do not feel they can use stop and search powers and need political backing to do so.

But Mrs May defended her approach when she was home secretary, arguing her reforms stopped the police carrying out illegal searches. 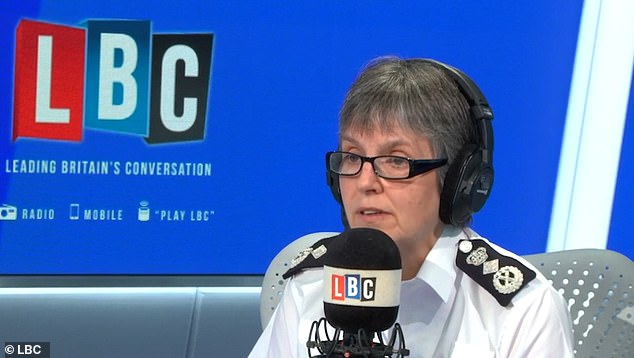 Last night officers were seen using a metal-detecting arch in Soho, London, in a bid to catch anyone carrying a concealed weapon.

Miss Dick also yesterday refused to rule out calling in the Army to help restore order to the streets of London, although she said she found it ‘hard to imagine’ she would want to do so.

‘I think we all need to work together on this and if there are things that the military would offer for us then of course I would think about it, not to carry out policing functions but other supplementary functions,’ the Scotland Yard Commissioner said.

Last night Defence Secretary Gavin Williamson said the armed forces ‘always stand ready to help any Government department’ but that his department had not had any requests for assistance.

‘Obviously our thoughts and prayers are with the family and friends of those who have lost someone,’ he said. 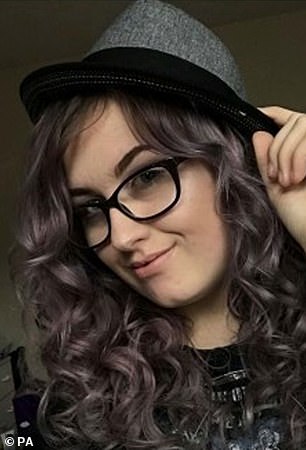 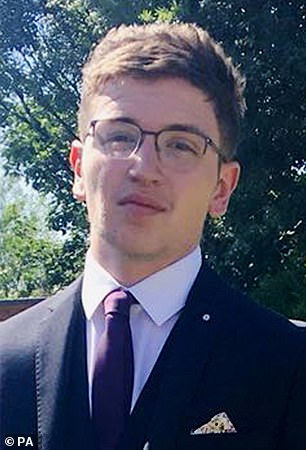 ‘I know that the Home Secretary is looking very closely at how he can ensure that everything is done to tackle this problem at the moment.’

Treasury sources said there had been no formal requests for more money from the Home Office.

Among those attending will be senior officers from seven forces most affected by violent crime – the Met, Merseyside, Greater Manchester, West Midlands, South Wales, South Yorkshire and West Yorkshire.

Cruise ship collides with a tourist river boat and a dock on a busy Venice canal
Three American mothers and at least six of their children are killed by Mexican drug cartel gunmen
Swaggering in handcuffs, smirking speedboat killer finally surrenders
Coronavirus UK: The Queen will self-isolate at Windsor Castle
Wedding guests tackle gunman who opened fire during ceremony in New Hampshire church
Mega Millions jackpot jumps to $970M as drawing approaches
AMANDA PLATELL says Marina Wheeler was steadfast in her support despite being tried to the limit
Couple plan dream life on the sea after buying criminal's multi-million pound super yacht