Sajid Javid said he is not planning to change house buying rules so sellers have to pay stamp duty instead of buyers.

It comes after the Chancellor hinted he would make home sellers pay stamp duty in a boost to first time buyers yesterday.

The switch would have meant mean first-time buyers avoiding paying the tax and helping families looking to buy larger properties.

But the shift would have meant bigger tax bills for property owners looking to downsize. 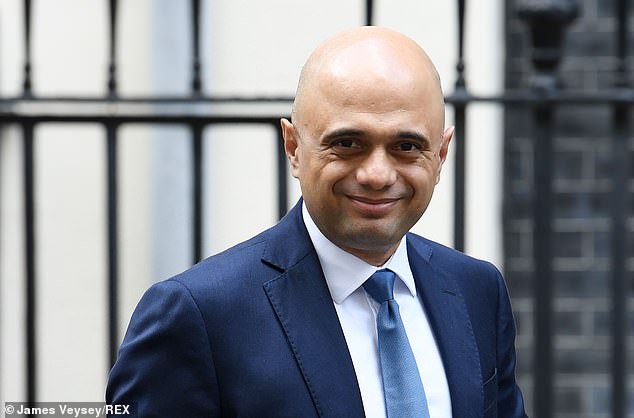 In a tweet today, he said: ‘More speculation about stamp duty this morning.

‘To be clear I never said to @thetimes I was planning to put it on sellers, and I wouldn’t support that.

‘I know from @mhclg that we need bold measures on housing – but that isn’t one of them.’ 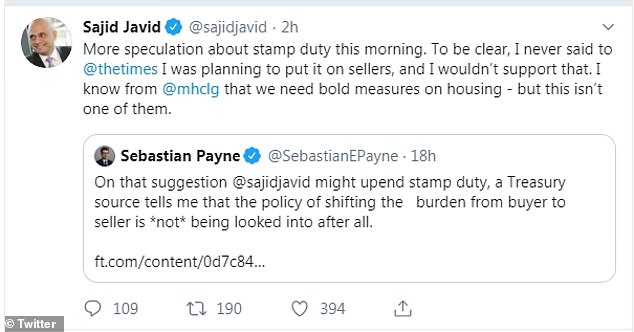 ‘I wouldn’t be doing my job if I wasn’t thinking seriously about how do we use [that opportunity],’ he told The Times.

Asked about taxes for higher earners, he said: ‘Wait and see for the Budget. But it wouldn’t be any surprise that I think taxes should be efficient.

‘We want to set them at a rate where we are trying to maximise revenue, and that doesn’t always mean that you have the highest tax rate possible.’

Mr Javid said he had yet to decide whether the Budget will be before the October 31 Brexit date.

Government 'will introduce China travel ban in a week':
Rebecca Humphries’ mother Anne is in 'shock' over Strictly's Seann Walsh kiss with Katya Jones
Billionaire Warren Buffett dismisses Brexit fears and is 'ready to buy something in UK tomorrow'
Who is Keeley Hawes? Bodyguard actress revealed amid on-screen death rumours
How Yeoman Warders lived with their families inside The Tower of London in 1951
Wheelchair bound man and his wife hit back at trolls who attacked their 'interabled' relationship
Man, 38, charged with drone flying near Heathrow days after scare at Gatwick grounded 1,000 flights
Chernobyl cover-up: Soviets knew for 10 YEARS that reactor was an accident waiting to happen